August is National Family History Month. In 2019 we celebrated by sharing some our best tips and tricks for researching your family history through blog posts, webinars, our new family history newsletter and our social media accounts. To round off the month, we thought we would share some of the fun stories we have learned about our own families. As it turns out, our librarians have quite a few interesting stories to tell…

I am descended from a family of fine cricketers, though I will not pretend to have inherited any of their talents. My grandfather, John ‘Max’ Stuckings, was a renowned fast bowler and even played a few games for the NSW Country side against Richie Benaud in the 1940s.

I remember a story told to me as a lad by my ancient aunts that Pop’s father, John ‘Jack’ Stuckings, once hit a cricket ball into a pub and knocked a bottle of whisky off the shelf. I had thought they were pulling my leg, but thanks to Trove, I’ve found various newspaper reports of that very incident taking place in the tiny Hunter Valley village of Vacy in November 1922.

Not only was the story printed in the local rag (Maitland Mercury), but it was picked up by at least a dozen other papers across 4 states including the Sydney Sun. ‘CRICKET BALL FINDS A DRINK’, ‘A SENSATIONAL STROKE’, ‘A PROHIBITION HIT’, they trumpeted. We also know that Jack's 27 runs made him the top-scoring batsman that day, while his Allynbrook teammates F. J. White and W. Boydell took 3 for 10 and 4 for 10 in two overs of bowling each. The articles never said who bought the drinks after the game. 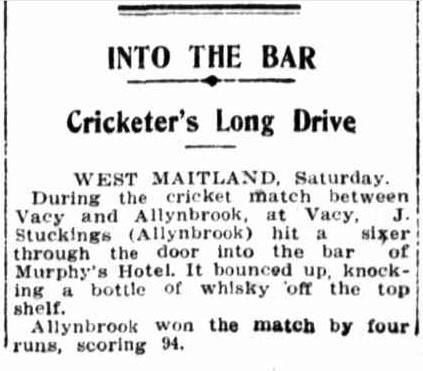 Every now and again there is a story that tickles the funny bone. I was surprised to find such a story in my family and even more amused to find it had been reported in many Australian newspapers.

While searching Trove, I found my gem of a story in The West Australian Christmas Eve edition in 1902. It centred on a dispute between my great-great grandfather Edward (Ted) Jewell and his neighbour over Ted’s tuba playing. Many of us can relate to the ‘discomfort’ experienced when hearing someone practice on piano or violin. That feeling would probably multiply if you are forced to listen to the ‘oompa loompa’ baritone sounds of the tuba.

The eye-catching headlines read ‘Alleged Attempt to Kill at Subiaco’, ‘Attack on Musical Neighbour’ ‘Music Hath Charms’ and ‘Could not stand the double-bass’. The articles were just as entertaining, with descriptions of how Ted’s neighbour threatened to end Ted’s life with an axe if he didn’t stop playing his tuba. They were embellished with descriptions of the defiant Ted provoking the neighbour into murderous swings of an axe, missing Ted but destroying the tuba.

Ted’s tuba was replaced and he continued to play in the Subiaco Brass Band for many decades. In 1945, at the age of 78, the Daily News Perth claimed he was the oldest bandsman alive! 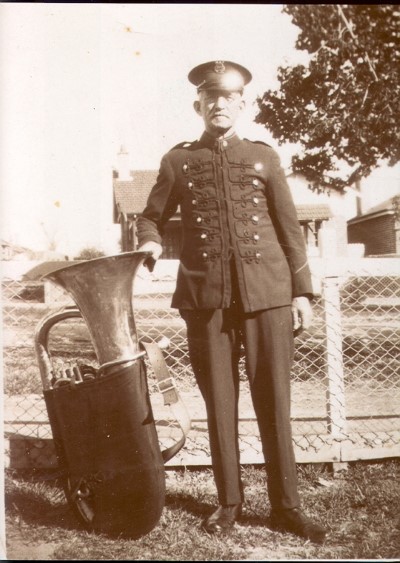 When I was younger, my great grandmother use to tell me stories of how she went to school on a horse and cart. Years later, an archaeological dig revealed that there was an old school house in the Googong area.

The old school house was found on the neighboring property owned by James Brown. This explained the distances traveled and how they could easily visit other homesteads. Looking at historical maps brought my great grandmother’s stories to life. 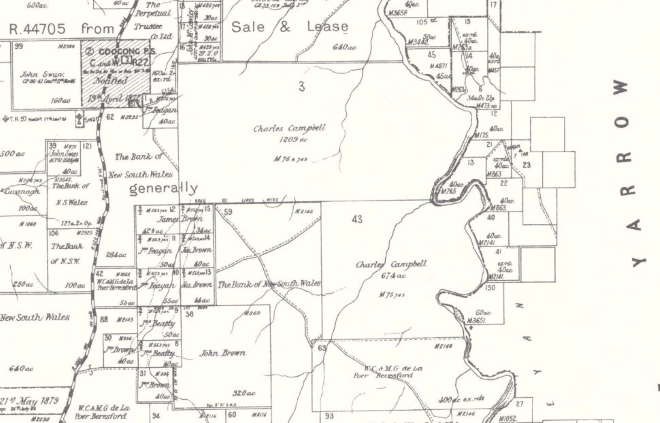 Thomas Cornelius Cole (1810-1889) migrated from Middlesex UK to Melbourne in 1842, and along with his brother and cousin established series of orchards, nurseries and market gardens. He wrote a book in 1860, Cole’s Gardening in Victoria, which I found in our collection. He was quite prominent in horticultural circles, working hard to adapt plants to the Australian environment, and frowned on the idea of lush green grass lawns in such a climate.

His son, Thomas Cornelius junior (1836-1879), my great-great-grandfather, was an Anglican reverend but also engaged in the family horticultural practice.

Over the years these establishments expanded and were taken over by the next generation, and then the next. Business directories list the nurseries and provided a web of father, son and cousin names to follow. But by the early 20th Century the properties were being sold off to housing developments.

In November 1935 one of the last parts of land in Hawthorn, which included what was described as a “mansion” that had been leased as a mental asylum, was sold to have a road put through, called Cole Street. But when the building was demolished the following year, it released a population of rats that caused such a concern that the council voted to deploy the health inspectors to report.

Perhaps luckily I did not inherit a rat infested mansion in Hawthorn, but neither did I get my forebears green thumbs. But the thought of having a lasting signpost connecting my family to a small part of Melbourne is quite a thrill.

My mum is the historian in our family. She has managed to dig up a considerable amount of information about our family over the years using BDM records, Trove newspapers and good old-fashioned detective work. One of the more interesting discoveries she has made is about my paternal great-great-great-great grandparents, Samson Cameron (1811-1891) and Cordelia Cameron (1809-1892), who were actors by trade and are credited with introducing professional theatre to Hobart and Launceston.

They migrated to Hobart Town in 1833 and set up a theatre in Freemason’s Tavern. Their first performance was held on Christmas Eve 1833; Kotzebue’s The Stranger, followed by the farce The Married Bachelor as an after-piece. The play was very well received; many reviews of this performance were available to read in Trove’s collection of digitised newspapers. After a successful season (including classic plays such as Shakespeare’s Othello and The Merchant of Venice) the Cameron family moved to Launceston to establish another theatre, this time in The British Hotel. Like in Hobart, their debut performance was of The Stranger on the 5th of June 1834.

Sadly, I did not inherit Samson and Cordelia’s theatrical and musical talents. However, I do have a connection to my 4 x great grandparents that I was unaware of until recently.

The venue the Camerons performed in, Freemason’s Tavern, still exists to this day and in 1997 was renamed The Welcome Stranger, in reference to their debut performance of The Stranger. I actually visited The Welcome Stranger back in 2012 whilst in Hobart for a conference, when my colleagues and I went out for a post-conference drink. I had no idea at the time that I had stumbled upon my ancestor’s old theatre – what a small world! 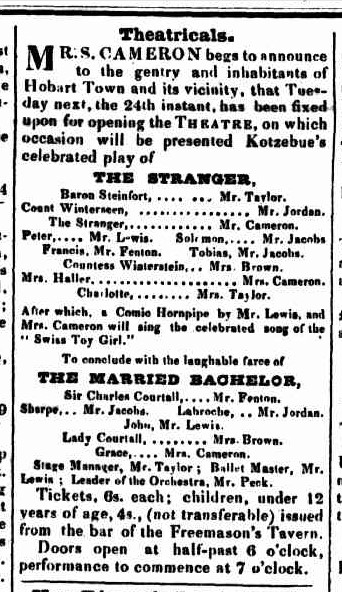 I had always thought my family was strongly of Scottish descent (McLean and Inglis), with some Irish convict (Flynn) and some Pendergasts and Bellamys thrown in for good measure. However, some recent surprising research discoveries have shown me that there is an American connection as well.

My mother has always spoken of her Great Uncle William Pender Mclean (b 1862 - 1926); journalist and newspaper editor (locally and abroad, including becoming editor of the Hong Kong Telegraph and closer to home the Inverell Times) international traveller, grazier (not that successful apparently), jockey (winner of a magnificent silver trophy from a successful race in Hong Kong), small business owner and participant in WWI. She had no knowledge of any marriage he may have made, however recently I discovered that he was married not once but twice (frustratingly neither wife named in his obituaries).

The fact that his first wife, Mary Dunlop Johnson, was American shouldn’t have surprised me given his base in America for some time as editor of The tobacco leaf. What did surprise me however was that as well as being a writer and journalist, she was a founding editor of The Crisis from 1909 until her death. The significance of The Crisis (which is still being published today)is that it is the official magazine of the National Association for the Advancement of Colored People (NAACP). According to the website of the NAACP it is:

“… a quarterly journal of politics, culture, civil rights and history that seeks to educate and challenge its readers about issues facing African-Americans and other communities of color.”

Mary Dunlop Johnson was born in the Bahamas, in 1873. She became a journalist writing for both The Crisis and The New York Times on topics as various as earthquakes and lynchings. She married my uncle in 1896. Sometime after they appear to have separated and she sadly died from surgery complications in 1912. She was eulogised in The Crisis in August that year.

There is obviously a lot more to uncover about this remarkable woman and her relationship to my family. 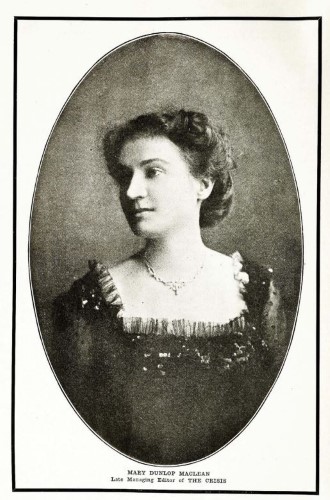 Even though National Family History Month is over for 2019, our team of librarians are here to help you discover your family's story. All you have to do is Ask a Librarian.