Most of us have a Grimm story or two tucked away in our memory. As children, Cinderella’s magical makeover from a soot-covered servant to a heart-stopping beauty enchanted us, and we gasped in horror at the fattening of young Hansel for a witch’s oven.

However, what about The Hare and the Hedgehog? This variation of Aesop’s The Hare and the Tortoise, features a conceited hare getting its come-uppance from a humble hedgehog. It first appeared in a volume of fantasies and fables, Children’s and Household Tales (1812), collected by the Grimm brothers Jacob and Wilhelm. The Grimms’ views merged well with European concern about children’s education and moral training. They adapted their stories into a collection suitable for children. They supported bourgeois values such as class hierarchy and patriarchy. A late-nineteenth century English translation of The Hare and the Hedgehog laid down firm boundaries of class, ethnicity and female subservience, religious references and finger-wagging morality - enough to send a shudder through today’s secular and more egalitarian audience.

So why would anyone consider the National Library’s version of The Hare and the Hedgehog a treasure?

The Library’s copy of this tale isn't the 19th-century version. It's one of a set of little books issued by the detergent company, Surf, to accompany their products. It has no identified author. It belongs in the Marcie Muir Collection, amassed by pioneering bibliographer of Australian children’s literature, Marcie Muir (1919-2007). Muir collected 7,600 volumes of children’s books by or about Australians. The Surf books are available in the Special Collections and Main Reading Rooms at the Library, and will reward readers with much enchantment.

The Hare and the Hedgehog may not have the fame and lasting popularity of May Gibbs’s The Complete Adventures of Snugglepot and Cuddlepie (1940), nor the foundational qualities of Ethel Turner’s Seven Little Australians (1841), both of which feature in the Library’s free exhibition, Story Time: Australian Children's Literature, open until 9 February 2020. 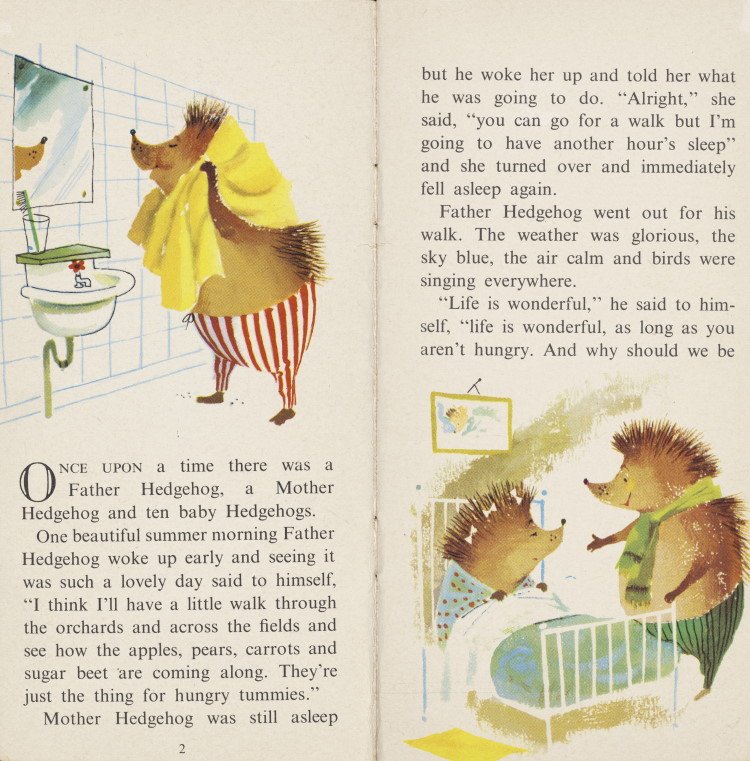 However, there are many aspects of the Library’s Hare and Hedgehog which I find endearing: its diminutive size, its thin pages, the feel of its flimsy cover. The exuberant yet subtle artwork shows expressive faces and gestures, and a bright but restrained colour palette. The modification of an older tale into one where moralising and religious overtones have faded away is appealing. Male domination and female submission are almost absent. What remains is a buoyant, cleverly crafted story in which a bully’s intended victim outwits him through a shrewd reading of human nature, and the bully succumbs to his own arrogance.

Holding this little book feels just the right size for a child’s hands. It’s possible to see how early reading can offer young minds new ways of seeing the world. Problems can be solved, bullies outwitted, and underdogs win through; all achieved with gentle good humour. Like a fairy tale, the transformation of an antiquated folk story into a modern, inspirational version is something to treasure. In the palm of one’s hand are the ingredients for a lifetime of imagination and regeneration.

Note: An earlier version of this article appeared in the June 2018 issue of the National Library of Australia's Unbound magazine.