Doctor Who turns 56 this Saturday, the 23rd November. It’s a TV show many people hold dear to their hearts so I thought it would be fun to take a trip through the space/time vortex that is the National Library of Australia’s catalogue and find some Who related material we have in our collection.

When I began my research, I thought it would be good to emphasise the Australian connections to the show (whilst also looking at some other goodies too). I knew that from the outset many Australians had been involved in the program. For instance, the theme tune was composed by Australian Ron Grainer; the very first episode was written by Australian Anthony Coburn; many Australian actors including Ray Barrett, Janet Fielding and Kylie Minogue have appeared in the show; and the 20th anniversary special, The Five Doctors, was a co-production with the ABC.

Here at the NLA, we have the sheet music to the Doctor Who Theme composed by Queenslander, Ron Grainer. The theme music is haunting, partly a result of its repetitive, throbbing bass motif. It’s a great piece of music and an excellent addition to our Music collection. The cover art is especially striking, printed in vibrant black and green. 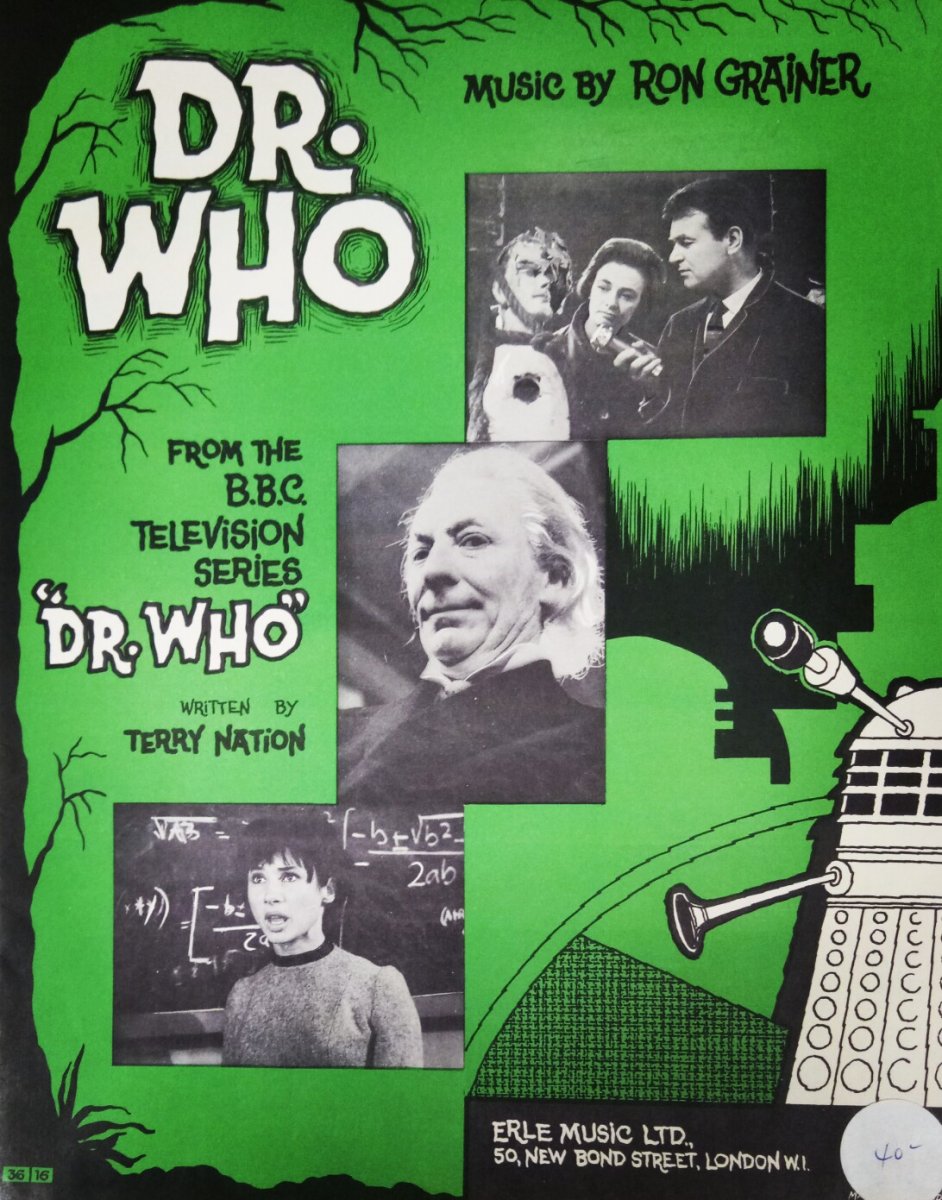 The NLA has a lot of material relating to Tristram Ogilvie Cary, an English-Australian composer, pioneer of electronic music, co-designer of the VCS3 synthesiser and former music critic for the Australian. He was also the musician who was responsible for the eerie, musique concrète score to Doctor Who episode The Daleks (1963), and various other early Doctor Who stories. His music added immensely to these programs - my strongest memories of the first Daleks episode are of the menacing Daleks themselves and of Cary’s music, which was incredibly strange and unsettling, and which seems even stranger to me now than it did when I first heard it. It’s remarkable stuff.

In our Reference Collection in the Main Reading Room you can find his Illustrated Compendium of Musical Technology (1992), a text containing entries on a broad range of topics including analogue synthesis techniques, microphones, sound recording techniques and more. In spite of its age, it’s a good resource for anyone going into a recording studio.

In our collection we also possess the Papers of Tristram Cary, including music scores and reel to reel tape recordings. Within the collection there is material relating to his Doctor Who compositions and his work on Quatermass and the Pit (a BBC production which was influential to the early development of Doctor Who).

The first television ad campaign to promote computers in Australia 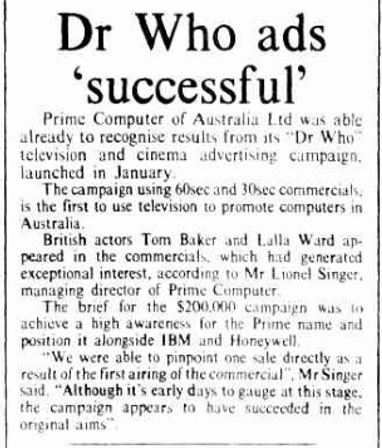 Looking through the newspapers on Trove I found this article in the Canberra Times. In 1980, Tom Baker and Lalla Ward featured in a series of promotional ads for Prime Computer Australian as their characters from Doctor Who. You’ll notice that the Canberra Times claims this was Australia’s first ever television ad campaign to promote computers which makes it quite historic. I don’t know what it says about Australian culture that we had British television stars promoting an Australian computer company, but I remember these ads fondly.

"New Dr Who could be a woman"

Back in 1980 the Canberra Times reported on its front page that the BBC announced a woman might be on the list of possible replacements for the title role in Doctor Who. It look a long time for this to finally happen with Jodie Whittaker taking the role in 2018, but articles like this suggest that it had been in the minds of the production staff quite early on. 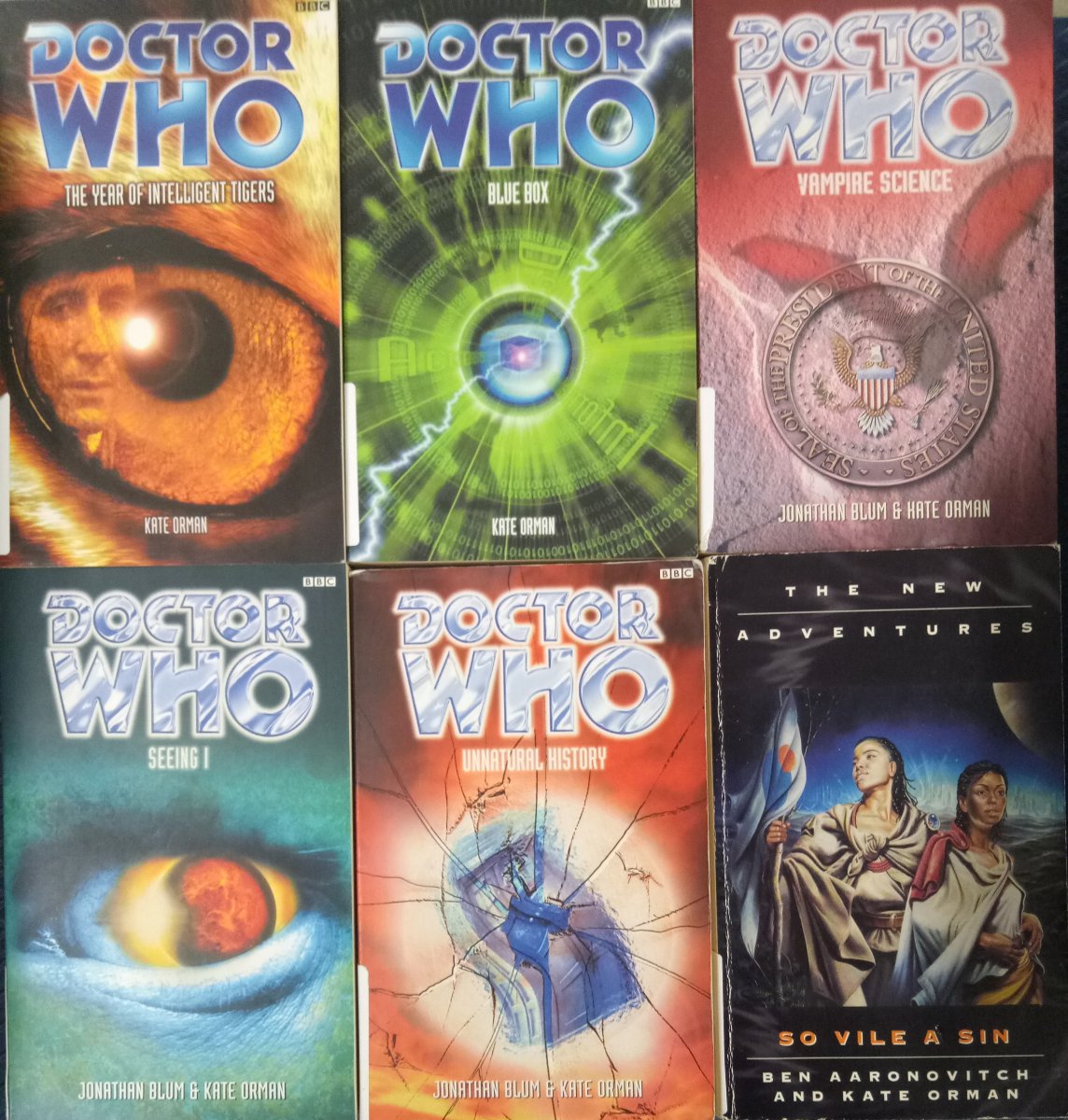 Clockwise from upper left: The Year of Intelligent Tigers, Blue Box, Vampire Science, So Vile a Sin, Unnatural History and Seeing I.

After the program’s cancellation in 1989, a market for Doctor Who material in other formats developed. I find it really interesting that if a TV program is successful a little publishing industry will develop around it. Doctor Who has always had tie-in books, but once the show was no longer being produced the demand for Whovian novels increased substantially.

Australian author, Kate Orman, published several Doctor Who novels from 1993 to 2003 (including a few with her husband, Jonathan Blum, and one with notable fantasy author, Ben Aaranovitch), all of which are in the National Library’s collection. Kate Orman was quite active in Doctor Who fandom, including being president of the Doctor Who Fan Club of Australia. It’s great how this sort of enthusiasm for a subject can, for some, develop into a professional career. The Encyclopedia of Science Fiction (3rd edition, Ed John Clute, David Langford, Peter Nicholls and Graham Sleight) says of Orman “she was the first female writer to become significantly involved in the The New Adventures subrealm of the vast [Doctor Who] franchise, and is widely respected for her wit and competence.” 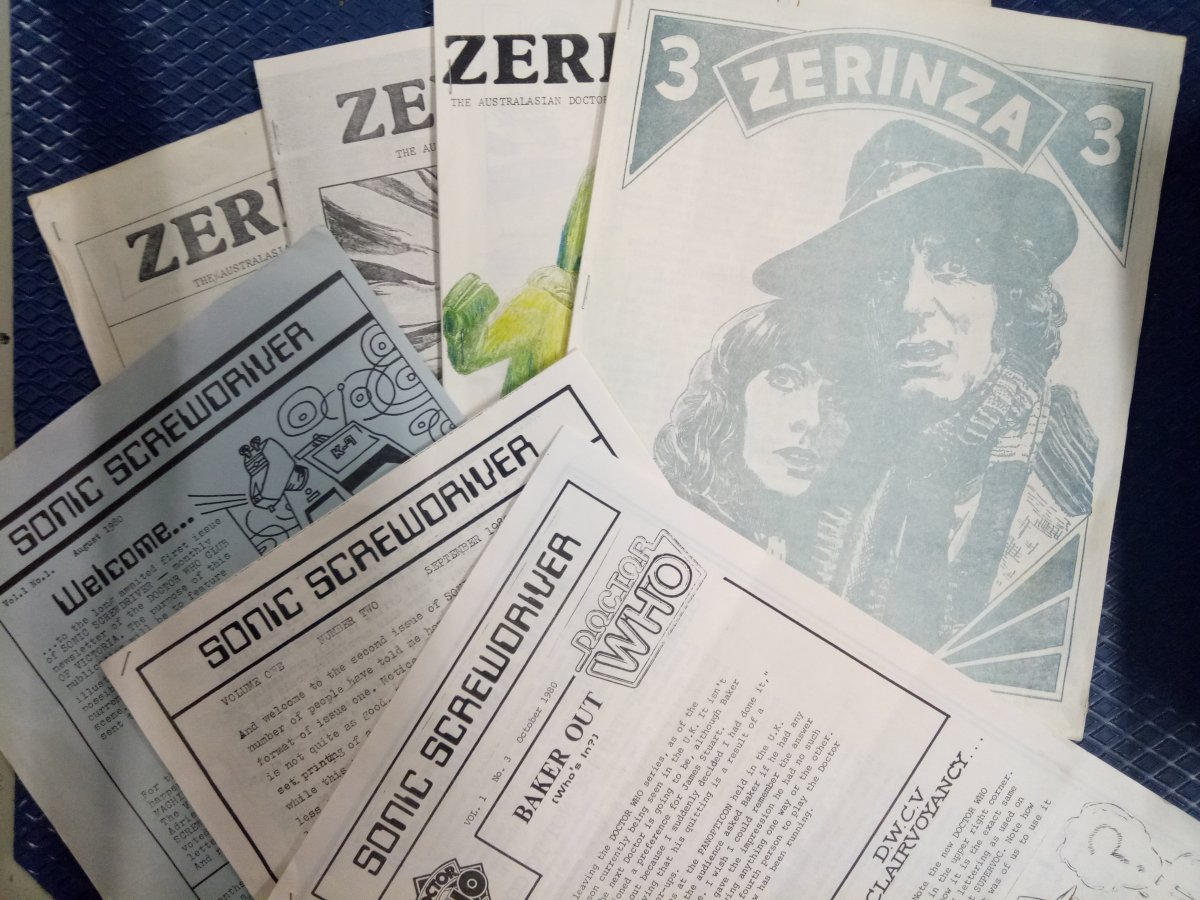 When looking at the archaeology of a television program, studying publications made by fans can be illuminating. There are quite a few Australian Doctor Who fanzines in the collection, including titles such as Zerinza: the Australasian Doctor Who fanzine, Sonic Screwdriver (the newsletter of the Doctor Who Club of Victoria), Kenowa: Doctor Who International Fan Club (Australasia) club fanzine plus many more. These zines are testament to the devotion and commitment some people have to the TV show. 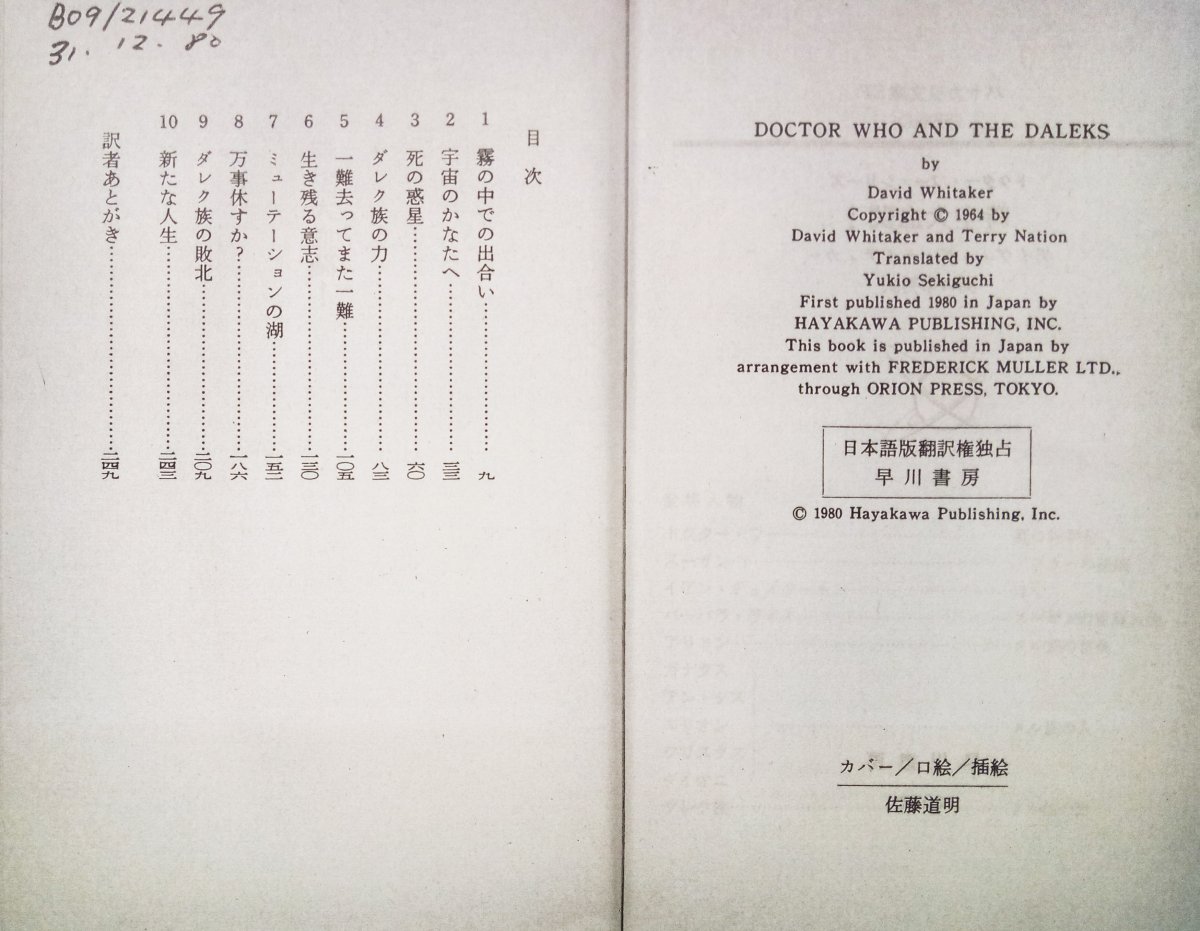 Lastly, these Japanese Doctor Who translations aren’t Australian, obviously, but I was delighted to find that the NLA had them in the collection, so I had to include them in this blog. Not only is it cool that these novels have been translated into Japanese (which indicates how a program like Doctor Who has a truly global appeal) but it’s even cooler that they have really nice illustrations that bear little or no resemblance to the TV program at all. I presume that for copyright reasons the publishers weren’t allowed to use visual material as reference for these novels, so the illustrator has totally redesigned the Daleks, the TARDIS and in one instance has drawn Jon Pertwee’s Doctor Who wearing a deerstalker hat à la Sherlock Holmes.

These wonderful translations include:

As well as Doctor Who, the translator responsible for these novels, Yukio Sekiguchi, has translated several books by Australian science fiction writer A. Bertram Chandler, which are also are in our collection.

If you would like to access Doctor Who related material in the collection, you can go to our catalogue and start searching. In order to request material you will need to get a library card if you don’t already have one. You could also try searching through our online newspapers on Trove for TV listings and news articles related to the program. My good colleague and fellow traveller through time and space, Alex Cameron, has compiled a User List of these items and of some other Doctor Who material that can be found in the NLA’s collection.

I hope you’ve enjoyed this little foray across the fourth dimension. Happy birthday Doctor Who.