National Library of Australia Fellowships provide an opportunity for researchers to explore the Library’s collection, blissfully uninterrupted, for up to 12 weeks.

Dr Daniel Midena is an Honorary Research Fellow within the Institute for Advanced Studies in the Humanities at the University of Queensland specialising in the history of European missionaries, anthropologists, and legal systems within German and British colonies (New Guinea, Fiji and the Solomon Islands) in the nineteenth and twentieth centuries.

He is a 2019 National Library of Australia Fellow supported by the Stokes Family. His Fellowship presentation, A History of Medicine, Christianity and Sorcery will be presented on 10 December 2019 at the National Library and live streamed on the Library’s Facebook page.

Dr Daniel Midena examines the historical encounters between modern medicine and New Guinean beliefs and practices with assistance from the biography of Edwin Tscharke (1918–2000), a medical missionary on Karkar Island in the late twentieth century. Tscharke was one of the most influential medical missionaries in the Pacific after 1945. He devoted considerable energy to thinking and writing about how to disabuse locals of their belief in ‘sorcery’.

In this blog, Dr Daniel Midena explores the life and work of Protestant missionary Edwin G. Tscharke, and the relationship between Christianity and sorcery in the South Pacific. He writes:

Scientific knowledge and practices have played a complex role in the history of Christian missions in the South Pacific – as in other colonial contexts. In the course of my research into the history of science and mission in the South Pacific, my interest in the Lutheran medical missionary Edwin (“Ed” or “Ned”) Tscharke (1918-2000) was initially sparked by a booklet he wrote, entitled A Guide to Better Health and Hygiene for Third World Countries (1993). The booklet aimed to educate people in ‘Third Word Countries’ about modern biomedical understandings of health and medicine through cartoons and ‘simple English’ texts. It contained short chapters on topics such as ‘The Cell’, ‘The Microscope Story’, ‘Organs’, ‘Yaws’, ‘Hookworm’, and ‘Aids’. 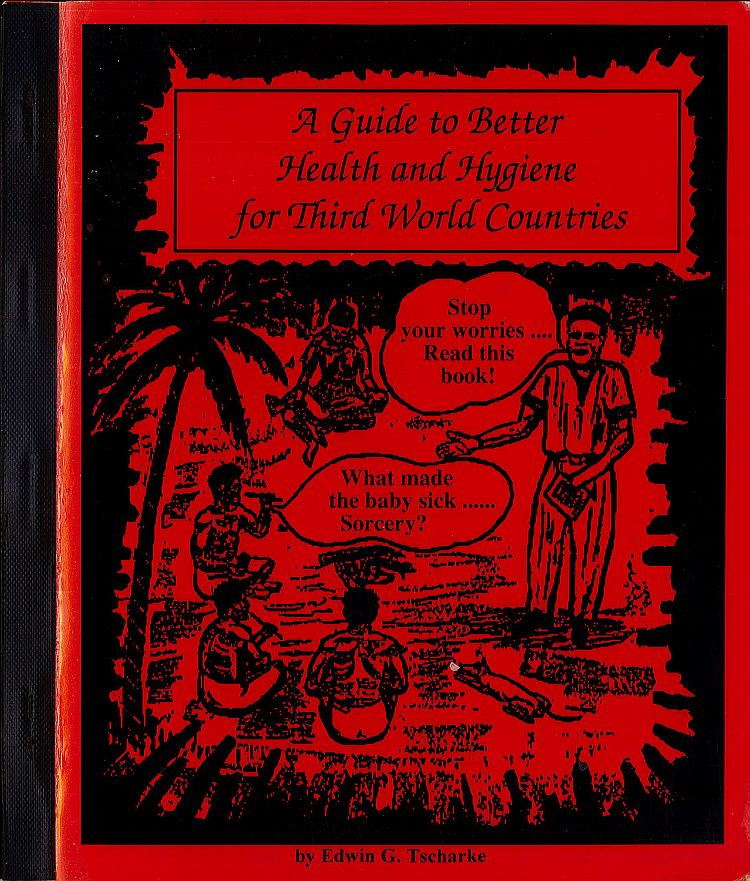 This 1993 booklet was the last version of Tscharke’s medical manual, which went through a number of editions over the decades. He completed the first self-published version in 1952, which was also translated and published in Tok Pisin as Yumi Daunim Sik (1958, 1967 and 1972). 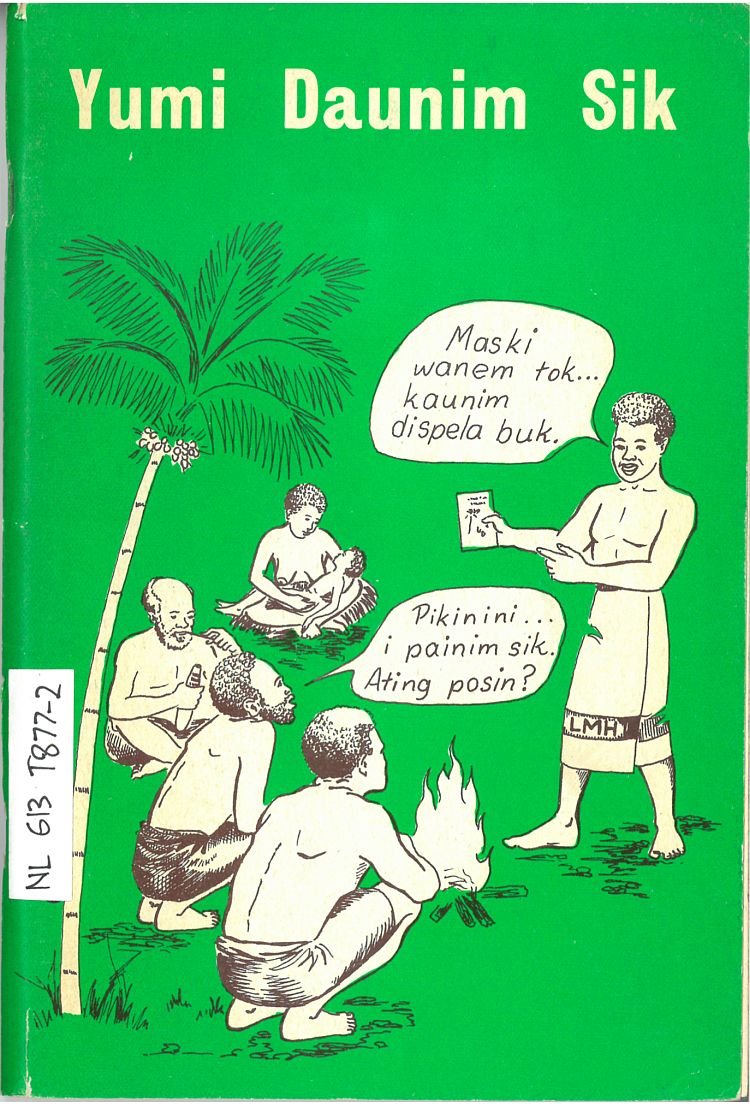 The cover images of Tscharke’s medical booklets point to an interesting aspect of his health project in New Guinea, namely, his extensive efforts to confront sorcery-related beliefs and practices. What, for Tscharke, was the relationship between ‘sorcery’, Christianity, and Western medicine in the South Pacific? And how did his views fit into the longer history of missionary activities?

Tscharke, who grew up in South Australia, joined the Lutheran mission in north-east New Guinea immediately after World War II. Not long after arriving, the Lutheran leaders sent him to Karkar Island to build a hospital. There he built Gaubin Hospital, which he would run for more than 40 years. In his own lifetime, he was recognised by the World Health Organisation for his ground-breaking medical training programme, which sought to train a generation of  New Guineans in medicine so that they could run their own health system without the need for foreign medical personnel. 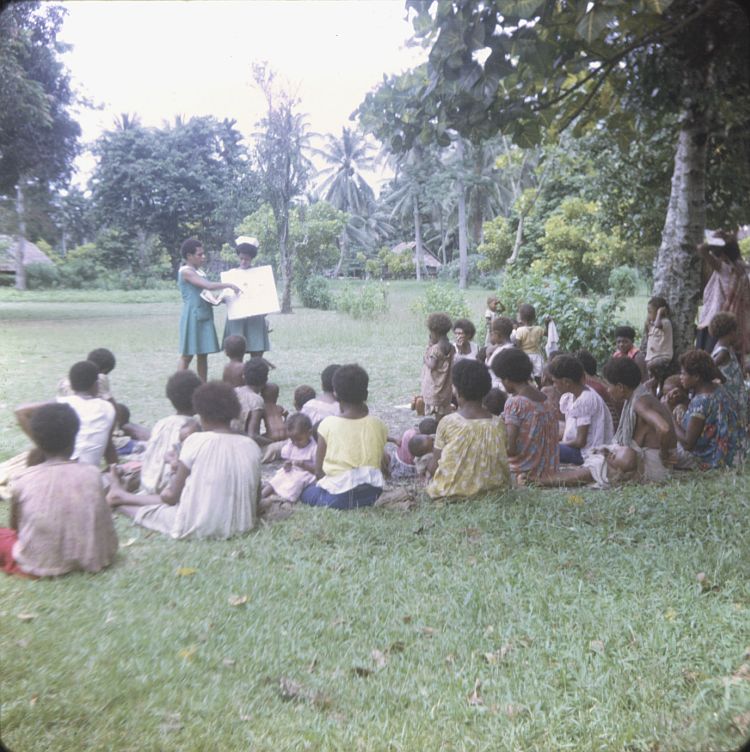 Little is known about the intellectual, theological and political context of Tscharke’s medical activities – especially with regard to his attitudes to ‘sorcery’ and medicine. His letters, reports, and photographs at the National Library – amounting to 5.42 metres – provide an invaluable insight into the historical context of his medical manuals.

In the late nineteenth and early twentieth centuries, many mainstream Protestant missionaries around the world tended to imagine that the authority of modern biomedicine would be self-evident in evangelical encounters. Their activities assumed that ‘animists’ and ‘heathens’ would simply reject traditional ‘sorcery’ beliefs and practices when confronted with demonstrations of the efficacy or results of modern medicine. Ed Tscharke’s papers are interesting because they show how far Lutheran missionaries in New Guinea had moved away from this view by the second half of the twentieth century.

Like previous Lutheran missionaries, Ed Tscharke believed that modern science needed to replace (as he put it) the ‘logic’ of ‘sorcery’. However, the NLA’s collection reveals that Tscharke also recognised that scientific authority was not necessarily self-evident, but instead required a careful understanding of the epistemological processes by which that knowledge came about (and not just results/ontology).

In this context, Tscharke produced his first medical training manuals as soon as he started training Karkar Islanders to act as hospital and regional medical staff. Tscharke’s earliest medical guide from 1952 contained text and images on not only modern medicine’s ontology but also on its epistemological underpinnings. In trying to convince people of biomedical explanations for sickness, his health education material focused, for example, on the importance of ‘observation’ (such as in autopsies) as well as tools such as microscopes. 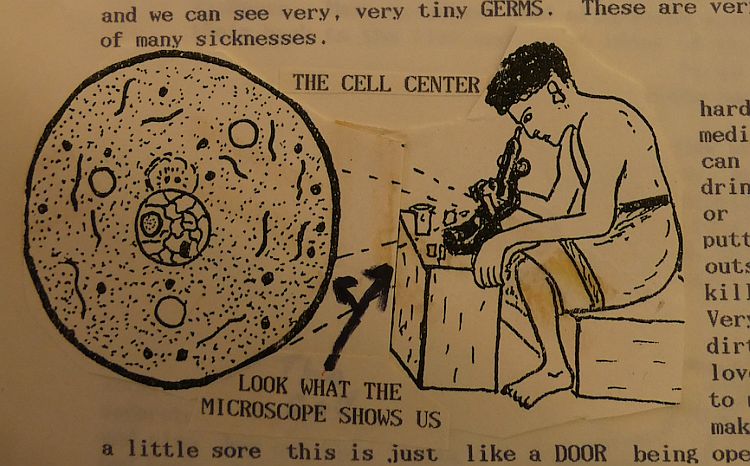 Image 4: A sketch from a draft manuscript version of Tscharke’s medical manual. It is unclear which specific images were drawn by whom, but most of the pictures were drawn by Shong Babob, a Karkar Islander. E. Tscharke, A Guide to Better Health and Hygiene for Third World Countries (1993). [Brisbane: Queensland Distance Education College], nla.cat-vn83228 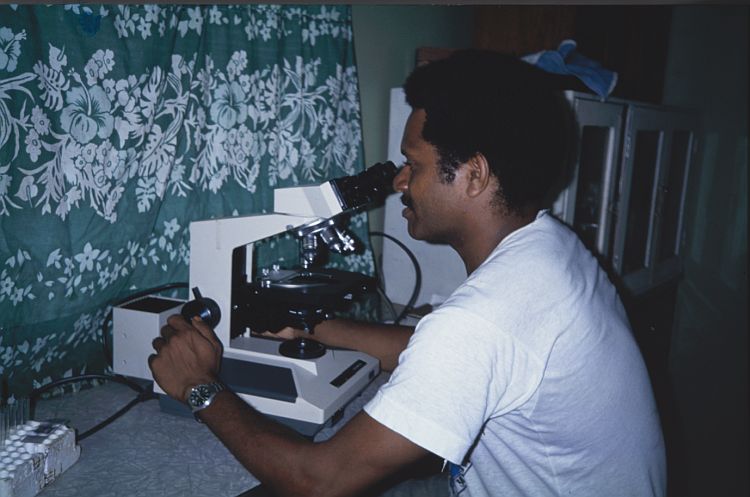