Sydney’s Luna Park, nestled beside the Sydney Harbour Bridge and with Harbour frontage, has a special place in the hearts of Australians. This Penny Arcade mask, featured in the promotions for the 2020 Community Heritage Grant round, was one of a number used in protests about the future of Sydney’s much-loved Luna Park. 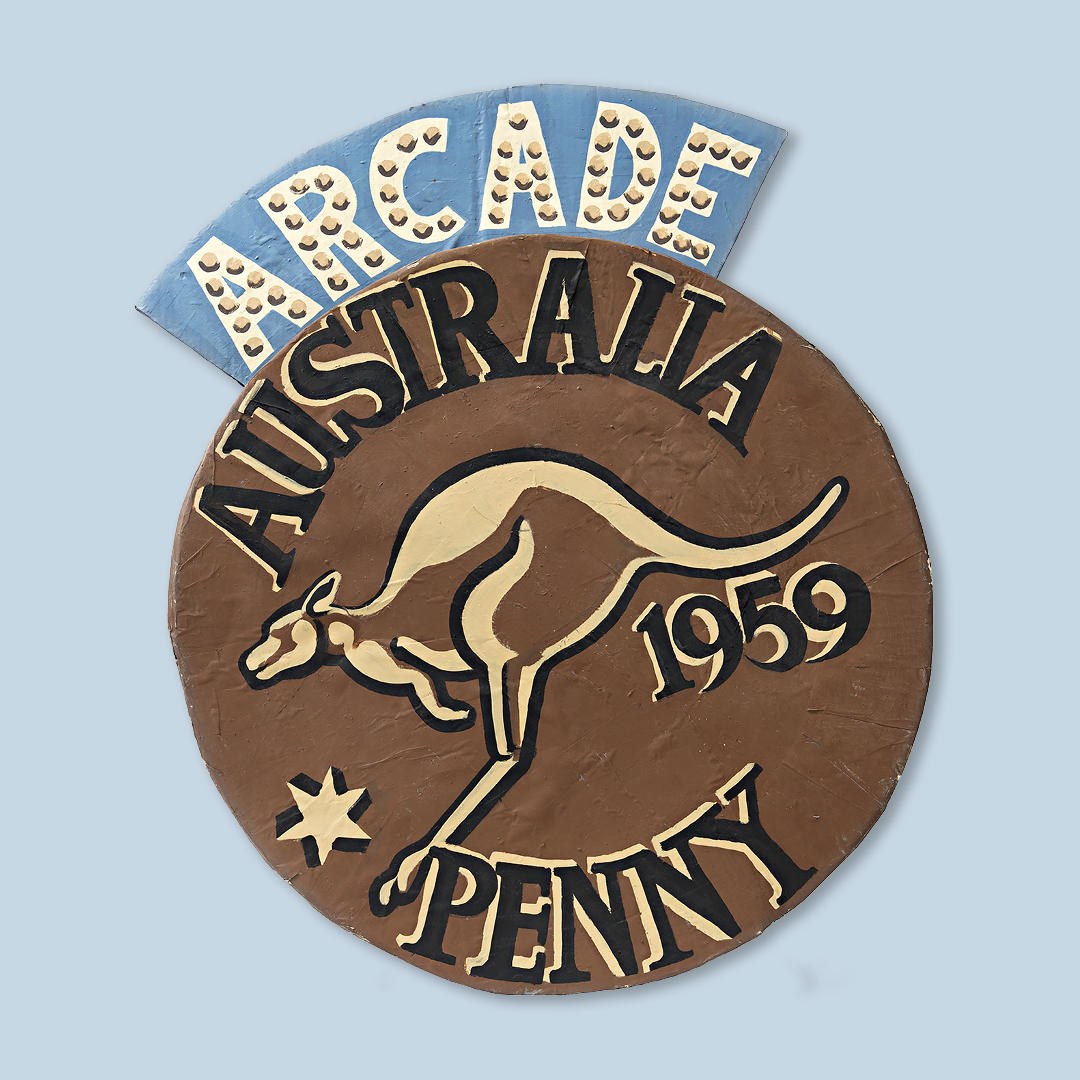 The amusement park opened beside the Harbour on 4 October 1935 and was an immediate success. Over the decades, management replaced rides with new attractions to keep up the “thrills” and “fun”. During the building boom of the 1960s and 1970s, the prime location of Luna Park made it very attractive to developers, with a range of redevelopment projects proposed. Not all were sensitive to the original character of the Park. However, a group of young “pop artists”, which included Martin Sharp and Peter Kingston, worked to update the Park while respecting its expression of vernacular popular culture. Most famously Sharp created his own version of the iconic face with an Illuminati eye on the rear side.

Tragedy struck the reinvented ‘pop art’ Luna Park in 1979 when a fire destroyed the Ghost Train Seven people were killed and the Park was closed. An auction of original infrastructure and paintings followed and the future of the site looked bleak. However, Martin Sharp, Peter Kingston and a group of others, residents of North Sydney and farther afield, rallied to “save” the Park.

The Friends of Luna Park lobbied (and protested when needed) to protect the site from redevelopment and presented their own ideas for a renewed Park. In June 1990, after then owners failed to meet their lease conditions by reopening the Park, and the Park’s future was uncertain, the Friends swung into action, with a protest outside the gates.

Ten Friends, costumed and wearing large masks inspired by Luna Park’s fairground art and quite possibly made by Sharp and Kingston, led the protest with large placards carrying the messages: 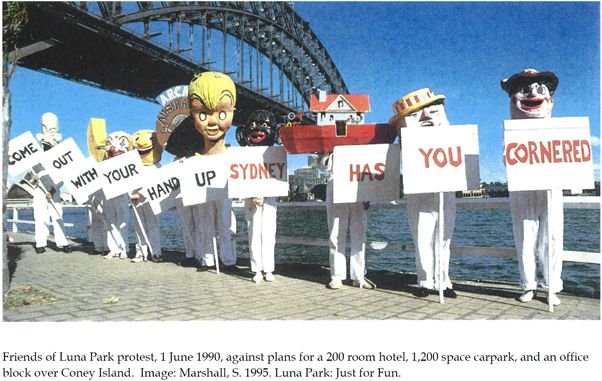 With a groundswell of public opinion behind them, and the support of high profile advocates including architect Harry Seidler, former North Sydney Mayor Ted Mack, radio personality Maynard and musician Ignatius Jones, the Friends prevented the redevelopment of the Park. In 1995 it rose, phoenix-like, from the proverbial and literal ashes after more work by Sharp, Kingston and others; but just a year later noise complaints forced a second closure. It was another decade before Luna Park opened again with a mix of original and new rides. It survives today as a Sydney landmark, an icon of Australian popular culture and a rare international example of a 1930s amusement park. 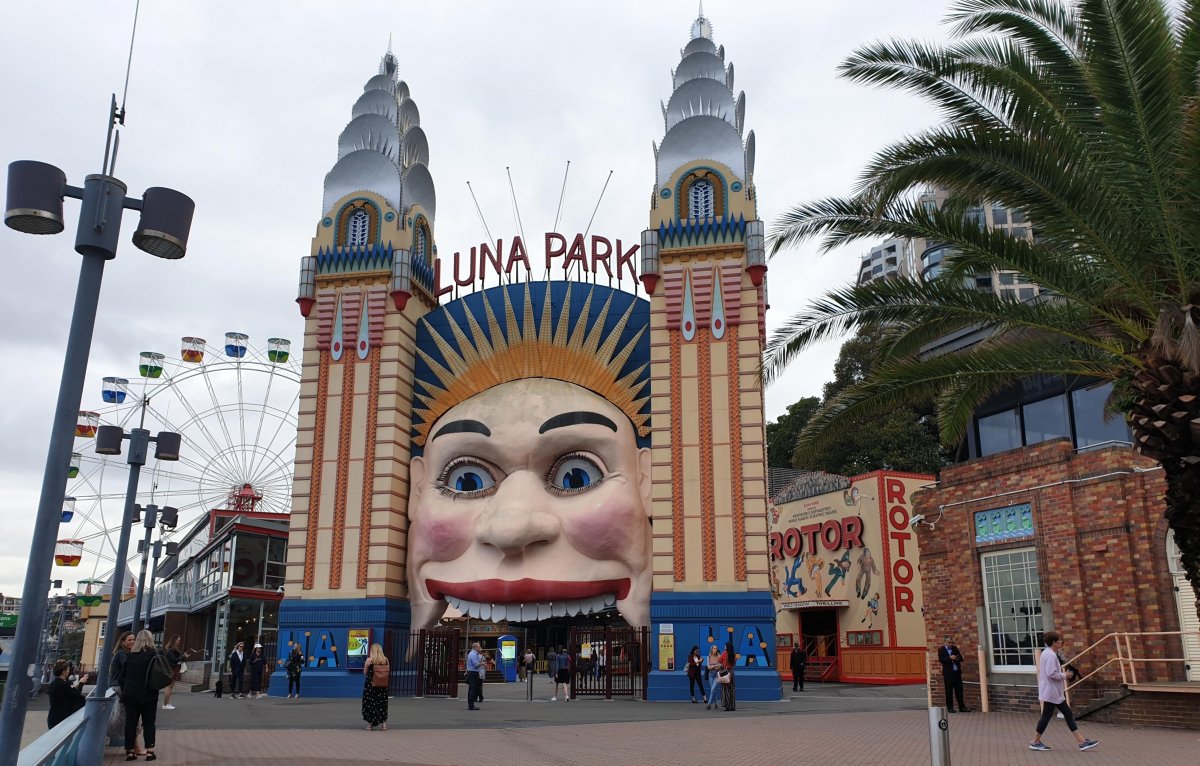 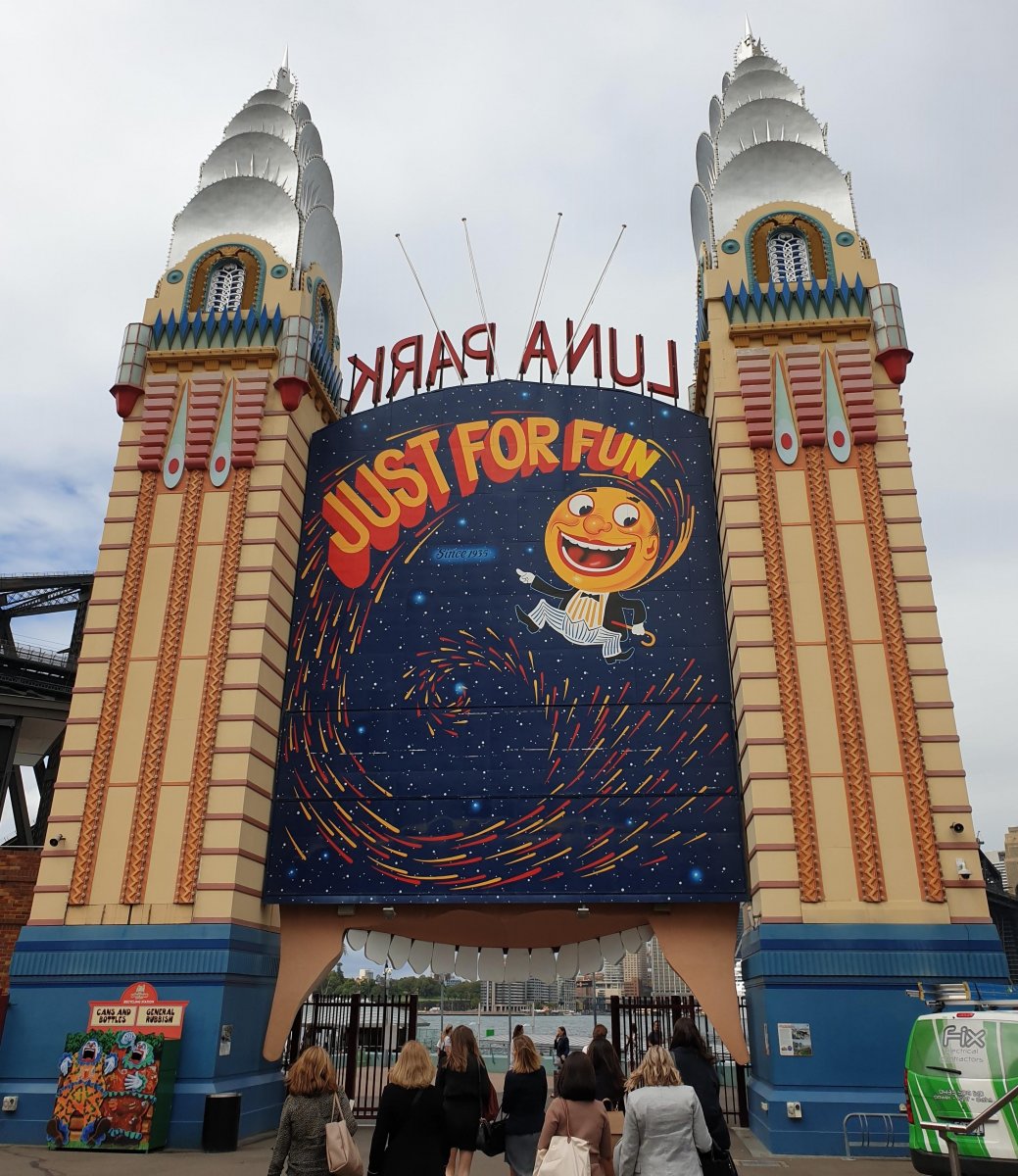 Such a history necessarily generates a diverse range of photographs, documents and memorabilia, not to mention accompanying memories. The Stanton Library is now the custodian of a huge amount of material created during the Friends’ work to save Luna Park for the people. Among that are several of the 1990 protest heads and dozens of oral histories. The collection also includes original artwork by the first resident artist, Arthur Barton - whom Sharp and Kingston revered as an exponent of fairground art - and blueprints from Stuart Brothers, the engineering firm who built the Park in 1935.

In 2018, Stanton Library successfully applied for Community Heritage Grants (CHG) funding for a Significance Assessment of its Luna Park Collection. The report confirms its National Significance, and provides guidance to assist with its long-term management and preservation. As Australians continue to enjoy Luna Park in the years to come, they can also better understand its history and importance to our culture through the Stanton Library’s Collection.