Hazel de Berg (1913–1984) was a woman of immense talent who, from 1957 onwards, created the National Library of Australia’s first oral history collection. Over 27 years, she recorded the voices of 1,290 Australians born between 1865 and 1953, including artists, writers, composers, scientists and many others. In December 2020, her legacy reaches a whole new audience as part of an innovative collaboration between the National Library and the National Portrait Gallery. Extracts from her recordings bring to life a wide range of portraits, matching visual and audio elements to create an immersive and moving experience. Visitors to the Portrait Gallery (and people across the world who download the specially designed app) will be able to hear extraordinary Australians in their own words (a great many of whom have passed away), thanks to Hazel de Berg’s efforts recording them decades prior.

Hazel de Berg began recording people in the 1950s and is today revered as Australia’s first oral historian. Sadly, for those of us who would love to hear more of Hazel de Berg herself speaking, she cut herself out of her recordings with others, although there are a few exceptions which delight listeners by providing small glimpses of her voice, talent and charm as an interviewer. 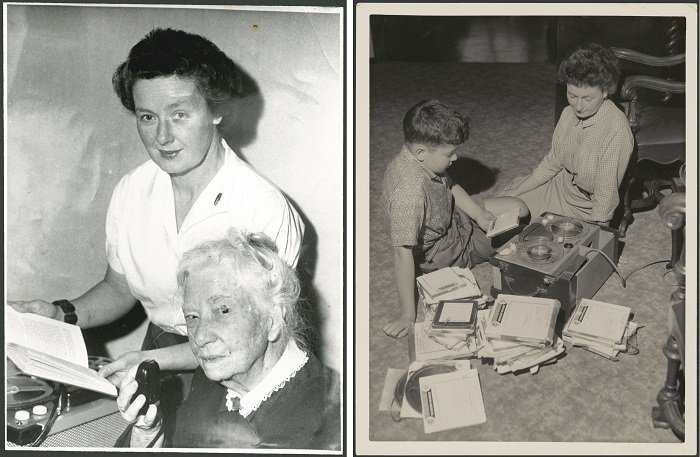 Before becoming Australia’s first oral historian, Hazel de Berg displayed other aptitudes and was a pioneer in other ways. After leaving school, de Berg trained as a photographer with Paramount studios and later worked in the studio of Noel Rubie. After marrying Woolf (William) de Berg and having three children, she later completed a course in radiography, as well as learning Indonesian and hosting Indonesian students visiting Australia as part of the Columbo Plan.

It was her voluntary work for the Blind Book Society, though, that set her on the path to creating her extraordinary oral history collection. In 1957, she recorded Dame Mary Gilmore making some introductory comments about her book Old Days, Old Ways (1934). This recording is the National Library’s oldest oral history recording and lasts 1 minute and 26 seconds.

After that initial recording with Dame Mary Gilmore, de Berg was inspired to continue her work. Her relationship with the National Library was established very early, as she began donating her work to the Library from 1960 onwards. The National Library in turn recognised the treasure of riches that de Berg was creating and preserving, and funded the transcription of her recordings and, from 1972, paid her an annual grant to assist her with the costs of her oral history recording.

It is thanks to the efforts of Hazel de Berg that we are able to hear the voices of Lord Howard Florey, who won a Nobel Prize for his work on penicillin, and beloved children’s writer, May Gibbs. These are just two examples of the diversity and breadth of her oral history. 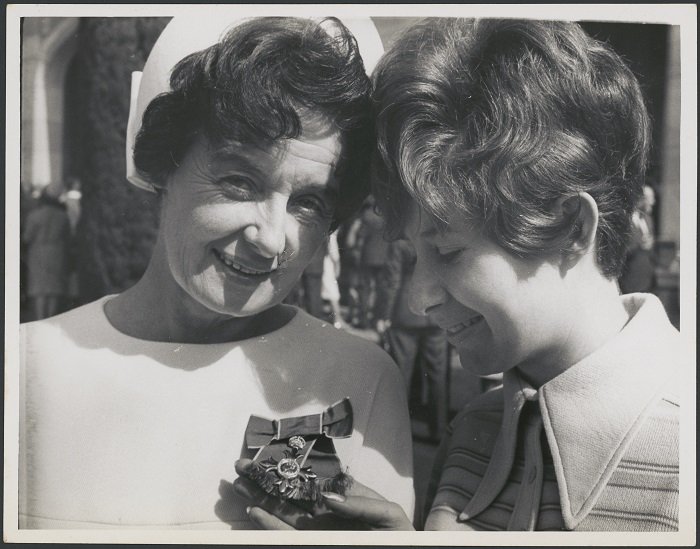 In 1968, she was awarded a Member of the British Empire for her pioneering work. Her daughter, Diana Ritch, is also a talented oral historian who has contributed many important interviews to the National Library’s collection.

Today, the oral history collection at the National Library consists of more than 54,000 recorded hours. The very cornerstone of this collection remains the extraordinary depth and breadth of the Hazel de Berg collection. Hazel de Berg was a forward-thinking and innovative person who did much to preserve unique voices from Australian culture and society. The Library is delighted to see this work being featured as part of an exciting new collaboration and is very proud to hold her oral history, photographic and manuscript material.

Find out more about the National Portrait Gallery In their own words exhibition.