A small but striking sculpture on display in the Special Collections Reading Room symbolically invites you to discover the National Library’s extensive Music Collection. This year’s Friends Creative Arts Fellow David Wickham will explore and share with us the works of composer Frederick Septimus Kelly but there is much more to be found.

The sculpture Open Book shows a conductor, arms outstretched with a baton in his hand. Gifted to the Library in memory of English-born Australian composer Peter Tahourdin (1928-2009), the work is by Dutch artist Wiea Duintjer (b. 1951). 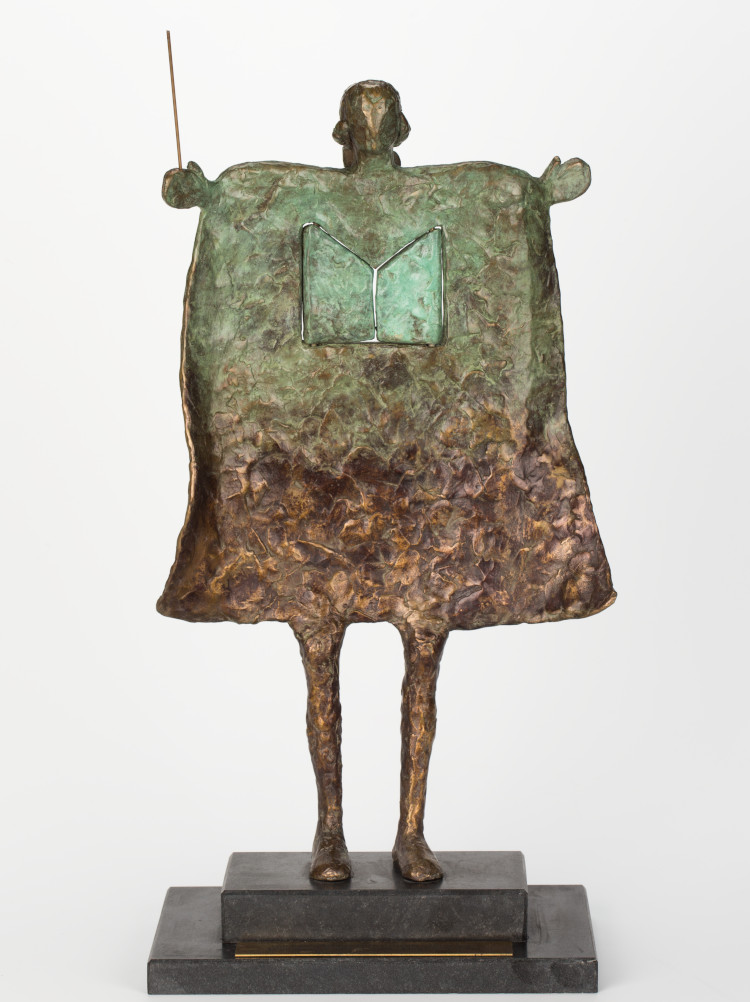 Peter Tahourdin emigrated in 1964 and became one of Australia’s most important contemporary composers, a pioneer of electronic music, and an inspiring teacher. He created works for orchestra, opera, ballet, chamber ensemble and voice. The Library holds his published music and personal archive—more than 18 metres of shelving.

If you look beyond Open Book, you will find an incredibly diverse and valuable collection: the largest collection of music research resources in Australia; more than 300,000 musical scores from the early 1800s to today; archives and personal papers from Australian composers, performers and music organisations; sound recordings; access to music notation software and a keyboard; as well as overseas material.

Where to start in delving into this vast collection?

Perhaps it’s the Symphony Australia collection—seven decades of Australian musical history from 1912, covering many genres of music, and representing the performance materials used by the ABC's orchestras and ensembles when the role of the ABC included facilitating the composition, performance and broadcast of works by Australian composers.

If you want to recall the music from television shows, the Library holds the long-time Channel 9 musical director Geoff Harvey’s collection—6,000 unpublished music arrangements used in Australian variety television from 1959 to the 1990s.

You may prefer to browse the 13,000 items of Australian sheet music, many with decorative covers and advertisements for stage and cinema productions. Where Copyright has allowed the Library has digitised its sheet music collection and you can access digitised music from our collections in the catalogue. Or browse the State Theatre Collection which consists also of more than 13,000 published orchestrations, band arrangements and instrumental music composed or arranged for small orchestra to accompany silent movies from 1900 to the 1930s.

There is a small but significant collection of Indigenous works and interviews; music written by Indigenous people, and some interpreted by non-Indigenous from interactions with Indigenous people. You will find the score of her opera Pecan Summer by Deborah Cheetham AO (b. 1964) and a 2008 interview with Mandawuy Yunupingu AC (1956–2013) in the collection.

However, the Library’s Music Collection will continue to grow. The legal deposit provisions of the Copyright Act 1968 require that all Australian publications, including sheet music, be deposited with the Library. Since 2016, this Act has applied to both digital and print publications. In 2020 the Library updated its Collection Development Policy, and Library’s preference is for materials to be in a digital format where available. The National edeposit (NED) service has been built to support digital collecting of contemporary publications. Over 1200 music scores deposited in digital format to date and are discoverable in the catalogue. Ask the ever helpful and knowledgeable Library staff if you need assistance to access items from among the music treasures.

Researchers
Friends of the Library
213