The March of the Women

The March of the Women
Exploring the suffragettes movement 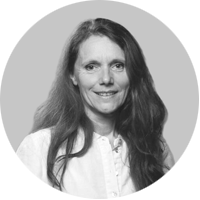 Shout, shout, up with your song!
Cry with the wind, for the dawn is breaking;
March, march, swing you along.
Cicely Hamilton/Ethel Smyth, 1911

On 21 January 2017, 500,000 people marched on Lincoln Memorial in Washington DC for the Women’s March. Denouncing the sexist and misogynist words of the newly elected President, the march was both an act of resistance against a regression in women’s rights and the expression of a political platform demanding equality of rights between men and women, and measures against violence towards women. This tradition of women’s marches recalls the events of 5 October 1789, when some French women marched on Versailles to protest against the French king or, closer to us, 3 March 1913, when American suffragettes marched in Washington DC to pressure the newly elected Woodrow Wilson. Past and present, these marchers were all demanding political recognition of women. 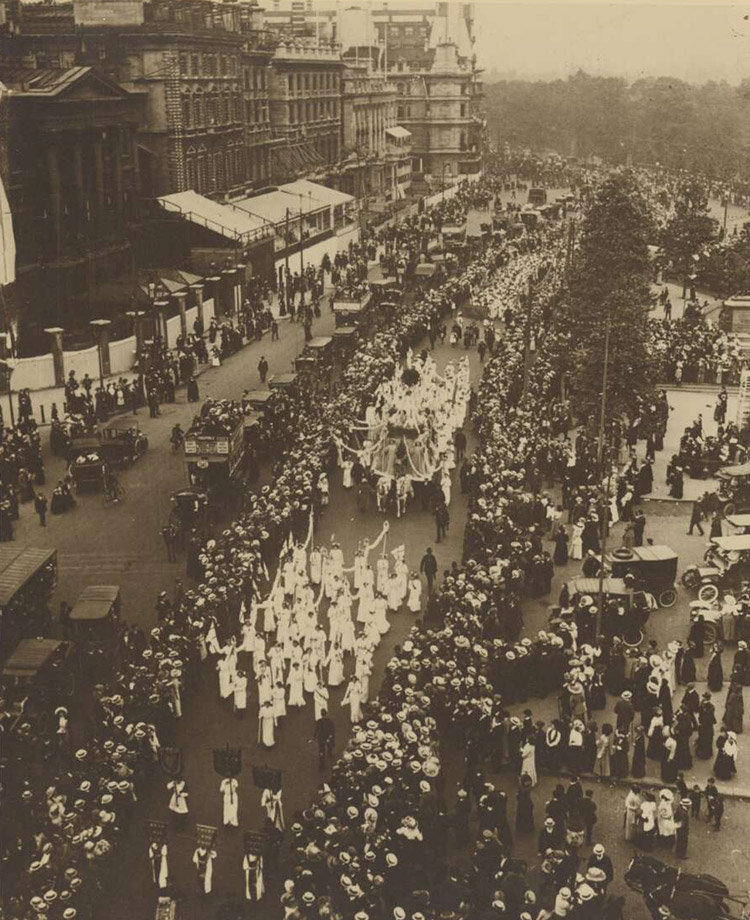 More than a century before the 2017 Women’s March, British women took to the streets demanding the vote. Throughout Britain, marches, processions, parades and pilgrimages were organised. Until then, the history of women had mostly been one of invisibility and silence. Taking the struggle for women’s suffrage into the streets was by no means legitimate or appropriate in the eyes of the men who wielded political power. Thousands of women all dressed in white became a key feature of London life in the first decade of the twentieth century. Female bodies occupying the public space had then to be reckoned with. 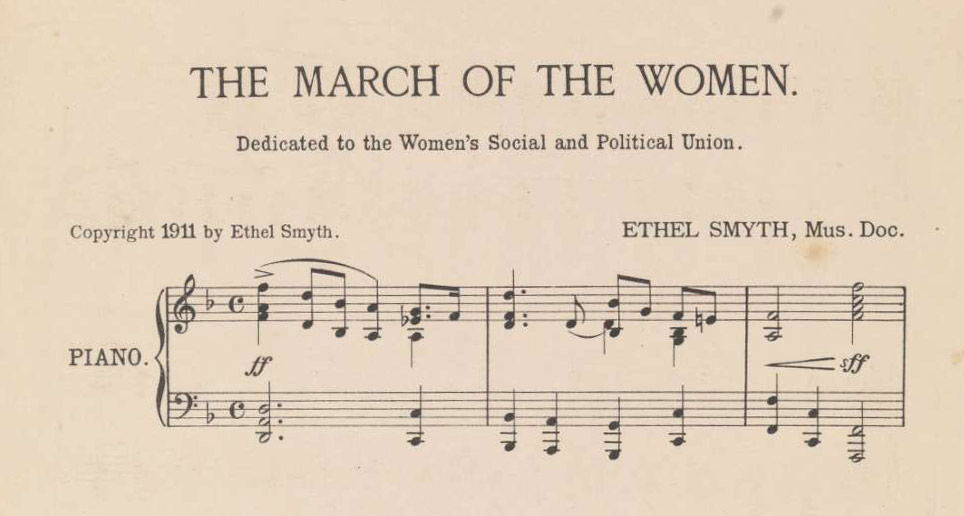 On 21 January 1911, 'The March of the Women', composed by renowned British composer and suffragette Ethel Smyth and with lyrics written by Cicely Hamilton, was performed for the first time in public to welcome suffragettes who had been released from prison. Versions for string quartet, piano or women’s choir were performed during demonstrations, in drawing rooms and at meetings. The song was also sung in prisons. The words and music no doubt galvanised the suffragettes, but it also amplified their presence in the public space and embodied in sound their struggle.

Both a hymn and a propaganda song, ‘The March of the Women’ exhorted women to engage in collective action:

Life, strife—those two are one,
Naught can ye win but by faith and daring.
On, on—that ye have done
But for the work of today preparing.
Firm in reliance, laugh a defiance,
(Laugh in hope, for sure is the end)
March, march—many as one,
Shoulder to shoulder and friend to friend. 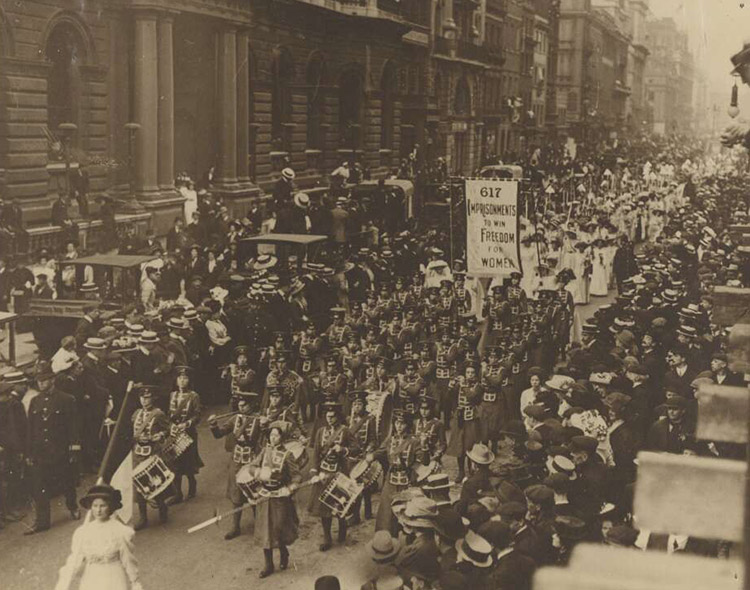 The exhibition Deeds Not Words: Women’s Suffrage in Britain, opening on 6 February 2018 and celebrating the enfranchising of eight million British women, shows the spectacle of suffragettes who ‘went out of the parlours and into the streets’ and made their voices heard. Photographs from the Bessie Rischbieth collection show suffragettes marching in processions and parades to promote their cause and resist the violence of the state. Memorabilia, posters and letters collected by Australian feminist Bessie Rischbieth are all testimony of the suffragettes’ strength and creativity in the long and arduous path to citizenship.

Comment:
I hope you also credit the efforts of British women from the previous centuries, particularly Mary Wollstonecraft, who published 'A Vindication of the Rights of Women' in 1792. A far greater claim to fame than just being the mother of Mary Shelley or having a nephew who gave his name to Wollstonecraft station on Sydney's North Shore Line?
Comment:
I hope your exhibition has mention/shows the banner designed by Dora Meeson, for the Women’s Suffrage Coronation Procession in London on 1911 and references it now being displayed at Australian Parliament House. https://www.dss.gov.au/our-responsibilities/women/publications-articles/general/how-australia-led-the-way-dora-meeson-coates-and-british-suffrage Dora Meeson had the distinction of being the first Australian woman artist elected a member of the Royal Institute of Oil Painters.
Comment:
What an excellent blog post with such evocative images and music. Greatly looking forward to this incredibly timely exhibition!
Comment:
Thank you for hosting/highlighting this exhibition. I wish I could be there in Canberra for it. Your exhibitions are always so enlightening. Thank you too for juxtaposing it alongside contemporary events. As a young feminist I was always amazed that battles fought long ago for what I considered basic rights e.g. maternity leave, still needed to be fought for in contemporary times. We need these timely reminders that things fought for are not always a given or secure.
Comment:
I was most interested to view this exhibition but felt I wanted to know more about Bessie Rischbieth & her association with British suffragettes. The Australian Dictionary of Biography entry for Bessie is most informative. Some comparative information about the Australian suffrage movement could be informative for Australian visitors. Why was Bessie awarded an OBE? The explanation was not in evidence beside the actual medal?
Comment:
Thanks for this work, as a volunteer at Jessie Street National Women's Library I am digitising an Australian Women's Song Book collected in the 1980s arising out of the National Women's Music Festivals held in Lismore NSW Australia in the 1980s. This is a fabulous context in which to set my work.
Comment:
Hi, I live at Lennox Head near Lismore, I would love to acquire a copy of your digitised Song Book, how can I get a copy? my email is amandabromfieldartist@gmail.com