In the many accounts of Captain Cook’s exploration of the Pacific in the 18th century, his visit to Norfolk Island is often overlooked or barely mentioned. Although just a speck of land in a vast ocean, the island played an important role in the colonisation of Australia.

Early in 1774, in London, Captain James Cook sat at dinner on the eve of his second voyage into the southern hemisphere to try to find the ‘Great South Land’. Next to him sat the Duchess of Norfolk who said,

“If you find a small isle would you name it after me?”

Later that year Cook on HMS Resolution stood south from New Caledonia bound for New Zealand. On the morning of 10 October 1774 the ship brought up an emerald isle; a “Paradise” as Cook described it, which he promptly took in the name of the British Crown and called Norfolk Isle.

Cook landed on the north-west corner of the uninhabited island and spent the morning ashore. Cook was impressed by the sight of the tall pine trees which covered the island and the flax which grew in the undergrowth. Ever the naval officer, he immediately thought of masts and cordage for the Royal Navy. Here was a prized possession indeed! Cook’s other brief observations led him to believe that he and his party were the first humans to sight the island. (It was later shown, however, to have had much earlier Polynesian habitation)

Cook sailed on to the south noting two adjacent smaller islands (later named Nepean and Phillip)–making up the Norfolk group.

The Norfolk Island group is about 1500 km north east from Sydney; parallel with Byron Bay, 800 km from New Caledonia and 600 km from New Zealand. It lies on the Norfolk ridge – the eastern undersea edge of ancient Gondwanaland - and is volcanic in origin. Norfolk Island is some 12 by 5 km in size and is home to endemic flora and fauna.

After Cook, Norfolk Island remained undisturbed by humans for another 14 years.  In January 1788 French explorer La Perouse sailed by the island and not being able to land, described it as being “fit only for angels and eagles”.

Six weeks later however humans came again to change Norfolk Island forever. On 29 February 1788, Lt Philip Gidley King on HMS Supply sighted the island and reclaimed it for Britain. King had sailed from Sydney Cove (coming across Lord Howe Island on the way) on the orders of Governor Phillip who, in turn, had instructions on settling Sydney, to “secure” the island for its resources and to prevent it from being occupied by others.

Fortunately its resources were found unsuitable for masts and sails and ropes. Later used as a penal settlement and eventually becoming the home of the descendants of the Bounty mutineers, Norfolk Island has, since 1914, been an Australian external territory. 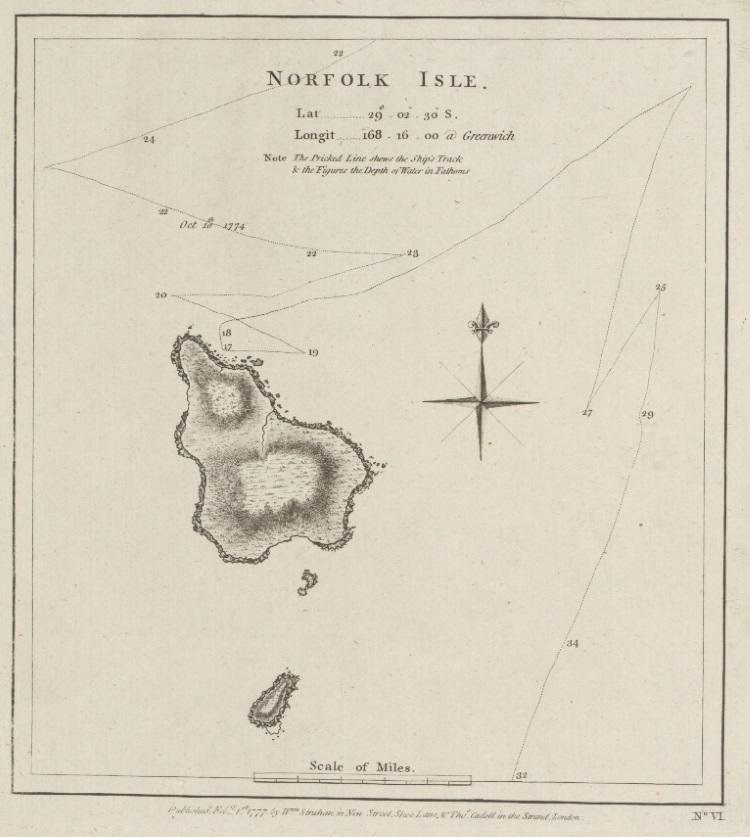