First Nations peoples are advised that this blog post contains names of deceased peoples, and content that may be considered culturally sensitive.

Hollie is a Gunggari woman from the Maranoa region of south-west Queensland. Hollie was the Assistant Curator for the National Library of Australia’s current exhibition Cook and the Pacific.

Many communities have been recording and documenting their languages in order to revitalise, protect, and preserve them, making them available for current and future generations to learn, enjoy, and continue to use. This venture is also taking place among First Nations communities throughout the world and ‘…the United Nations have declared 2019 The International Year of Indigenous Languages…’[3].

As part of this effort, early recordings or ‘wordlists’ of First Nations languages by European explorers have offered another avenue for First Nations people in Australia and across the Pacific to reconnect with, and revitalise their languages. On display in the National Library of Australia’s current exhibition Cook and the Pacific, are journals recorded by Cook, Joseph Banks, and David Samwell (Surgeon on the Discovery). As well as from our own collection at the National Library, these journals are on loan to us from the British Library and the State Library of New South Wales. These journals are displayed open to pages showing wordlists recorded during the voyages including those of the Guugu Yimithirr peoples (Endeavour River, Queensland), Mowachaht/Muchalaht peoples (Vancouver Island, North America), and Haka from Tōtaranui, Aotearoa (Queen Charlotte Sound, New Zealand).

As part of the development of Cook and the Pacific, we spoke with a number of First Nations communities in Australia and across the Pacific about their place, their culture, and their story. Community members and Elders shared their stories with us, and this has enriched Cook and the Pacific with a more holistic narrative of Cook’s voyages. When talking with First Nations peoples, they also shared knowledge of their languages and their perspectives on these wordlists. This revealed evidence of misunderstandings and misinterpretations by those who recorded the language, further details on the meanings of the words recorded, and brought to light how some of the languages have changed or remained the same over time. Some community members recorded their language and their thoughts on these wordlists, which visitors can hear in the exhibition [4]. Visitors can interrogate these wordlists on touchscreens, and hear them come to life through the voices of the descendants of the First Nations peoples that were met on Cook’s three Pacific voyages.

This is the most exciting word to me, because we in north Queensland call ourselves Bama, and he’s got it here… the word Bama actually means a man or a human being… people called themselves Bama before and we still continue that today.

You can hear more from Aunty Alberta about these wordlists and see Joseph Banks’ Endeavour journal [6] in Cook and the Pacific. Or watch Guugu Yimithirr Traditional Owner and Bama Historian Alberta Hornsby speak about her community below [7]. 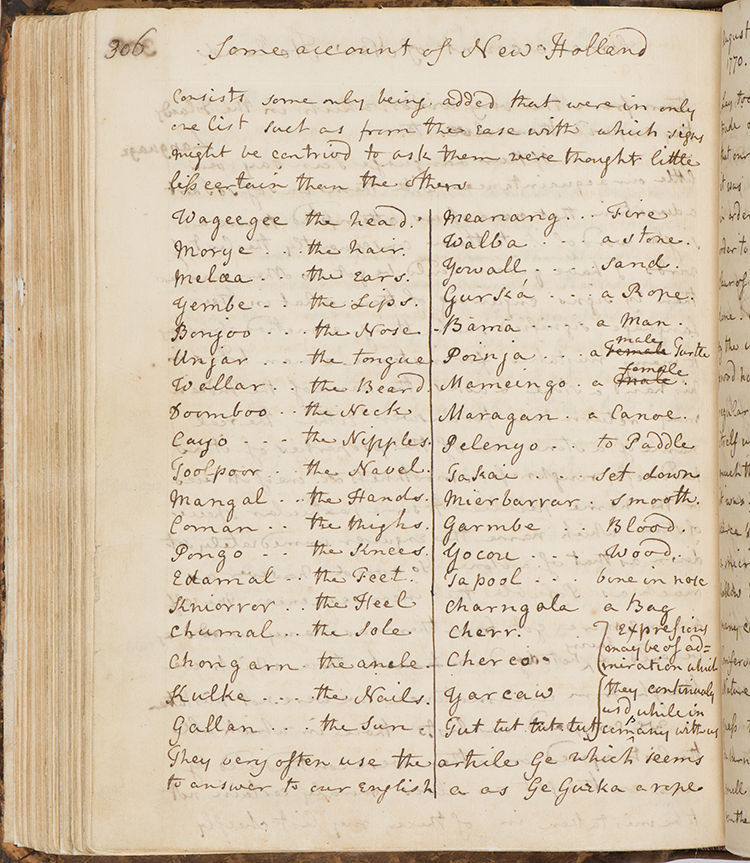 There are many types of Haka, and there are many tribal areas as well. From each tribal area comes different Haka…What does Haka mean to me? I mentioned ‘Ko au te Haka ko te Haka ko au’, ‘I am Haka, Haka is me’…The Haka brings out the warrior within you. It helps you to feel proud about who you are, it helps you to believe what you’re doing, why you’re doing it, and it adds strength and body to whoever is in front of you, whoever is beside you, and behind you. That is what I believe the Haka is. Isaac Cotter, Māori Elder and Tutor at Māori Performing Arts, ACT

They frequently show us their War Hevah on the Ship, which is admirably calculated to strike Terror into their Enemies, consisting in violent Gestures and contortion of their Faces & Bodies, hanging out their Tongues, staring as if theyr Eyes were ready to start out of their Heads & repeating in a vehement Tone & manner a Song probably breathing Contempt & Defiance of their Foes. These War Songs they call Ehaga…[8]

Samwell accompanied Cook during his third, and fatal, Pacific voyage (1776–1779). Samwell is most well known for his published account of Cook’s death, but his manuscript journal features extensive recordings of language from across the Pacific including those from Tonga, Hawaii, Nootka Sound (Vancouver Island), Kamschatka (in Siberia), and more.You can see Samwell’s journal on display in Cook and the Pacific open to the recordings of Haka at Tōtaranui, on loan to us from the British Library. 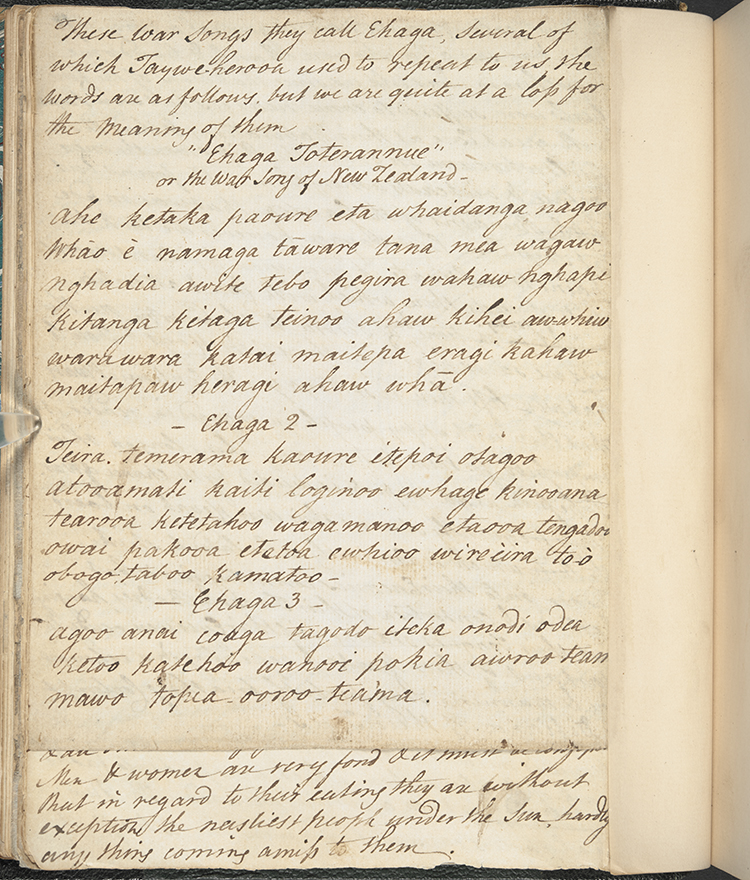 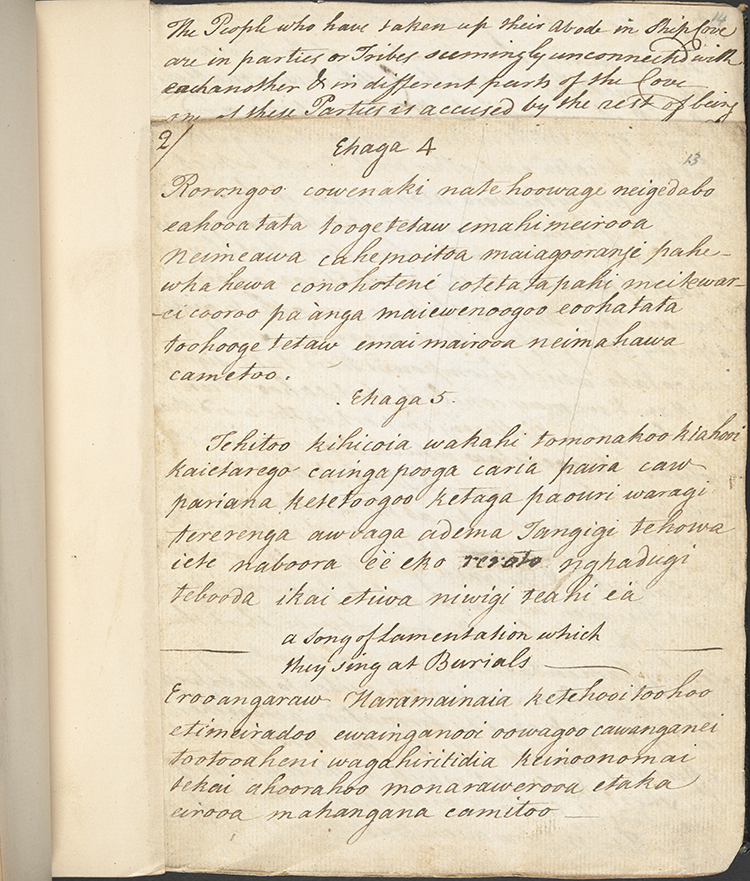 The legacy of Cook’s three Pacific voyages has had, and continues to have, an impact on many people today. As an Indigenous woman, it was important to me to be able to collaborate with First Nations communities to tell their story, their way, throughout the exhibition. It was one of our goals to be able to connect visitors to the exhibition with the living, ongoing cultures and languages of the First Nations communities that Cook and his men visited in the late eighteenth century. By speaking with Elders and community members from locations on the East Coast of Australia and throughout the Pacific, we have been able to include their living voices in the exhibition, and on the exhibition’s website.

Join us at the National Library of Australia during on the weekend of 9 and 10 February for our two-day conference Language Keepers: Preserving Indigenous Languages. This conference will highlight the wordlists that were recorded during Cook’s three Pacific voyages, and also focus on the work being done by First Nations communities in Australia and across the Pacific to revitalise, protect, and celebrate their languages.

[4] The quotations from First Nations peoples in this blog are featured on the interactive touchscreens in Cook and the Pacific.

[6] Joseph Banks’ Endeavour journal was page turned for conservation purposes before the publishing of this blog and is no longer displayed open to the Guugu Yimithirr world list. You can still see this wordlist on the interactive touchscreens in Cook and the Pacific, and hear commentary from Aunty Alberta Hornsby.