This is the second of a three-part blog, an overview of the voyage art in our recent exhibition. Susannah Helman was co-curator and project manager of Cook and the Pacific. 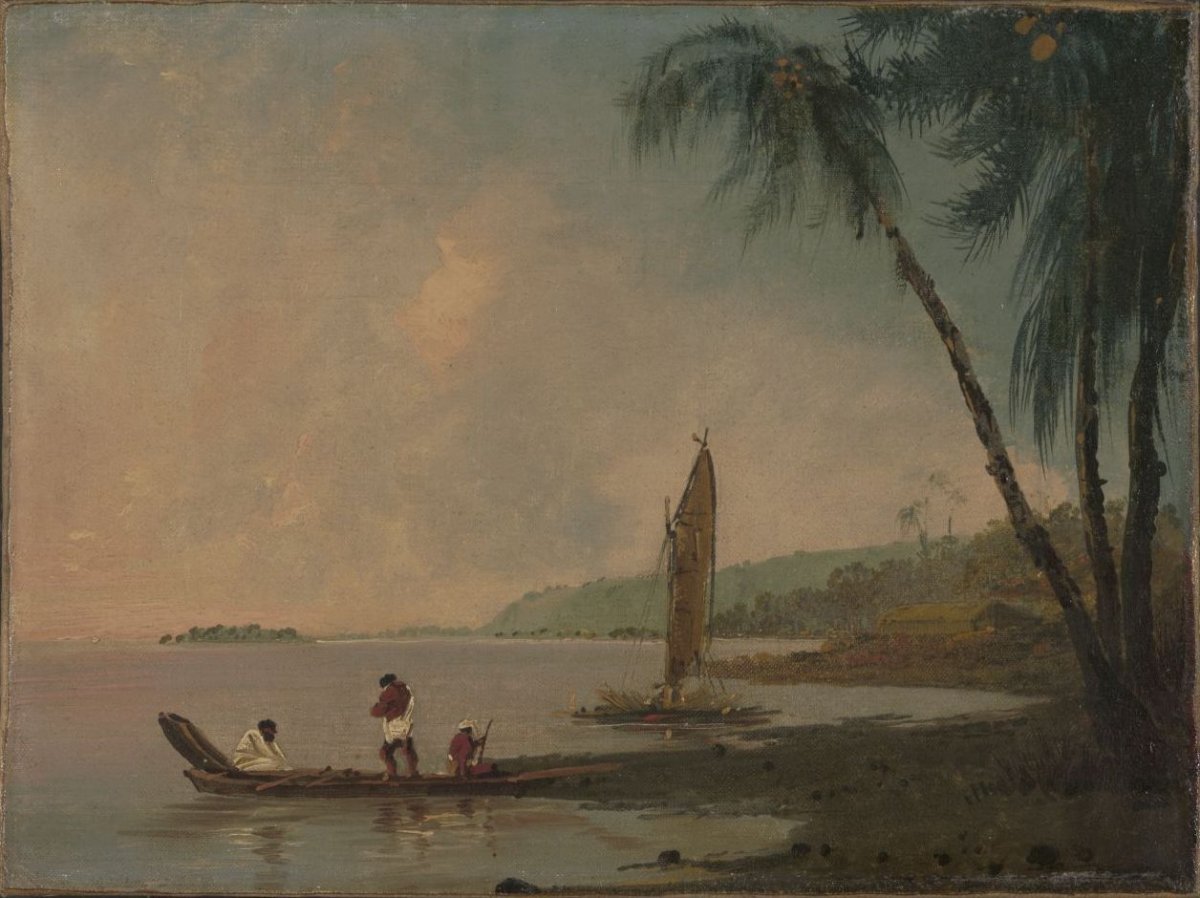 From Cook’s second voyage (1772–1775)—which aimed  to clear up whether there was a vast southern continent—we had thirteen works by William Hodges on display in Cook and the Pacific. Hodges was primarily a landscape artist—he had trained under the great Welsh landscape painter Richard Wilson. He is perhaps best known for his large oils of Pacific scenes, completed for the Admiralty in the years after the voyage. Though there was a small Hodges landscape in our exhibition (above), the Library’s strength from the second voyage, is its holding of eighteen large chalk portraits of people they met in the Pacific. Most of these portraits depict people from New Zealand and the Society Islands, where the voyages spent more time than elsewhere. Ten were in the exhibition. Most are referenced in voyage journals. Tantalisingly, we know more about some of the people and the meetings than others.

All are developed drawings, a stage between the initial sketch and published engraving, which appeared in the official account. The sketches are rare, but some do survive in collections around the world, including this sketch for the woman of Easter Island. The British Museum holds what is thought to be a preliminary sketch, the National Library of Australia holds the chalk developed version and the final engraving was published in the official account in 1777. 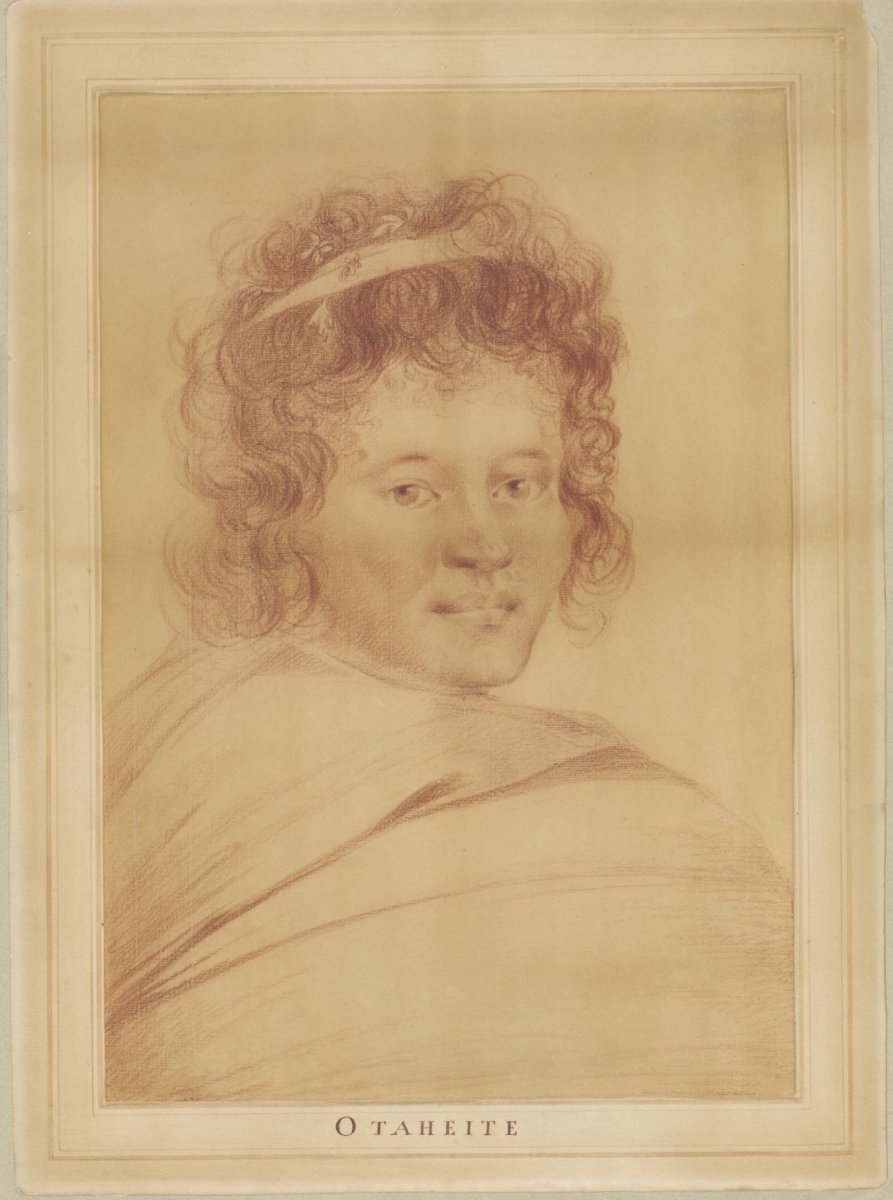 Interestingly, some of the engraved versions are quite different from the developed versions. For example, see the chalk portrait of Tynai-Mai, princess of Ra’iatea and the published version here. Some of Hodges’ portraits suggest a genuine connection with the sitter, and voyage accounts record these meetings. Georg Forster, naturalist on the voyage. described her this way: ‘Her eyes were full of fire and expression, and an agreeable smile sat in her round face. Mr Hodges took this opportunity of drawing a sketch of her portrait, which her vivacity and restless disposition rendered almost impossible.’

Some of Hodges’ portraits are particularly fine, such as his portrait of Tu, or Otoo. Some years after Cook died, Tu rose to be king of all Tahiti, and he ruled as Pomare I from 1788. Cook’s voyages coincided with a revolution in Tahiti; the rulers met by Samuel Wallis’s Dolphin voyage in 1767 were no longer in power. Cook and others thought Tu was more important than he was. 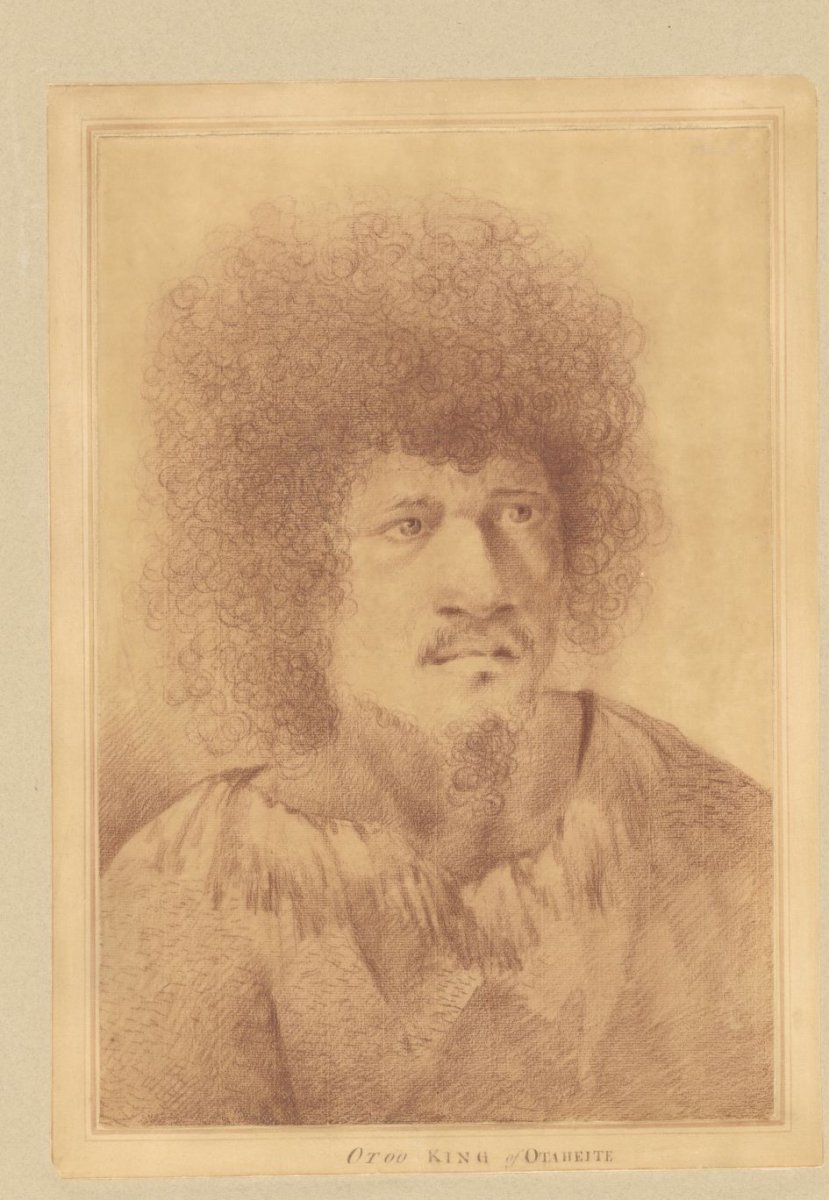 Confirming that idea, Hodges’ portrait bears the title: ‘Otoo, King of Otaheite’. In his account of the voyage, naturalist Georg Forster described him this way: ‘His head, notwithstanding a certain gloominess which seemed to express a fearful disposition, had a majestic and intelligent air, and there was great expression in his full black eyes.’

One of the most exciting things about exhibition making is being able to bring together objects that have a connection to each other, but have long been apart. Such is the case with this small portrait of a Maori man, by William Hodges. It is held in the National Library’s collection. 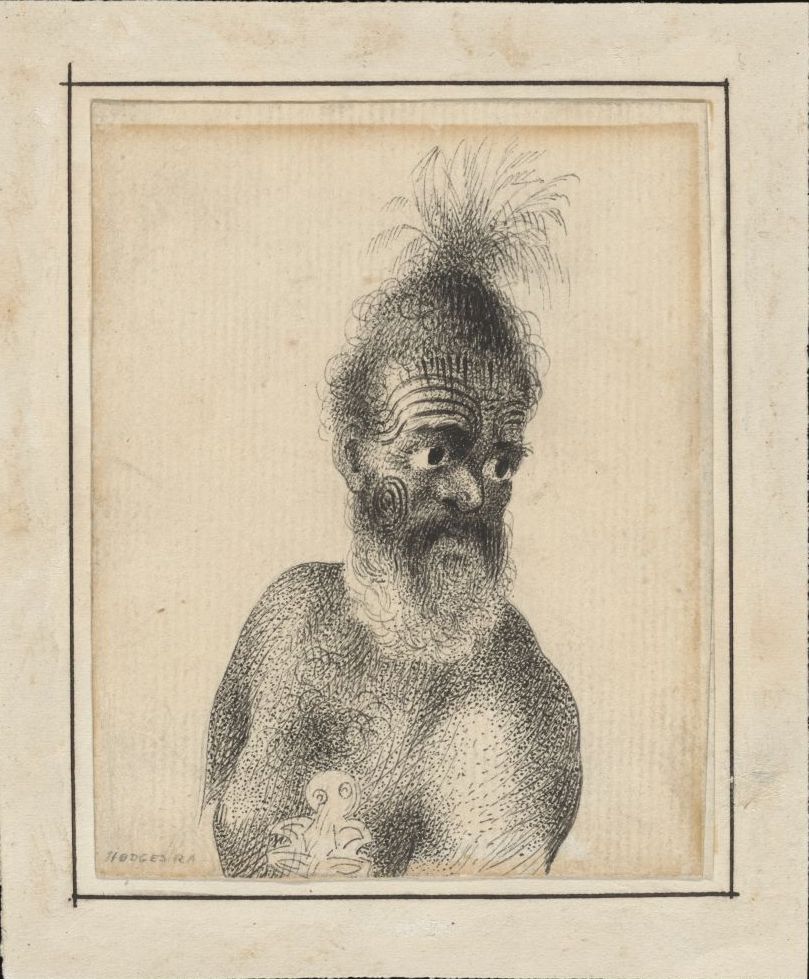 Rudiger Joppien and Bernard Smith, authors of the standard catalogue of the art of Cook’s three Pacific voyages, thought this was a study for a figure who appears on a manuscript map. That map was effectively Cook’s statement on his achievements of the second voyage. Cook felt he had dispelled the myth of the southern continent. The figure is on the bottom left. The map was a collaborative affair, a coming together of the ship’s captain (Cook), artist (Hodges), officer and mapmaker (Roberts) and the naturalist (Johann Reinhold Forster), who selected the quotation. We borrowed the version of this map held by The National Archives (UK). It was sent back to the Admiralty from Cape Town, as frontispiece to the copy of Cook’s journal. The copy was a way of safeguarding the results of the voyage, should the final full version go astray before reaching the Admiralty. 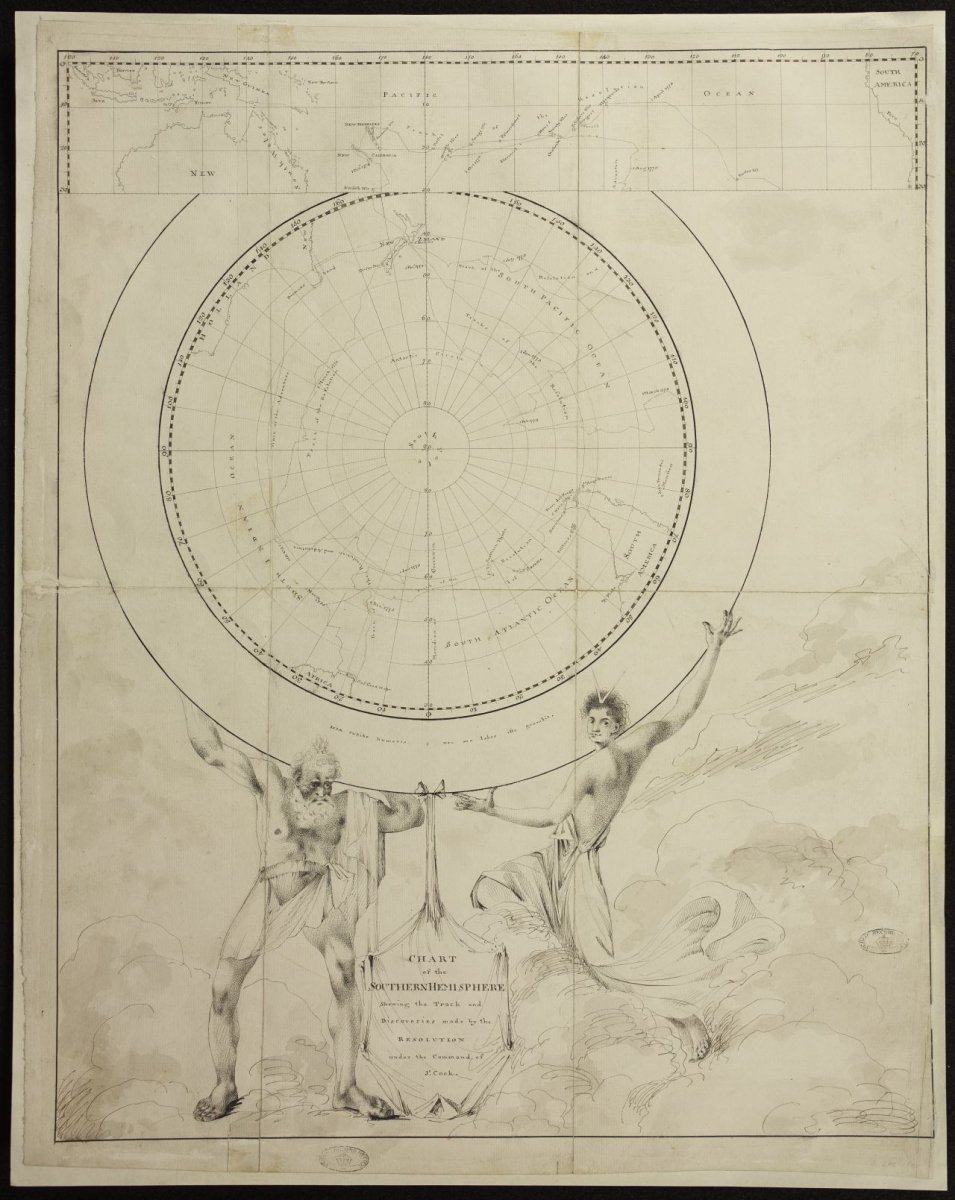 Two works finished after the second voyage were undoubted exhibition highlights. One was the double portrait of the naturalists Johann Reinhold and Georg Forster, by Jean François Rigaud on loan from the National Portrait Gallery, Canberra. The Forsters had sailed on that voyage, Johann as scientist and Georg as scientific draughtsman. They are shown at work together in New Zealand. Georg was an accomplished artist. He is shown sketching while his father holds a bellbird; in his hatband is a botanical specimen (Forster sedifolia), named after them. 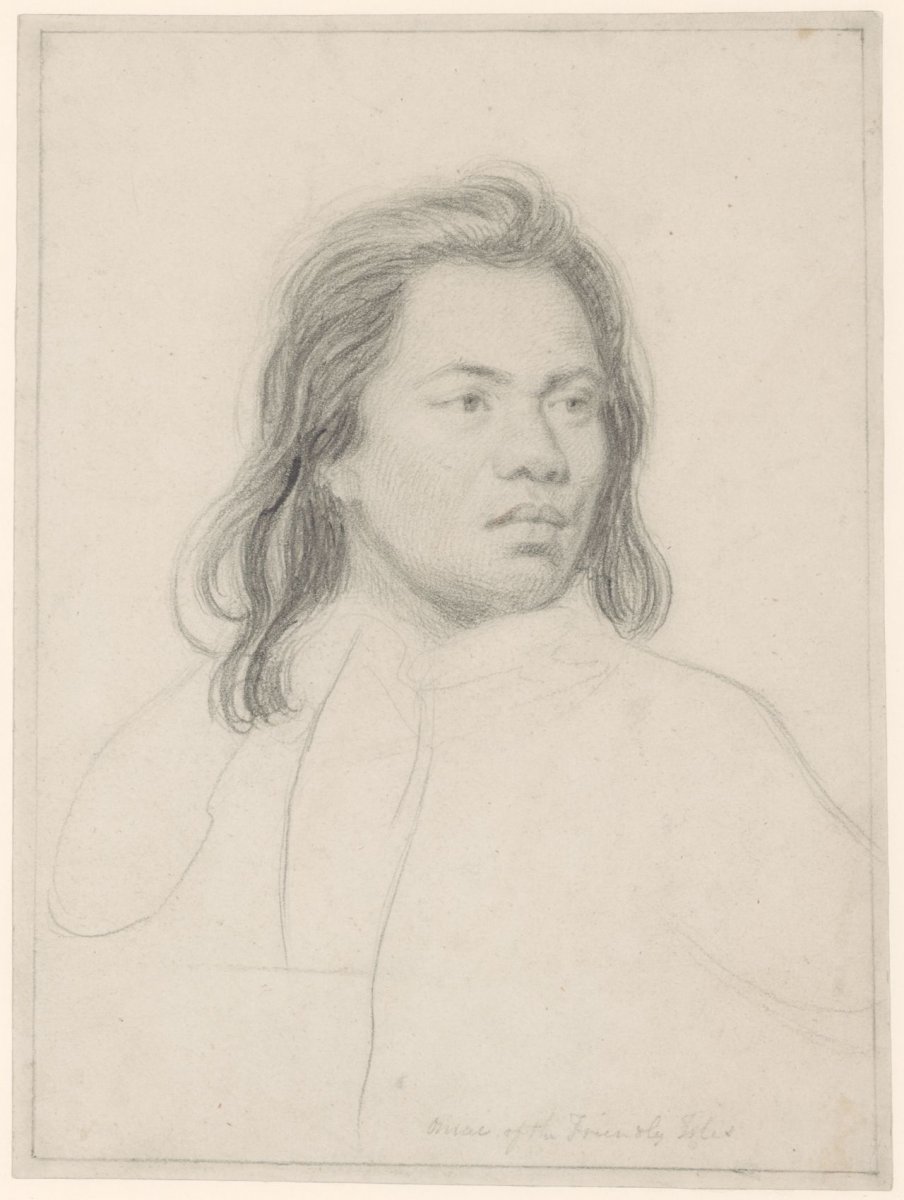 The other highpoint was the portrait, in pencil, of Omai by Sir Joseph Reynolds, London’s celebrated portraitist. Omai (Mai) joined the second voyage in the Society Islands, and sailed to London on the Adventure in 1774. He returned to the Pacific on Cook’s third voyage, reaching Huahine in the Society Islands in November 1777. He is thought to have died in around 1780.

Stay tuned for the final blog in the series.