Ellis Rowan (1848–1922) is one of Australia’s most celebrated artists. Best known for her striking wildflower paintings, Rowan also had an interest in birds. The Library’s new Collections-in-Focus exhibition Birds of Paradise: Ellis Rowan in New Guinea (8 September 2020–8 March 2021) draws together material from our vast Rowan holdings to showcase her paintings of New Guinea’s Birds of Paradise, providing fascinating insight into this period of her career.

Rowan was already an acclaimed artist by the time she was painting in New Guinea in 1916 and 1917, and she had mastered the bold compositions she is best remembered for. Her paintings are not precise natural history studies; instead, they are vibrant, passionate portraits of plants and birds. Despite wanting to paint professionally in New Guinea, having the means and appropriate permission to travel to the region was another matter. In her new NLA Publishing book, Ellis Rowan: A Life in Pictures, Christine Morton-Evans notes evidence that Rowan paid a fleeting visit to New Guinea in the 1890s. She hoped to pay an extended visit to paint the wildflowers – her comments after this first trip explain the appeal of the region: ‘I have travelled all over the world, and have never seen more beautiful flora than that of New Guinea’. 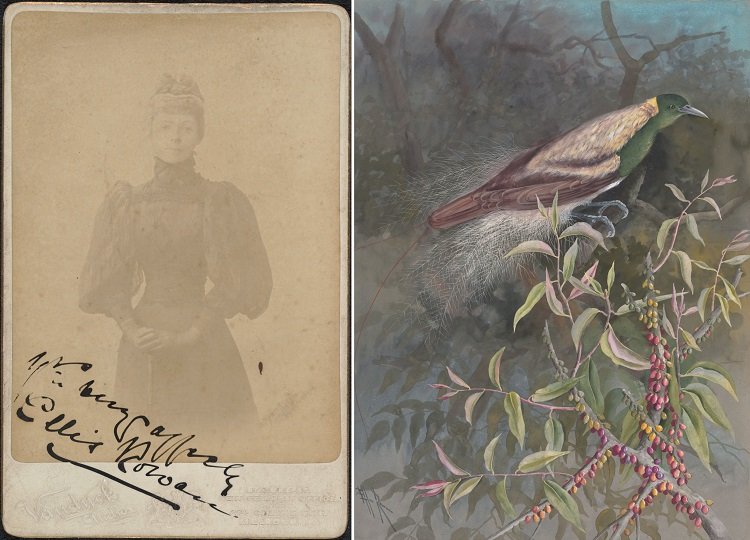 Thankfully, Sydney-based china importers and fine jewellers Flavelle Brothers commissioned Rowan to visit New Guinea to paint wildflowers and Birds of Paradise. New Guinea became an Australian protectorate in 1914, and this may have increased Rowan’s confidence in travelling there during a time of global conflict. During her stays in 1916 and 1917, she travelled to various islands in New Guinea in search of her subjects.

‘Birds of Paradise’ refers to birds from the family Paradisaeidae, of the order Passeriformes. It includes 42 species and 15 genera – most live in New Guinea. An abundance of food there enabled the males to focus on attracting a mate, explaining their elaborate plumage and complex mating rituals. From the 16th century onwards, explorers returned to Europe with specimens that had had their wings and legs removed, leading to the belief that the birds were born that way, possessed supernatural qualities, and were from Paradise. 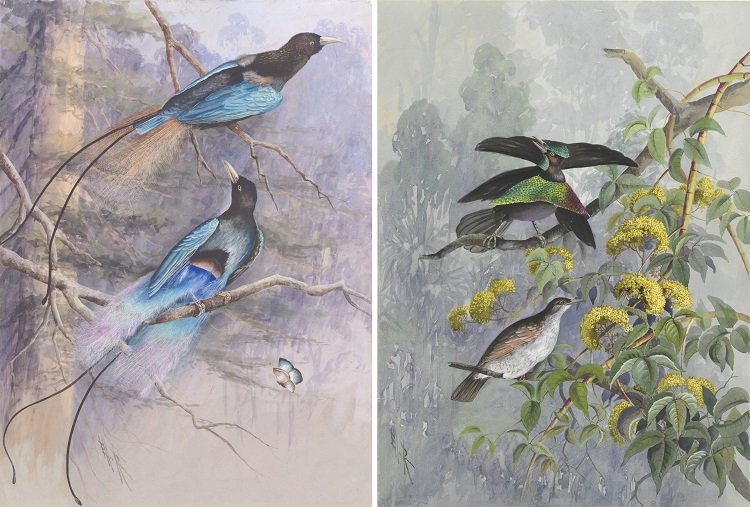 Painting live birds was no mean feat. Rowan preferred to paint birds from life, holding them in one hand while quickly painting them with the other. Often, this meant the frightened bird would peck at her flesh, leaving scratches and cuts. Some birds were mistakenly brought to her deceased, due to miscommunication with her guides. In 1918, when she had arrived home, Rowan discussed her experiences in an interview with the Melbourne newspaper The Argus:

The larger [birds] I tucked under my arm, and held in that way while I painted them. Some were very fierce and hard to hold … I covered the heads of others with handkerchiefs or table-napkins to keep them a little quieter while I was painting the body. The smaller birds I kept in cages.

She went on to describe her joy at having achieved professional goals during her trips: ‘I had the satisfaction of knowing that, under all difficulties, I had achieved my object of making a really representative and accurate record of the birds and flowers of New Guinea’. Her sense of achievement is even more significant when one appreciates that she was almost 70 years old in 1917, and this was her final extended painting trip.

As Patricia Fullerton identified in her catalogue for the National Library’s 2002 Rowan exhibition, evidence suggests that Rowan continued to paint Birds of Paradise once back in Australia, from specimens held at the Melbourne Museum. Rowan likely transferred her larger images to round fabric discs that were reproduced by England’s prestigious Royal Worcester Porcelain Company. The gold borders on the discs resemble the gold rim of the plates, showing her awareness of the specifications required for the commissioned designs. The birds on the discs have lost some of the vibrancy seen in her works on paper, and some look squashed on the round surface. 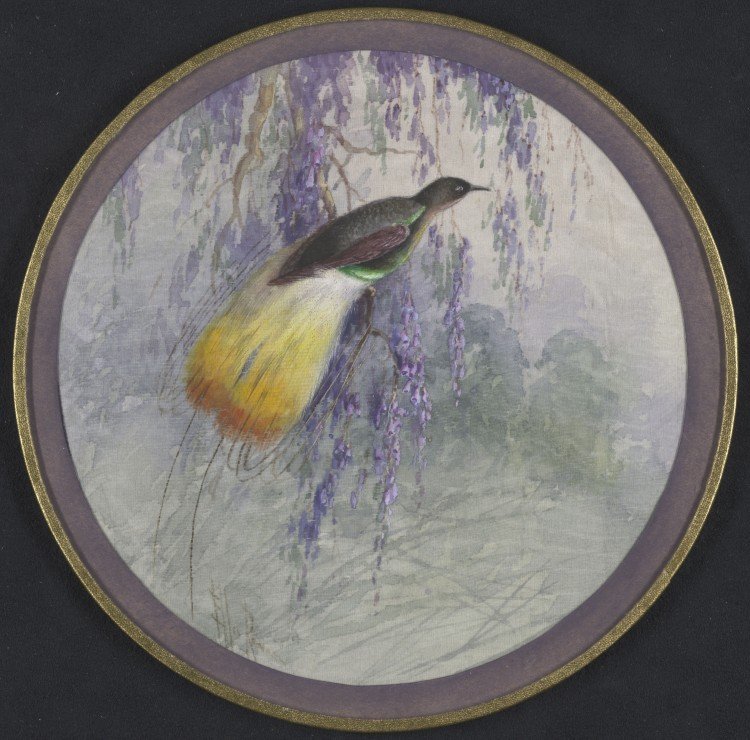 This was not the first time Rowan was commissioned by Flavelle Brothers to produce designs of Australian wildflowers for reproduction dessert and tea china. Earlier in the 1910s, a range designed by Rowan appeared as part of a series of Australiana-ware produced by Royal Worcester. Her commissions from Flavelle Brothers highlight the popularity she enjoyed in this golden period of her career and are further evidence of the strong decorative qualities of her works.

When she returned home, Rowan spent her final years trying to secure a permanent home for her works. In 1923, the year after her death, the Australian Government purchased a collection of almost 1,000 of her paintings, spanning the whole period of her working life, for the nation. The size and cost of this Rowan acquisition attests to the high regard in which her work was held.

The Library has held the Rowan collection since the 1930s. It is complemented by other Rowan holdings, including books, manuscripts, portraits and her plate designs depicting Birds of Paradise.

Birds of Paradise: Ellis Rowan in New Guinea is on display in the Treasures Gallery until 8 March 2021. You can also explore the exhibition online.