Christmas cards from the trenches

The war to end all wars. How everyone longed for this to be true in 1918, yet sadly how mistaken was this belief. Looking back from a distance of 100 years at the horror, the suffering, the unimaginable waste and futility of it all, it is easy to be overwhelmed by the statistics of lives lost or permanently shattered, and to focus instead on analysing the politics and the actions of the major players. There is a tendency to lose sight of what the war meant to so many individuals. War brings out the worst in us, but also paradoxically the best in us, and perhaps it is only by looking at the small and personal aspects that we can see our humanity, fully appreciate the tragedy, and find the strength to move forward with hope instead of despair.

A collection of Christmas cards from World War I held by the Library is a particularly revealing reminder of how Australians tried to support their loved ones overseas, and also how the troops kept up some pretence of normality and links to home in the ritual of sending Christmas cards to their families and friends. The messages on the cards show the people behind those raw numbers. 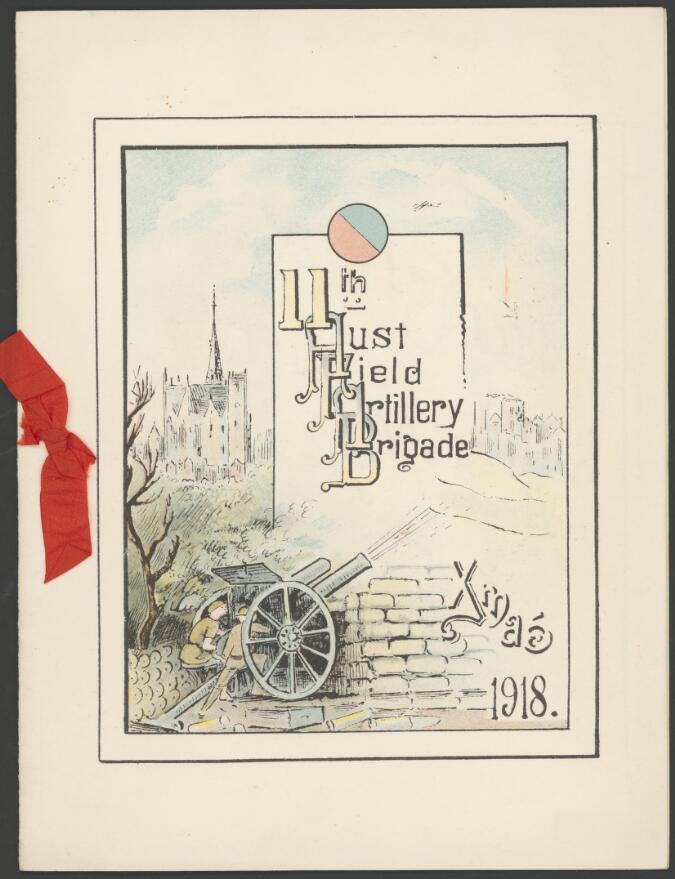 As the war dragged on, women in particular endeavoured to find ways to try and alleviate the misery of the troops abroad. The Red Cross was one of the first organisations involved, but by 1915 other organisations such as the Australian Comforts Fund (ACF) emerged. According to C.W. Bean, by this time there was some separation of the roles of these groups so they could better target their resources, with the Red Cross focusing on services to troops under medical command, the ACF to those under military command.

The aim of the ACF was to provide free 'comfort' items to all Australian servicemen. These items included singlets, socks, pyjamas, cigarettes and tobacco, razor blades, soap, toothbrush, toothpaste and reading material (newspapers and magazines). Additionally, the ACF provided recreational facilities, rest rooms, sporting equipment, gramophones and records to the troops, as well as regularly providing writing materials such as pencils, paper and postcards so the soldiers could write home.

At Christmas, there was a special effort to provide hampers to the troops containing Christmas fare and gifts, including Christmas cards. To help raise funds, people could pay a donation of 6/- to buy a special card with their name and address written on it as a personal gift to the soldier that received the hamper, letting them know that people at home were thinking of them. The cost of the card was used to pay for the other gifts in the hamper.

Blank cards produced by the ACF were also distributed to the troops so they would have something to send back home to their families. The Library holds two of these ACF cards. The first from Christmas 1918 was produced for troops in Europe. It shows coloured reproductions of scenes from fighting in France and some text giving a brief history of the battles depicted. On the back above the final picture there are the words 'AUSTRALIAN COMFORTS FUND Xmas & New Year’s greetings, 1918-1919' and at the bottom 'Greetings from…'. 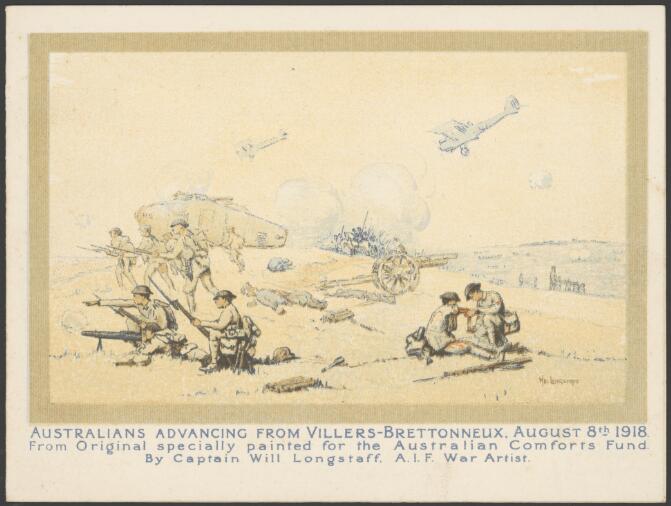 This particular card also tells us a personal story that reaches across the years back to Belgium just after the War's end. The Library’s copy is inscribed from 'Will to Mother' and dated 4/1/19. The date implies that Will might have received the blank card in a hamper from the ACF for Christmas 1918 and then sent it back from his camp in Belgium to his Mum in Australia as soon as he could. He has noted his name, rank and regimental number at the top of the card—perhaps this was something he had become accustomed to doing during his service?—so we know the card was sent by Private William Henry McGee who lived in Kellyville NSW. He returned safely to Australia in May 1919. Holding this card in my hand, I can imagine the feelings of Private McGee as he sent this greeting back to his mother—great relief at having survived and hope for a future that would see him coming home very soon. 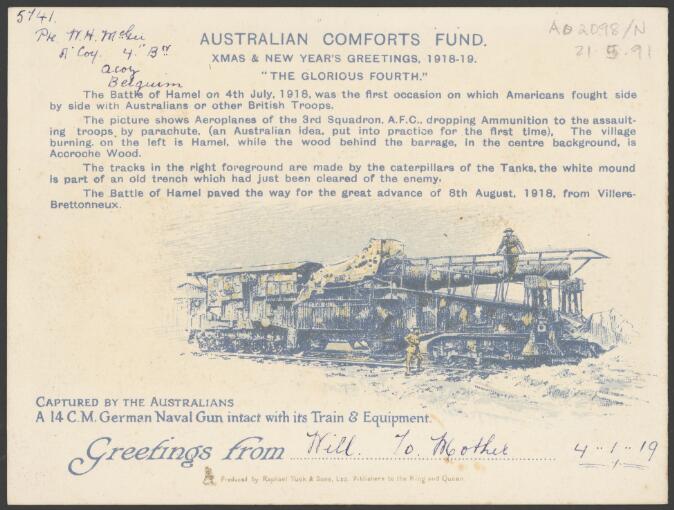 Christmas message from Will to his Mother

For troops in the Middle East, the A.I.F. Gifts Store in Cairo was the storage/distribution centre for gifts from both the ACF and other similar organisations. The Library holds an example of a Christmas 1915 card produced by the ACF for distribution to the troops. The card was printed in Cairo, probably due to the cheaper costs, and has 'A.I.F. Gifts Store, Savoy Hotel Cairo' on the cover. It optimistically uses the imagery of the returning boomerang on the front cover with the words 'I go out to return' and above the boomerang 'Christmas 1915'. The text inside the card says 'Wishing you a Happy Xmas and all good luck through the coming year from The Australian Comforts Funds.' On the facing page there is a poem and on the back cover a quote from Kipling 'Who lives if England dies? Who dies if England lives?'. You can see the morale boosting intent, trying to convey both a message of support and the belief that the soldiers would soon be heading safely home. 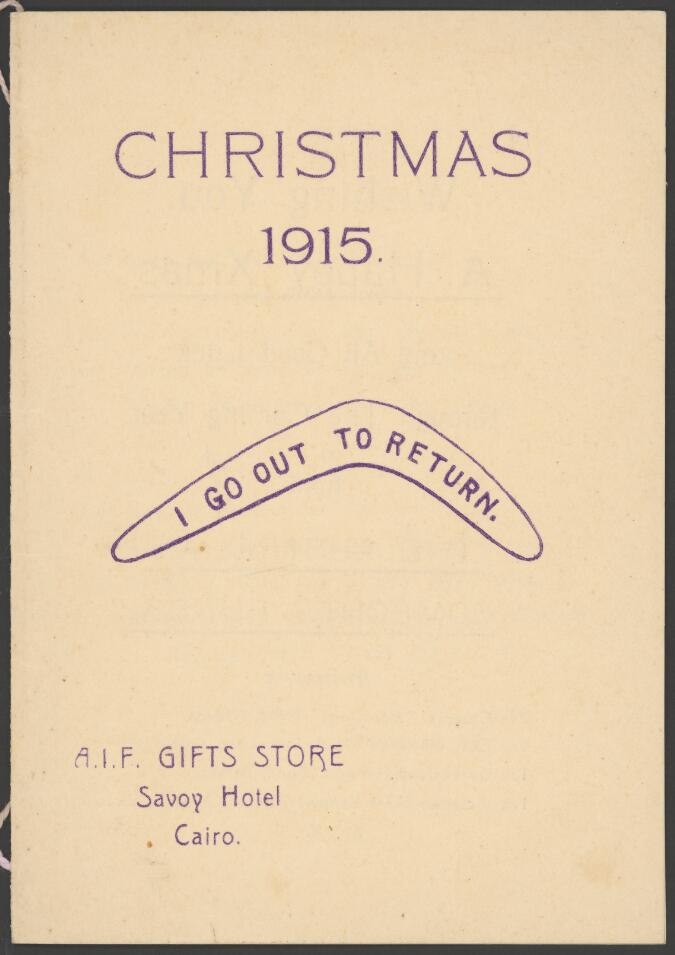 Many of the military units also produced their own printed Christmas cards for the soldiers to send back to their families. Some of these military cards are rather beautifully designed. They usually bear an official Australian Commonwealth Military Forces logo on the front and several make use of artwork produced by serving soldiers. An example of this is a card titled 'Christmas Greetings from France'  – and how incongruous that sounds when we think of the appalling conditions in the trenches! The cover has a drawing of two Australian diggers eating from their tin plates. The artwork is signed Bernie P. Bragg, and he has rather cleverly hinted at the bitter cold of a Christmas in France by showing the diggers propped against a wall that is dripping with icicles, with the red nose of one of the diggers conjuring up the chilly nip of frostbite. Subtle enough to pass the censors, yet making a bitter contrast with those warm Christmas greetings. It comes as no surprise that Bragg was a draughtsman before enlisting in 1916. Bragg's talents were recognised as useful by the military and he was given the job of regimental draughtsman at the 15th Brigade Headquarters, responsible for drawing the maps and diagrams used by the regiment as well as producing some lovely cover art for the official Unit War Diaries of his 15th Infantry Brigade. 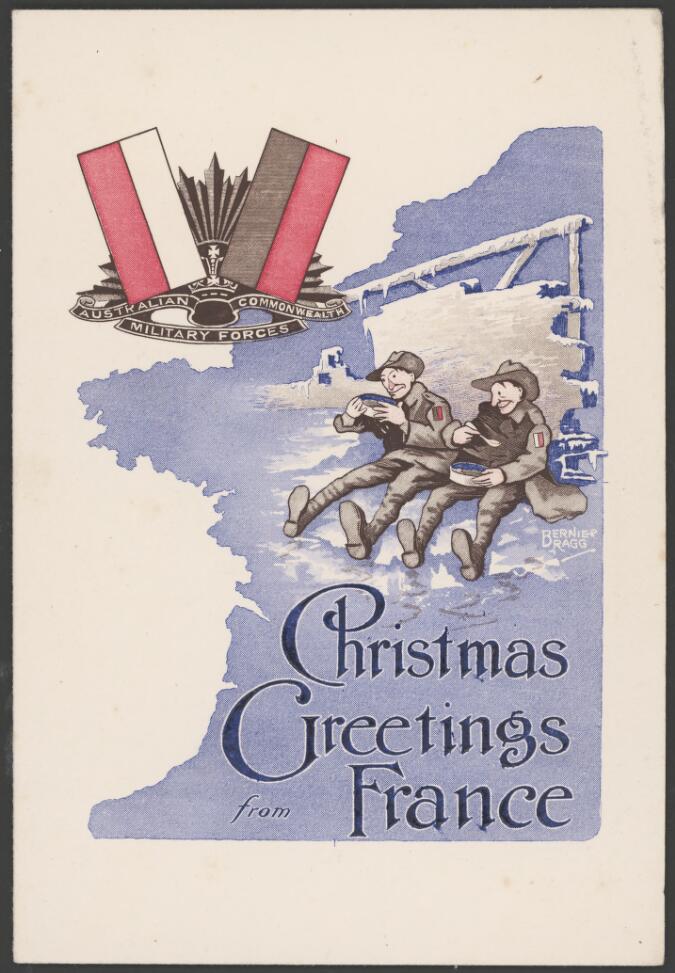 Card with artwork by Bernie Bragg

Another soldier's artwork also features on two Christmas cards held by the Library. H.H. (Herbert Horace) Chappel was a Gunner in the Field Artillery Brigade, Reinforcement 29. His occupation was listed as 'Agent & Indentor' on his WWI enlistment record, but he obviously had a flair for drawing that was recognised and utilised by the Army.

In this card from the 4th Australian Divisional Artillery, Chappel’s portrait of a soldier appears on the cover  - full of character with just a hint of a cheeky grin lurking behind the official exterior. Some of the drawings inside are also initialled 'H.H.C.' 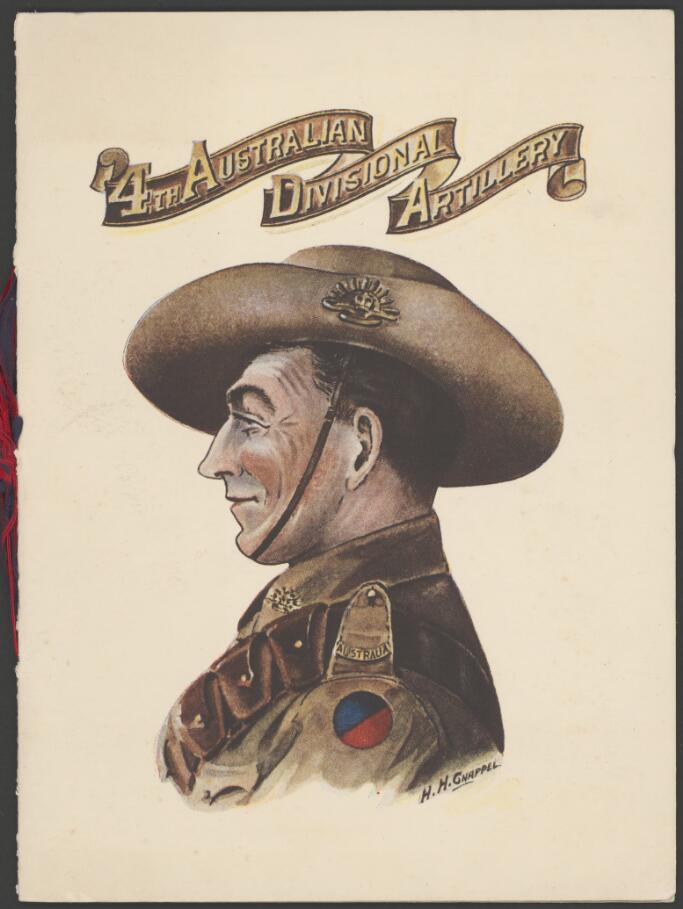 Card with artwork by H.H. Chappel

In a card from the 11th Aust Field Artillery Brigade Xmas 1918, Chappel's signature appears on the drawing on the final page, but the entire card may be his work. 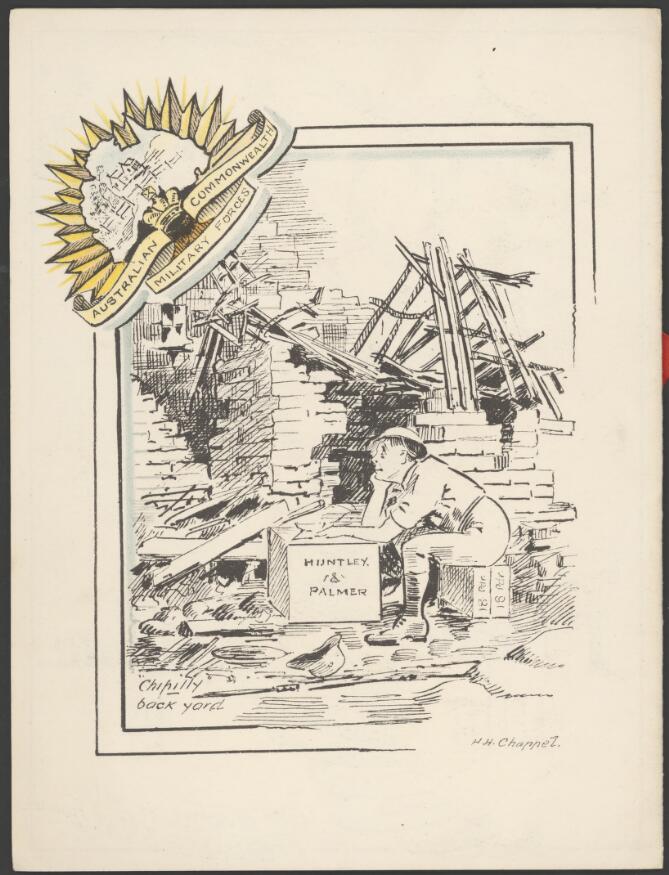 Card with drawing by H.H. Chappel

This card is another that tells a tale and allows us to step briefly into the life of one Australian soldier. It has been signed 'To Mrs Snowball From E.W. Burbidge'. This E.W. Burbidge was Eustace Wardle Burbidge, born near Ballarat, but who moved with his family to Green's Creek, Gympie Queensland while still a child. His occupation on enlistment was Dairyman and he was single at that time. I wonder who Mrs Snowball was? She doesn't appear on the electoral roll for Gympie at this time. The rather formal dedication on the card indicates she might have been a family friend – perhaps an old neighbour from Eustace's days growing up in Ballarat? Was he keeping up the annual tradition of sending her a Christmas card despite fighting far away? Or might Mrs Snowball have been someone who signed an ACF Christmas card that Eustace received in a Christmas hamper and he was sending one back to her in return? A nice thought if one little connection was made here instead of broken. Happily, Eustace survived the War and came back to Gympie where he married Amelia Anderson in May 1920. He lived on a dairy farm called 'Noit Celes' near Gympie, and had a registered brand UJ7B for his herd. Eustace died aged 81 in 1974. 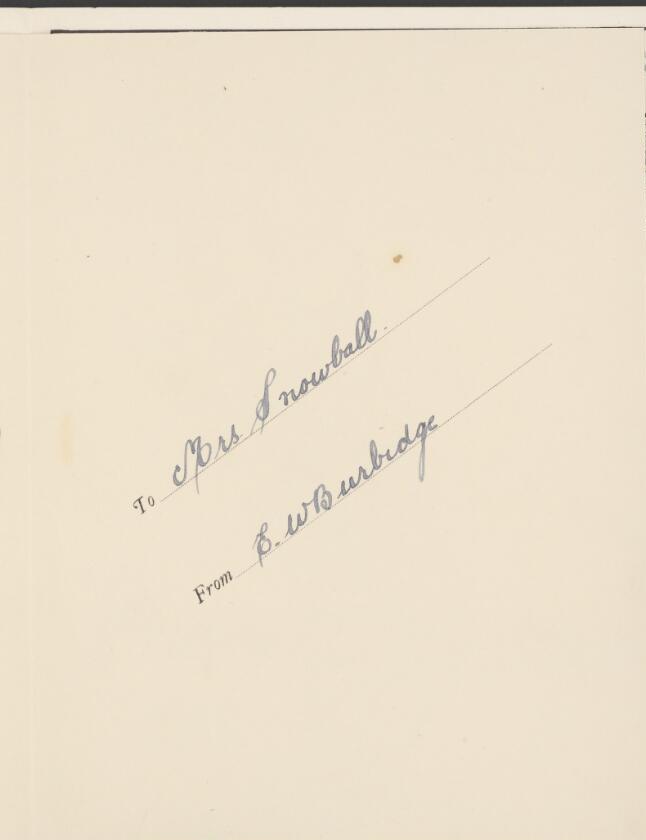 The iconography and messages inside each of the Christmas cards strongly evoke both the senseless futility of war and conversely the humanity of the individuals involved. A Christmas 1917 card from a soldier to his sweetheart carries the simple message written in pencil 'Wishing you a Merry Xmas and a Happy New Year with love to Alice from Percy x'. That poignant ending of an 'x' for a kiss reaches out emotionally to us all. This is not a statistic, this card shows us a young man separated from someone he loves to fight other young men also separated from the people they care for. Did Percy ever return to his Alice? 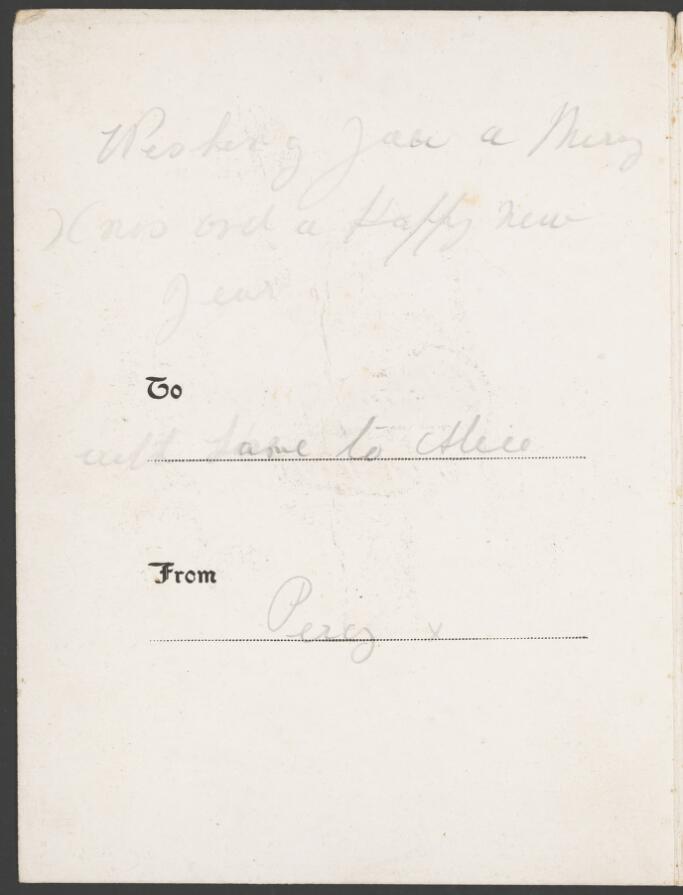 Card from Percy to Alice

I think the card that touched me most deeply is Season's Greetings, Christmas 1917, from the Trench Mortar Batteries, First Division, Australian Field Artillery AIF. Inside is the message 'From Jim wishing you a Merry Christmas & a Happy New Year To Mary & Alec' and it also includes the following handwritten note:

Just a few lines hoping to find you all quite well as this leaves me at present. The weather is terrible mud up to your waist & Winter only starting. Dear Alec, I hope you received poor Jimmy Elvins photo safely. I have seen Rusty a few weeks ago. Well Mary & Alec I will wishing you all a Merry Xmas & a Happy New Year. Love to little Alec & all the children xxxxx. 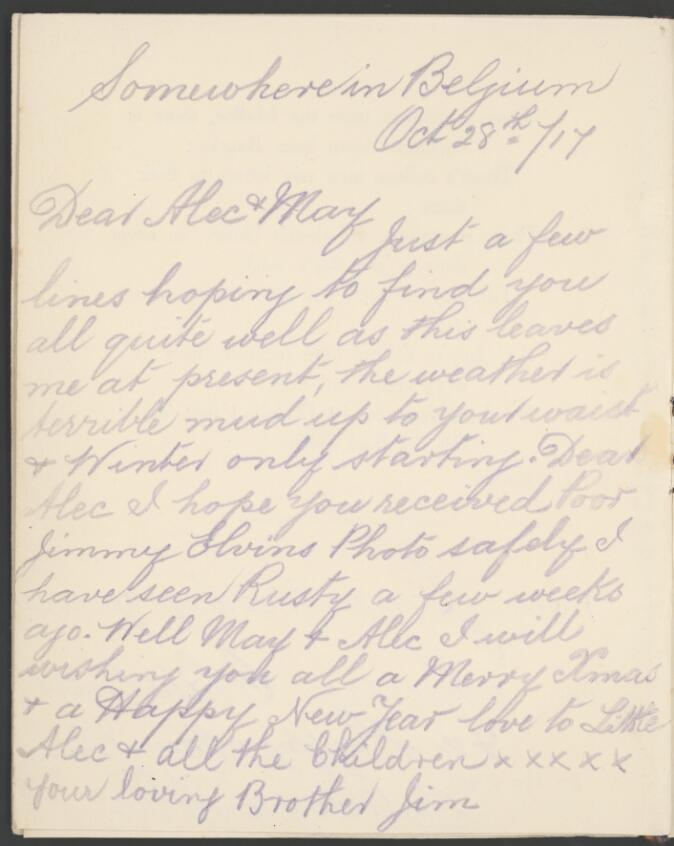 The Jimmy Elvins that Jim refers to was James Hawkey Elvins who was killed in action on 20 September 1917. Like many soldiers, he has no known grave site. Jimmy Elvins was a carpenter, born in Yarrawonga Victoria, who served in the 7th Australian Infantry Battalion. Jimmy Elvins must have been a friend of the Jim who wrote this note and had the sad duty of sending home a last photo of his mate, probably asking Mary and Alec to pass it on to Jimmy’s parents.

This card with its note from 'Somewhere in Belgium' reaches out to me over the years and I imagine the card sitting with pride of place on the mantelpiece of Mary & Alec that Christmas of 1917 as they told little Alec and the other children that the card was from their Uncle Jim. Did Jim return home to his family and see Mary, Alec and the children again? I hope he had the chance to watch them grow up and to live the rest of his life in safety and happiness. What he would never have imagined is that almost 100 years later, his words would be part of our nation’s history. A memory from the past, preserved for the future in the collection of the National Library of Australia.