This year, the Penrith Panthers meet the South Sydney Rabbitohs in the grand final at Lang Park in Brisbane. In this blog we’re going to tackle the task of sharing some highlights from our collections.

In 1908, South Sydney took part in the inaugural season of the New South Wales Rugby Football League (NSWRFL), Australia’s first rugby league competition. The Rabbitohs would play in the grand final against Eastern Suburbs, winning 14-12 in a game ‘which was brilliant, and at times rather rough’ according to a report in the Sydney Morning Herald, available through Trove:

The final match to determine the premiership in the first grade of the Rugby League was played on the Agricultural Society’s Ground on Saturday in perfect weather. In accordance with the League rules, one-third of the profits of the match will be devoted to charity ... The winners deserved their victory. 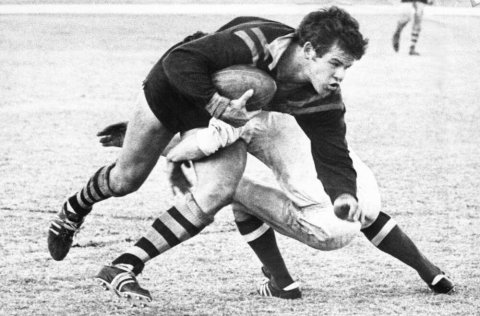 The Penrith Panthers, meanwhile, were admitted to the NSWRFL in 1967; their first match as ‘another new team’ reported in the Canberra Times:

In other games today to complete the first round, newcomers Cronulla upset Eastern Suburbs 11-5 at the sports ground, and Canterbury defeated another new team, Penrith, 15-12 after trailing 4-9 at half-time.

Congratulations to those babies of the Rugby League premiership, Cronulla-Sutherland and Penrith, on their exceptionally fine introduction to the first grade competition last week … Penrith’s great battle to lead most of the way against Canterbury [was] most heartening.

The Panthers endured a tough start to life in the NSWRFL, only reaching their first finals series in 1985 before a first grand final appearance in 1990, ending in defeat against the Canberra Raiders.

The following year, they would meet the Raiders in the decider yet again, this time winning their first premiership at the Sydney Football Stadium. While Penrith celebrated, Raiders fans—including Canberra Times journalist Tom Connors—still found cause for optimism:

At least there is some consolation at the end of the football season—we will be hearing a lot less about Ricky Stuart’s groin, the most famous and most written-about groin in football history.

South Sydney have won 21 premiership titles, with golden eras spanning the early part of the 20th century, the 1950s, and the late 1960s toearly 1970s. After winning the 1971 grand final, few would have bet against the Rabbitohs continuing their run the following season, yet they would wait 43 years before lifting the premiership again. Rugby League Week duly dubbed 2014 the Year of the Rabbit, describing the atmosphere at a pub in Alexandria:

The air is thick with the fug of grand final fever ... The pub is like a huge human aviary, buzzing with that thick noise of a thousand folk who’ve been on the cans ... Greg Inglis goes for a monster run, and in this pub, your pub, every pub in Australia a Souths supporter roars him onwards, ‘Go!’

A Festival of Football

The National Library of Australia holds a complete run of Rugby League Week and Big League, two bibles of rugby league print coverage in the 1980s.

There is also a digitised archive of copies of Rugby League News, the predecessor to Big League, with editions from 1920-1974.

With a Library card, you’re able to access editions of Rugby League Week between 2003-2017 from home.