A Closer Look at Pigments

The Meiji period of woodblock printing in Japan was characterised by the distinctive reds, blues and violets that became available to woodblock printers and artists working in Japan. Analine dyes and commercially manufactured pigments broadened the palette used by the Meiji artist to create vivid scenes and blocks of eye-catching colour, particularly eye-catching reds that characterise this era of Japanese art. The facilitation of imported pigments during this time also allowed the Meiji artists freedom to develop special effects like sharper tones, gradation of colour across an entire image (bokashi), and embossed patterns (karazuri), and the use of metallic pigments (burnishing).

Ultraviolet (UV) light, or black light, analysis of the beautiful woodblock prints in the Melodrama in Meiji Japan exhibition, has given us new information about the different pigments used in these art works. The UV image below illustrates the red pigment as a hot orange-yellow colour. The fluorescence given off by this pigment is typical of Japanese madder, which we originally thought to be dragon’s blood. 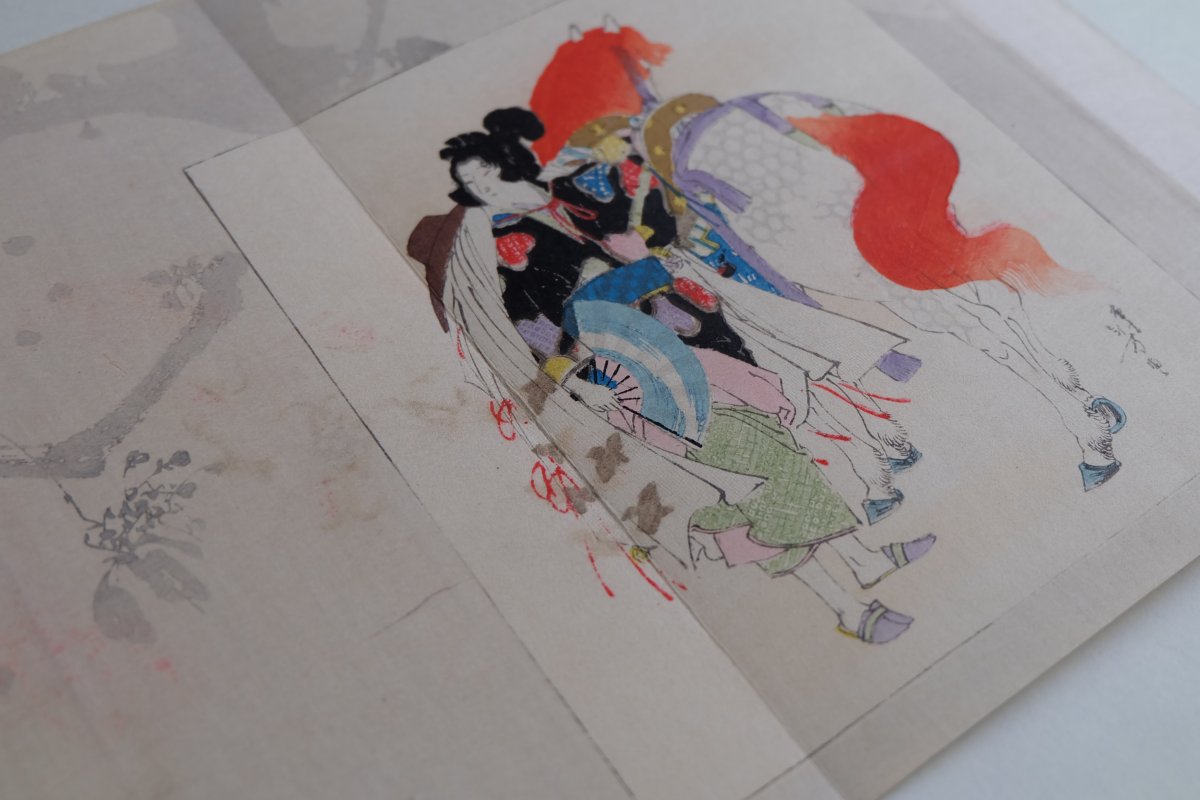 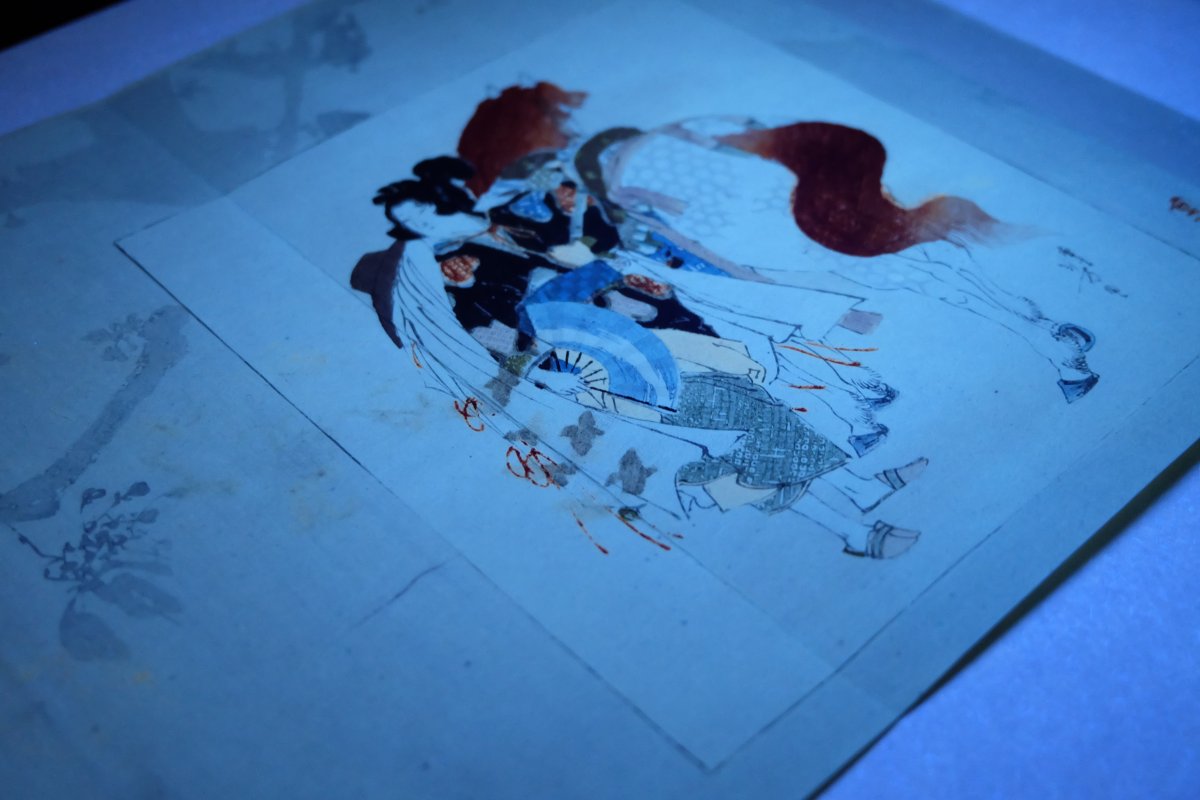 Other pigments commonly used in the Meiji period are Safflower, Prussian blue, Conchineal and Red Lead. Carthamin and purpurin content in these pigments fluoresce quite differently under UV light, aiding conservators in identifying pigments in an artwork. All of these pigments produce various fluorescence or absorbance of UV light. UV light, is a particularly useful analytical tool commonly used in the Preservation labs at the Library to aid with the identification of a wide range of substances, leading to a better understanding of the life or history of an object. 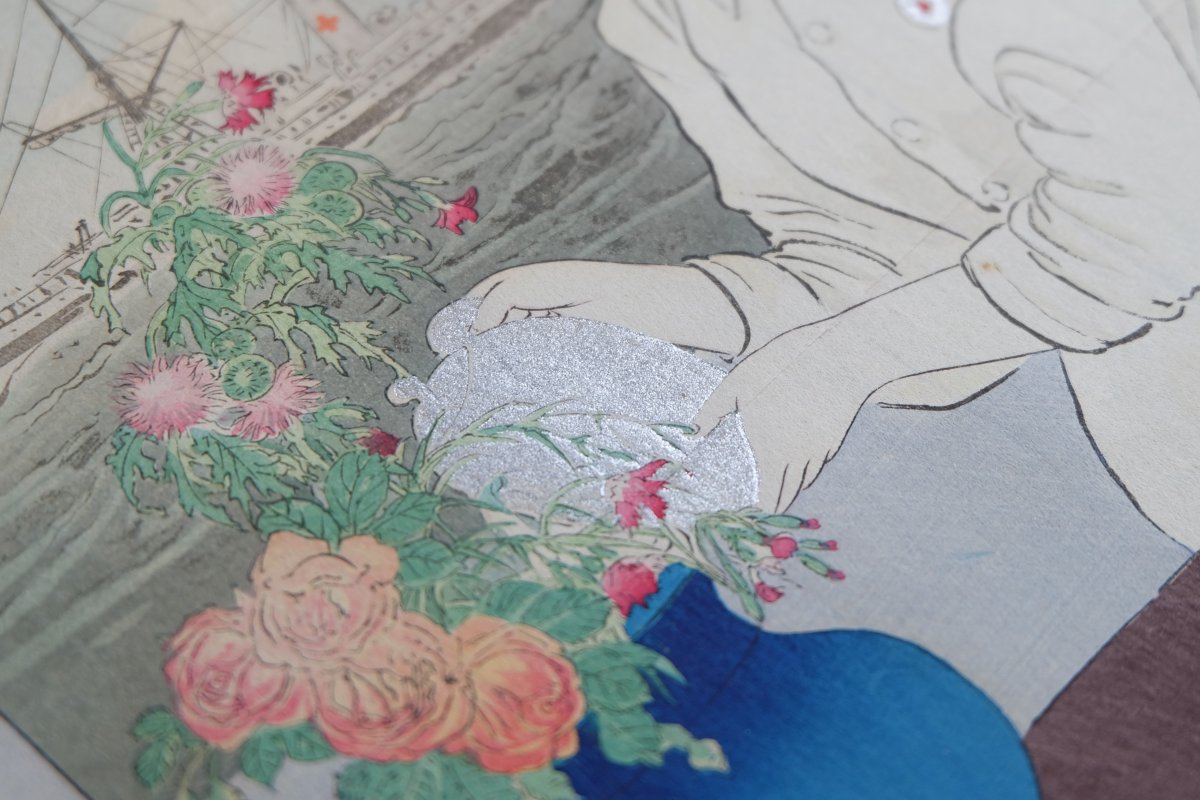 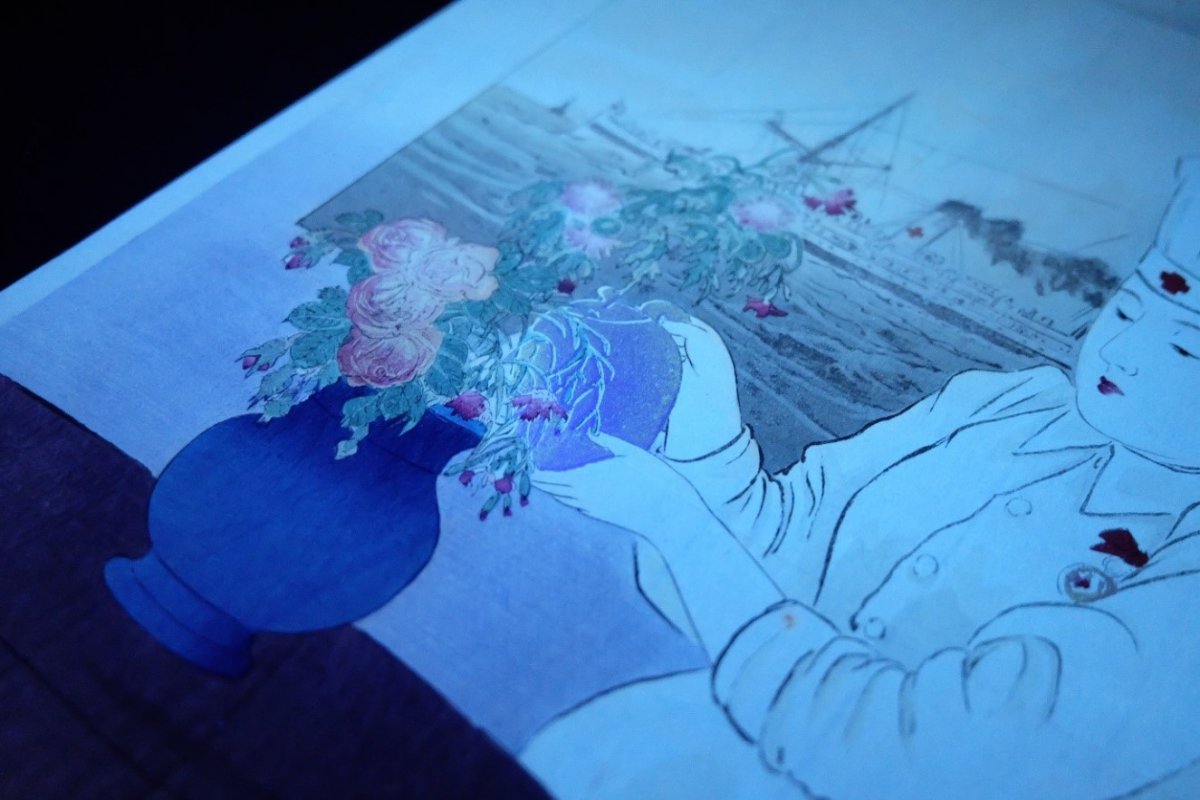 Another useful analytical tool that we have recently aqcuired, is Refectance Transformation Imaging, or RTI. This method allows us to closely view the surface details of an object by moving the light source over an interactive 3-dimentional shape of the object created by capturing a number of still images with the light source in different directions, highlighting various surface features through raking light. 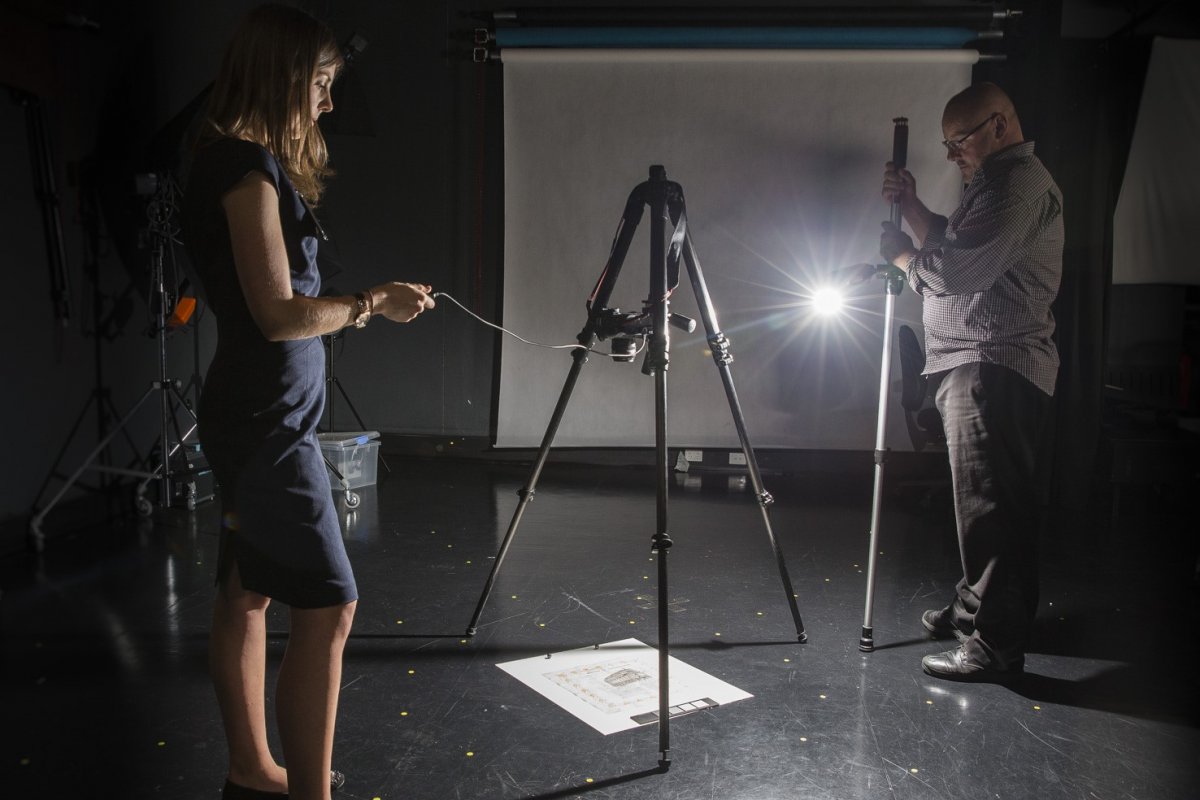 Image: Craig Mackenzie, photographer, and Freya Merrell, conservator, moving the flash to calculated positions rotating around the object as several photographs of an object are taken to create an interactive 3-dimentional image using RTI software (photo by Samuel Cooper, photographer). 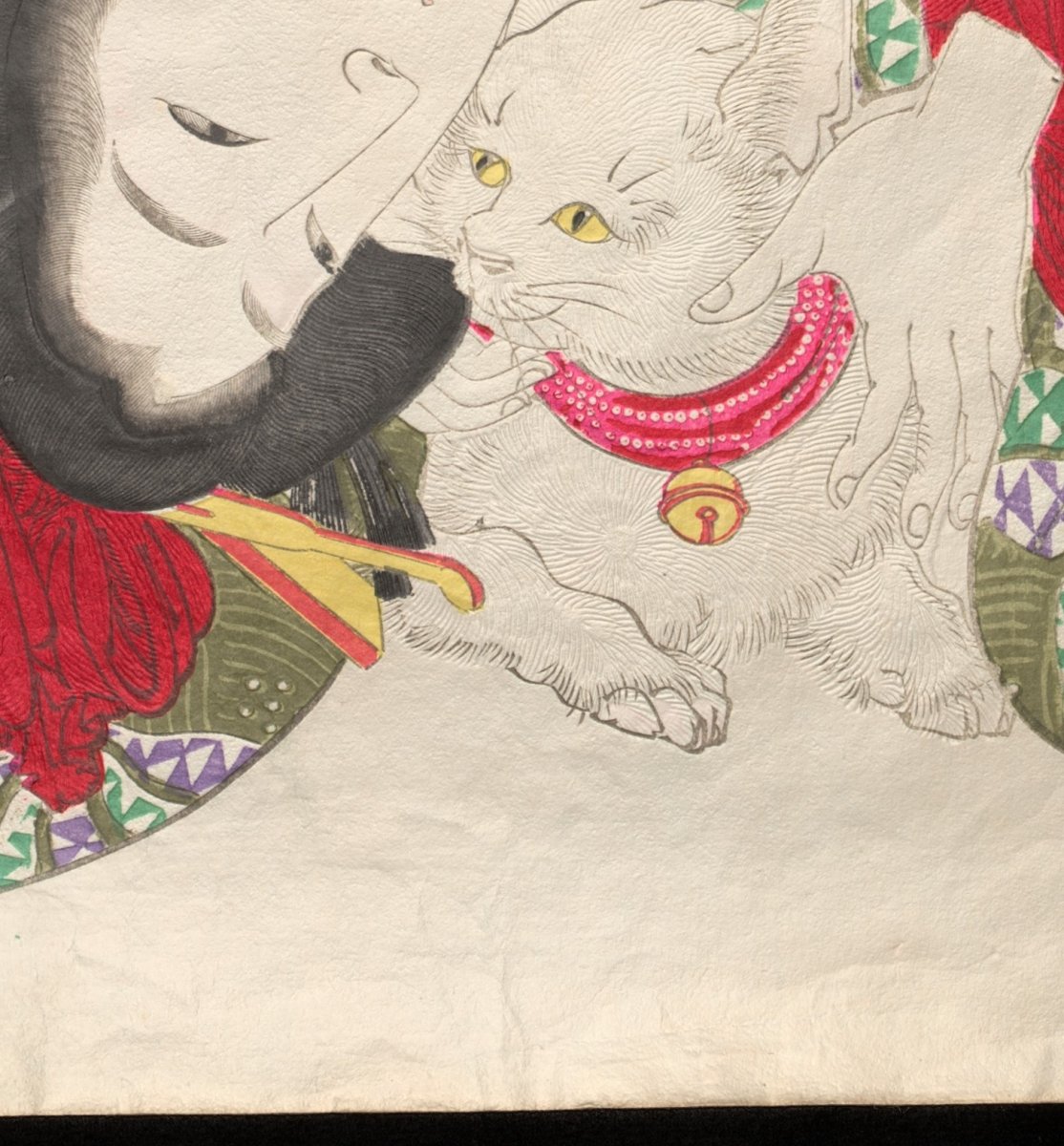 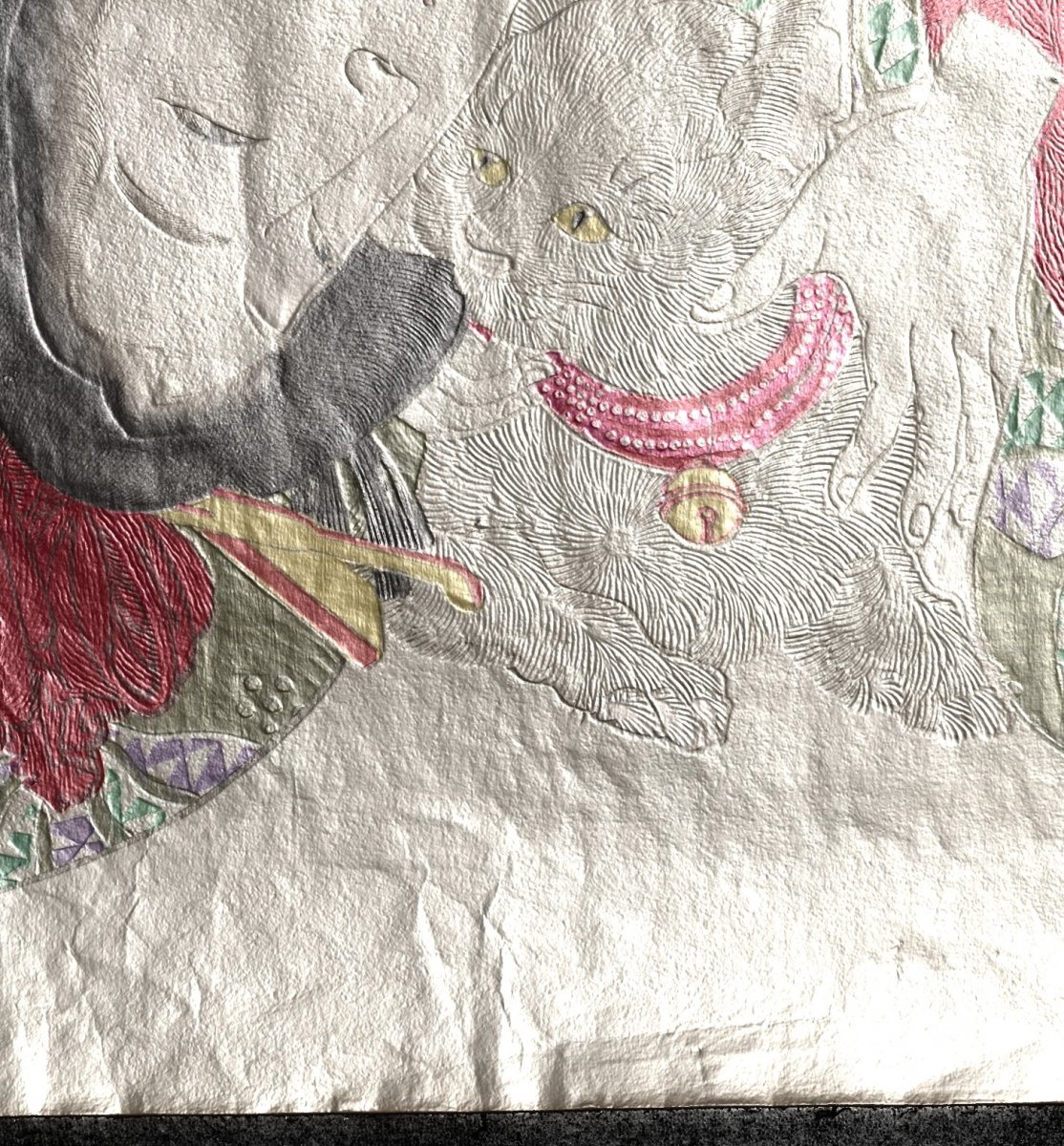 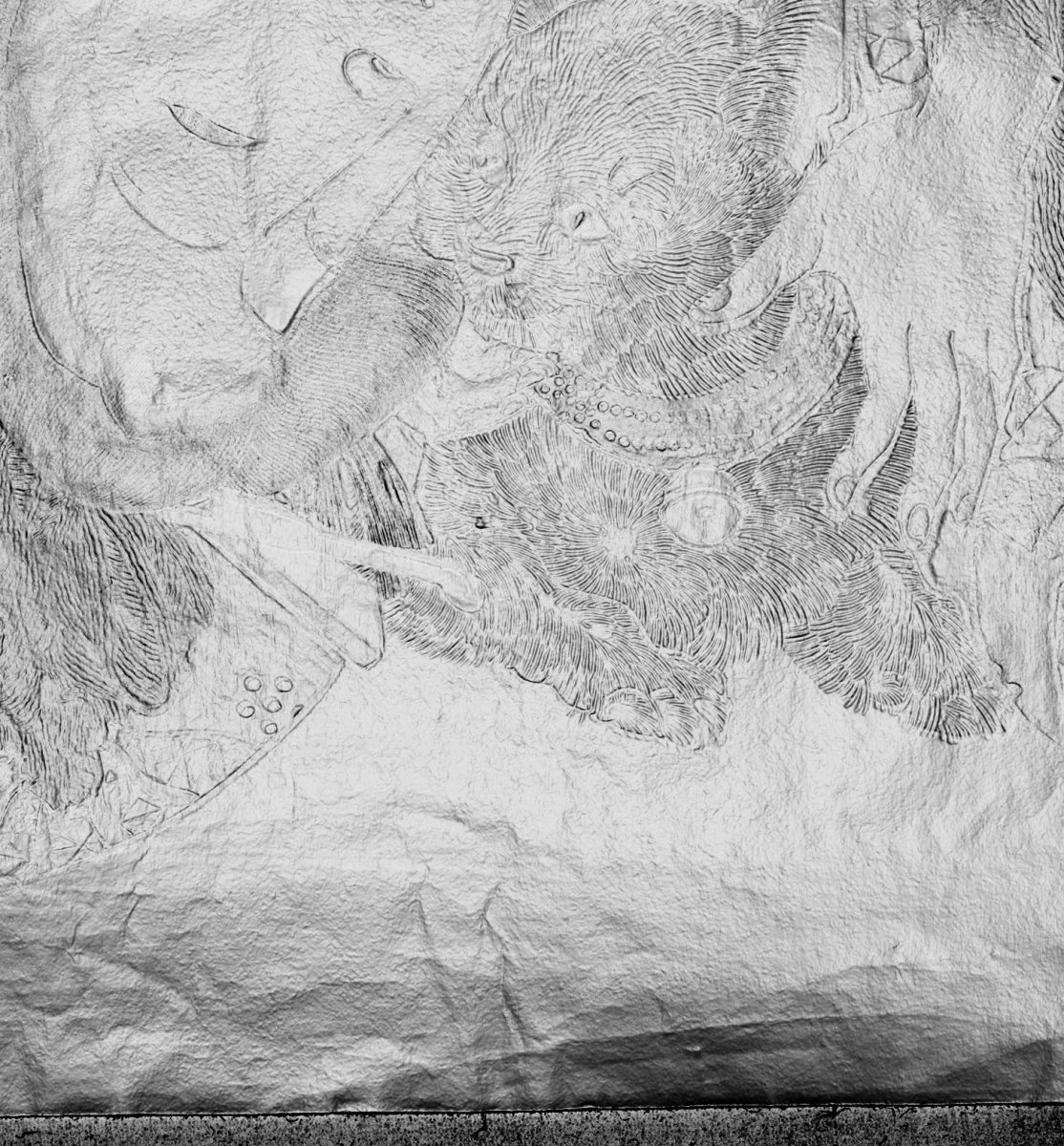 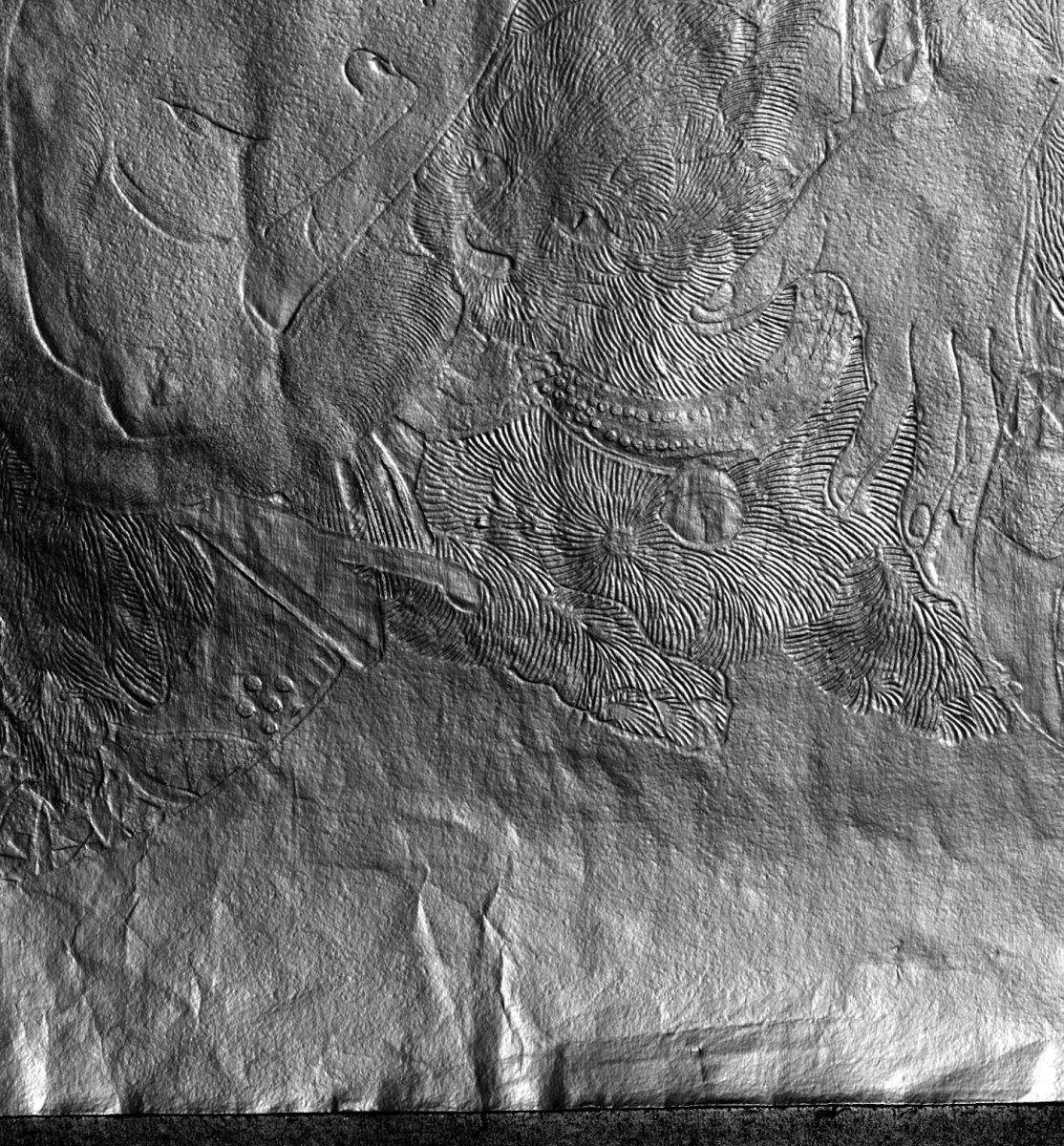 In the image above you can clearly identify the indentations from the woodblock, and the pigment sitting on the surface.

This technique is a powerful tool that can allow us to easily identify and capture features not easily seen with the naked eye, such as flaking pigments, creases or undulations, scratches to the surface, or levels of media. It also facilitates a number of conservation procedures such as research, documentation, and treatment. This technique can be used with objects small and large, and is particularly useful for sensitive or fragile items, providing a non-destructive method of interactive electronic photography.

Treatment of a Meiji woodblock print

In preparation for an upcoming exhibition, the Preservation team assess the chosen objects for any damage that may put the item at risk when displayed. For Melodrama in Meiji Japan the item below required a few stabilising repairs due to the fragile, uneven and slightly mouldy right edge. This woodblock print (below) is printed on a fine handmade Japanese tissue.

Japanese paper is sturdy and long wearing unless it has been damaged due to friction, punctures, mould, or other similar mechanical, chemical or environmental deteriorating factors. Depending on the thickness of the paper, it may become weaker and susceptible to losses, tears and soft wispy edges. 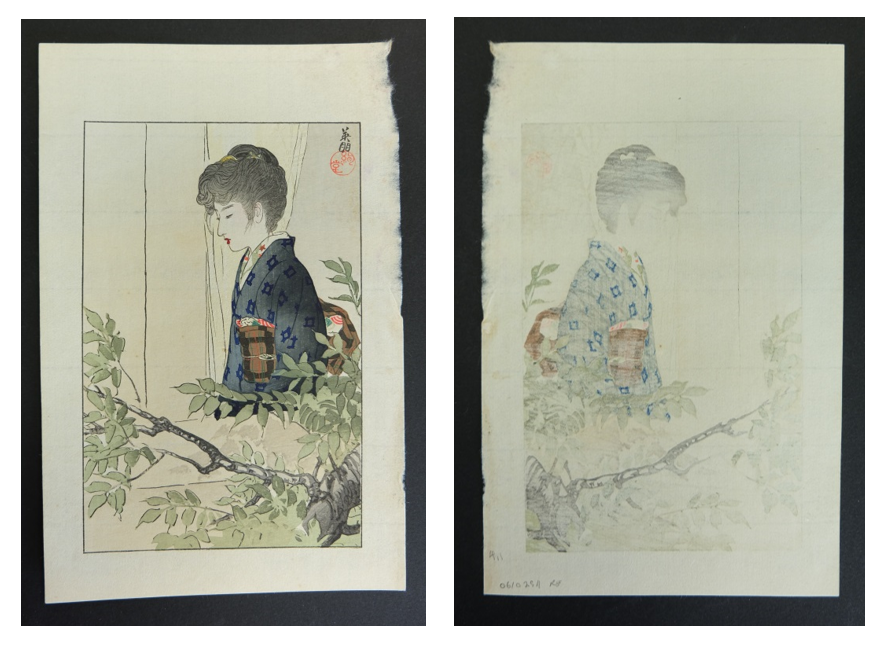 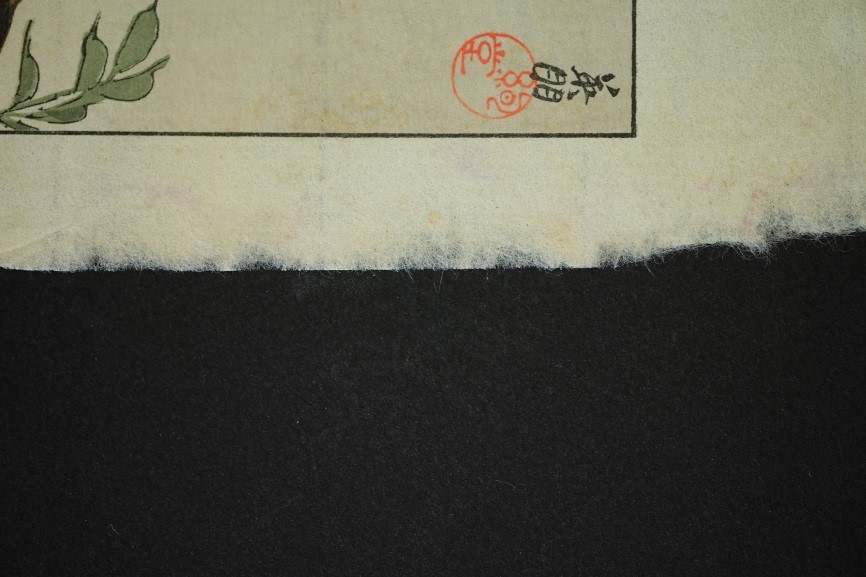 Repairs are made with a Japanese tissue of a similar weight (slightly less weight) and tone to the object being treated. It is important to have a weight that isn’t too heavy as it will distort the original paper, and a tissue too light in weight won’t give enough support. The Japanese tissue is adhered with a reversible wheat starch paste and de-ionised water mix, which is prepared weekly in the Preservation lab. 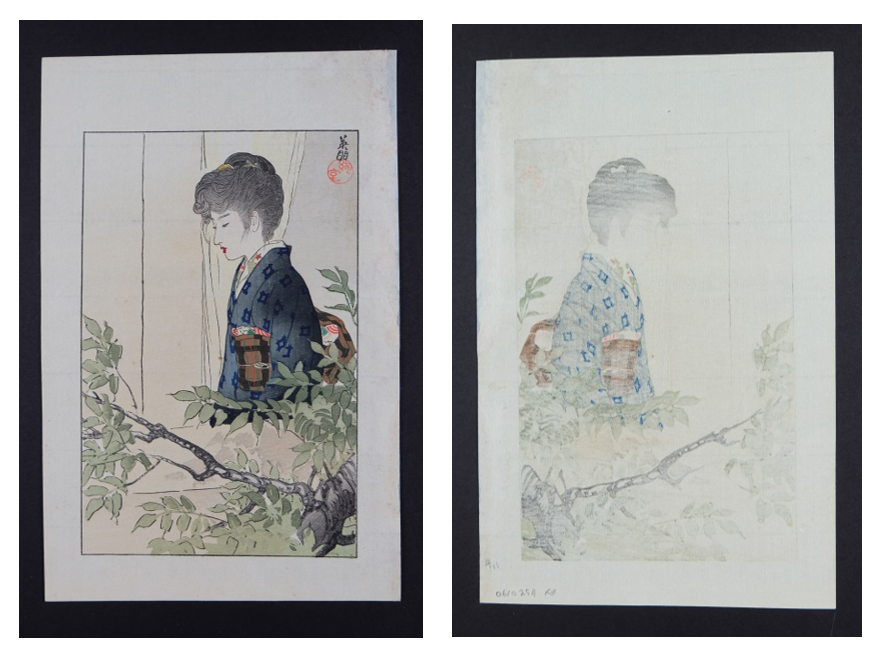 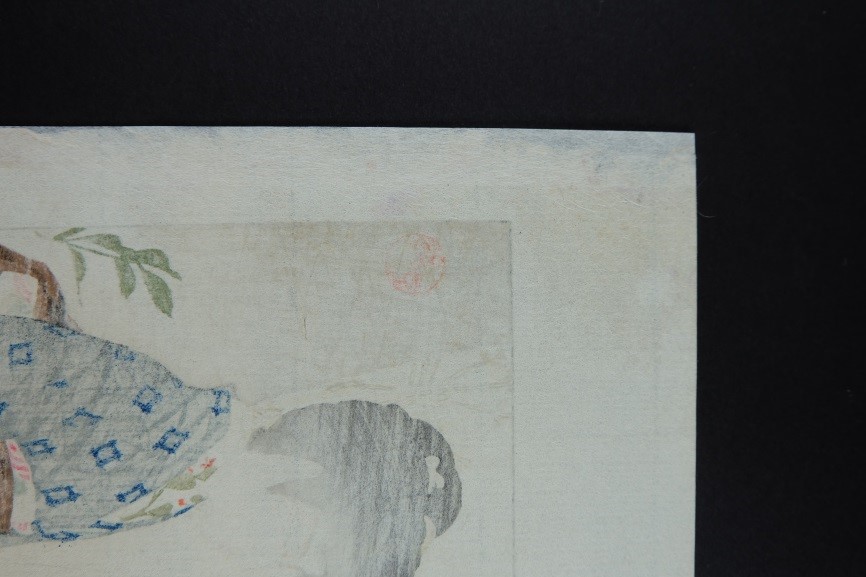 Image: After treatment detail of edge from front. 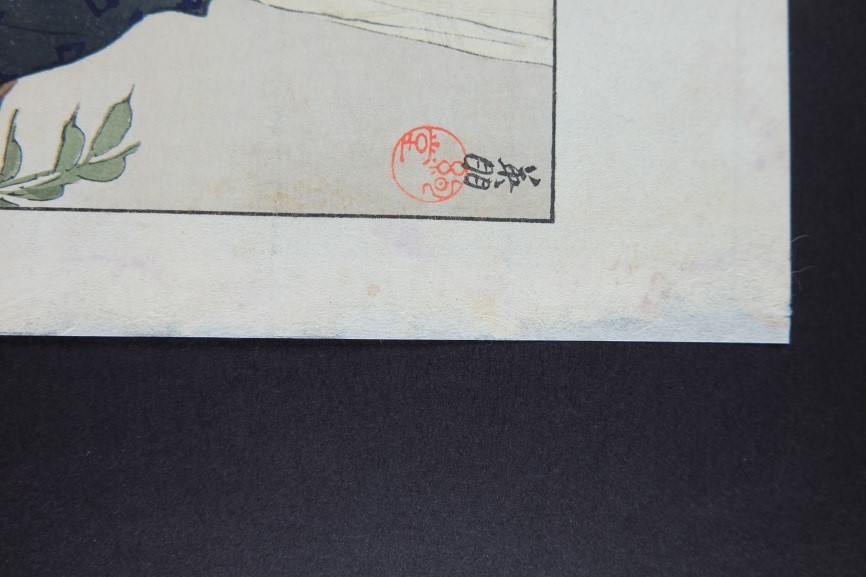 Image: After treatment detail of edge from back.

Some of the items requiring treatment were bound, and logistically these are a little harder to treat as they are still attached to the volume and require in-situ treatment, meaning you may not be able to access the entire print or manoeuvre it to a more desirable position for easy repair.

This item, like many of the bound volumes that will be on display, required flattening of creases, tear repairs and a light dry cleaning of the prints bound inside. Repairs were also undertaken to the associated slip-case. To reduce the crease in the lower left edge, the fibres were locally relaxed by lightly brushing a conservation grade mixture of deionised water, isopropanol and methylcellulose, that allow the fibres to fall back into alignment without causing any movement of degradation products that have accumulated over the past century and could create a tideline. This method also reinforces the paper with some strength from the methylcellulose that will make it less likely for the paper to deteriorate in that area.

In conservation, there are often risks associated with every treatment, which must always be considered as we aim to increase the longevity of the item and retain all forms of significance the item may have now or in the future. In this case, some areas were not treated, like the vertical crease visible in the woman’s black hair, due to a variety of factors where there was a higher risk of causing more harm to the object than good. Firstly, the way the crease was formed during manufacture could likely cause dimensional issues once flattened and since the crease is not disguising any written text, it was decided to let it remain. Secondly, the solubility of the inks also plays a factor whereby the treatment will likely cause unnecessary bleeding or movement of the media. 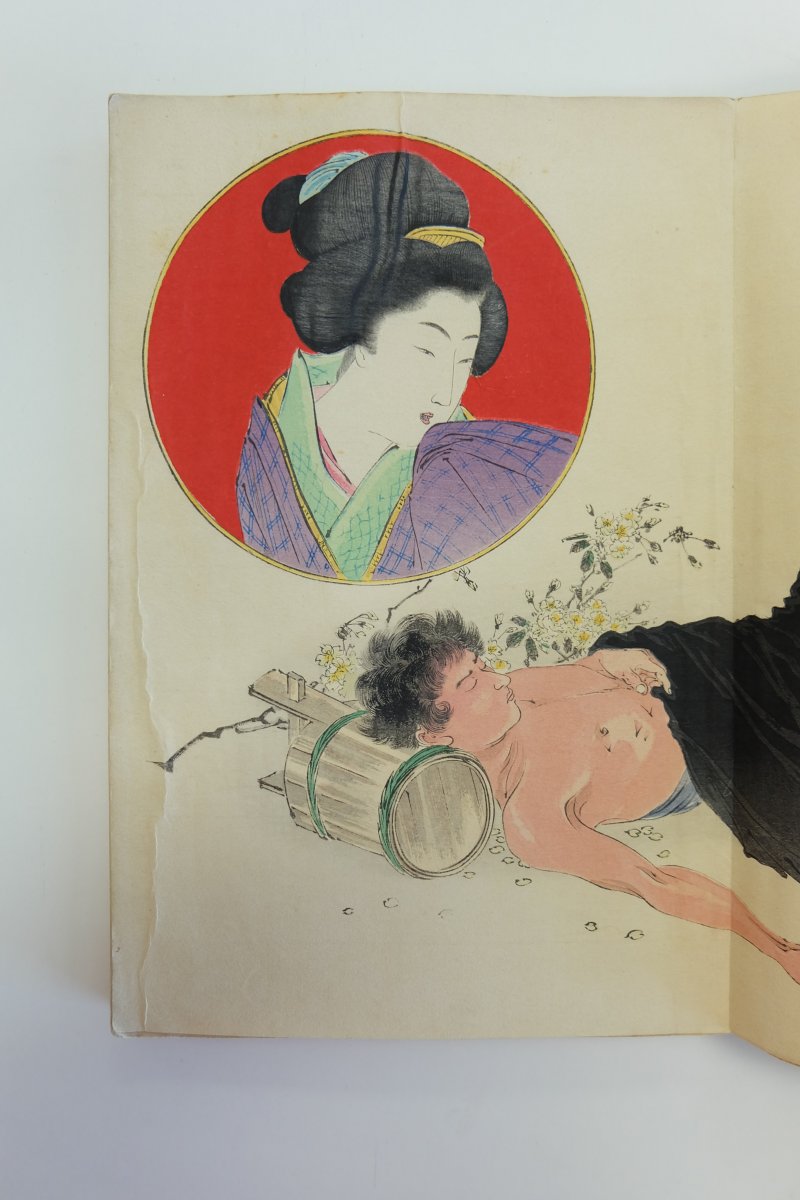 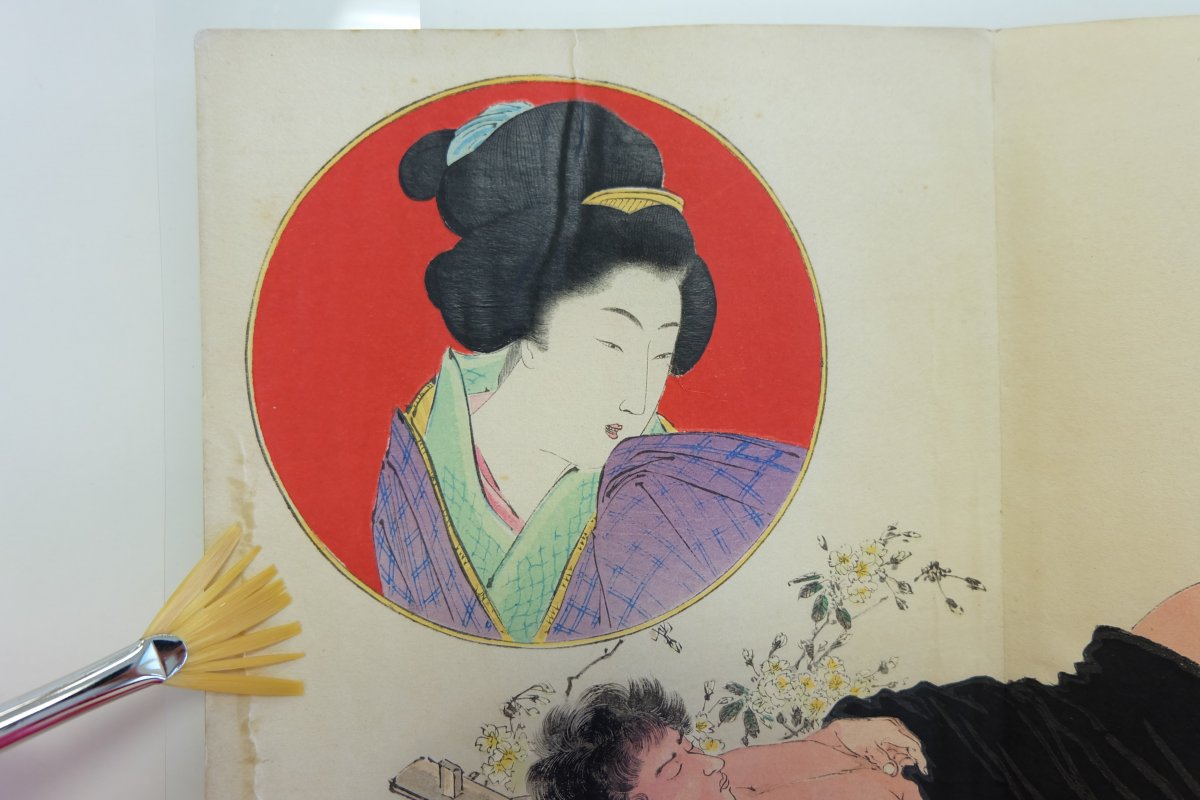 Image: During treatment, applying conservation grade solution to relax the paper fibres back into position and provide strength and uniformity back to the paper (OJRB 183 – Bungei kurabu, catalogue record: http://nla.gov.au/nla.cat-vn4763587). 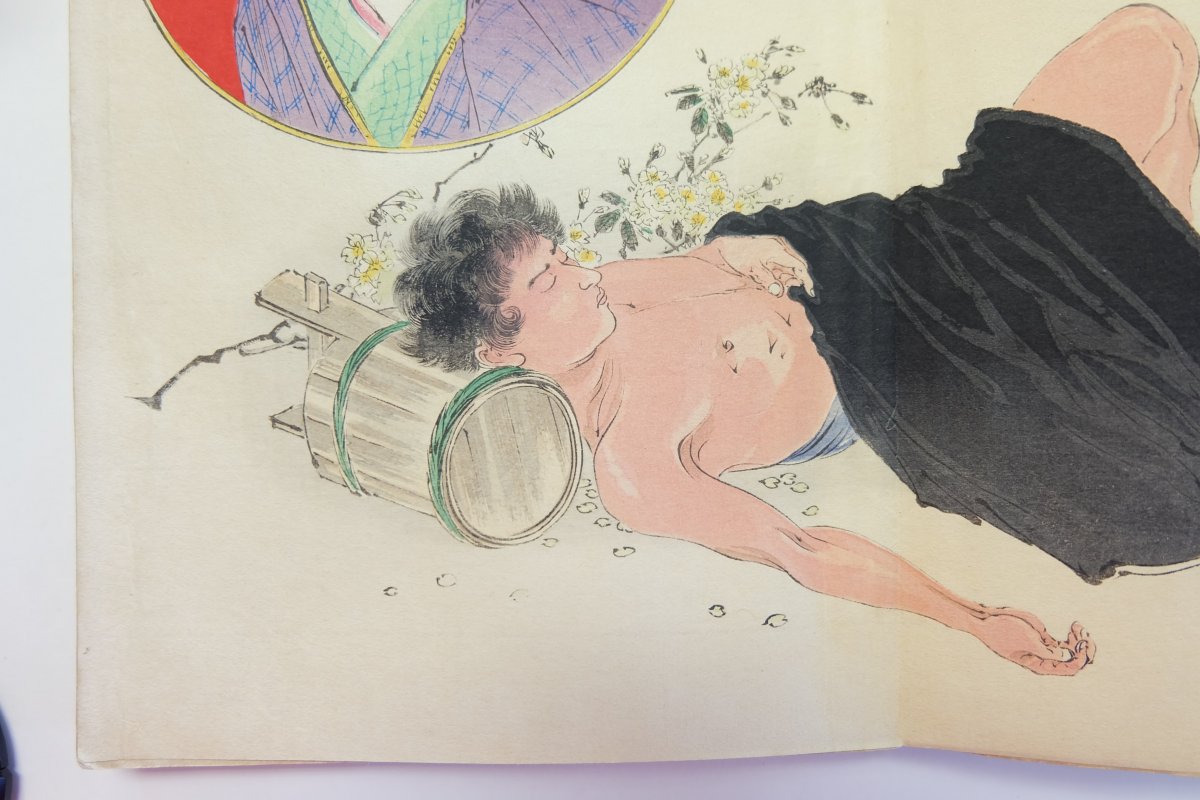 Image: After treatment close up of the creased edge that has now been relaxed and weighted while drying. (OJRB 183 – Bungei kurabu, catalogue record: http://nla.gov.au/nla.cat-vn4763587).

After the Preservation team had documented the condition of over 120 items, treating those that were a bit too fragile for display in their current state, and preparing them for exhibition, the objects for Melodrama in Meiji Japan are now on display in the gallery. This wonderful exhibition will be on display until 27 August 2017, so come and take a look!

Don't miss Part One of this blog, which covered the techniques behind woodblock printing and the materials used to create them.