On this day, 19 March 1790 – 230 years ago – HMS Sirius was wrecked on a reef just off Norfolk Island, a ‘melancholy loss’ indeed for the crew, those on the island and for the new colony of New South Wales. Sirius had been the flag ship of the First Fleet, remaining, with the smaller Supply, when the other ships departed. Under Captain John Hunter, it had already saved the colony from starvation once by sailing to the Cape of Good Hope for additional provisions, and was on a second mission, this time to China. But first it was to transport 275 convicts and marines to tiny Norfolk Island, over 1500 kilometres away in the Pacific Ocean, where a small settlement had been established only six weeks after Sydney, in March 1788.

Norfolk Island is a volcanic Island surrounded by steeps cliffs and covered with the distinctive form of the Norfolk Island pine. Landing was (and remains) difficult, the shore accessible at only a few bays, and heavily dependent upon the weather. Gale-force winds and turbulent surf meant the convicts were put ashore from the two ships over several days. On 19 March Supply offloaded its stores, and then it was Sirius’s turn. A strong on-shore wind, which unexpectedly changed direction, drove the ship onto the shallow reef that guards Sydney Bay, in front of the small settlement.

This dramatic watercolour, The melancholy loss of H.M.S. Sirius, painted by midshipman George Raper, appears to show the moment of impact, the force of the collision demonstrated by the fluttering standard and the falling masts. In fact the masts were cut away following the first crash in an effort to minimise damage. Sailors on board would have been working frantically to save the ship, yet Raper shows no signs of this turmoil in his uninhabited scene. Another watercolour by Raper, held in the Natural History Museum, London, shows later rescue efforts, with goods afloat and people working desperately to haul sailors and stores to shore. All crew were brought safely ashore, through the surf and across the reef, by the following afternoon. Lieutenant William Bradley wrote in his journal ‘Although we had all escaped from shipwreck with our lives, yet our situation with respect to provisions was alarming and very precarious, it being doubtful whether any could be saved or not’. Lieutenant Ralph Clark was more emotional: ‘Gracious God what will become of us all, the whole of our provisions in the ship, now a wreck before us. I hope in God that we will be able to save some if not all but why do I flatter myself with such hopes – there is at present no prospect of it except that of starving’. 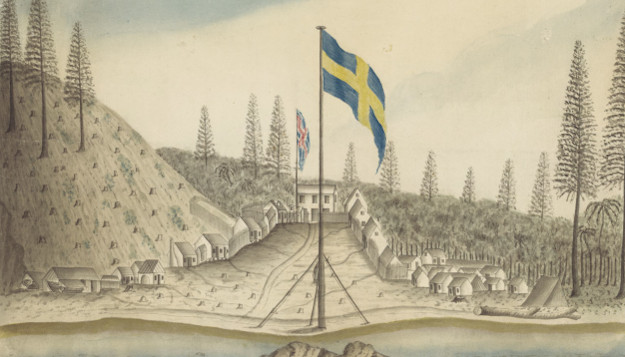 Several days later Supply sailed for Port Jackson to tell Governor Phillip of the disaster, leaving behind seventy-seven of Sirius’s crew who were marooned for eleven months, surviving with the convicts and marines by farming, fishing and eating sea birds arriving for their seasonal nesting.  Slaughtered in their thousands, these birds were named Providence petrels for their timely arrival, but they were soon driven to extinction on Norfolk Island, although some have returned to breed on nearby Phillip Island. Goods and materials were salvaged from the wreck over subsequent months and years. In 1905 an anchor visible at low tide was blasted from the coral and installed in Macquarie Place in Sydney. Other items raised by local divers and marine archaeologists in recent decades, including another anchor and cannons, are now displayed in the Norfolk Island HMS SiriusMuseum.  In addition to the depiction of the disastrous wreck, the National Library owns a map by Raper in which he has carefully marked the route of the Sirius on that fateful day, and a view of the settlement (also called Sydney), which is dominated by the large yellow and blue flag used to signal that it was safe to land. 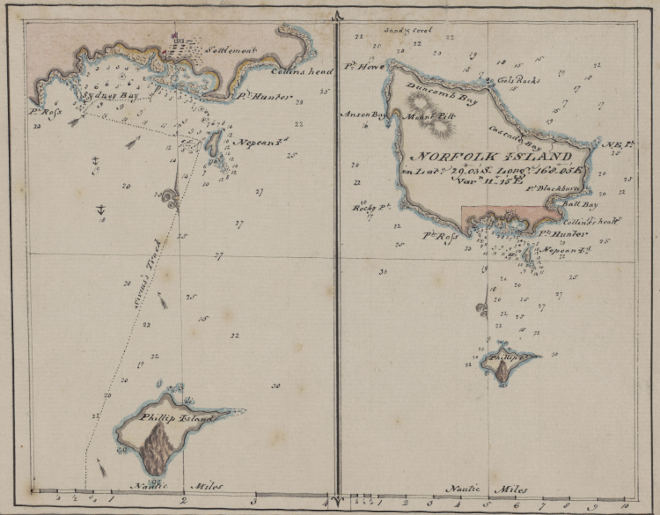 2020 National Library of Australia Fellow, Alisa Bunbury, is the Grimwade Collection Curator at the Ian Potter Museum of Art, University of Melbourne and an independent curator and researcher.  She is currently researching nineteenth-century images of Norfolk Island as part of her 2020 National Library of Australia Fellowship, supported by the Patrons and Supporters of the Library’s Treasures Gallery Access Program for Curatorial Research.

Find out more about the National Library of Australia Fellowships program. Applications for 2021 Fellowships are now open.