In preparation for this shiny new blog we spent a fair bit of time hunting through the Trove pictures zone looking for an image we could use to represent what it is we actually do. What is Trove? You can see one of the photos we found below. This, I suspect, is how many of our users see us – purveyors of Australian newspapers to the world. And fair enough. The Trove newspapers zone currently contains more than 120 million articles and receives about 70% of our web traffic. But Trove is much more. News stand in a railway station showing billboards publicising the opening of Parliament House in Canberra and an advertisement for Lustre Silktex stockings, Melbourne, 1927. http://nla.gov.au/nla.obj-141706300

From books and pictures to maps and music, Trove helps you explore new contexts and connections. From artworks and diaries to datasets and research papers, Trove opens a window onto Australian thought and culture. From stuffed dogs and voodoo dolls to tales of joy and tragedy, Trove introduces you to stories from around the country. Like this blog post, Trove is a starting point.

So let’s start with the photo of the newspaper seller and see where we end up. The picture is from the National Library of Australia’s collection and shows a news stand in a railway station in 1927. It’s displaying all sorts of advertising, including, if you look closely, an ad for Lustre Silktex stockings. If you search Trove for these stockings you discover that they were part of a display in Cribb & Foote’s department store window.

From the record for this photo we learn that Cribb & Foote was created by the partnership of John Clarke Foote and Benjamin Cribb in 1854. Search Trove for Cribb & Foote and a small slice of Queensland history begins to open up before you.

We can trace the types of goods sold by Cribb and Foote through  advertising in the newspapers zone. 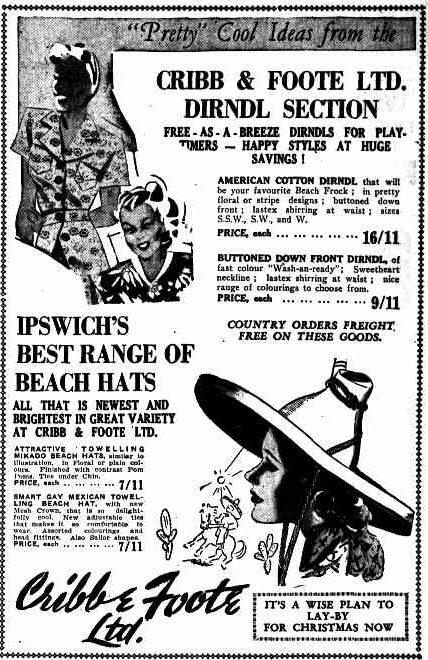 Thanks to the Ipswich Library &​ Information Service, whose collection is included in Trove, we can see more examples of their advertising in the pictures zone: advertising fans were apparently popular.

We can even try out their cheese cake recipe.

In Trove’s books zone I found the Memorandum and articles of association for Cribb & Foote held by the State Library of Queensland. There’s also the book Pins, petticoats and ploughs: Cribb & Foote, universal providers to Ipswich and District from 1849 to 1977. This work is in the National Library’s collection, and being lucky enough to work here I had a look. It was written by Keith Jarrott, who was a director of the store from 1957 to 1972. He’s done some wonderfully detailed research into the history of the company using personal archives, the partnership minutes, records from the Australian Stock Exchange and historic newspapers. The newspapers he accessed on microfilm in the State Library of Queensland. I dare say he’d have loved Trove!

In the journals zone I found company reports and research into the history of Ipswich.

The diaries zone tells us where some of the store’s archives are held, including the delightfully titled Cribb and Foote family tree compiled by Mrs Nancy M.F.S. Foote, Mrs Marjorie E. Glasgow, and Mr Clifton Foote Cribb.

People are at the heart of a good story and Trove helps us find out about some of the people associated with Cribb & Foote. There’s a biography of Benjamin Cribb, one of the founders of the store, in Trove’s people and organisations zone. His portrait is in the pictures zone along with portraits of the other founder, John Clarke Foote.

Digging a bit deeper, I came across information about ordinary staff members like George Perkins who worked for Cribb & Foote for 59 years, retiring with the record of having been one of the best packers in the state. In Pins, petticoats and ploughs George’s work is mentioned:

‘Careful packing of…orders – pianos, groceries, jugs – was executed by George Perkins…An old workmate recollected that George packed a quarter ton order for Yeulba in cases. The only damage in the long journey was a chipped basin. The station manager, after unpacking the consignment, offered his own staff £5 if anyone could put the goods back in the cases but no one took up the challenge. The station manager, on his next visit to Cribb & Foote, thanked the packer personally.'(p.47) 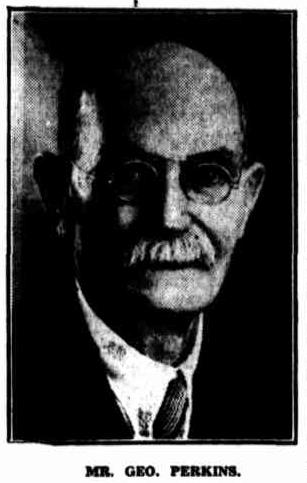 The pictures zone provides other glimpses of staff activities and community life. There are photos of the staff choir and the Cribb & Foote centenary bicycle race. They even had football and cricket teams. Raising money for charity was obviously part of the life of the store, as I also found pictures of a variety of fundraising events. A company which fosters life long careers becomes more than just an economic unit, it becomes a family unit. In Pins, petticoats and ploughs a long time employee is quoted, ‘Cribb & Foote was more than just a store…Ipswich can be proud that it owned this remarkable, unique establishment’. (p.111)

As I was reading about the life of Cribb & Foote I started to think about the things we learn when we trace the life of a company like this one that spans decades including the formation of Australia as a nation. We can learn about the economic development of our country through the goods sold and the prices of those goods, but of more interest to me is the development of Australia as a community. I created this Trove list with the pictures of all the sporting teams Cribb & Foote have had over the decades. How many other organisations use sport to create a community, as opposed to simply a workplace? How important are such things in the success of a company? How important are they in our sense of identity as Australian?

I was also interested in the changing mores of fashion, aesthetics and commerce which we can see in Cribb and Foote’s advertising. I created another list of all the pictures of Cribb & Foote window displays and some of the other forms of advertising they used.

In Trove you start with one information rabbit and, as rabbits do, it multiplies and you find yourself following information down all sorts of burrows. There are so many stories about Australia yet to be told. Trove’s job is to help you find their beginnings, their middles and maybe their ends.

In this blog the Trove Support Team, with the help of invited guests, are going to tell you more about how Trove works, who works on Trove, and what’s in Trove. We’ll share our discoveries with you (just wait until you find out what animals can do with guns!), and we’ll help you get the most out of your own research. This is a new starting point, let’s see where we end up.