Like a parched man coming across a lush oasis

At Trove headquarters we hear time and again how access to the digitised newspapers has revolutionised research. There is no area in which this is truer than family history. Whereupon once family historians were chained to microfilm readers in their local libraries, Trove’s digitised newspapers open up the whole country: all you need is an internet connection. But technology has not only changed the ways in which stories can be found, it’s also made sharing those stories so much easier. Our family historians have created their own websites and mailing lists. They’ve created communities across state boundaries. Here are some of their discoveries. 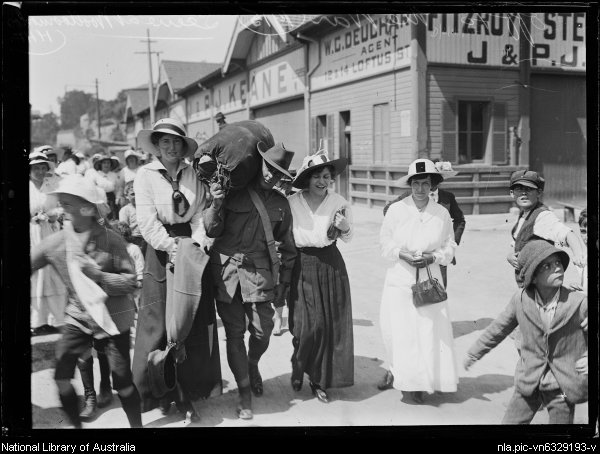 New recruit off to the Great War carrying his pack as he walks with his family in Woolloomooloo, Sydney, 1915 [picture] / Herbert H. Fishwick http://trove.nla.gov.au/work/189730731.

‘Some while ago I found some most interesting articles from the Great War about my grandfather and his three brothers who all served in WW1.

One brother (Arthur Guy Edwards) was among the first wave on the 25th April 1915 to land at Gallipoli and he survived the entire campaign. He continued to France and died there on 17 May 1917 at Bullecourt.

Another brother (Owen William Edwards) also served in Gallipoli and survived his shorter time there on the Gallipoli peninsula. He redeployed to Palestine and was part of the charge of the lighthorse at Beersheba where he suffered a gunshot wound on 31 October 1917 which resulted in his arm being amputated in Cairo a week later. He was invalided back to Australia and lived until 1971.

The youngest brother (John Max Edwards) enlisted at the first opportunity aged 19, and arrived in Marseilles on 08 June 1916. He was dead two months later on 08 August 1916 having been "blown to pieces" at Pozieres.

Finally my grandfather (Frederick Richard Charles Edwards) enlisted under the name of Thomas Edwards to avoid some ‘trouble’ with the local constabulary in western Queensland and saw action in France but still managed to survive the war. He lived until 1961.

The thing was that no one in my family had EVER seen my grandfather, he had his own issues and after fathering a swag of kids simply went off radar, never to be seen by the family again. Even my own father (his youngest son) had never known him, and had never even seen a picture of him.

Through perseverance, patience, and possibly some encouragement from forces unseen, I chanced across an article about the four boys, and (seemingly) hidden away on a different page of the same edition of the Queenslander newspaper of 23 June 1917, some months after finding the original article, there looking up at me from my iPad was my grandfather, but not only him, there too were his three brothers staring up at me from that same Trove digital page.

This moment will stay with me forever, and to the team that made Trove a reality, I will be forever indebted to you, it is a wonderful gift you have given our country.  I only wish my mother and more especially my father had still been alive to lay eyes on these ghosts from almost a century ago.’

‘I have had the most enjoyable time trawling your records and have been able to draw a most detailed record of our family's first Australians who arrived in about 1853.

It has enabled me to paint a picture of these characters in quite deep detail, from the funny to the sad, and has given us a window into the social history of the times.

I have been able to create a space via WordPress (also free) so that what now must be hundreds of descendants can both read and contribute to the story.

Links have been made between relatives in many states of Australia. They had previously not known of each other’s existence. Stories have been shared, photos have been turned into a virtual museum for all to share, and some of us have even been able to meet up. All the way from Perth, to parts of Victoria and NSW. Friendships have been made, family bonds renewed, and a whole lot of fun has been had in the sharing of it all.’

‘For 9 years I'd been trying to locate the death record for my ancestor Margaret Beattie (nee Long). I had ordered a certificate from the NSW Births Deaths and Marriages for Margaret Beatty who died at the Lunatic Receiving House on 5th July 1876 but there was not enough detail to establish if she was my ancestor and I'd had no success searching other records.

A few years ago I found a newspaper article on Trove
The Maitland Mercury and Hunter River General Advertiser 29th June 1876
with the intriguing report of James Beattie from Boggy Flat (at Singleton, NSW) where my Beattie ancestors lived,  being taken to the receiving house at Darlinghurst after being brought to the lockup by friends due to being of 'unsound mind'.

As this date was so close to the 5th July 1876 on the above mentioned certificate and this was very likely James, brother of my ancestor William, who were both sons of David and Margaret, I wondered if this could possibly be the clue I'd been searching for.

A few months later a distant cousin (a descendant of James) and expert researcher was able to visit the Archives and view the Admission Records for Darlinghurst, and the mystery was finally solved. Both James and Margaret were admitted to the Darlinghurst Receiving House on 1st July 1876 and both suffering from the same condition "monomania" or "religious monomania" which also matched the cause of death on the certificate I had. It seems fairly certain James was the son of Margaret and James (although he married 4 years later and the admission register said he was already married).

This is only one of many mysteries solved thanks to Trove and although there was a lot of sadness in learning this was in fact my Margaret, it was a good feeling to be able to know when and where she died and that the certificate I'd ordered was hers. Without Trove I would probably still be searching for these details.’ 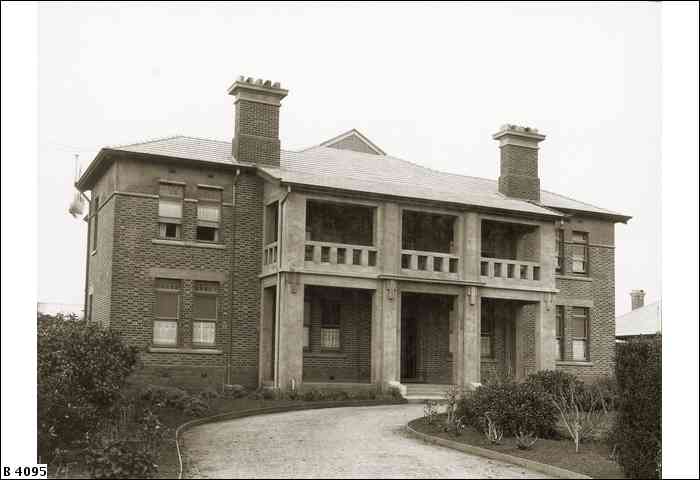 ‘My involvement with family history research began 30 years ago in 1984, back in the days of microfilms and microfiche and the like. This was the period when we had to strain our eyes running scratchy microfilms of old newspapers through overhead projectors hoping against hope that some relevant item might somehow 'jump-off-the-page' at us and prove to be useful, then having to order a patchy photocopy to be laboriously transcribed into our own research.

To say that the advent of Trove was like a parched man in the desert suddenly coming across a lush oasis is a gross understatement. All at once a host of public libraries came to your door bringing with them an unbelievable amount of research material complete with a powerful search engine and the ability to edit and download vast amounts of data with the greatest of ease.

My personal 'Eureka' moment came when Trove unearthed something that I would NEVER has discovered otherwise, a three line public notice inserted by the sister of my great grandfather on page one of the SMH of 25th June 1864, attempting to contact her brother:

Hitherto I had been unable to locate any information whatsoever about Catherine following her arrival in 1850 on the Tippoo Saib, the last of the Earl Grey ships.’

‘My most memorable encounter with Trove was to see my grandfather’s (1930) and grandmother’s (1937) funeral notices in the Sydney Morning Herald. At 80 years of age was able to make corrections and fill in the missing gaps which I hope will be of use to future generations.’

Warren shared the story of his grandfather Eugene, the stationmaster at Killara in the early 20th century.

‘Several unusual incidents occurred during Eugene’s reign. In May 1904 a passenger on the 5:52pm stepped out of the train on the wrong side. Perhaps a tough day at the office and liquid refreshments had taken their toll?  In any event a lookout was kept on the next train to Milson's Point, and a man was discovered lying by the line. He was treated at North Sydney Hospital for injuries to one of his shoulders.

Much later, in March 1909, about 50 caddies congregated at the station as members of the prestigious Killara Golf Club arrived on their way to the links.   The caddies were on strike! They’d gathered to tell the members that they would have to carry their own clubs unless the caddies’ allowance was raised 50% from a shilling to eighteen pence per round.  One can only imagine the mayhem that would result were one of today’s unions to ask for a 50% increase in pay!’

Thank you to everyone who shared their story with Trove. There hasn’t been room in one small blog post to do justice to them all.