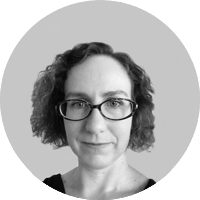 Most Australian historians will tell you that there was a ‘before Trove’ and an ‘after Trove’. Being able to search and access digitised copies of hundreds of Australian newspapers, from major city dailies to small country papers, has changed the way we work and the sorts of histories we are able to write.

Nowhere is this more apparent than among those of us researching the history of one of Australia’s oldest migrant communities — the Chinese. Over the past 20 years historians have sought to uncover Chinese voices within the historical record, to allow us to consider the lives of Chinese Australians on their own terms and to better understand their place within the Australian community.

Newspapers are one source that provides an astounding array of information about the individual and collective lives of Chinese people in Australia. The mainstream English-language newspapers, particularly local rural papers, that are available through Trove have facilitated new lines of historical inquiry and provided fresh insights into many aspects of the day-to-day lives of the early Chinese residents of Australia.

An example is my work on Chinese-Australian families, where with Trove’s help I have been able to identify and track the lives of some of the earliest Chinese women in New South Wales. Arriving in the gold rush decades of the 1860s and 1870s, these women appear in few historical records. But because the women were a source of curiosity to European colonists, local newspapers featured articles about them, noting their arrival, marriage, settlement, the births of their children, their deaths. While it’s still a work in progress, Trove’s digitised newspapers have allowed me to pursue a research topic I had once abandoned as being too hard.

Historian Mei-fen Kuo has argued that these Chinese-language newspapers ‘have an important role to play in understanding Chinese-Australian history—mundanely through the historical archives they supply, and more profoundly through the windows they offer on community formation and everyday historical awareness’ (Kuo 2013, p. 5).

The editorials, news articles (both local and international), shipping timetables and advertisements they published reflected the interests and concerns of Chinese living in Australia. They provide insights into the ways Chinese in Australia saw themselves and the broader society around them. The language used within the papers is also a reflection of the Cantonese origins of the community and is interesting in and of itself. 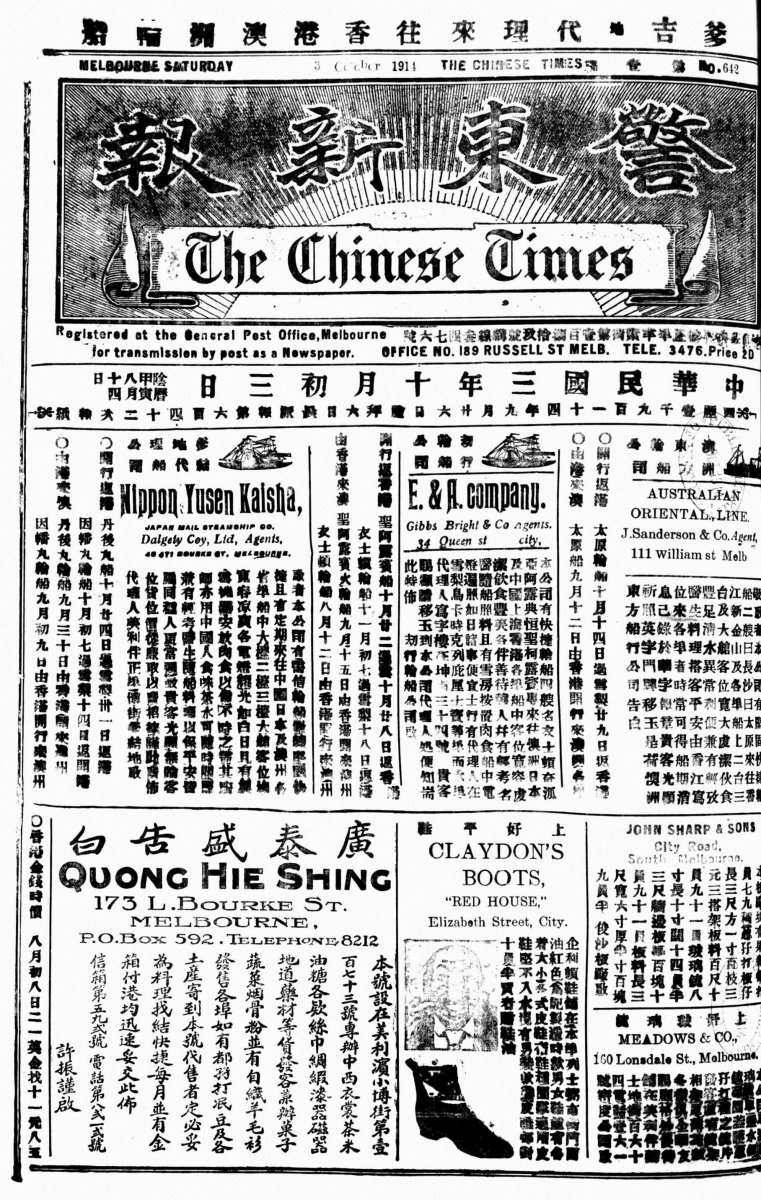 The Chinese-language newspapers carried advertisements for a range of Chinese and European businesses, such as those on the front page of the Chinese Times on 3 October 1914. Note the prominent ads for shipping lines. http://nla.gov.au/nla.news-page15349329

But while they are incredibly valuable as a historical source, these newspapers haven’t been widely used in researching Chinese-Australian history. The main stumbling block for most Australian researchers has been the fact that they’re written in Chinese. Even those of us with some Chinese have balked at the thought of trawling through microfilm copies for more than the occasional article — it’s a hard and often thankless task in your native language, let alone in a form of written Chinese that is quite different from the contemporary Mandarin taught today.

It’s exciting to think of the ‘after Trove’ possibilities that access to these newspapers holds, both for historians in Australia and those overseas, particularly in China. Researchers on overseas Chinese history in the People's Republic of China tend to look towards Canada and the United States — two major destinations for Chinese migrants in the 19th and early 20th centuries — yet perhaps easier access to these Australian sources will prompt them to turn their gaze to the south.

Read on for a short introduction to each of the newly digitised newspapers.

The Chinese Advertiser was the earliest bilingual Chinese-English newspaper in Australia, first appearing in May 1856. It was published by Robert Bell, an Englishman, in Ballarat every Saturday, had a circulation of 400 copies and was distributed for free. The name of the newspaper changed later in 1856 to the English and Chinese Advertiser, after which time more of the paper’s content was in English. The Chinese name of the newspaper varied in the earliest editions, but the Chinese title 英唐招帖 (Yingtangzhaotie) appeared consistently under the English masthead from late 1857. The latest remaining copy of the newspaper is dated 7 August 1858. 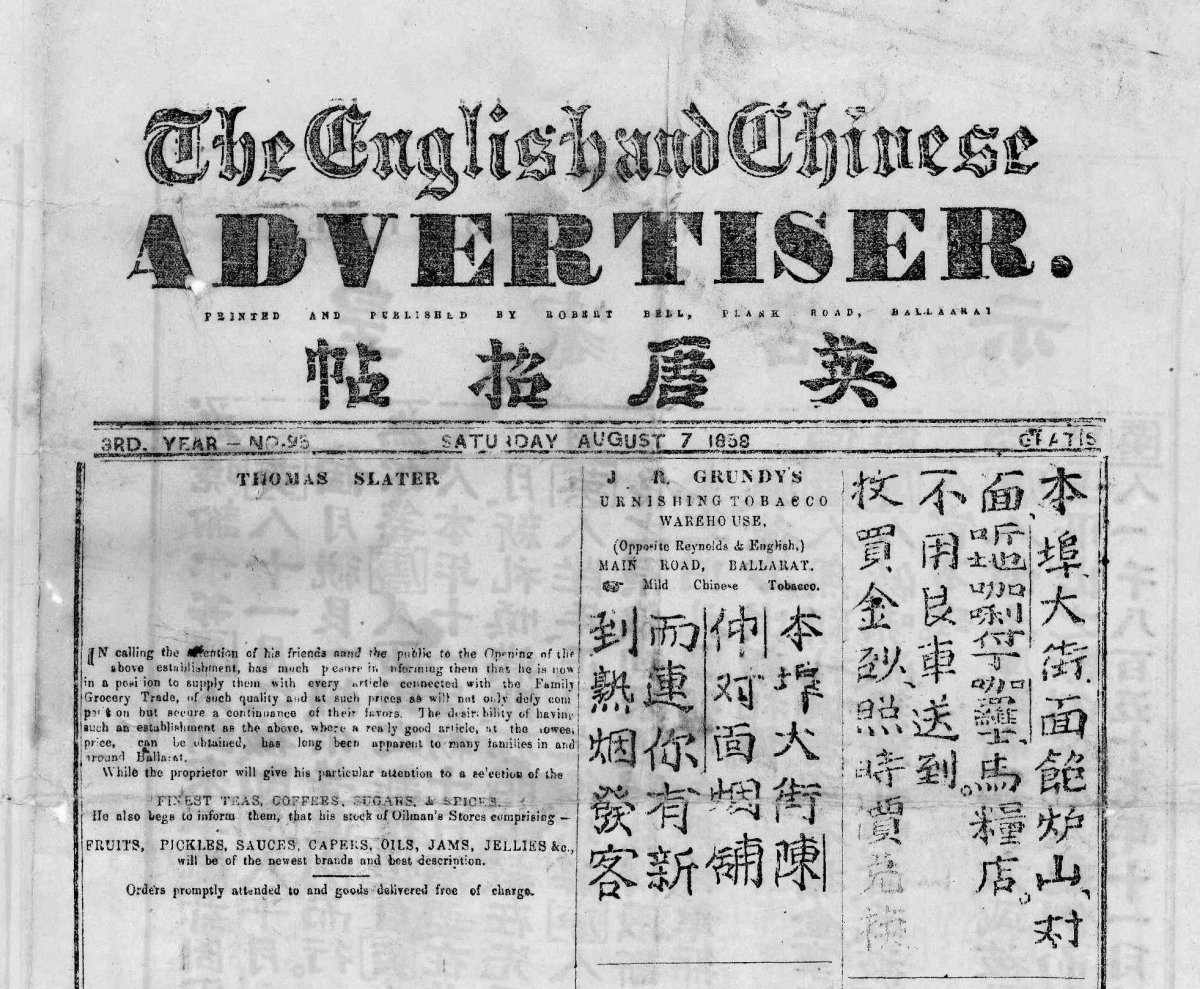 Front page of the last known copy of the English and Chinese Advertiser, 7 August 1858. The page features advertisements for five Ballarat businesses. http://nla.gov.au/nla.news-page15910530

Only ten issues of the newspaper are known to still exist, all of which have been digitised and made available in Trove. The newspaper published government notifications, advertisements and Biblical passages, rather than news articles or editorials. 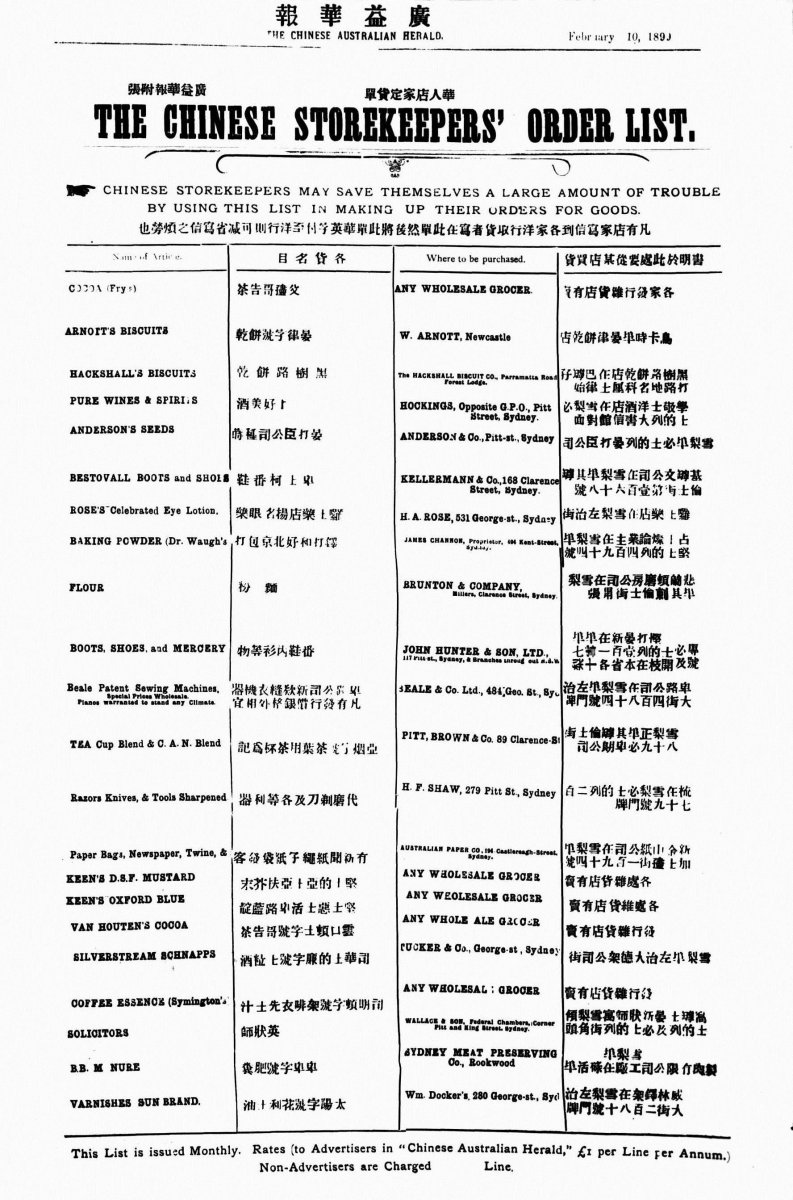 The full run of nearly 1500 issues of the Chinese Australian Herald are digitised and available through Trove. The newspaper published editorials, Australian and overseas news, and advertisements, many of which were for European-run businesses in Sydney. Drawings and photographs were used to illustrate both news stories and advertisements.

The Chinese Times was Melbourne’s first major Chinese newspaper, published for the first time on 5 February 1902. For the first three years Thomas Chang Luke (鄭祿 Zheng Lu) was the proprietor and editor until he ran into financial difficulties. The Chinese Times changed its Chinese name several times over the years, reflecting shifts in its ownership and political sympathies: 愛國報 Aiguobao (1902-1905), 警東新報 Jingdongxinbao (1905-1914), 平報 Pingbao (1917), 民報 Minbao (1919-1922). It was published weekly, at first on Wednesdays and then from February 1905 on Saturdays. From 1919 the newspaper was the official organ of the Chinese Nationalist Party in Australia. It was published in Sydney from 1922 until it ceased publication in 1949.

Nearly 800 issues of the Chinese Times have been digitised and made available through Trove. These date from 1902 to 1922 with some gaps as there were breaks in the newspaper’s publication. Only scattered issues after 1922 are known to exist, held in both public and private collections.

The Tung Wah News began in Sydney in 1898 as a joint-stock company funded by local Chinese merchants. One of the largest shareholders was Thomas Yee Hing (劉汝興 Liu Ruxing) and many of the smaller shareholders were market gardeners. The newspaper was published twice weekly, on Wednesdays and Saturdays, and the first issue appeared on 29 June 1898. The Tung Wah News became the Tung Wah Times in August 1902, after which it was published once a week.

The Tung Wah newspapers have not yet been digitised and made available through Trove. There is, however, an English-language index to the newspapers which was prepared as part of the Chinese Heritage of Australian Federation project. This index allows you to search for terms in English and provides the issue, page and column numbers for individual articles. Copies of the Tung Wah newspapers are available on microfilm in the State Library of New South Wales and the National Library of Australia.

Macgregor, Paul, 2011, ‘“Before we came to this country, we heard that English laws were good and kind to everybody”: Chinese immigrants’ views of colonial Australia’, in Alison Broinowski (ed.), Double Vision: Asian Accounts of Australia, ANU Press, Canberra