Never give up
Celebrating Family History Month with your Trove discoveries

To celebrate family history month we once again asked you to share your stories with us. We asked you to tell us what you’ve found, how you’ve found it and where your research journey went next. One of the aspects of this year’s stories that I’ve found inspiring and moving is that there was a journey out of Trove and into the world: new connections were formed with people, past and identity. And not all the stories come out of the newspapers—Trove is really not just newspapers! 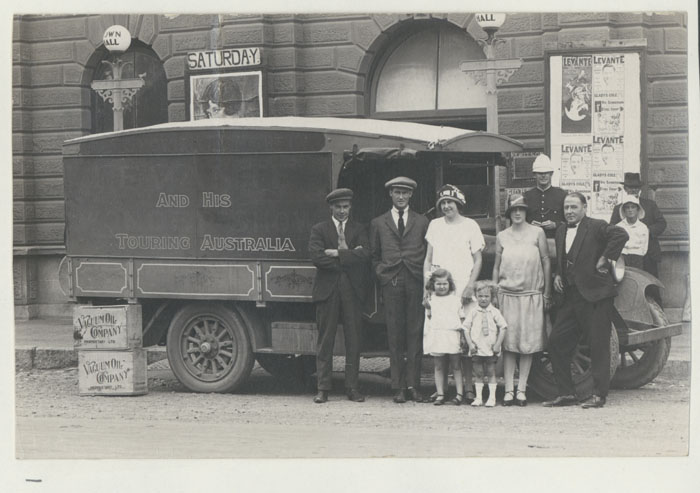 I hope the extracts of these stories give you a flavour of the delight our Trove users have found in their discoveries.

Trove led me to make contact with a relative in Scotland.

I spotted in the monthly Trove newsletter, mention of the digitisation of the index from Beaconsfield Museum. Many ancestors from my tree resided in Beaconsfield Tasmania during the 1880–1920s, so I decided to have a look. There listed, was a ‘Jessie Gibson’ collection of letters and postcards. Upon further investigation, I discovered that she was a distant cousin.  The digitised index, didn't just list the letters; it also provided a brief summary of the content.

There was an intriguing letter written in 1940 that simply said ‘Jessie Gibson - letter from Banff Scotland’. This piqued my interest. My ancestor, Nora Gibson, was from Beaconsfield originally but she moved to Banff Scotland. So I took a chance and contacted Beaconsfield Museum, telling them about the digitised index I saw in Trove.

They were very kind and sent through a scan of the letter. It was simply a beautiful moving letter that Nora had written to her second cousin. She detailed her life, her experiences and lots of family related news.

Due to this letter I was able to find the other relatives in Banff who do remember Auntie Nora, and have passed this letter back to them. It has gone full circle. Sent to Tasmania from Scotland, and now back again.

Trove has, for me, been able to solve family puzzles and assist me in locating family treasures and family members.

My tip—don’t give up. If you don’t find anything today, then try again in a week or month′s time. Files are constantly being digitised, so return to Trove and try searching again and again. And don't forgot to keep an eye on the ‘What's new’ section.

I heartily support this suggestion. There are several ways you can keep up to date with the news in Trove—Catriona.

When you watch TV or hear others talk about family history and they say things like ‘my great Aunt was a painter ... that is where I must get my artistic side from’ I have always been disappointed, as all my ancestors seem to be farmers. All of them. When they arrived in Tasmania they stayed in the Launceston area or the Midlands. As farmers.

It is so not me and I could never understand the connection. Then I found this story and I realised it was the type of people they were that is my family inheritance: who they were (and what they did for the community), not what they did for a living.

And can I just say that the fact he was called ‘Ducky’ just brings a smile to my face.

This little bit of information (from Trove) lead me to the (Tasmanian) Midlands Council Facebook page and a contact who remembered the name and thought there may have been some photos of my great great grandfather. They now have pride of place in my father's study.

And, oh my goodness, is this man the spitting image of my sister, dad and nan!

Without Trove I would have just seen him as a ‘farmer’ and a few bits of information and nothing more.

He is Ducky. It is also my family.

I thought I'd have a quick look at Trove when I began my family history research and found such a vast amount of information that I'm now an avid user of this wonderful resource. I was able to trace information of my ancestor’s arrival to Australia in 1850 and follow their journey from Adelaide, across to the gold fields in Bendigo. One of the stories that I was delighted to discover was how my great great grandfather (who was a vet) had found something shiny embedded in between the back teeth of one of his equine patients. It turned out that the horse in question had picked up a sizable lump of gold in its feeding and munched it firmly into place, much to the delight of its owner!

Rosemary shared the story of her Great Aunt Lily—Catriona.

I am a family historian, who unfortunately has had to struggle finding every piece of our family history. Luckily for me Trove has been a godsend.

Lily’s story is a direct result of articles gained from Trove. Lily’s divorce is well documented in both the Victorian and WA newspapers.

It is also worth noting that the information relating to the death of Lily’s brother Norman, has also been gained from Trove.

I’ve always thought that a movie with Angelina Jolie as Lily would be pretty good (it’s ok, that is a joke).

I began using Trove a few years ago and revisit it occasionally to check on some of my more unusual name. Recently, my cousin’s wife asked me to help her find the answer to a family history question involving her grandmother’s maiden name of Ardouin. She pronounced this name as ‘Ardoon’, while I believed it to be of French origin and would have been pronounced ‘Ardouwin’.

I only knew the basics of the immediate family, so I had to check all the entries to see if they concerned any of ‘our’ family members. Luckily for me, our Ardouin family advertised their businesses, publicised life’s events and managed a few notable sporting achievements and petty crimes. In particular, this funeral notice for Charles was a mine of information on his mother, brothers and sisters, and was particularly helpful for tracking down marriages and confirming electoral roll locations of others.

There was one particular Trove entry that I initially glossed over, until I discovered the maiden name of Evans a few generations back. Then it made sense. 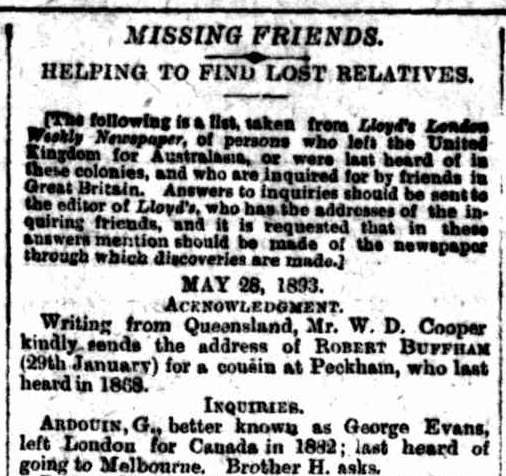 How intriguing! I then found other index/database entries about a George Ardouin marrying in 1893 and having at least four daughters from 1884–1894, before disappearing again. Eventually, in 1910, George’s wife Elizabeth Emma (née Merryweather) remarries an Andrew Thollefson. What happened to George? A newspaper article confirmed some of these connections: 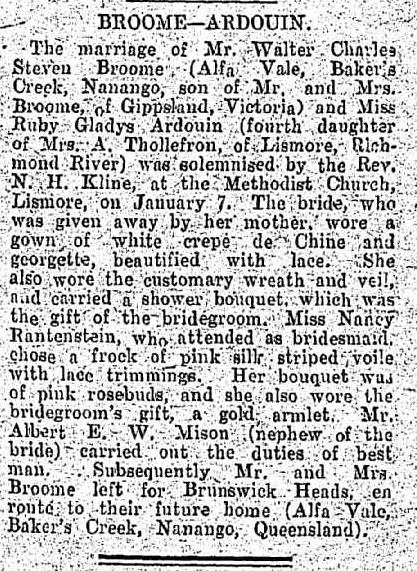 Various researchers have suggested that George may have led a double life. They record him having married in 1877 in England to Jane (née Barratt). The couple are recorded as having children from 1877 to perhaps 1887. The same researchers list George as dying in Romford, Essex in 1904. They also suggest that George married Emma Elizabeth Merryweather in Australia in 1893 and had children here from that date. It seems we may have a bigamist. I have yet to prove this theory via certificates, but it is certainly intriguing, to say the least. None of this would have been possible without online access to historic Australian newspapers. I thank you Trove!

These are just the highlights of the stories so generously shared with Trove. To close, I’ll just repeat Jill’s advice: don’t give up! You never know what new collections and digitised items will turn up in Trove.

If these stories have whetted your appetite, why not read (or re-read) last year's Family History Month posts, Like a parched man coming across a lush oasis, and Trove tips for family historians?