Trove’s people and organisations zone passed a milestone in May 2015. The zone now contains biographies describing the lives of over one million people. One million people who have contributed to the creation of Australia in both small and large ways. We’ve written about our work on this zone before. In 2014 I introduced you to the sort of work we do for people records, using the story of an Australian doctor and writer. Earlier in 2015 Trove team member, Julia, told you about the work we’ve done to improve the discovery of Australian researchers. There have been two other major pieces of work recently which have enriched this zone even more.

Our one millionth man is Alec Bumbolili Kruger. His record comes from the Aboriginal and Torres Strait Islander Biographical Index (ABI), an index of published material held in the AIATSIS Library. Alec is an Aboriginal ex-serviceman from Central Australia who had a varied career which includes: time spent droving, working on a pearl boat and training disadvantaged youth. His autobiography, Alone on the soaks, is held in numerous Australian libraries. 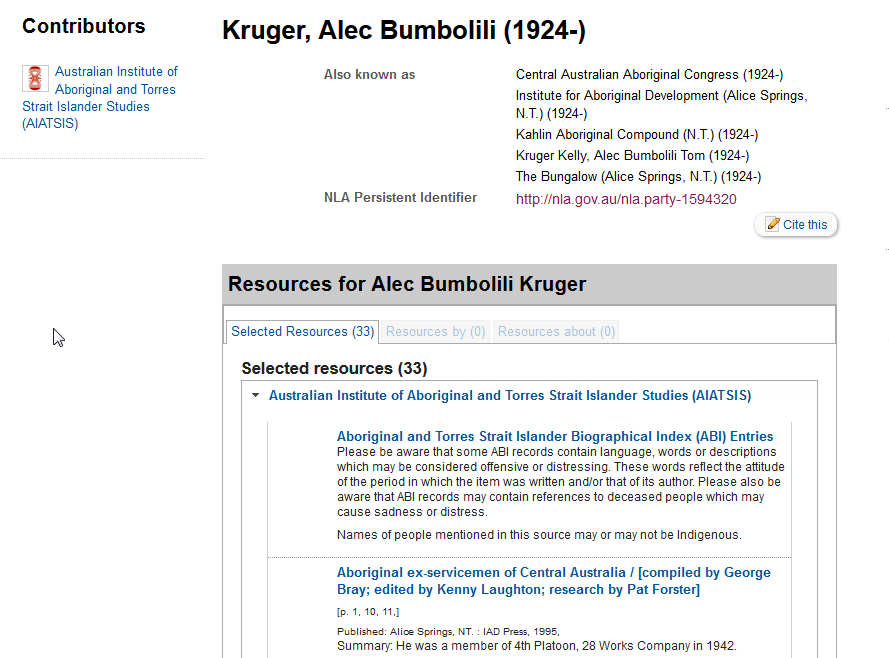 In his record, as in all records in the people and organisations zone, you’ll see his name at the top, the organisation which created the record on the left, and resources related to him at the bottom of the screen. The ‘Selected resources’ tab is the jewel in the zone’s crown, this is a curated list of resources either written by the person or written about their life. These entries often give a short summary of what an item has to say about Alec’s life,  for example, ‘He was a serviceman photographed with other Aboriginal soldiers in training, 1942’.  Records are grouped by the organisation which contributes the record to Trove including over fourteen thousand people from the ABI so far. Highlights of Trove’s people zone include Evonne Goolagong Cawley’s and Nova Peris’s records these include rich biographies written by organisations such as the Australian Women’s Register, Libraries Australia, and the Australian Parliamentary Library. As you can see, the people and organisations zone is a great place to start your research into the people who shape our country.

If you’re interested in Australian theatre then our other major new collection is for you. AusStage is a database which contains information from Australian universities and leading performing arts organisations. If it’s been onstage in Australia it’s in this database. For the last two years Trove has been harvesting the event records into the journals zone And we’re now getting their people and organisations as well, with over 35 thousand records now in Trove. You caninvestigate records like Deborah Mailman’s with Trove collecting information from AusStage, the ABI and Libraries Australia.

Another feature of this zone is the ability it has to link people together in a section called ‘Related people and organisations’.

Here you can see the people Deborah Mailman has worked with and if you’re interested, visit their record in Trove by clicking on the link.

We’re also really happy to share with you a new way to discover people and organisations. If the organisation which shares its records with Trove includes occupation information, you can now search it. Explore Australia’s actors, artists, choreographers, botanists using the facets under ‘Refine your search’.

Both of these collections will continue to grow over time, each providing new people to discover and new stories to tell. They’re only 2 of the 45 organisations who create these terrific biographies and curated lists of resources and share them with Trove and we expect many more to come.