The team at Hidden Melbourne has been doing extensive research into the history of Melbourne and is developing ways to make the rich trove of old images and stories easily accessible and digestible for students, as well as providing a gateway for those wishing to study Melbourne in more detail.

J H Kerr’s 1861 Panorama from the Melbourne Club is one of the earliest 360° photographic panoramas of Melbourne, from the roof of the Club, a building which still stands today, making its preservation and discovery a significant milestone.

This was the first question that we asked ourselves. Because of the difficulty of the wet plate collodion photographic process, mid-1800’s photographers not only had to carry a large wooden box camera and sturdy tripod, they also had to carry glass plates coated with collodion solution, as well as a number of chemicals to sensitise the plates before exposure and then “fix” the image immediately afterwards. This meant that panoramic images captured from an elevated position were at the top level of difficulty.

Inspection of thumbnail images from the National Library of Australia (NLA) proved that the images formed a 360° panorama, and although degraded by time, detail should be sufficiently recoverable. Using grant funding, we acquired the full resolution digital scans from NLA for use in our project.

This is what the most degraded images looked like 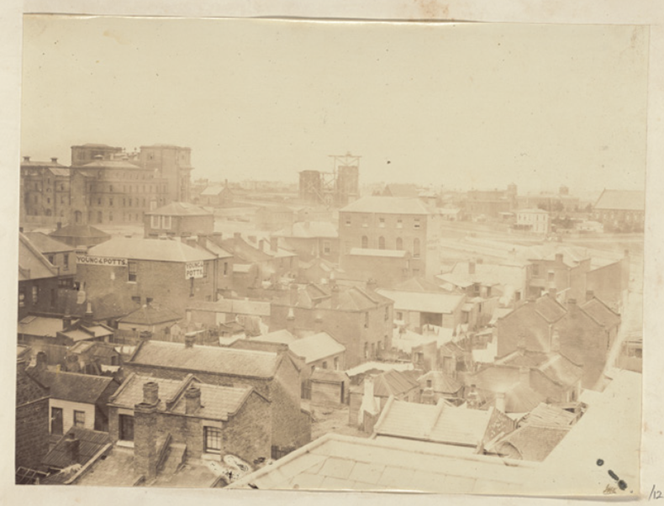 With very careful digital enhancement we were able to retain the character of the image and also reveal some exquisite detail. See the magnified sign on the Young & Potts building here. You can also clearly see the houses of Parliament, St Patricks Cathedral and other buildings and can zoom into more detail within the virtual tour. 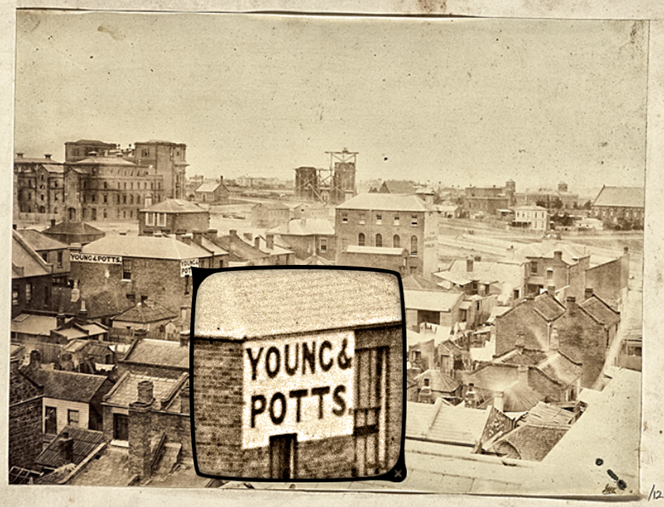 In the next step, the images were rotated and cropped to retain part of the frame and descriptive handwriting and a small paper margin between them like this.

Once the base image was deemed to be acceptable, we converted it into a format suitable for online viewing. The original format, at 100MB in file size when compressed, cannot be viewed online due to extremely slow loading. Therefore, the image has been converted to a number of smaller tiles, so that it can be quickly loaded and only the resolution required by the screen pixel density and screen size is delivered to the viewer. As the viewer zooms in to maximum detail, even smaller tiles are delivered. This provides a fast and seamless viewing experience and also prevents direct downloading of the full-size image, as that is not stored on the public server.

This image demonstrates a number of small tiles held on the server.

The tour is wrapped into a “skin” for the viewer. 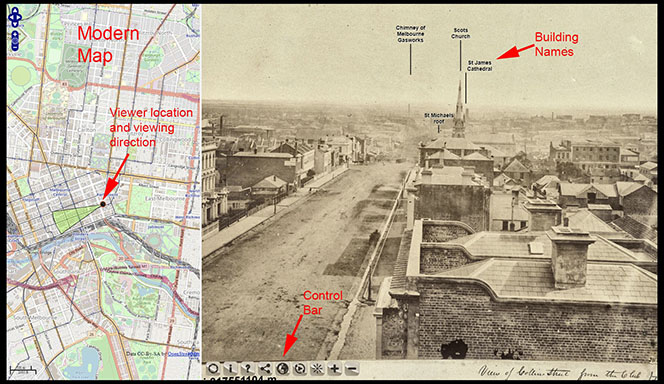 A modern map grounds the viewer in the present, familiar city and allows them to zoom in or out of the map, drag it to a larger/smaller size or close it completely. Interesting buildings have labels, which can be switched off. Close all control bar functions including the map to show a clean image.

Building names have been gathered from various sources:

The book held at the State Library of Victoria (SLV), Melbourne Club, A Social History  1838-1918 by Paul De Serville, gives an excellent description of the city over the ages. Buildings have also been identified from the many other old images of the city that we have used in our virtual tour through the ages.

The viewer can zoom in or out with the mouse wheel or control buttons. Other control bar functions are:

Non-Seamless stitching of the images

We have chosen not to “stitch” or “morph” joining images, in order to preserve the integrity of the photographer’s work. By presenting it in the “Cyclorama” format for viewing we also “go back in time”.

The viewer must accept the extreme difficulties of photography in those days.

The photographer moved around on the roof of the building, changing his viewpoint and therefore the perspective.

The lens may have tilted down for one frame and slightly up for another. We have to accept that and admire their fortitude. Notice the shift in the horizon here: 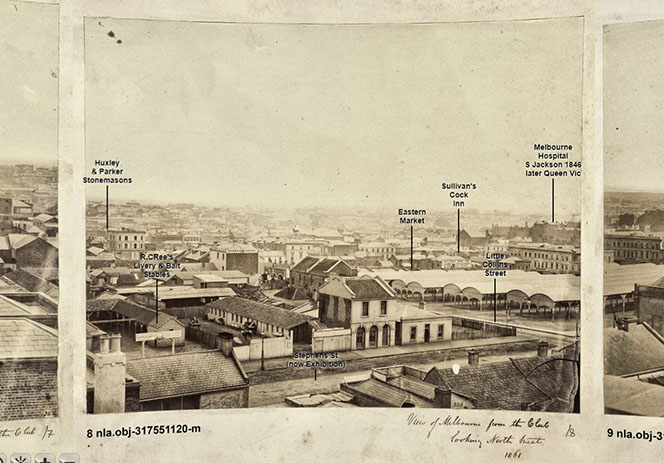 Other work we are doing

We have two other projects in development, and we welcome all feedback, information about old images, the historic stories behind them, and gaining access to historic towers and buildings.

Melbourne Time Travel is a project that allows viewers to go “walkabout” Melbourne through time and space.

Imagine standing on top of an old city tower, looking at another old tower, clicking on it and dropping in for a visit. Imagine if you were moving from the present to the past at the same time, or vice versa.

Or, imagine that you are standing on the spire of Scots Church in 1841, looking at the amazing 360° view of Melbourne shortly after its founding.

And then you come back again in 1875 and see the richest city in the world, a metropolis founded on gold, the second largest city in the British Empire after London.

And then we head to the future in the 21st century and see the modern city from the same location.

I give thanks to my colleague Mark Hassed for his support for this project, and a very special thank you to Dr Mimi Colligan, the “panorama lady”, for her enthusiasm, ongoing advice and incredible depth of knowledge about Melbourne panoramas.