In January 1935, travelling anywhere in Australia, you might have picked up a copy of Walkabout: Australia’s Geographical Magazine, drawn by its distinctive red cover, and flicked through its pages. This new publication was the first Australian national travel promotion, and it soon became a firm favourite. Walkabout was the kind of magazine people read in train station waiting rooms, at the doctor’s surgery, or when they visited a government office.

Walkabout sought to bring to city-based readers knowledge of the country beyond the suburbs. It wanted to promote Australia as an appealing place for potential immigrants and investors. But Walkabout was primarily a travel, natural history and geographic magazine, and it attracted the same kind of readers as the US National Geographic, with an Australian and Pacific focus.

Walkabout’s high quality images were captured by leading photographers, such as Frank Hurley and Max Dupain, and later Rennie Ellis. Its informative and entertaining articles were produced by highly influential journalists and commentators. Travel writers such as Ernestine Hill and Frank Clune vividly described remote Australia and the Pacific. Innovative and sensitive anthropologists including Donald Thomson and Ursula McConnel wrote accessible accounts of their work with Aboriginal and Torres Strait Islander communities. Specialists such as the entomologist Tarlton Rayment pitched intriguing articles like “The Virgins of Halictus” (about bees) and Vincent Serventy wrote “Termites have Talent”.

Over 80 years later, readers can now read Walkabout on their computers, their tablets, or their mobile phones thanks to the digitisation of the magazine by the National Library of Australia’s Trove. Those who remember the magazine fondly from their youth, and new viewers too, will find rich visual images and fascinating narratives. What kinds of things can we learn about mid-century Australia through the newly available Walkabout? 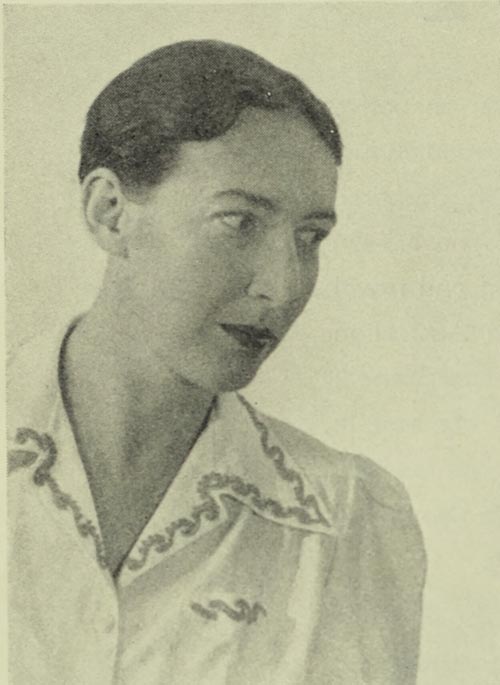 We know that the twentieth century saw massive changes in women’s lives, roles and expectations, and other mass-market magazines such as Australian Women’s Weekly reflect those changes. In Walkabout, we see women emerging as important commentators shaping national conversations, even if they are also decorative features in many photographs. Women in Walkabout surf as well as frolic on the beach; they ride horses competitively and ski. They are intrepid travellers, like Ernestine Hill, who contributes 35 articles between 1935 and 1968. The garden designer Edna Walling contributed 8 articles about Australian plants and landscapes. Authors such as Miles Franklin, Kylie Tennant, and Eleanor Dark were regularly featured in Walkabout’s 1950s column “Our Author’s Page,” which sought to guide readers to the nation’s best writers, some of whom were also contributors. Women expressed deep appreciation of Australian landscapes, such as Dark’s closely observed account of the Blackall Range. 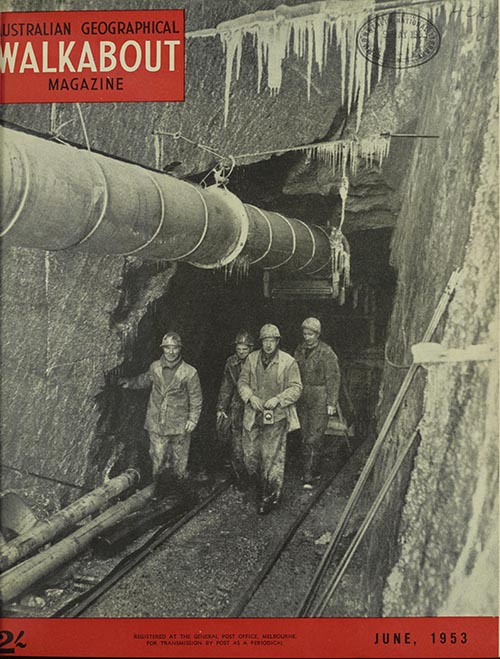 The role of the mining industry was celebrated for its modern technology, the intense labour of miners, and its economic contribution. The Snowy Mountains scheme was extolled for its great benefits for modern Australia, including immigration and employment. Yet support for development existed alongside conservationist and natural history approaches. In 1949, John Béchervaise collected plant specimens and appreciated the Snowy Mountains region’s scenic gorges alongside the industrial transformation of the landscape. The next year, Béchervaise wrote ‘How Shall We Reckon Their Value?’ about wildlife reserves, which urged the importance of learning from past environmental mistakes and careful thinking about arbitrary habitat and species destruction. Urban sprawl and the loss of agricultural land near cities was lamented, as were endangered or extinct species such as the thylacine and sea turtles. While 1972 saw the first dedicated “Conservation Issue,” such concerns had been present in Walkabout from the outset.

Australians and the Pacific

Walkabout’s well-known Australian images and narratives were matched by Pacific pictures and stories. Vestiges of the colonial era were common in the 1930s and 40s, such as accounts of missionaries and patrol-officers in Papua New Guinea. Writers like William C Groves enthusiastically called young Australians to work in the Pacific, while acknowledging some of the controversies of Australia’s role in the region. Yet the region was also imagined as a site for adventure and romance. The filmmaker Charles Chauvel wrote about Tahiti, painting compelling and romantic images of a beautiful island of contrasting scenery, climate and people for modern travellers. Advertisements for Pacific cruises were regular features (Walkabout’s advertisements make for delightful viewing). While political movements were rarely canvassed in Walkabout, the November 1972 issue was entirely devoted to Papua New Guinea’s national independence. 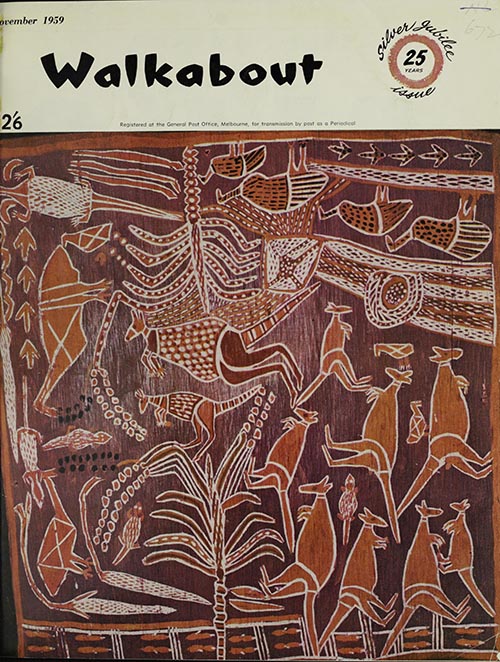 It is certainly possible to flick through Walkabout and find dated, stereotypical and derogatory representations of First Nations cultures and people. Yet there are also many complex and subtle investigations of Indigenous life during a period often characterised as comprising a silence about Aboriginal issues. Walkabout contains invaluable photographic resources. Readers could learn much about traditional society, but also about the Indigenous labour underpinning modern pastoral economies as shepherds and drovers, and Aboriginal women taking charge of tin-mining at Moolyella, Western Australia. Indigenous arts practices, both traditional and new, were regularly featured. Diverse opinions about the role of Aboriginal missions were published, both celebratory and highly critical. Again, politics was not within Walkabout’s remit, yet notably the poem “All One Race” by Oodgeroo Noonuccal / Kath Walker was published in 1965.

Walkabout urged its original readers to join them on “an educational crusade which will enable Australians and the people of other lands to learn more of the romantic Australia that exists beyond the cities and the enchanted South Sea Islands and New Zealand.” Its tone now seems nostalgic, but the sense of curiosity, awe and delight that the magazine provided readers remains fresh, and now available for new readers and new interpretations.