As a local historian, I’d already delved into Trove many times, but I’d never used this fabulous resource to explore a cold case murder before. Actually I hadn’t planned to delve into murder at all, it just happened by chance. That’s the beauty of Trove: you can focus in on specifics with multiple search filters or keep your search broad and see where it leads. For me it led to a four year project, a book and a podcast.

While looking through Trove’s online newspaper archives for information about a school teacher who taught in my local area about 90 years ago, I ‘stumbled’ across a 1929 article about teacher Norma Rhys McLeod’s mysterious death in Toorak, Melbourne. It read: “Police think she was murdered. Found on bed with garment over head: Extensive wounds”. The ‘garment’ turned out to be a pair of men’s underpants. Really? How odd! Before I knew it, I was tumbling down the proverbial rabbit hole, discovering more and more articles on Trove about this intriguing case. I was hooked. 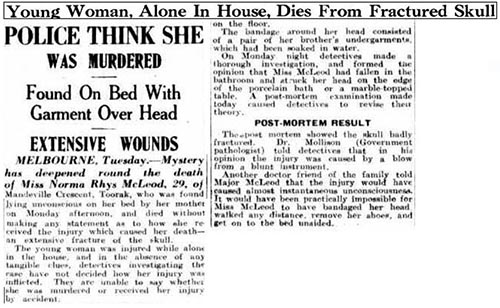 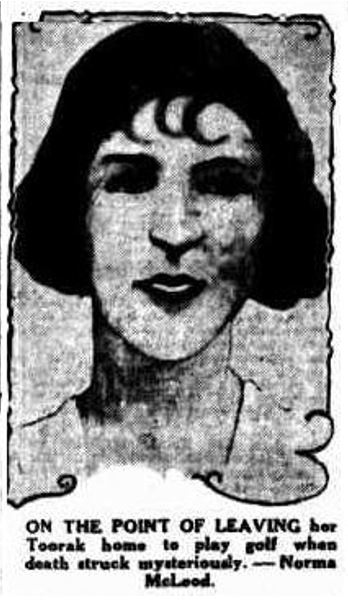 Norma Rhys McLeod, an unmarried kindergarten teacher, was 29 when she died on 9 September 1929. She was found by her mother unconscious in the family’s Toorak home and died within three hours of discovery. A post-mortem exam revealed she had a seven-inch crack in her skull caused by violent trauma to the head. This was no accident. The case (centred on a respectable family in a wealthy suburb) attracted huge press and public attention – all captured in the Trove archives - and accusations were plentiful. A series of anonymous letters from someone using the pseudonym Asmodeus, and a belief in her eccentricity led police to focus on the young woman’s mother, Edith McLeod. Did she fracture her daughter’s skull and lay a pair of men’s underpants across her forehead? I don’t believe she did … and an inquest held on 1 November 1929 found too little evidence to say. Norma’s case was relegated to a list of the unsolved and disappeared from the living memory of all but her descendants. Trove gave me the opportunity to ‘reopen’ the case, if only from a research perspective, and help the family search for answers to many remaining questions. This exposed issues of class, corruption, secrecy and abuse. 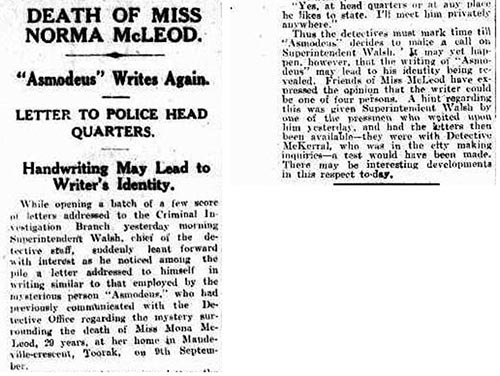 Trove provided me with the platform on which I could build my project, preparing me for an analysis of the archived police files housed in the Public Records Office of Victoria … and so the project grew. Trove was also extremely useful for discovering additional and/or contextual information (e.g. about the police strike in Melbourne in 1923 and how this might have affected attitudes to the constabulary; about individuals relevant to the case, such as government pathologist Crawford Mollison; and photographs of individuals involved in Norma’s story, such as poet Max Dunn – was he Norma’s love interest?).

Ultimately all of this research and background information gathering led to engagement with Norma’s family as well as modern day experts, such as ex-homicide detective Charlie Bezzina, forensic pathologist Dr Byron Collins and forensic psychologist Dr Karen Scally. This led to a book called Fractured Silence: The mysterious death of Norma Rhys McLeod, 1929 and a recently released podcast called Murder Archives, as well as an associated website and a Murder Archives Facebook group. All of this snowballed from a brief glance at an article on Trove …

So, whether a professional researcher, family historian, or simply someone with an interest in history, a resource like Trove is invaluable. I don’t believe there are equivalents in other countries so we are lucky to have it. Doing my research via physical library searches of newspapers would have added months of time to my project (not to mention additional travel costs), so it’s been incredible to be able do so much initial investigation from my desk. Thanks Trove!

Want to know the details of the case? Additional information about the murder can be found here.