On Sunday 14 September, 25 adults and 35 young children celebrated the launch of NLA Publishing’s new children’s book, The Rescue Ark, with author Susan Hall and illustrator Naomi Zouwer. Susan spoke about why she had written the book and about the plight of some of Australia’s endangered animals, who find their way onto the Rescue Ark in her story.

‘The book is in verse, based on the well-known song The Animals Went in Two by Two,’ she explains, ‘but instead of giraffes, elephants and tigers, I used native endangered animals such as the Australian Sea Lion, Western Ringtail Possum, Pygmy Bluetongue Lizard, Tasmanian Devil, Numbat and Native Bee. And instead of escaping a flood, they are being rescued from their own environment, where the loss of habitat has contributed to each species' potential extinction. At the end of the book, they are all welcomed back home after the kids of Australia have made the land safe for them.’ 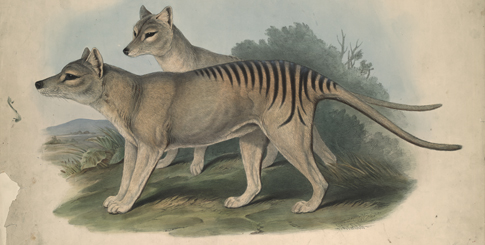 Susan read out interesting facts and showed the children images from the Library's collection, including John Gould’s Male and Female of the Thylacinus Cynocephalus (Tasmanian Tigers). ‘I chose things that I felt would appeal to children, such as showing a picture of Carnaby's Black Cockatoo and talking about the difference between this cockatoo and the ones most of the children have seen in their backyards. Likewise we chatted about the Orange-bellied Parrot and we all noticed that the male has an orange blotch on his belly, hence the name. The Orange-bellied Parrot is one of the rarest Australian parrots. There are fewer than 20 of them left in the wild, making them critically endangered.’ 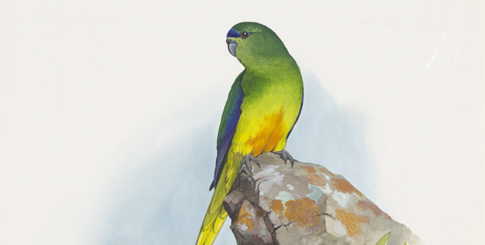 With vigorous participation in the song's actions by the children in the audience, the book was read and sung. Illustrator Naomi Zouwer spread out some of her original illustrations and showed the children how she had put the images together.

‘Creating the illustrations for The Rescue Ark was really fun,’ Naomi says, ‘because I got to use my favourite mediums and explore a new style. I used ink, watercolour, collage and Photoshop. I drew the animals in ink in a quick and loose way to keep the line inky and lively and then I painted the animals with watercolour. I made the backgrounds as separate collages made from textured papers that I splattered with paint. This process allowed me to put the animals onto the background and experiment with different layouts after I scanned them into Photoshop. In Photoshop I did things like change the opacity of the water so they seals looked like they were swimming under it.’

Naomi encouraged the children to join in craft projects, which they did with gusto, creating parrots with moveable wings to colour in, a lizard with its tongue sticking out and a leaping frog. Parents and teachers can download the project worksheets here.

An interesting morning was had by all and both Susan and Naomi hope that some facts about endangered animals made their way home and into the classroom.