RDA, the new standard for bibliographic description of library materials (and the first major change in cataloguing rules in 40 years) was successfully implemented. The Library supported the Australian library community in the implementation by providing train-the-trainer courses for educators, professional trainers, staff from cataloguing agencies, and system vendors. All training and implementation documentation was made freely available online, and the Library is facilitating practical implementation through a dedicated email discussion group. Libraries Australia services were updated to support the new standard. Within the Library, a comprehensive and tailored training program was conducted for staff, and changes to related systems, workflows and policies were all completed.

Australian libraries use the Libraries Australia Search service on a daily basis to support their cataloguing and collection management workflows. Use of the service has increased steadily over the last ten years, with a 13 per cent increase in the last year. The Library commenced a project to replace the underlying software to deliver improved performance, the capacity to support large-scale data quality improvement projects, and a more usable and efficient interface. A prototype search interface was released to Libraries Australia’s 1,200 members for comment in May; the new service is due for delivery by March 2014. Libraries Australia continues to be the primary pathway through which Australian library collections are added to Trove.

Trove’s content base grew significantly during the year, largely as a result of increased participation in the national newspaper digitisation program. Trove Newspapers was originally developed to support delivery of up to 4 million pages of content. However, the success of the Library’s newspapers contribution model has seen Trove Newspapers climb to more than 10 million pages of content this year. The combination of major increases in Trove content and a nearly 50 per cent increase in use over the last year placed strains on Trove’s supporting infrastructure and software, resulting in a significant number of service outages.

In response, the Library replaced and upgraded Trove hardware during the year, embarked on a major project to redevelop the Trove Newspapers search and delivery services (due for completion in August 2013), and completed a range of smaller scale tasks to improve reliability and performance. The redeveloped Trove Newspapers interface will be mobile friendly, reflecting the increasing proportion of Australians accessing the service on smart phones and other mobile devices. In addition, a number of features previously available in the decommissioned Picture Australia and Music Australia services were implemented in Trove.

In addition to collaborating with libraries to deliver more digitised newspaper content, the Library has increased its efforts to collaborate with other collecting institutions and organisations. Six museum collections—large and small, national and local—were added to Trove during the year, and work is under way to incorporate collections from Australian archives. In addition, significant content has been added from the ABC (podcasts and transcripts for most Radio National shows) and from the CSIRO (articles from more than 30 scientific journals dating back to 1904).

The Library continues to work collaboratively with NSLA on a range of projects aimed at transforming and aligning services offered by the national, state and territory libraries so that the needs of Australians for access to library services in the digital age can be better met.

The Library is leading the NSLA Digital Preservation Group. This group’s work will drive digital capability development over the next decade or more. During the year, the group developed a joint statement on digital preservation, defined a matrix outlining the most important components of digital preservation systems, and developed a model for a technical registry and format library for NSLA libraries.

The Library also co-led projects on managing and providing access to very large collections of pictures and maps.

The Library continued to collaborate with the international library community. The Director General attended the annual congress of the International Federation of Library Associations held in Helsinki, Finland, in August 2012, and the annual Conference of Directors of National Libraries in Asia and Oceania held in Kuala Lumpur, Malaysia, in March 2013. These gatherings provided opportunities to participate in meetings and discussion groups canvassing issues of mutual interest to national libraries, including the collecting and management of digital collections. Library staff also presented at international conferences and seminars, and liaised with colleagues around the globe.

Australia’s special relationship with libraries in the Asia–Pacific region was reinforced through a number of initiatives. These included signing a memorandum of understanding with the National Library of China, and providing significant support to the National Library of Malaysia as it prepared to implement RDA in that country.

Although the most obvious indicators of Trove use are via its dedicated interface, the last year has seen a subtle shift towards Trove as a platform for development by others. Almost all content is freely available to developers via the Trove application programming interface. In the last year, the Library has provided full copies of newspaper content to a range of national and international researchers, including the Smart Services Cooperative Research Centre based in Sydney, and Harvard’s Cultural Observatory. These organisations aim to improve the results of Optical Character Recognition and to derive semantic meaning from digitised text. The Library is facilitating such requests in the belief that these centres of excellence will eventually develop software solutions that could be redeployed into Trove and the Library’s digital library infrastructure.

At a smaller scale, a number of local developers have used Trove to develop experimental interfaces to Trove content, especially its pictorial content. In June, NSLA offered two prizes in the 2013 national GovHack competition, hosted by the Department of Finance and Deregulation. Developers from across the country used the Trove dataset to develop prototype services, ranging from a mobile device application juxtaposing modern and historical photographs of Perth, through to mixing Trove content with other data sources such as shipping indexes. The Library is assessing these developments, and considering whether any can be integrated into Trove within the existing resource base.

These developments highlight the ways in which digital data and content can be released for use in multiple national and international services, reaching wider audiences and increasing return on investment. The Library’s current and potential role as an aggregator of cultural content from the library, archives, museums, galleries and research sectors means it will be pivotal in making Australia’s cultural heritage more available to the world.

In contrast to the Library’s expanding role as a disseminator of freely available digital content, the Library closed its Electronic Resources Australia (ERA) service during the year. Established in 2007, ERA aimed to improve Australians’ access to licensed electronic resources by advocating for national or sectoral licences, and establishing a financially self-sufficient consortium to deliver common licensing terms and conditions, and competitive pricing on selected e-resource products. ERA delivered benefits to more than 1,000 libraries (principally school libraries) over its life. However, despite advocacy and considerable efforts by many, the Library reluctantly concluded that national or sectoral licences are not achievable in the foreseeable future, and that there is no sustainable business model for a service of this nature.

Deliverables and key performance indicators in relation to providing and supporting collaborative projects and services in 2012–13 are shown in Table 3.6. 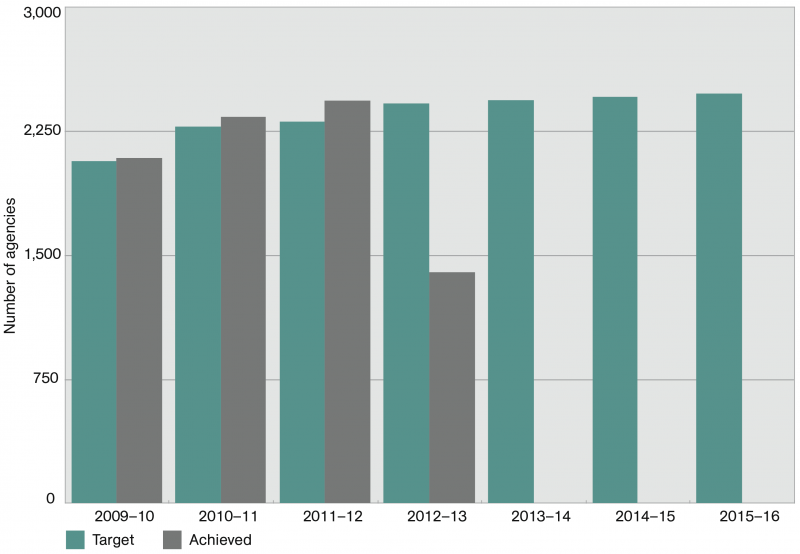 The target was not achieved due to the cessation of the ERA service. This resulted in 1,058 agencies (mainly school libraries) discontinuing their participation.

A comparison over the past four years in the number of records contributed by subscribing agencies is provided in Figure 3.5. 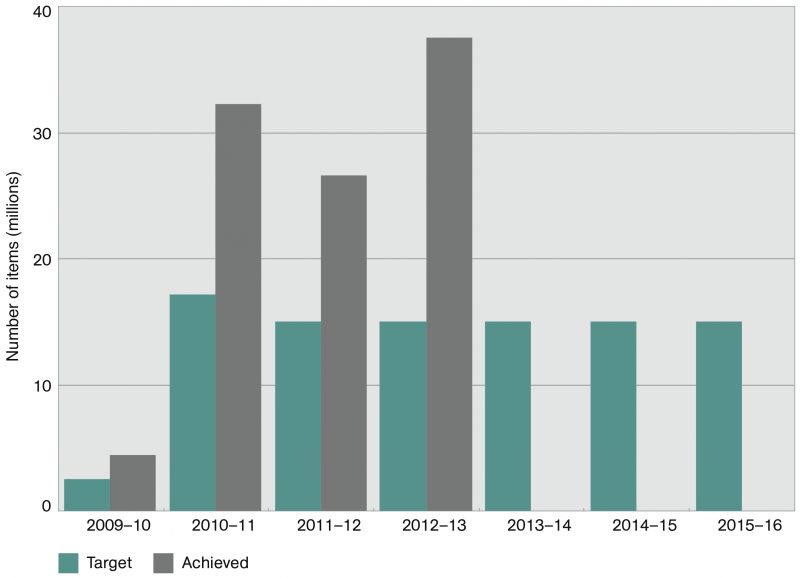 This target was exceeded. There was an increase in the number of newspaper articles and museum collection records contributed to Trove, and large batch loads of records were added to the Australian National Bibliographic Database.

Performance against the standards and timeframes for collaborative services is depicted in Table 3.7.