This appeal closed on 30 June 2016. Any donations received after this date will be directed towards The National Library of Australia Fund, which supports conservation and digitisation of the Library’s collection.

Join with us to preserve and digitise the work of internationally acclaimed composer Don Banks (1923–1980).

In a career spanning jazz performances with Graeme Bell and Cleo Laine, film scores for Hammer horror films, compositions for classical ensembles and pioneering electronic music in Australia, Don Banks was, at one time, Australia’s most successful musical export. As an enduring testament to his contribution to, and influence upon, Australian music the Don Banks Estate and the Library continue to receive frequent requests for access to his collection of work, manuscripts and papers from students writing doctoral thesis to those researching for books on the Australian music scene. Each year the Don Banks Music Award (of $60,000) is bestowed upon a musician who has made outstanding contribution to Australian music. The award is considered the nation's most valuable individual music prize and is granted only once in an artist's lifetime.

The Don Banks Collection contains some 700 hours of recordings on about 550 reel-to-reel tapes and cassettes. The majority of these recordings are Don Banks’ compositions. In addition, there are recordings of talks, interviews, seminar papers, radio programs and film scores and a number of letter cassettes. None of this material is easy to access.

With the support of Don Banks’ family and friends, we want to preserve, digitise and make available recordings of Don’s compositions held by the Library. Material which is still in copyright will then be accessible freely from the Library’s Special Collections Reading Room or online via Copies Direct for a fee.

We hope you can join us in helping to preserve and share the work of this eminent Australian composer for future generations.

In 1982 the Library acquired the music manuscripts, printed scores, personal papers, books, programs and sound recordings of Don Banks from his wife, Valerie Banks. A large collection of letters written to Don and Valerie Banks was acquired in 1998.

“The National Library of Australia’s collection of Don Banks’ manuscripts, correspondence, and recordings is an internationally significant archive... His experiments in electronic music place him at the forefront of that genre, and he was a pioneer of instruments such as the VCS3, which was an analog synthesiser designed in large part for his needs. His contribution to film music, which is extensive, remains to be fully explored... While the paper manuscripts will last for several hundred years, the tape on which the recordings are stored is reaching the end of its life, which makes its digitization a pressing necessity. We know that among the tapes are the sole copies of first performances, but the extent of what the tapes will reveal is unknown. Their digitization will enable the full extent of Banks’ work to be understood.” 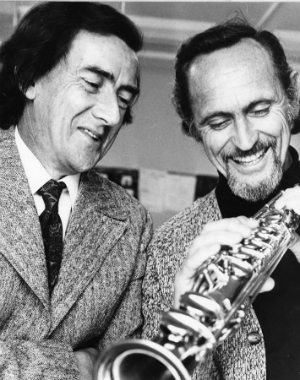 The son of a jazz musician, Donald Oscar Banks (1923–1980) was born and educated in Melbourne. He began learning the piano at the age of 5 and during his adolescence he played jazz piano. His first composition, the Don Banks Boogie, was recorded in 1941. He served in the Army Medical Corps in 1942–46 and then studied at the Melbourne University Conservatorium, graduating in 1949. He continued to play jazz, leading a sextet, the Donny Banks Boptet. His jazz compositions remain in high regard, with his work revitalised through a European band seeking permission to name their band the Donny Banks Boptet (revised) and to play his earlier pieces.

In 1950 Don Banks moved to London, where he was to be based until 1972. With Margaret Sutherland, he founded and organised the Australian Musical Association in 1951. He studied composition with Mátyás Seiber in London and later with Milton Babbitt in Salzburg and Luigi Dallapicolla in Florence. His first substantial composition was Duo for Violin and Cello, which won the Edwin Evans Prize in 1952. His Three Studies for Cello (1954) were his first twelve-tone compositions and most of his subsequent orchestral and chamber compositions belong to the tradition of the Second Vienna School. He also undertook ‘third-stream’ compositions, in which jazz and classical idioms were integrated, such as Settings from Roget (1966) which he wrote for the singer Cleo Laine. He had a strong interest in electronic music and in some works he combined conventional acoustic instruments with new synthetic ones. From the late 1950s onwards he wrote a huge amount of music for films, including 19 feature films, ten of which were horror films made by Hammer Productions. In 1969–71 he was music director at Goldsmiths College at the University of London.

In 1972 Banks returned to Australia at the request of then Prime Minister Gough Whitlam. In the following year he was appointed Head of Composition and Electronic Music at the Canberra School of Music. He was the first Chairman of the Music Board of the Australia Council in 1973–74. He moved to the New South Wales State Conservatorium of Music in 1978 as the Head of Composition. He was made a Member of the Order of Australia (AM) in 1980.

Despite living a good portion of his life in England, Don was a real Australian at heart: generous, easy-going, and often the life of a party with his sense of humour and amusing anecdotes. Thrilled to be back in Australia with the establishment of the Canberra School of Music, Don enjoyed the Canberra environment with frequent barbeques by the lake or at Kambah Pool. A versatile man with an insatiable curiosity, Don’s compositions moved with the times as he experimented with each new form of music as soon as it emerged. His home study was filled with the latest electronic gadgets and computers.

Don unfortunately died at the early age of 56, robbing Australia of many years of further compositions.