This appeal closed on 31 July 2016. Any donations received after this date will be directed towards The National Library of Australia Fund, which supports conservation and digitisation of the Library’s collection.

Suffrage, or the right to vote, is not something women have been able to take for granted. We owe our freedoms today to the tireless efforts of women in the late 19th and early 20th centuries.

Australia played a leading role in the international suffrage movement and in 1902 non-Indigenous Australian women gained the right to vote at federal elections and to stand for election to federal parliament. Leading figures in the suffrage movement in Australia included Vida Goldstein, Rose Scott, Bessie Rischbieth, and Louisa Lawson.

Our collection holds extraordinary material relating to the story of women’s suffrage, including the personal papers of Bessie Rischbieth (1874-1967). When bequeathing her papers to the Library, Mrs Rischbieth wrote: ‘It is my wish that they form the nucleus of a permanent history of … Women’s struggle for enfranchisement and citizen rights.’

Alongside letters from Vida Goldstein, Dame Enid Lyons and Sylvia Pankhurst, the collection includes photos, medals, embroidered banners and cloths, and papers relating to the International Women’s Suffrage Alliance and the United Nations. Of special interest is the collection on the suffragette movement in England between 1906 and 1928, including Letitia Withall’s hunger striker medal and Louise Cullen’s Holloway Prison brooch. 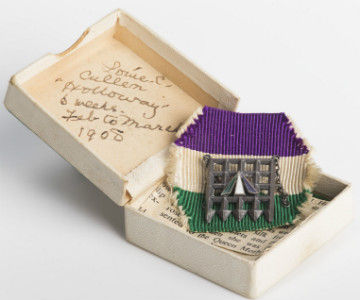 Although known more commonly these days as suffragettes, those in the women’s suffrage movement in the late 1800s and early 1900s were generally known as suffragists. The term suffragette was first used as a term of derision by journalists to belittle the work of activists in the movement. The term was embraced however by some in the movement, in particular the more militant groups such as the Women’s Social and Political Union (WSPU), who chose to pronounce the word ‘suffraGETte’. The WSPU named their journal The Suffragette and in the 1 May 1914 issue published an editorial which commented:

We have all heard of the girl who asked what was the difference between a Suffragist and a Suffragette, as she pronounced it, and the answer made to her that the ‘Suffragist jist wants the vote, while the Suffragette means to get it’.

How you can help

We are raising funds to preserve and improve access to the papers of Bessie Rischbieth and related women’s suffrage collection items. Digitising these items will make them accessible online through Trove. This will give researchers, nationally and internationally, easy access to this unique material.

Your contribution will make a significant difference to the work we do.

Donate online or phone the Development Office on 02 6262 1336 to make a donation. Donations over $2 are tax-deductible.