A Colonial Vision of Camelot

Like many other readers, I thrilled to the modern re-telling of the Arthurian legend in T. H. White’s The Once and Future King (1958) and was intrigued to find that Australia’s own Jessica Anderson had paid it a similar homage in her Tirra Lirra by the River (1978). Even so, imagine my surprise when Camelot’s dashing knights and distressed damsels rode into my ken in the National Library’s reading room.

This unexpected find, lying quietly, waiting to be lifted from its obscurity on the Library’s shelves, was Sophia Sinnett’s Illustrations to the Idylls of the Kings. Published in 1865 by the Adelaide Photographic Company, it contains albumen photographs of Sinnett’s pen and ink drawings illustrating Alfred Tennyson’s Idylls of the King. But just exactly to what genre this treasure belongs and why it should excite my bibliographical zeal, needs some explication. 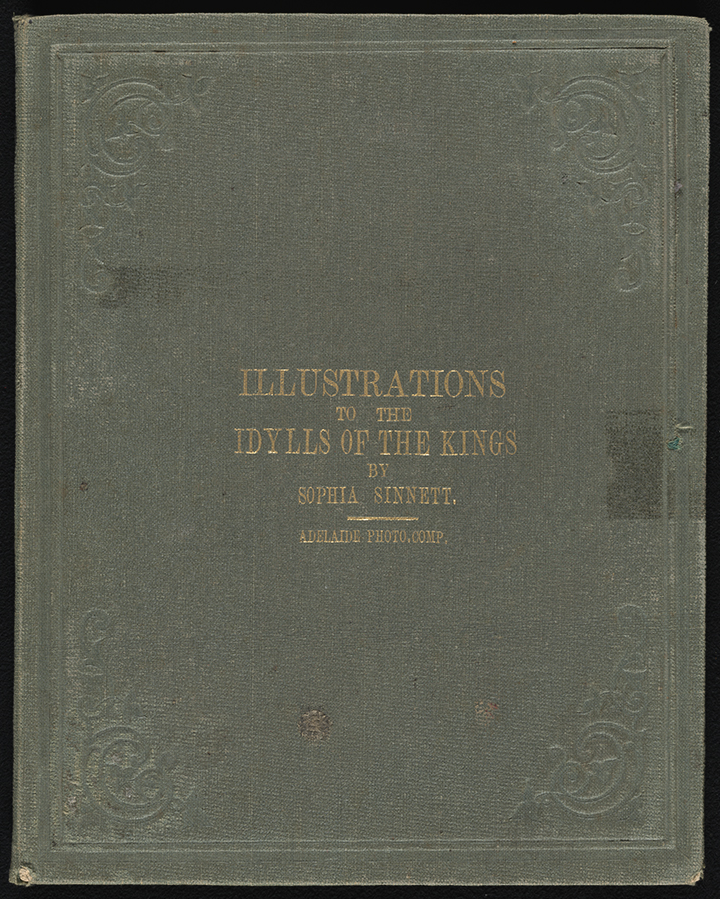 Adelaide Photographic Company, Cover of Illustrations to the Idylls of the Kings by Sophia Sinnett, c.1870, nla.cat-vn1585609

Initially, my interest was aroused because of an earlier monograph of mine that listed and described, for the first time, nineteenth-century books illustrated with original photographs produced in Australia. Photography in Colonial Australia (1988) thus contextualised and listed 130 examples in detail. Since then, that book has become a standard reference work, cited in antiquarian bookdealer’s catalogues and subsequent reference books. While Sinnett’s volume does not come within the parameters of my bibliography, it was nevertheless guaranteed to raise my excited interest.

Strictly speaking, it is not a book at all but a portfolio of 12 original photographic images, all postcard size, mounted on individually numbered cards with a few lines from Tennyson’s poetic saga reproduced below. This set is enclosed in a light brown or green cloth portfolio, blind-stamped, lettered in gilt and secured by ribbon ties. While such a description might conjure an image of a flamboyant presentation, this is a simple, standard—and even sober—Victorian format.

By comparison, when Tennyson released the first poems in his epic telling of the Arthurian legend in 1859, they were preceded by great fanfare and presented lavishly. Tennyson was at the height of his popularity—Poet Laureate and esteemed propagandist for a chivalric view of British history. It was no surprise, therefore, that 40,000 copies were sold during the first week of publication and demands for reprints were sustained throughout the century. 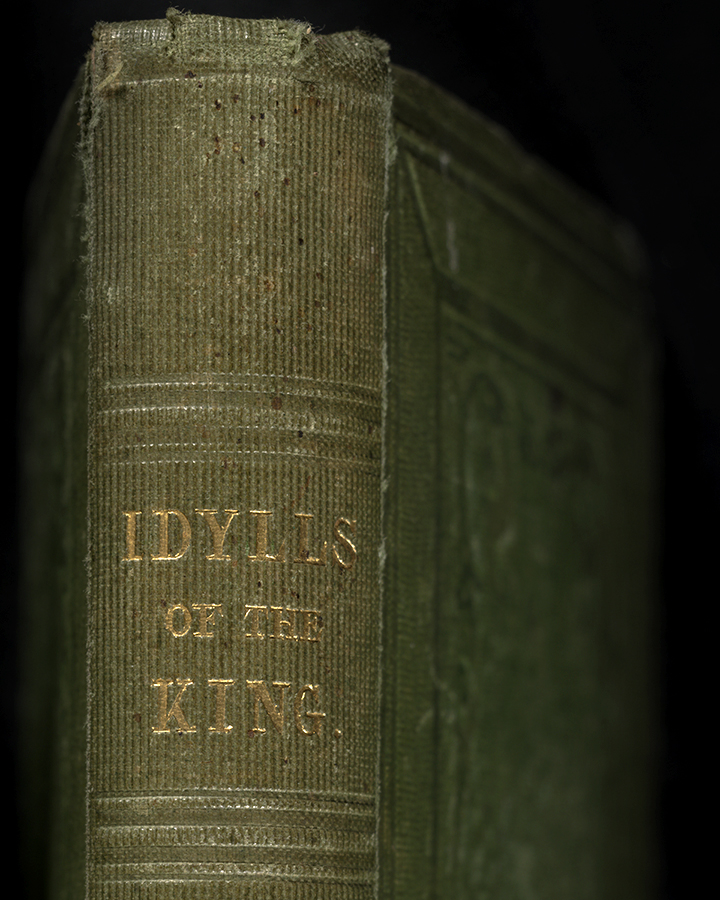 In 1863, the Art Union of London sponsored a national competition for illustrators of the work. Thereafter, as Tennyson continued to add further to his poetic saga up to 1885, a roll-call of prominent Victorian artists competed to satisfy an insatiable public demand for enlarged and illustrated editions. Perhaps none of these, however, equalled—in magisterial format alone—the four folio volumes illustrated by Gustave Doré (1832–1883) between 1867 and 1868.

This artistic interest was equally apparent in the high arts, particularly when such Pre-Raphaelite artists as William Holman Hunt and Dante Gabriel Rossetti drew inspiration from the story of the Lady of Shalott. But while this lovelorn figure drifting in her boat and languishing in her tower became a popular artistic motif in European art, I did not realise that interest in the Arthurian saga also extended to the Australian colonies.

How often do we imagine that during the colonial years British Australians felt they were at the furthest reach of civilisation, isolated intellectually and somewhat starved of cultural contact? Once again, the truth is that these assumptions are mere furphies and that Sophia Sinnett was leading her own Antipodean charge to the forefront of Tennyson’s illustrators. 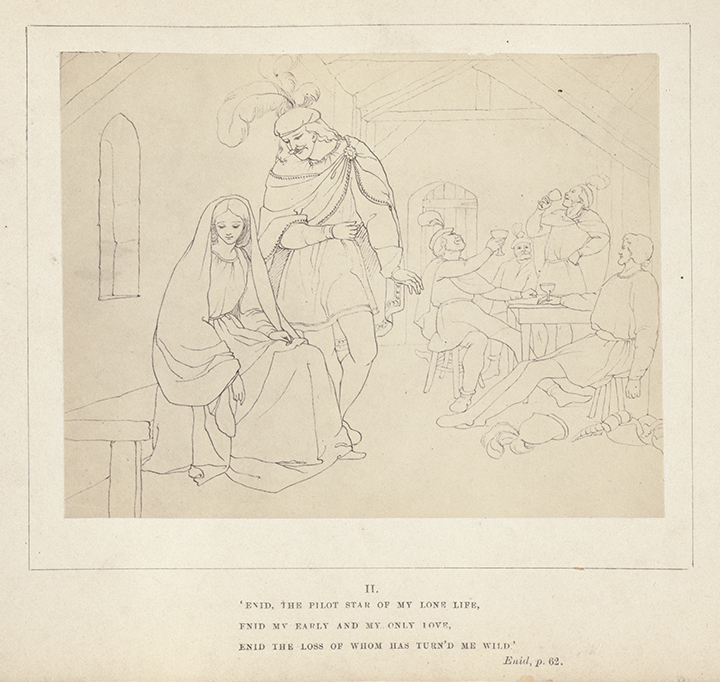 Sophia Sinnett, Plate II in Illustrations to the Idylls of the Kings by Sophia Sinnett, photographed by the Adelaide Photographic Company c.1870, nla.cat-vn1585609

Sinnett, born around 1828 in Germany to British parents, became a professional painter who showed with the London Royal Academy and the Society of British Artists. Until now, the date of her arrival in Australia has been as uncertain as her birthdate. Thanks to the National Library's Trove service, my own research, however, has revealed that she arrived in Adelaide from England on 12 July 1863 as a passenger on the Orient. She quickly settled into the fledging cultural life of the colony, contributing work to the South Australian Society of Arts. By early 1865, the South Australian Register was advertising her photographically illustrated poem: ‘Now Ready, Price 1.1s’.

Thereafter, the press in both South Australia and Victoria reviewed her effort, although, if the number of extant copies today are any indication, her sales were meagre—only three copies are recorded in public collections. Even so, the author must have taken pride in a number of press notices that her work received. The Age (Melbourne)thus enthused over the plates: ‘They are sketchy in character, but the drawing is excellent, and the character portrayed in the various figures shows the artist to be one of no mean power’.

Surprisingly, the South Australian Advertiser prefaced its commendation with the opinion that ‘photography is now very commonly made available for the illustration of books.’ This is a wild claim, certainly in an Australian context, and one that was completely false. My own bibliography of nineteenth-century Australian books issued with original photographs identifies only three examples before 1865.  And it surely serves to highlight how confused even the educated public of the day were about the new medium of photography: a confusion further apparent when the same newspaper called Sinnett’s pen & ink drawings both ‘etchings’ and ‘photograms’. Obviously, they were completely uncertain as to their true technical description and status. 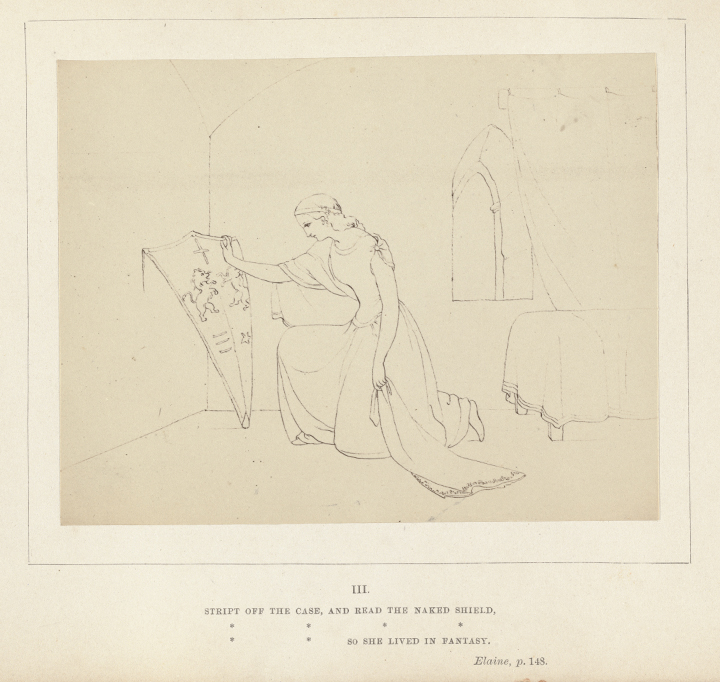 Sophia Sinnett, Plate III in Illustrations to the Idylls of the Kings by Sophia Sinnett, photographed by the Adelaide Photographic Company c.1870, nla.cat-vn1585609

Furthermore, Photography in Colonial Australia lists only 23 publications issued throughout the entire decade of the 1860s. And since most of these were very small editions, sometimes for private circulation only, or sometimes limited to a small provincial audience, they were hardly a total sufficient enough to establish the new illustrative format as being ‘very commonly made available.’ In striking contrast, and with more balance and truthful candour, the South Australian Register was struck by the achievement of perfect facsimiles of Sinnett’s drawings. It was an opinion which more honestly revealed that such a process was still a great novelty in the colonies.

Although the degree to which other colonial artists of the time were proficient with the new medium is still a matter for further research, practitioners are known to include S. T. Gill and Louis Buvelot. Later in the century, Tom Roberts combined the role of art student with photographic assistant and W. C. Piguenit based much of his landscape work on photographic models and even included examples of these in an 1870 Sydney exhibition.

Today, our reactions and opinions can be both more knowledgeable and appreciative.  While most modern commentators might discern a Pre-Raphaelite influence in Sinnett’s drawings, it is more pertinent for us to evoke the name of the English Neoclassical artist John Flaxman (1755–1826). His outline illustrations in the ‘antique’ style against a white background, which recalled the flat decorations on ancient Greek vases, had steadily gained popularity since his death. It is to his example that Sinnett surely paid homage.

Equally, today, we can credit Sophia Sinnett both for her pioneering role as a woman artist in colonial Australia as well as for her willingness to embrace the new technological opportunities that photography offered. To highlight her status it is enough to consider the international context of her work. Significantly, it would be another full decade before the highly celebrated British woman photographer, Julia Margaret Cameron (1815–1875) produced her own edition of the Idylls with original photographs. 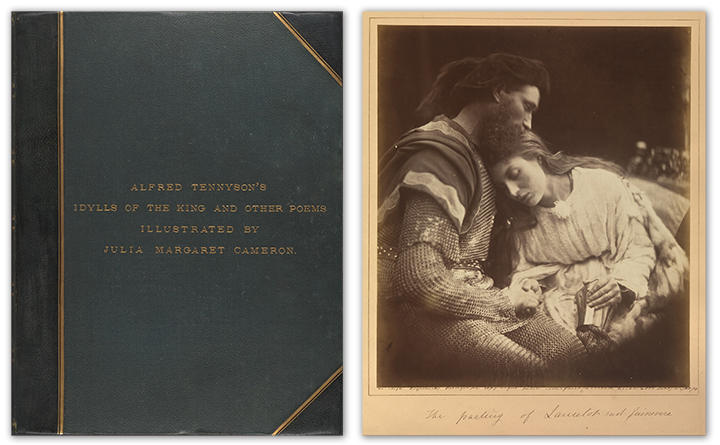 Cameron’s two folio volumes, issued between 1874 and 1875, used single and posed groups of tableaux settings to illustrate Tennyson’s poems. Although her opening image was a striking one of Tennyson himself in costume, even his popularity does not seem to have been enough to encourage wide sales of the sets at the astonishing price of six guineas. Sadly, today, only five copies of these complete sets exist in public collections—a sobering fact that puts Sinnett’s own achievement in even greater perspective.

To date, the most authoritative survey of women artists in colonial Australia, Joan Kerr’s Heritage (1995), has raised a sole voice here in Sinnett’s praise. It extolled the portfolio as ‘a very early Australian example of photographs being sold commercially as a narrative rather than as single unconnected images in an album’ and considered that they made ‘a notable—indeed unique— contribution in the history of Australian art.’ This is an assessment to which we can only add a trumpet fanfare from the fabled battlements of Camelot.

Robert Holden is a Sydney-based curator, librarian and lecturer. His book And The Band Played On: How Music Lifted the Anzac Spirit in the Battlefields of the First World War was the basis of a National Library exhibition in 2016.