On 15 March 1819, in the fledgling penal colony of Hobart Town, then just 15 years old, Australia’s first work of general literature was published—a small pamphlet entitled Michael Howe: The Last and Worst of the Bushrangers of Van Diemen’s Land. A contemporary London reviewer thought it ‘the greatest literary curiosity’ he had ever seen and it became, as he predicted, one of the rarest books in the world. The National Library owns one of only four known surviving copies of this curious yet significant little work. The others are in the Bodleian and British libraries, and the library of Sir Walter Scott. 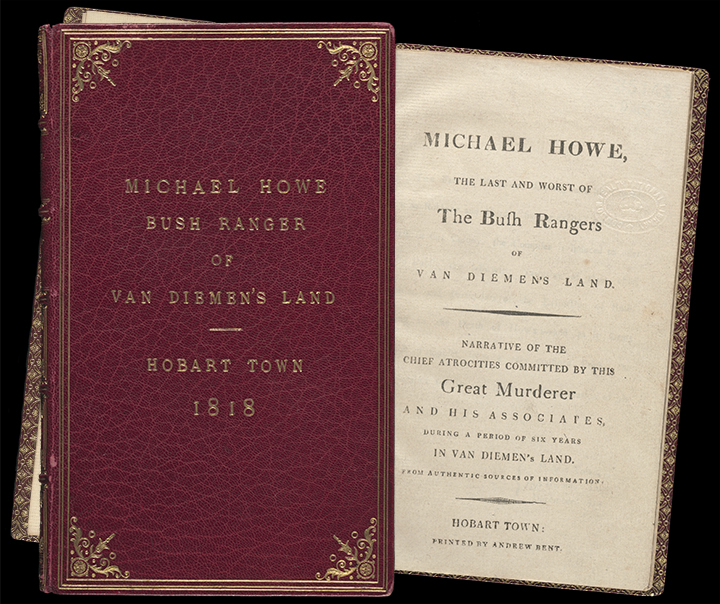 Michael Howe, transported for highway robbery, arrived in Van Diemen’s Land in 1812. He soon took to the bush, becoming leader of the convict runaways who terrorised the settlement for years. This self-styled ‘Lieutenant-Governor of the Woods’ remained at large after the other bushrangers were captured or killed, so it caused quite a sensation when, in October 1818, he was finally beaten to death in the bush and his severed head displayed in Hobart Town.

The pamphlet, detailing Howe’s exploits, was printed by Andrew Bent. Bent, transported for burglary, had also arrived in Hobart in 1812, possessing only printing skills and an industrious and innovative disposition. Within four years, he was conditionally pardoned, became government printer, and started what became Tasmania’s first successful newspaper, the Hobart Town Gazette. He produced many significant early Australian imprints and is also noteworthy as the first newspaper publisher in Australia to free his newspaper from government control, and for his dogged fight for press freedom.

Bent originally intended to give an account of Howe in his newspaper but did not have enough space. He printed the pamphlet on the small wooden hand press brought to Hobart by Governor Collins in 1804. Much of Bent’s small supply of type was worn out and he was desperately short of paper. The National Library copy and two of the other survivors are printed on poor quality rice straw or ‘China’ paper.

The book received extensive exposure in Britain when, a copy having been taken to England (probably by influential settler Edward Lord), it was reviewed in the Quarterly Review in May 1820. The article included a favourable description of Van Diemen’s Land written by Justice Barron Field of Sydney, who was in Hobart while Michael Howe was in the press. This, the first real publicity exercise to promote Van Diemen’s Land, greatly encouraged free emigration, although the word ‘last’ in the book’s title proved to be wildly optimistic.

In 1926, Angus and Robertson published an edition of Michael Howe based on a newly discovered manuscript version in the hand of Governor William Sorell’s clerk Thomas Wells. Since then, authorship has been generally attributed to Wells, although there is no evidence in the manuscript itself or in contemporaneous sources that he was the author rather than a copyist. In 1829, Bent clearly identified himself as compiler, printer and publisher.

The well-travelled National Library copy surfaced in England in 1944 at an auction of part of the massive library of Sir Robert Leicester Harmsworth. It was purchased by Maggs Bros. and the Library then secured it through its new liaison officer, L.C. Key. Its early provenance is unknown, although its excellent condition suggests that, like the other surviving copies, it made the hazardous journey to Britain quite soon after publication. It has been elegantly bound by William Pratt, whose stamp also appears on bindings done for prominent London book dealer Henry Stevens between the 1840s and 1880s. The book has little literary merit but is important because of the extraordinary circumstances surrounding first publication, the influence it had, and its rarity two hundred years on.

Sally Bloomfield is a retired librarian and former National Library staff member. She is a descendent of printer Andrew Bent, has published a bibliography of his printing and is working towards a biography in collaboration with Craig Collins.