The English love of a cup of tea and their role in promoting it globally is well known. In 1757, Samuel Johnson, the celebrated writer and lexicographer, exemplified that desire when he wrote a defence of his tea habit in The Literary Magazine. He considered himself 'a hardened and shameless tea-drinker … whose kettle has scarcely time to cool; who with tea amuses the evening, with tea solaces the midnight, and, with tea, welcomes the morning.' While Johnson’s silver teapot exists in an American collection, it appears the author lacked a smart silver tea set, or veilleuse, to slake his night-time thirst. Acclaimed botanist and traveller Sir Joseph Banks, however, certainly owned such a necessity. 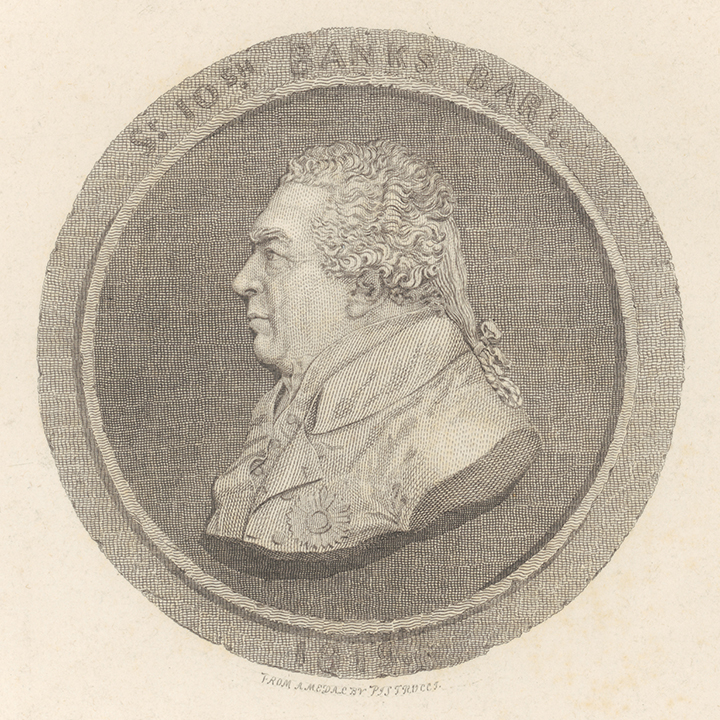 The collector Rex Nan Kivell occasionally strayed from acquiring pictures, books, manuscripts and maps into the world of antiques, or ‘association objects’: pieces once owned by people considered significant in history. The range of Nan Kivell’s object purchases was impressive—not huge in number but remarkably varied in type. From Captain Cook’s bamboo walking stick and instrument box to the entire facade of Joseph Banks’ famous house, Nan Kivell bought, and sometimes disposed of, items of all kinds.

The celebrated figure of Sir Joseph Banks was conspicuous in Nan Kivell’s collecting. He acquired dozens of portraits of the Cook-voyager, eminent botanist and venerable president of Britain’s Royal Society for over 40 years. This significant piece of silver (NK29), which had previously been owned by Queen Charlotte, wife of George III, and then given to Banks, was a prized purchase. The small veilleuse—a teakettle and a spirit lamp—has taken a central place in the Library’s Treasures Gallery since opening. Veilleuse comes from the French words meaning ‘night light’, referring to the evening glow emitted while such a kettle warmed beside one’s bed. 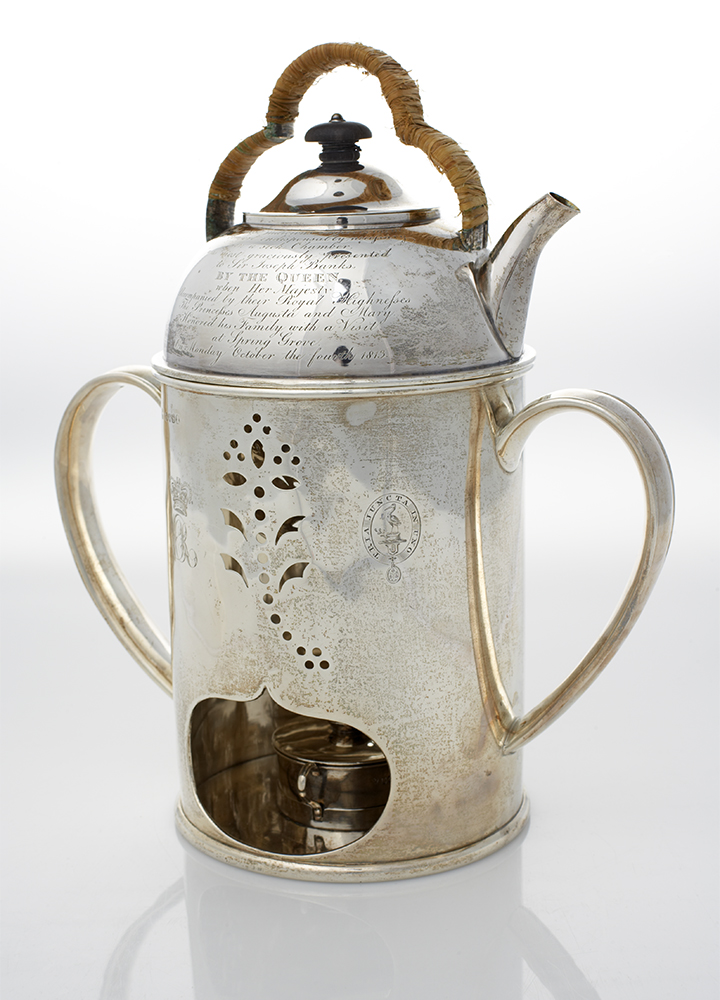 Banks’s veilleuse was crafted in London by well-known makers Rebecca Emes and Edward Barnard. The business, one of the oldest manufacturing silversmiths in Europe, was started by Anthony Nelme around 1680, and Emes and Barnard became one of the largest manufacturing silversmiths in Europe, supplying other important London companies, such as Rundells and Garrards.

This most judicious improvement

Of a Comfort indispensably necessary

in a sick Chamber, was most graciously presented

Accompanied by their Royal Highnesses

The Princesses Augusta and Mary,

Honored his Family with a Visit

On Monday October the fourth 1813.

The wording suggests the kettle was subsequently engraved to memorialise Queen Charlotte’s visit to his house Spring Grove, which was not far from the Queen’s House in Kew Gardens. Queen Charlotte visited Banks numerous times at Spring Grove during the period in which, he noted, ‘his legs became, by Excess of Gout of little use to him’ and he took to his wheelchair. His debility did not prevent him from providing a sumptuous luncheon for the royal party on 4 October 1813, which ended with cranberry tart, peaches, nectarines, grapes, strawberries and plums from his impressive and productive garden. The Queen and Princess Augusta drank coffee, but Princess Mary and Banks preferred green tea. 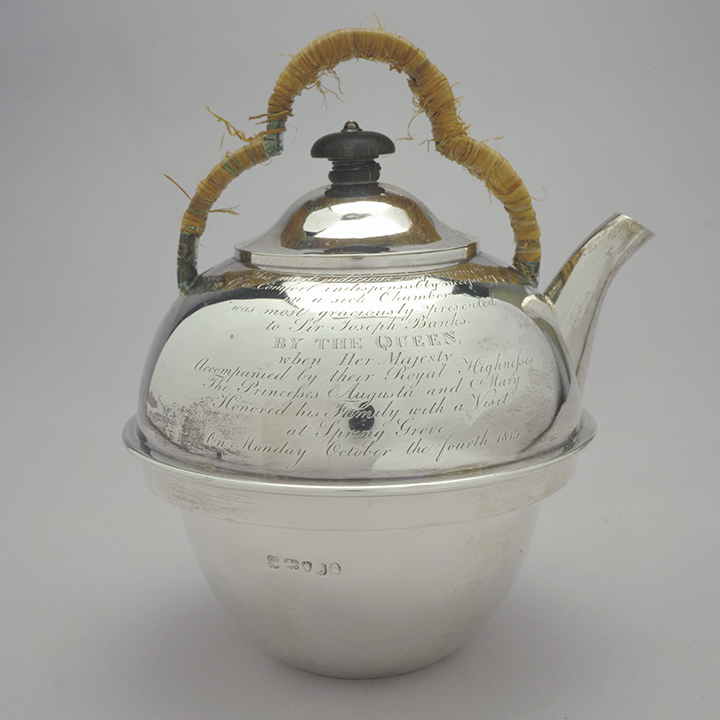 Apart from the maker’s silver hallmarks, which date the piece to 1813, the year of its gift to Banks, the veilleuse also carries the arms of the royal household and the stamped insignia of the Order of the Bath, which was founded by George I and of which Joseph Banks became a member in 1795. In the autumn of 1813, the 70-year-old Banks was failing, but at least in his gouty confinement, whether in his wheelchair or propped up in bed and still writing to his innumerable correspondents, he could sip his warmed green tea. 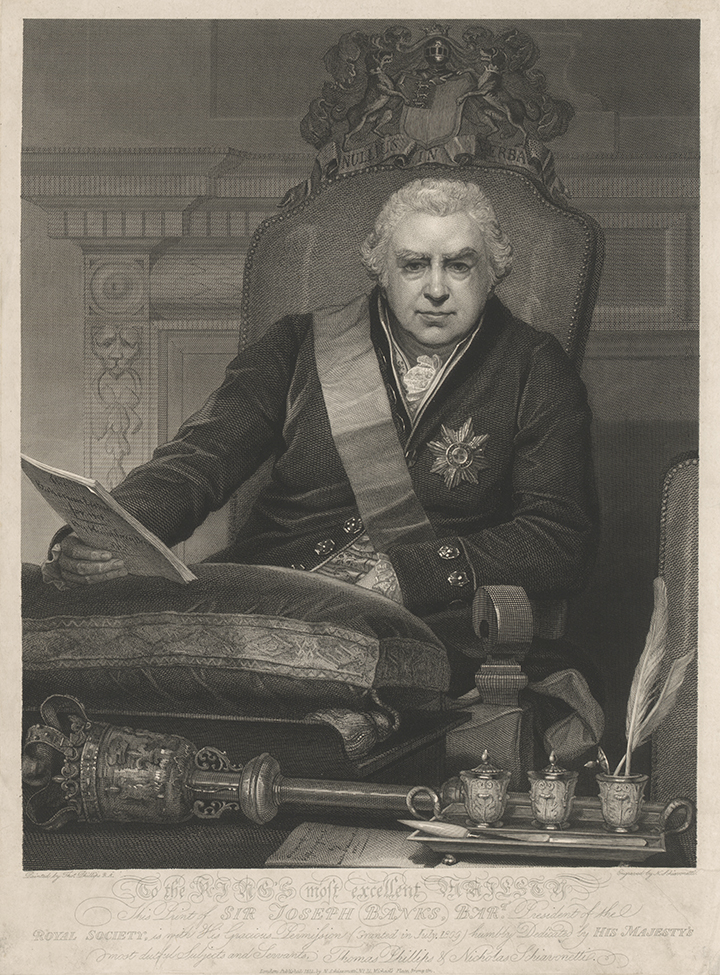 Nan Kivell acquired his treasured veilleuse in 1941 from a Christie, Manson and Wood auction of the estate of the late Sir Lionel Faudel-Phillips, Baronet, a major silver collector, owning pieces by Paul Storr, Augustine Courtauld, Francis Nelme and items from the reigns of Charles II, Queen Anne and from the Georgian era. The baronetcy died with Faudel-Phillips, an ex-Lieutenant of the City of London, and the two-day sale was held at Derby House on Stratford Place, Mayfair, over 12 to 13 June. Nan Kivell did not have far to stroll to acquire this treasure: it was only a ten-minute walk from his Redfern Gallery, though he, of course, recalls acquiring it during an air raid—a necessary embellishment it seems, simply to add piquancy to his collecting narrative.