Norman Lindsay is one of Australia’s most prolific artists of the twentieth century. Perhaps the most famous member of the talented Lindsay clan, he was a major figure in Australian cultural life from when he joined The Bulletin in 1901 until his death in 1969. His work is held in collections across the country, including most major libraries and galleries. You can also visit his former home at Faulconbridge in the Blue Mountains, west of Sydney. Maintained by the National Trust, and now known as the Norman Lindsay Gallery and Museum, the site is dedicated to celebrating Lindsay’s life and works.

The Library’s holdings of Lindsay material relate primarily to his work as a writer, illustrator and cartoonist. This includes copies of his published works, correspondence with a range of leading poets and writers, and an oral history interview, as well as some excellent examples of his Bulletin cartoons and propaganda posters produced during the First World War. 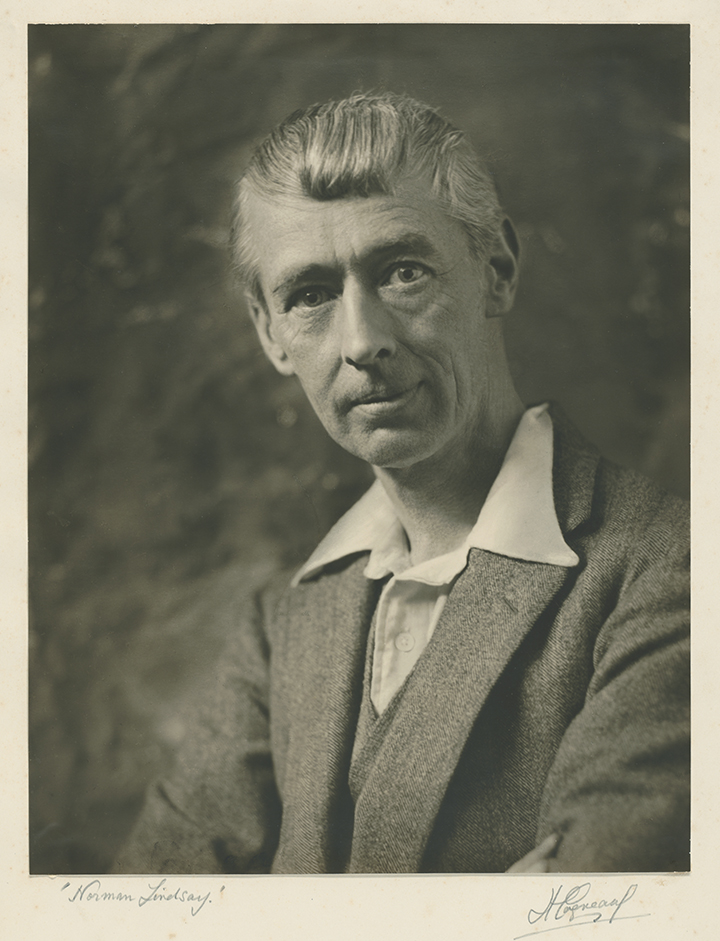 Revisiting Lindsay’s work today can be a strange experience. Flicking through the pages of The Bulletin, or reading his accounts of life in Sydney in the early 1900s, can leave you feeling like a ‘stranger in a strange land’. His Bulletin cartoons regularly feature racist and anti-Semitic imagery, and his depictions of women can be seen as a caricature of the male gaze. Reading Lindsay’s memoirs and his fascination with the feminine form can, at times, be disturbing. Lindsay, no doubt, would dismiss these concerns as ‘wowserism’. As a leading figure of Sydney’s bohemian subculture of the 1920s, he repeatedly asserted the right of artists to pursue their creative impulses. For him self-expression was the paramount virtue.

While Lindsay’s work can be challenging from the perspective of the twenty-first century, there is no doubt of his importance to Australian cultural life in the first half of the twentieth century. He possessed a work ethic that put many of his contemporaries to shame. Throughout his career he produced thousands of cartoons, illustrations, etchings, sculptures, models and paintings.

Lindsay also established himself as a major writer, completing a body of work including: 11 novels; two children’s books, including The Magic Pudding (1918); a wealth of criticism and philosophy; and two memoirs. Three of his novels—Red Heap (1930), The Cautious Amorist (1932), and The Age of Consent (1938)—carry the distinction of being banned by the Australian censor. 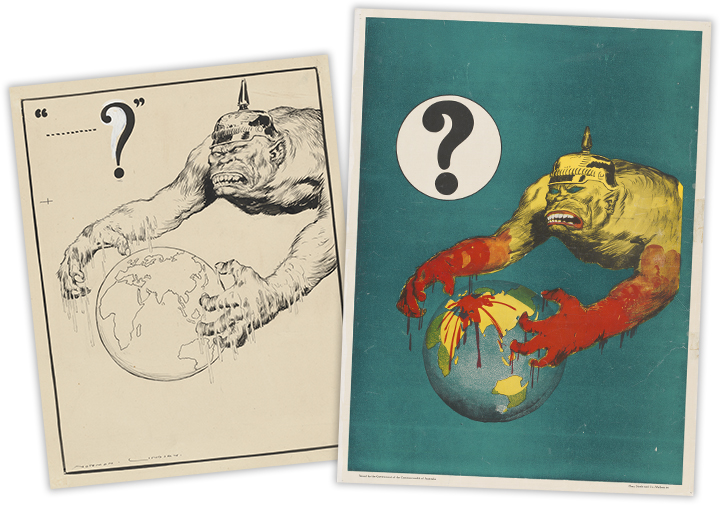 For me personally, Lindsay’s work as a cartoonist and illustrator offers the most interest. From 1901 up until the Second World War, he was a regular contributor to The Bulletin, one of the most influential journals of the period. Other Bulletin regulars of this period included Livingston Hopkins, Henry Lawson, Banjo Paterson and Hugh McCrae.

In the lead up to the First World War, The Bulletin was at the height of its powers. It enjoyed a wide circulation across Australia and provided a forum for exploring the hopes and fears of a young nation. The Bulletin self-consciously took on the project of defining what it means to be Australian and set about employing the best writers and artists available to complete this task.

While Lindsay drew many joke cartoons and illustrations for The Bulletin, it was his full-page cover cartoons that attracted the most attention. These were given a place of prominence on the Bulletin’s title page, just inside the journal’s distinctive red cover. These cartoons demonstrate the clarity and precision with which Lindsay enthusiastically prosecuted the Bulletin’s editorial line. He crafted images supporting a White Australia, Federation and tariff protection. 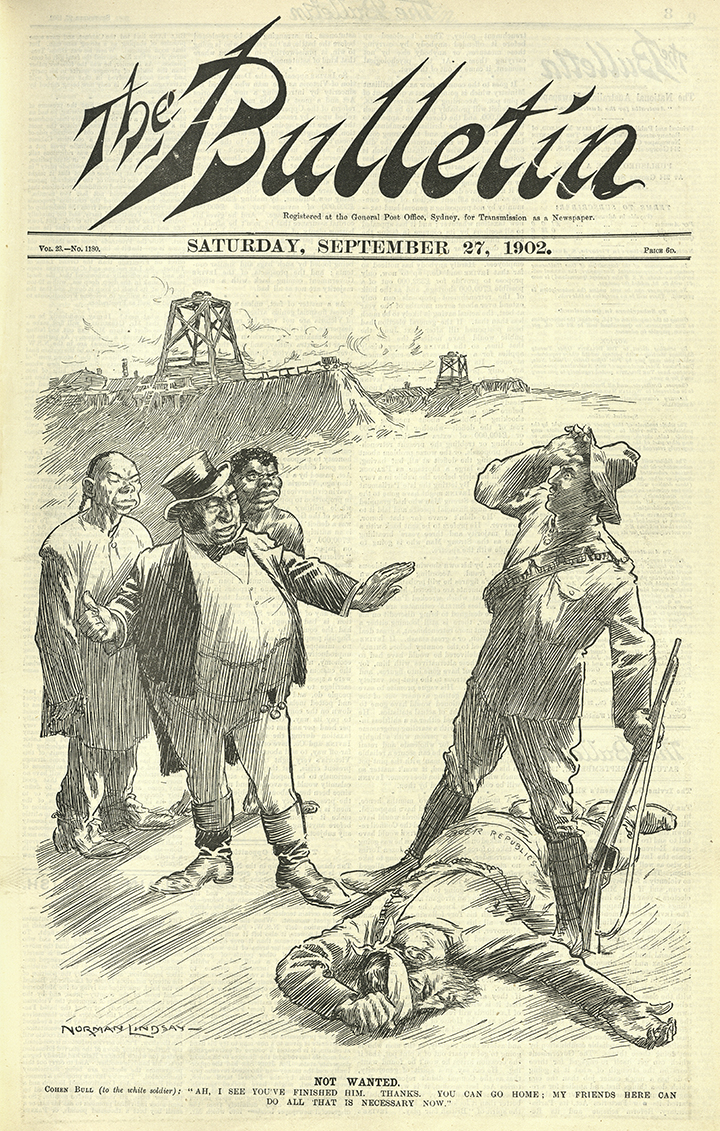 The recent completion of the digitisation of much of The Bulletin means it is now possible to easily access Lindsay’s numerous front-page covers. These cartoons provide a window into the political and cultural debates that were unfolding in the Australian press. In one striking image you can see a number of issues combined with an overlay of The Bulletin’s campaigning viewpoint.

In the 27 September 1902 edition, not long after the end of the Second Boer War, you can see an Australian soldier standing astride a defeated Boer. A cheerful and rotund John Bull character implores the Australian to step aside. The caption reads: ‘Ah, I see you’ve finished him. Thanks. You can go home. My Friends here can do all that is necessary now.’ In the background there are two caricatures of a Chinese labourer and an African. The cartoon combines The Bulletin’s anti-imperial stance with its fear and loathing of Asian and coloured labour. In other Bulletin cartoons, Lindsay warns of the dangers of the ‘yellow peril’ and the importance of keeping Australia white. Lindsay had no qualms in illustrating The Bulletin’s editorial line and, indeed, was often enthusiastic in his support of its white nationalist polemic. 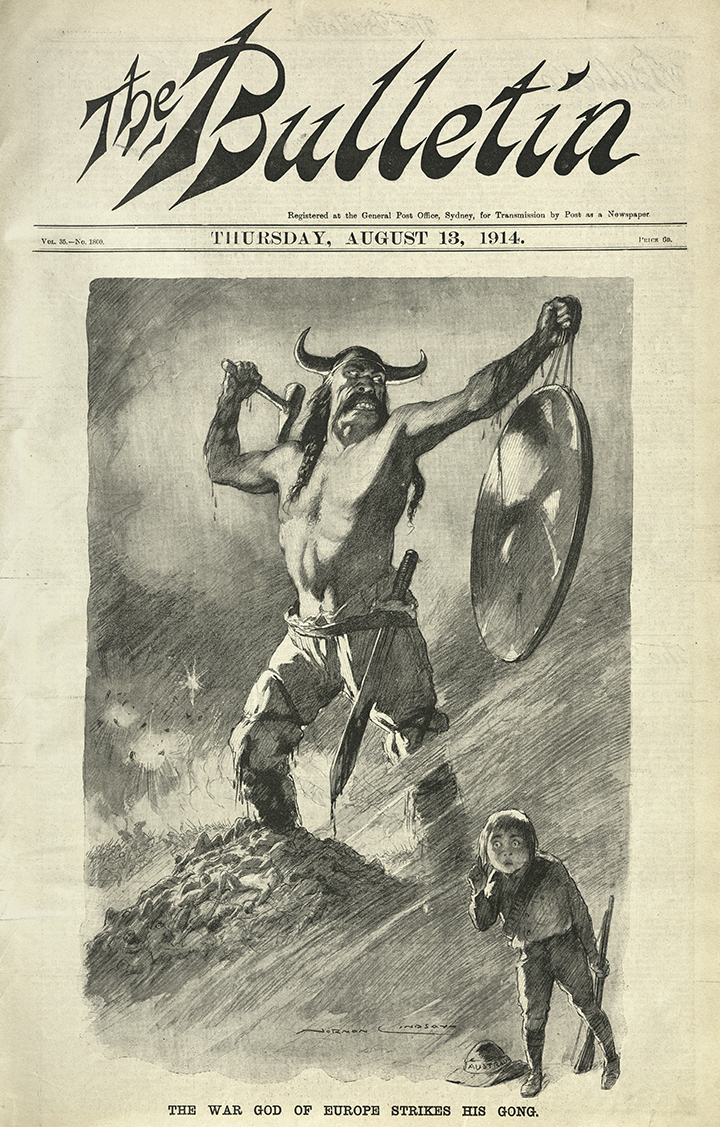 During the First World War, Lindsay’s cartoons were zealously patriotic, encouraging readers to volunteer and support the war effort. At the outbreak of the war, Lindsay depicted Australia as an innocent young boy startled by the sound of a Germanic war god striking his gong. This mythic character of the war god was one he would use repeatedly throughout the conflict.

Lindsay took every opportunity to demonise the enemy in his cartoons. Square-jawed Australian soldiers faced off with brutish caricatures of Germans, their faces distorted and moustaches waxed. The question he posed his readers was what would happen if the ‘Huns’ ever made it to Australia? He left little to the imagination, making it clear that our womenfolk would not be safe.

The propaganda value of Lindsay’s cartoons was recognised by the government and, towards the end of the war, he took up the task of designing enlistment posters. The Library is in the fortunate position of holding both the original artwork for many of these posters as well as examples from the numerous print runs. 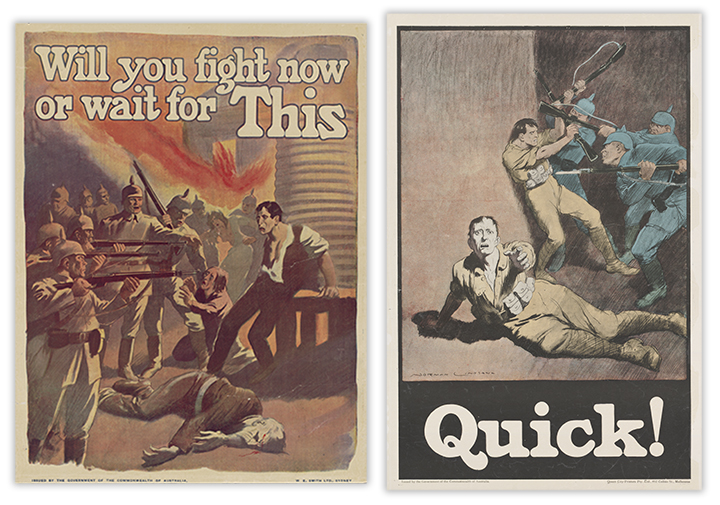 While Lindsay had been a strong supporter of the war effort, he was also aware of the great loss of human life and suffering that came with the war. In his cartoon published at the end of the conflict, he drew the grim reaper and the devil sitting exhausted under a broken tree, satisfied with the work they have done.

Today, much of Lindsay’s work from The Bulletin reminds us of the battle for ideas that was occurring within Australia at the beginning of the twentieth century. His drawings of leading political figures and life in the city and the bush show his affection for a young Australia. They also reflect his strong support for the white nationalist platform loudly trumpeted by The Bulletin. When you look at this cartoons you cannot help but be impressed by the volume and quality of his work as a draughtsman. You also cannot help but be reminded that racism is deeply embedded in the DNA of modern Australia.

Guy Hansen is Director of Exhibitions at the National Library of Australia.