Now less well known than his contemporaries Samuel Taylor Coleridge, William Wordsworth and Jane Austen, the essayist Charles Lamb (1775–1834) was one of the most popular writers of the nineteenth and twentieth centuries.

Many people of a certain generation would possibly recall Lamb’s The Tales of Shakespeare (1807), jointly written with his sister Mary Lamb, as a fixture on the bookshelves of Australian classrooms.

Second-hand bookshops in country towns almost invariably have copies of Lamb’s Essays of Elia or the Tales of Shakespeare, sometimes dusty and dog-eared from school-use or annotated by former readers. The resources of the National Library—in the form of the special collection of Lamb-related material amassed by Claude A. Prance and the Trove newspaper database—offer important evidence of why Lamb mattered to Australians for so long. 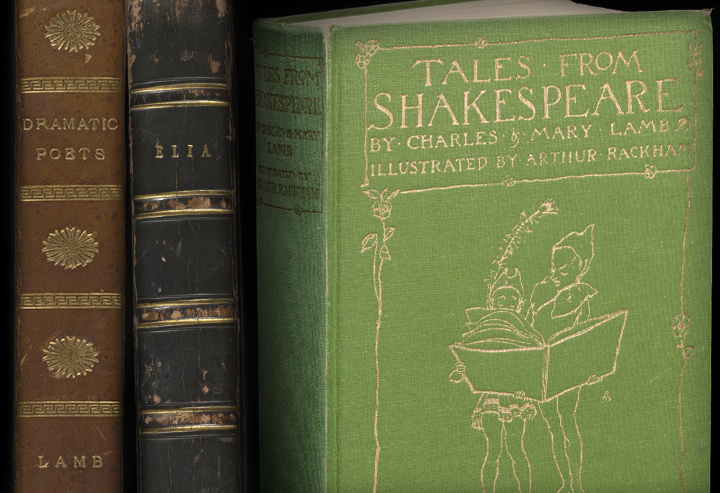 Selected works from the Prance Collection: Specimens of English Dramatic Poets, Who Lived about the Time of Shakespeare by Charles Lamb (London: Printed for Longman, Hurst, Rees, and Orme, 1808), nla.cat-vn1050003; Elia: Essays which have Appeared Under that Signature in the London Magazine by Charles Lamb (London: Printed for Taylor and Hessey, 1823), nla.cat-vn707907; Tales from Shakespeare by Charles and Mary Lamb, Illustrated by Arthur Rackman (London: Temple Press, 1909), nla.cat-vn2240982

Lamb’s most important connection with Australia was via his friend Barron Field (1786–1846), who in 1817 moved to New South Wales to become a judge on the Supreme Court. Field’s main claim to literary fame is his authorship of the first book of poems published in Australia, The First Fruits of Australian Poetry, printed in 1819. Lamb used his literary connections to publicise the volume in England and reviewed it anonymously in The Examiner magazine in January 1820. He later based his essay ‘Distant Correspondents’, first published in March 1822, on a letter he had sent to Field in 1817. In that letter, he contemplates when his friend would read the missive and their ‘different chronologies’: ‘Your now is not my now; and again, your then is not my then; but my now may be your then, and vice versa. Whose head is competent to these things?’

In both the letter and the essay, Lamb draws attention to time difference and the media of communication as distinctive aspects of Australia’s relationship with the rest of the world. He was the only major imaginative writer of the Romantic period to write about relations with the colony in this way and Australians remembered him for this, as well as for his connection with Barron Field. In 1875, The Australasian newspaper devoted a long article to ‘Distant Correspondents’, musing,

what would Lamb have said if somebody had told him that 60 years later friends in Sydney would be conversing with friends in London at the rate … of Puck’s proposed expedition around the globe?

(A reference to Puck’s scheme in Shakespeare’s Midsummer Night’s Dream of putting a girdle round the world in 40 minutes). In 1888, stationers Marcus & Andrew, of Sydney, reprinted ‘Distant Correspondents’ to commemorate the beginning of ‘the second century of a most marvellous history’, considering Lamb’s essay to be a measure of how far the colonies had come. The image of Lamb on the cover of the pamphlet, punning on the relationship between the writer and one of the colonies’ major exports, also suggests the affection in which Charles Lamb was held. Australians’ love of Lamb was reaffirmed in 1935, again in relation to the essay ‘Distant Correspondents’, in an article in The Tweed Daily. In addition to declaring that ‘every Australian knows and loves Charles Lamb’, the writer noted with some wonder that ‘Distant Correspondents’ made ‘odd reading in these days of three-day aeroplane flights across the world, of wireless photograph transmission and Empire broadcasts.’ 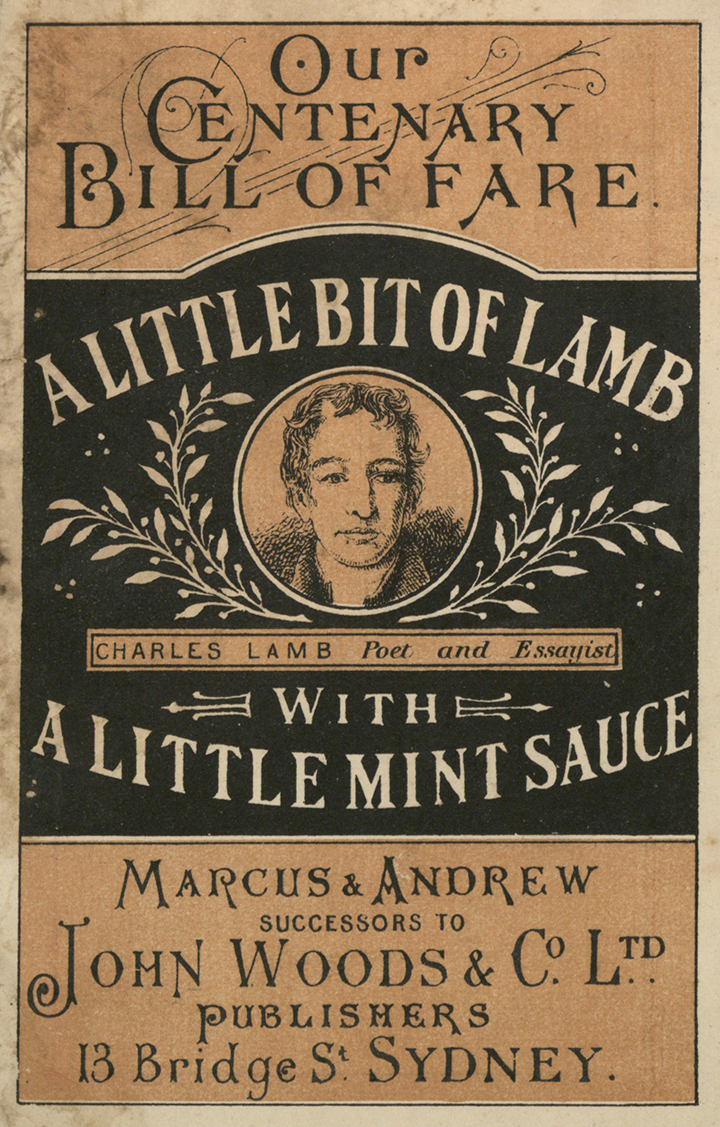 Australian readers were drawn to Lamb because of the way he articulated the experience of the distance, real and emotional, between Britain and Australia. The themes of nostalgia, memory and loss that recur in his essays made him a touchstone for many migrants to Australia in the nineteenth century. A notable example is James Smith (1820-1910), born in Kent, who moved to Melbourne in 1854 and established a career as one of Victoria’s leading journalists, working on The Age and later The Australasian. In addition to being a founding member of various clubs in Melbourne, Smith was Victorian parliamentary librarian for a period and a patron of the visual arts, proposing the foundation of a national gallery. Before his death in 1910, Smith ‘outed’ himself in an article as a lover of the works of Lamb:

Others we admire and extol, him we love … one of the last things I did before quitting England for Australia, fifty years ago, was to go down to Edmonton church-yard and pluck a few daisies and blades of grass from the grave which held the remains of Charles and Mary Lamb.

Lamb’s career and writing was a kind of informal template for Smith’s career. His interest in autobiography, in the theatre, in literary fellowship, and in old books and book collecting were shaped by the precedent of Lamb. Insofar as Smith shaped the culture of contemporary Melbourne, Charles Lamb can be said to be an unacknowledged influence on the character of that sociable literary city.

Lamb’s literary persona and his collaborations with his sister Mary also made his writing accessible to women. In the late 1870s, Martha Turner (1839–1915) lectured on Charles Lamb in Melbourne, Hobart and Launceston. Born in London, Turner moved to Melbourne in 1870 to visit her brother, a Unitarian minister, and later made a sensation by becoming the first woman preacher in the city. In her lectures on Lamb, reported in the newspapers, she stressed Lamb’s identity as a Londoner, and his writing as belonging to a ‘pre-scientific age’ when literature was ‘cultivated for love—before essayists had become moralists, and novelists public teachers’. As in the case of Smith, Lamb was a model and springboard for Turner’s career, giving her an opportunity to extend her voice.

Martha Turner, James Smith and other followers of Lamb can be found in the pages of Australian newspapers. The frequency of references to Charles and Mary Lamb, exceeding that of other Romantic writers such as Wordsworth, shows how familiar a figure he was to the ordinary Australian reader, ordinary meaning anyone who could afford the price of a newspaper or could share one. Lamb was seen as more accessible and less intimidating than other writers in the English literary canon. As ‘F. W. B.’, writing in The Age in 1950 commented:

Charles Lamb is a member of our own domestic circle. He is one of our intimate cronies. If we found ourselves at a dinner at which Dr. Johnson, Thomas Carlyle, Alfred Tennyson and a number of similar celebrities, were among the guests, we should be terrified ... But if a kindly fate seated us next to Charles Lamb, we should be perfectly at our ease from the first handshake. 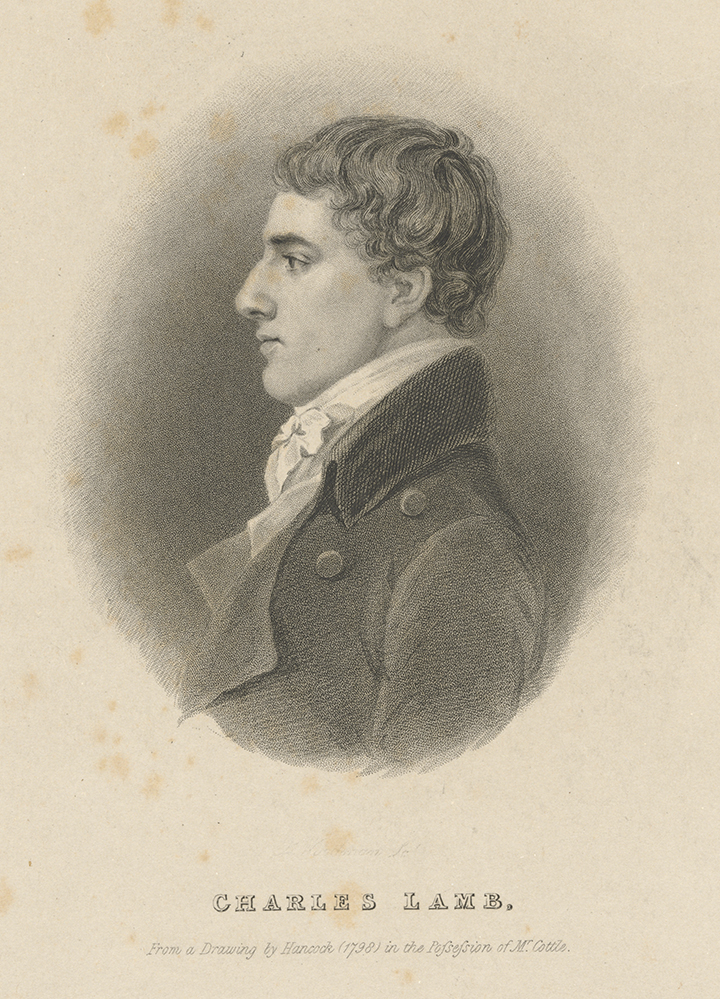 Charles and Mary Lamb have lost their place in Australian cultural consciousness. The reading public did not fall out of love with Lamb, but merely moved on and forgot about him. Nevertheless, a Lamb revival may be on the cards. His work and style can be seen to anticipate the internet, blogging and the micro-sociability of social media. The essay form is becoming fashionable again and Lamb’s love of books and reading, the subject of many of his essays, is chiming with both academic book history and the fascination with books as objects of affection and creators of bonds between people. While Charles Lamb will never be as prominent again in Australian culture, every time we go to a bookshop, talk about books, or lend our most precious volume to a friend, we are unconsciously following his example and his influence in shaping what it means to be a reader in Australia today.

Gillian Russell is a professor of eighteenth-century literature at the University of York. In 2018, Gillian was a National Library of Australia Fellow, supported by the Ray Mathew and Eva Kollsman Trust for Research in Australian Literature.