John Hunter, the second governor of the new Colony of New South Wales, sat on the banks of Yarramundi Lagoon, just north of Sydney, watching as an Eora man stood poised, ready to spear an amphibious animal that he had noticed rising to the surface to breathe, ‘blowing like a turtle’. An hour later, the animal was secured. It struggled mightily and had to be wedged between two slabs of bread while the barbs of the short spear were cut off. Immediately, Hunter noted that it had the body of a mole but, instead of a mouth, the bill of a duck.

The weather was hot, so only the skin could be preserved. Hunter, a naturalist, packed it in spirits with a wombat (from Flinders Island), as the Port Jackson people told him it was called, and shipped them off to the British scientific establishment to be named and classified. To give the gentlemen of the society an idea what the animal looked like in life, Hunter sent a sketch. 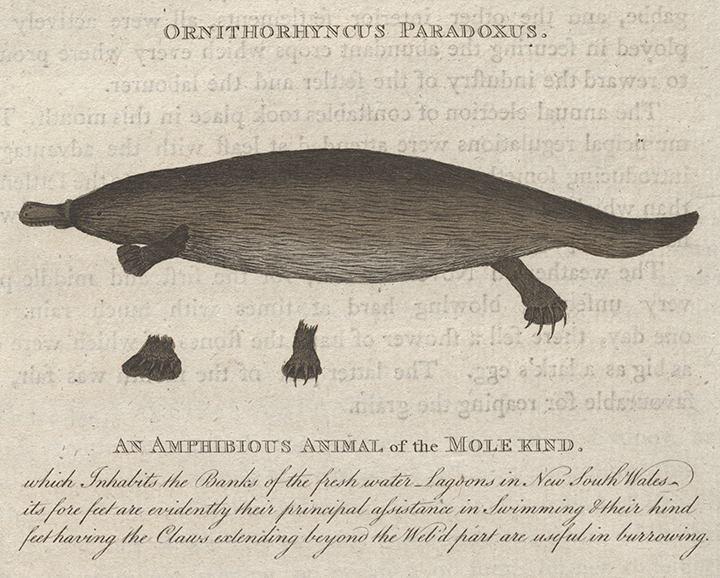 John Hunter, An Amphibious Animal of the Mole Kind, illustration in An Account of the English Colony in New South Wales by David Collins (London: T. Cadell; W. Davies, 1802), nla.cat-vn2323966

These discoveries for science were considered quite a prize for the men back in England and Europe who described and named the new species. It was November 1797, nearly a decade after Europeans first settled in Australia and, according to marine David Collins’s First Fleet narrative, ‘little had been added to the stock of natural history which had been acquired in the first year or two of its infancy’. The animals known at the time had been shot or were casualties of the tree felling that accompanied settlement, or they had been traded with the Sydney people, the Eora.

An Eora man named Wolarewarrè, initially kidnapped by Governor Phillip to assist with communication with the local people, was soon freely collaborating. To the British, he became known as Bennelong. The governor and his officers were keen to purchase any natural history specimens and cultural artefacts that were brought in. Such items were important to science, which was busy cataloguing and classifying the fauna and flora of the world. They also made novel gifts to send to the mother country and were a source of profit. As Hunter wrote, over dinner on the first day of October 1790, Bennelong and his friends:

sat down to dinner with Governor Phillip, and drank his wine and coffee as usual. The governor … endeavoured to make them understand that spears, lines, birds, or any thing they brought should always be purchased.

Hunter’s mole was, of course, the Platypus, whose peculiarities caused a sensation among the scientific community and vitally interested public back in England, and forever upturned the natural order of things. As Europeans ventured further and better communicated their interest in new animals, the Superb Lyrebird and Koala, and other uniquely Australia animals, soon followed the Platypus and wombat, revealed to European eyes by the local people. 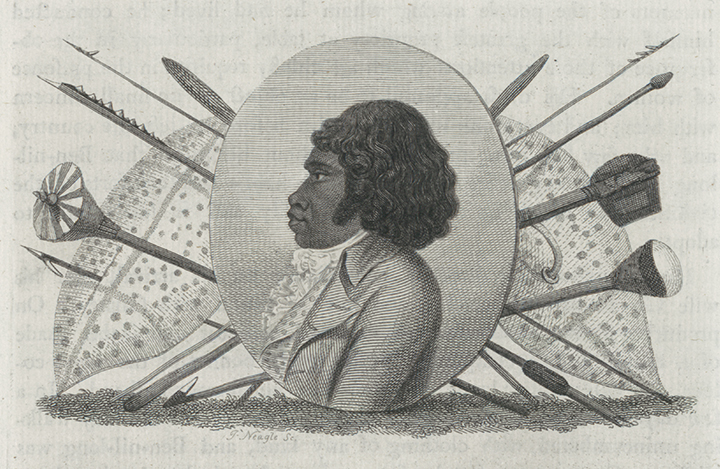 There are many such reports scattered and buried within the historical literature, much of it held in the collections of the National Library of Australia. Even though they are voiceless and often nameless, it is clear that Aboriginal and Torres Strait Islander people played a part in many of the significant moments in Australia’s zoological history—not just the European discovery of our animals but the unravelling of the mysteries of the monotremes and the lungfish. Well into the twentieth century, Indigenous Australians were helping to find rarities and animals feared extinct.

In collecting the larger, more obvious animals, the shotgun gave Europeans a distinct advantage, but the assistance of the Indigenous people was vital in uncovering most of the smaller, rarer or more cryptic animals, especially in more remote areas. Typically, men and boys accompanied expeditions but, when Indigenous camps were involved, women and children became major contributors, eagerly exchanging wildlife for tobacco, alcohol, food, clothes, blankets, trinkets and sweets. Thousands, if not millions, of animals were traded. 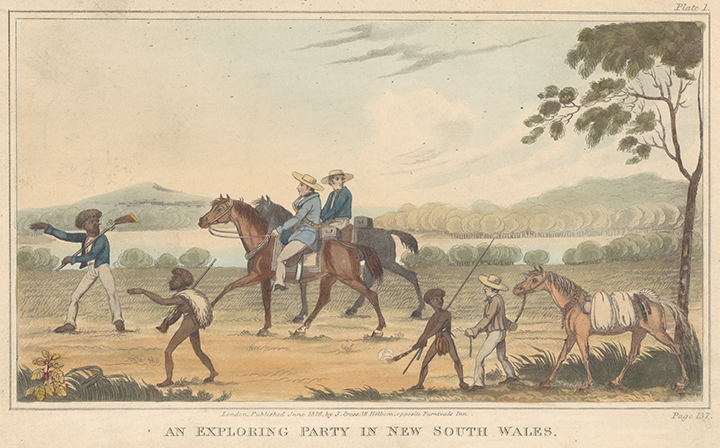 The Murray-Darling expedition of 1856 to 1857 is just one of the many such collecting trips. Victoria had recently been separated from New South Wales and the government-funded expedition to the junction of the two rivers was tasked with gathering specimens for the new Natural History Museum. Wilhelm Blandowski, the museum’s general zoologist, led the expedition, aided by naturalist-artist Gerard Krefft. Nearing the junction, they set up base camp beside the Murray River, at Mondellimin. The name is a corruption of the local Nyeri Nyeri community’s term for what is now known as Chaffey Landing, near Merbein in north-west Victoria. It refers to Mondellunddellun, the Fat-tailed Dunnart, a fierce little marsupial carnivore.

By November 1857, after just months, with the eager assistance of a clan of the Nyeri Nyeri, the expedition had amassed over 17,000 specimens of mammals, birds, reptile, amphibians, fish, insects, crustacean and molluscs. There were many small items, and repeats, but several species, notably of fish, were new to science. 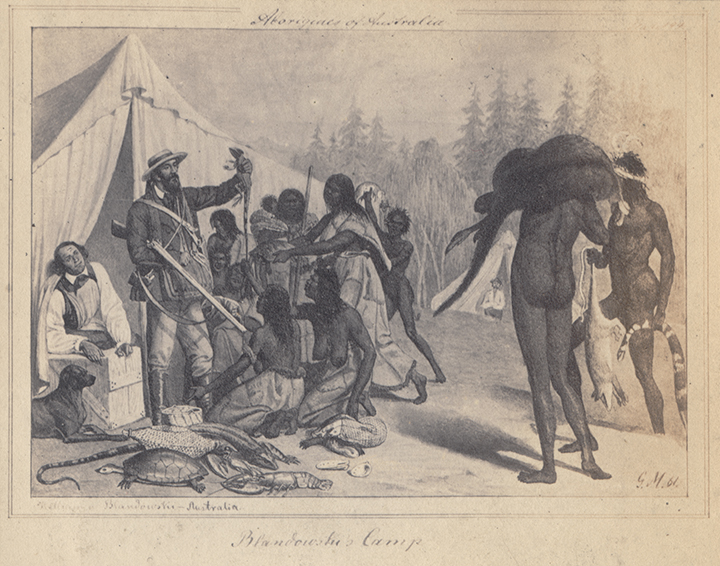 Both Blandowski and Krefft acknowledged their dependence on the community’s help. In his paper on the expedition findings, Blandowski wrote: ‘the specimens obtained by the assistance of the aborigines, to whom I am indebted for all the information and discoveries I have made’. This was probably an overstatement. Blandowski had fallen out with Krefft and other expedition members, so it may have been an attempt to minimise their contribution. Nonetheless, Krefft would not have disagreed that the Nyeri Nyeri had ensured the success of the expedition. Indeed Krefft, who had to process the specimens, complained about the number of common animals brought in. Only the bat fauna went largely untouched because of Nyeri Nyeri taboos. The whole community contributed, as Krefft noted:

the boys would go out to collect insects, the women to look for small mammals, and the men looking for the larger game; they would do their best to please, and obtain the reward offered for some rare creatures.

Through the efforts of Blandowski, Krefft and the Nyeri Nyeri, we have the sad knowledge of what has been lost. Of the 34 mammal species and subspecies that they collected, ten are now extinct, nine no longer occur in the region, four are still present but greatly reduced and only 11 are in healthy numbers. The expedition had occurred in the nick of time; within a decade the animals began disappearing. The extinct species include the Pig-footed Bandicoot, Eastern Hare Wallaby, Crescent Nailtail Wallaby, Lesser Stick-nest Rat and Gould’s Mouse; the last was never collected again anywhere. 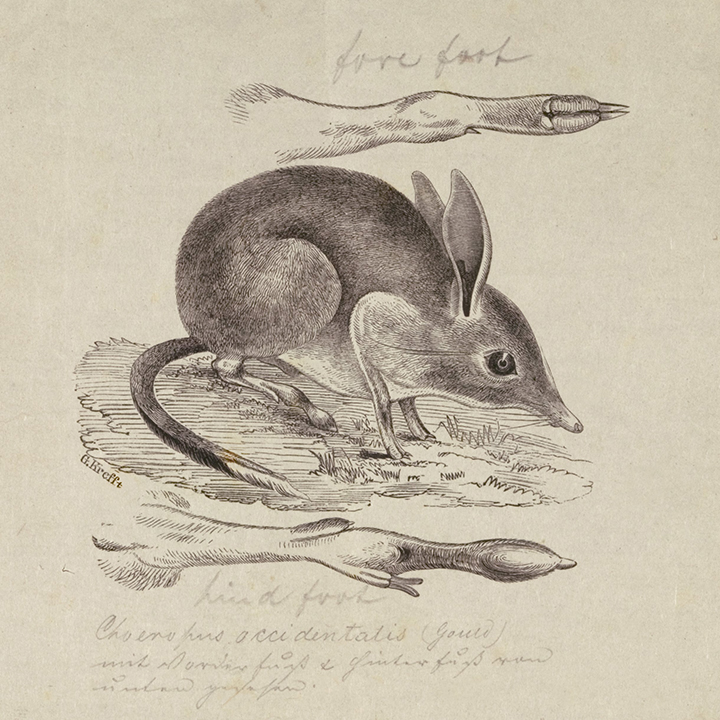 Both Blandowski and Krefft were aware that they were witnessing a disappearing world, not only regarding the wildlife. British squatters, with their hard-footed livestock, had taken up most of the fertile land south of the Murray River. Only a decade after the expedition, Krefft observed that many of the Aboriginal people on the Murray, ‘then in the prime of life’, had since disappeared.

As was typical, Blandowski and Krefft identified very few of the Nyeri Nyeri; Jimmy Bigfoot, Billy Booby and Sergeant were exceptions. Yet, some of the greatest collectors formed warm relationships with their Indigenous companions. These partnerships include George Caley and Moowattin around Sydney (1800–1810), John Gould and Natty on the Liverpool Plains (1839–1840) and John McGillivray and Neinmal around Port Essington (1844–1845). Others, like Blandowski, employed whole communities. Examples include Walter Baldwin Spencer and Frank Gillen, who were assisted by various groups of Arrernte around Alice Springs, and Scottish scientist William Caldwell with his team of some 150 Burnett River people, whose shocking tally of between 1,300 and 1,400 echidnas over a two-month period proved once and for all that monotremes were egg-layers. 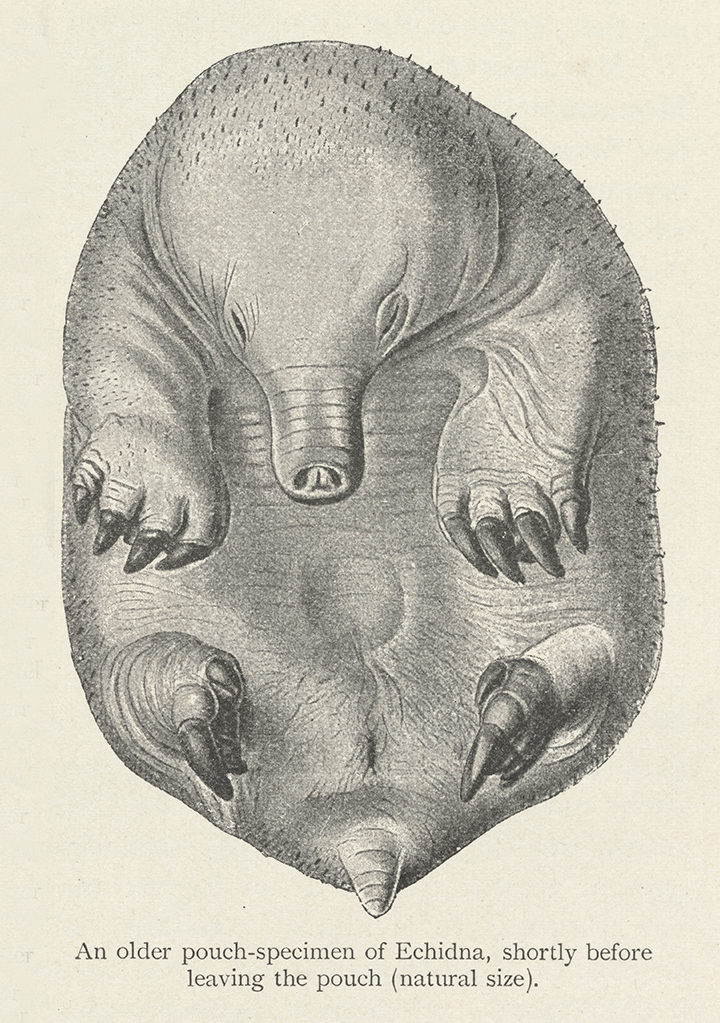 An Older Pouch-Specimen of Echidna, Shortly before Leaving the Pouch, illustration in In the Australian Bush and on the Coast of the Coral Sea by Richard Semon (London: Macmillan, 1899), nla.cat-vn2612182

In 1939, geologist Cecil Madigan crossed the Simpson Desert, one of the first Europeans to do so. With the considerable help of Andy, a Dieri tracker, he collected animals along the way. Although the language is outdated, Madigan best captured the necessity of Indigenous help:

I knew the value of natives on trips such as these, real bush natives who know the habits of all the bush creatures and can track and catch them. They are of the greatest help to the biologist and botanist in collecting … A good bush native can be more valuable than any other member of such an expedition.

It is clear that the blazing of zoological trails must be added to the many significant contributions made by the Indigenous people to the development of Australia since settlement, and to the early advancement of the science of natural history.

Dr Penny Olsen is research scientist and honorary professor in the Division of Ecology and Evolution at the Australian National University. She has written extensively on Australian natural history and its practitioners. Her latest book, Australia’s First Naturalists: Indigenous Peoples’ Contribution to Early Zoology, was written with Lynette Russell and published by NLA Publishing in May 2019.