Letters are all that I have to live for now

It was Christmas 1917. No end to the Great War was in sight and Australian soldier Aldred Baldry was writing home to his wife Annie. Much anticipated, treasured and reread, their letters are intimate, affirming, conversational and reflective and, as Aldred said, ‘helped bridge the great divide’.

Annie’s letters paint a picture of a life set to the rhythms and rituals of country life at Wallandoon, New South Wales: seasonal changes, weather and rainfall patterns, and livestock and crop management.  The leaves and sprigs she encloses bring Aldred ‘a breath of home and all that is dear to me’. 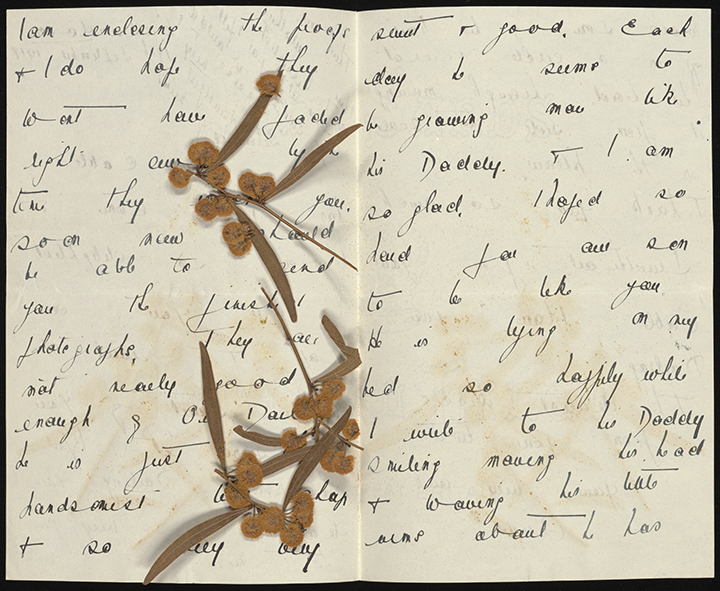 Soon after Aldred leaves, she writes to confirm a much hoped for pregnancy. Her life and letters increasingly revolve around her progress and baby Kenneth’s birth, his christening and his daily activities. She talks about Evelyn, an Aboriginal girl employed to help with Kenneth, Evelyn’s devotion to the baby and her decision to ‘give’ Evelyn Kenneth’s birthday as her own. She reinforces Aldred’s existence by having Kenneth kiss his photograph goodnight.

Annie appears shielded by her family from war news including, for a while, of her husband’s deployment to the front. The war, though, casts an ever-present shadow. Casualty lists, including names of people known to the family, starkly reinforce the realities of war. Writing condolence notes becomes a frequent activity, as evidenced by the black-rimmed acknowledgements that appear alongside the Baldry letters in the collection. The damage wrought by war is seen in the faces, bodies and minds of returning soldiers; some, including one suffering shell shock, are staying as house guests. Annie’s mother bears the brunt of the property management, made increasingly difficult by shortages of labour. Rationing hits home. The family is heavily involved in community war support activities, particularly with the Red Cross.

Annie’s opinions reflect broader societal divisions. She resents strike action and is unequivocal on able men enlisting: she ‘couldn’t marry a man who stayed at home’.  A strong supporter of conscription, Annie deplores the failure of the 1917 referendum, reinforced by Aldred’s position that, although soldiers’ views varied, it left ‘a bad thought in the mind of the people here that we of Australia are not loyal and true to the Empire … we feel certainly belittled’.

Aldred’s war story evolves through his letters. His ‘debut under fire’ comes in September 1917 at the Battle of Polygon Wood. Before heading out to the frontline, he writes that his confidence is ‘made ever so strong because I know you are thinking of me’, but takes care to record ‘be sure and always be happy and tell our little son that his daddy loves him just terribly’. While successful, the Allies incur huge casualties. Promoted in the field to 1st Lieutenant, Aldred witnesses both the heroic and the unforgettably horrendous. He encounters his own mortality: ‘many times I was brought to the stage of asking forgiveness and the future care of my two loved ones before passing over to a far better world’. 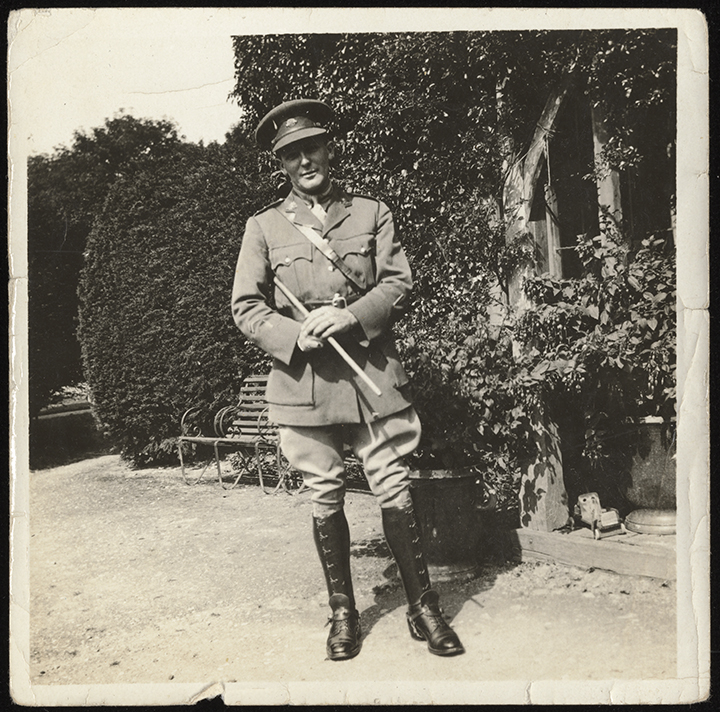 From late 1917, Aldred is seconded to a series of Australian Army Corps Schools as an instructor, interspersed with training and leave in England. Located back from the line, these moveable schools trained officers and other ranks in weaponry, intelligence, signalling and other skills; in leadership; and in evolving battle strategies including, critically, coordinated arms tactics. They also provided intensive sports program and important respite to men from the frontline.

The war’s shifting fortunes are reflected in Aldred’s outlook. By the end of 1917, his early optimism of a speedy victory has evaporated, replaced by feelings of life ‘lived merely as an existence’, dominated by the incessant cold and mud (‘our own worst enemy’); the shrieking of shells; the relentless attrition of men; and the deadening monotony of it all. The year 1918 starts with the outcome still in the balance but, buoyed by the prospect of a growing American presence and progressively better battle news, by May he is having ‘the most optimistic spasms’.

Pride in the Australians’ performance is a strong driver, with Aldred revelling in their growing reputation and their strong esprit de corps and fellowship. Acknowledging that they ‘are rightly dubbed the undisciplined army’, ‘not angels … nor do they wish to be’, he stresses that ‘it is proved beyond doubt that the discipline of our troops is OK when the time comes’.

Aldred draws strength from his conviction of the Allies’ moral right and ‘a deep hatred’ of the Germans, fuelled by reports of their treatment of prisoners-of-war; ‘their wanton crimes and destruction’; and seeing the French people’s plight as their homes and livelihoods are destroyed. His religious belief strengthens, giving him solace and helping him to come to terms with killing, which he believes will be ‘foregiven at the day of reckoning’.

Letters ‘are the only real ray of sunshine’, although they ‘bring home all that I am missing’. On receiving his baby’s first photos, he writes: ‘looking at my own little son in wet and cold trenches made it almost heaven and you don’t know how much it cheered me’. The everydayness of Annie’s letters enables him to ‘enter into it as if I am actually there’. Care packages of food, tobacco, clothes and journals are a comfort and reminder of home. With fellow officers, he celebrates his baby’s christening and first birthday with Annie’s cakes. 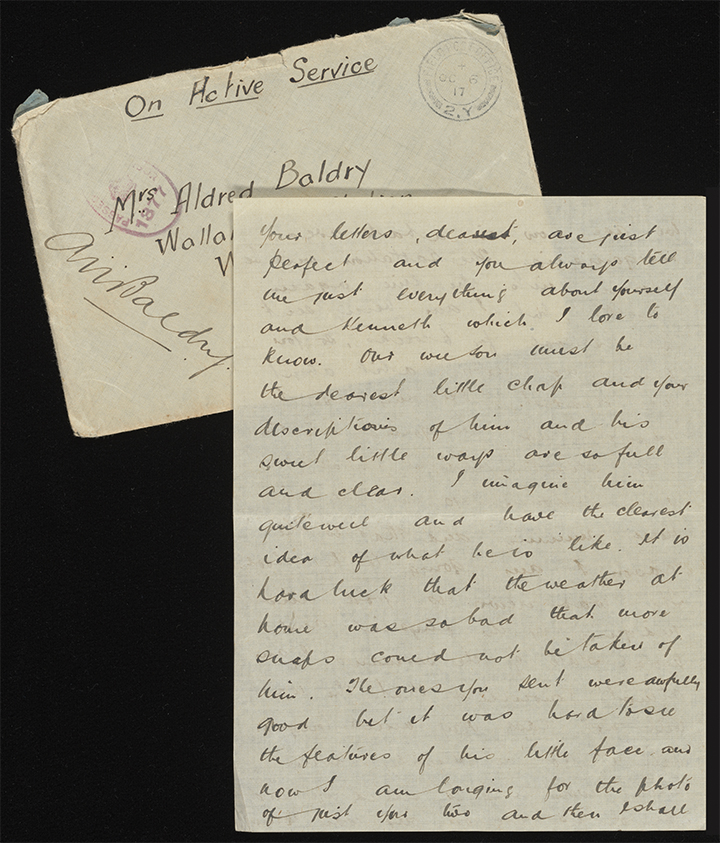 The bleakness is tempered by the Australians’ distinctive sense of humour, without which they would be ‘a miserable lot’. Examples pepper his letters: the banter and joking making long marches seem much shorter; men imitating sheep, baa-ing as they board horseboxes transporting them to the front; and officers on active service each issued with a chamber-pot—a ‘real china po’—which they hurled and shattered with great ceremony.

After armistice, Aldred returns to his Battalion and, finally, in late April 1919, he is discharged and returns to Wallandoon to be reunited with his beloved Annie and meet his 22-month-old son. 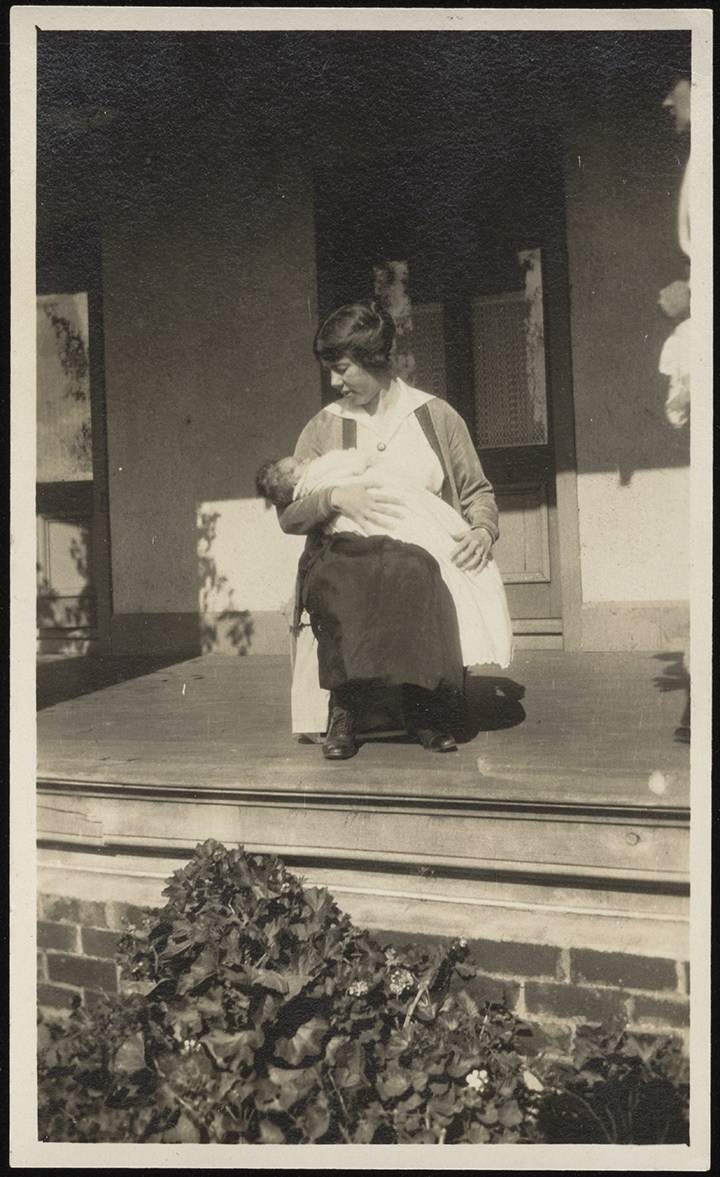 The futility of war strikes him as he reflects on the ‘good pals who have given their lives’ and wonders:

what avail has it been to anyone!! … There will be no more wars for a long time … The sadness it has brought has indeed taught the world that there are other means than killing one another like flies

In a poignant postscript to Annie and Aldred’s story, their son Kenneth was killed in England in a flight crash in the Second World War.

Lynne Sumsion is a National Library volunteer, with a keen interest in research and writing on social history. She had an extensive career in the Australian Public Service (as Lynne Tacy) in the fields of workplace relations and public administration.