My scoundrelismic behavior is partly owing to the fact that it was Shake….speare who influenced me deeply at an early age … During adolescence read S. through cover to cover once a year with religioustic fervour. It’s too corny to say that, i.e. Shakespeare, isn’t it? Well you see my troubles. 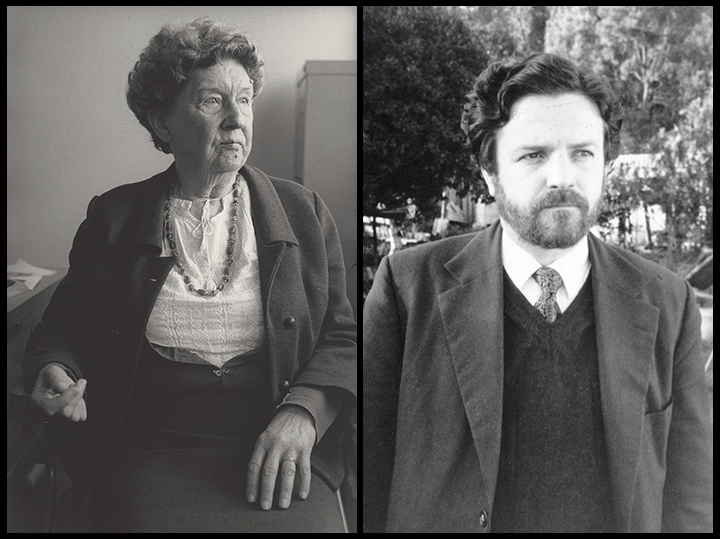 Acclaimed novelist Christina Stead used her typewriter like a sounding board. In her letters to Jim Hamilton, secretary of the Victorian branch of the Fellowship of Australian Writers, written from 1972 to 1979, the rich cadences of speech flowed into her correspondence as they did into her fiction.

The National Library recently acquired 28 of these letters, which confirm biographer Chris Williams’ judgement that ‘most of Christina’s valuable writing after [her husband’s] death is in the form of letters’. The correspondence reveals the author’s state of mind as she struggled to overcome writer’s block, cope with the loneliness of widowhood and adjust to life and celebrity back in Australia.

Writing to Hamilton from London on 11 February 1972, Stead declared a need for someone ‘really in touch with Australian publishing (or anything else Australian)’, ‘a paratrooper’. She found dealing with publishers bothersome and wanted him to place her stories where he thought best.

Alone in her dingy flat in Surbiton during the northern winter of 1972–1973, the ageing writer was greedy for human contact—‘very dreary months … no place for lovely people like you in such cloudiness’—and jealous of Hamilton’s busy life:

You are doing too much work, of course, like all good people … Instead of getting on to my MS. as soon as I get up, I make some tea and start to answer the letters … Perhaps, I say, I’ll finish my book. The usual sapheaded remark.

Having produced no new novel for six years, she relied on an aged pension to supplement her modest income: ‘I’m not complaining. If I can eat and buy typewriter ribbons, I don’t care for money’. Although her finances would soon improve with earnings from resurrected and reissued work, the ‘MS’ she refers to—a novel she had been working on since the 1940s—would not appear until after her death (I’m Dying Laughing).

Eager to create again, Stead pushed back against the critical acclaim for long-past works, especially The Man Who Loved Children (1940). The way her writings were being appropriated by some for the 'cause of women's rights' also annoyed her:

This comment, from the same letter, led to a description of another kind of visceral reaction:

While ‘dreaming’ of her return to Australia, she fretted about a loss of inspiration: ‘I’m so shabby in mind, fagged out’. A major essay on Virginia Woolf, researched in depth, lay stillborn, and the ‘MS’ was moribund:

I am doing absolutely nothing. I had a sort of breakdown (no anguish, no fits, no signs, but I could not do any work) but I am hoping soon to get going again. But on something new. We had a weak slow misty spring though the trees and plants and grass—all rich and fine; and it is still mild, cool—nevertheless I am feeling more vigorous. I am really ashamed I couldn’t finish the big novel (but it was broken up and rewritten too much, I couldn’t face it any more); a pity, really. I have also been cut off too much—for output you really need intake, a brilliant discovery I made for myself only last week.

By mid-1975, Stead was living back in Australia, and Hamilton was after a new story for The Sun. Stead suggested one she called ‘The Talking Ghost’ (published posthumously as ‘My Friend, Lafe Tilly’):

I don’t think, after all the scolding (of me by her) that she, my agent, has sold that story in NY. It is (believe it or not, in my opinion) too sophisticated for them. They don’t understand (maybe someone will though) that I am writing in Casanova terms or Rétivien terms (Rétif de la Bretonne); that can accept the most miserable coarseness (like Portnoy’s Complaint, too stupid for words) but not the open world of sex (as I see it at any rate.) My story is far from coarse; it has delicacy and even one beautiful moment. (I’m soapboxing—no good.)

But the story needed more work and was never delivered. In December, her excuse was that she was staying in Canberra with a friend, the literary critic Dorothy Green, and had no manuscripts to hand:

I have a lot of MSS in Sydney, here nothing—not that that matters; for I am much better off away from that atrocious noise (jets flying right overhead as they down to the airport). I have started on a long term idea, but have written no shorts and as you see cannot dig up suitable material from my files right now. Very sorry, Jim.  I have spent a day or two fancying around thinking whether I can dash off something, but don’t see anything suitable. 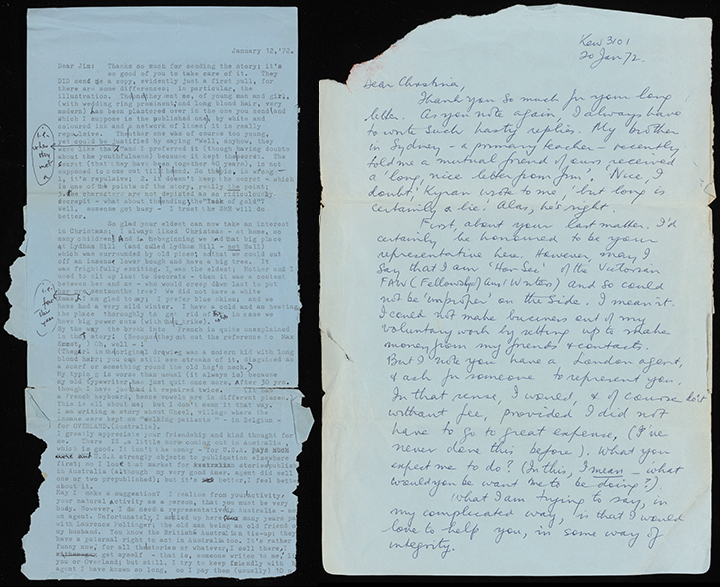 The following April, Stead accepted an invitation from Monash University. During the visit, she was guest of honour at a dinner party at Hamilton’s home in Kew. They got on famously together, Jim’s wife Eileen recalled. Her next stop was the University of Newcastle: ‘I am looking forward to Newcastle; perhaps something wonderful will happen to me—I will become human again and start writing?’

It wasn’t to be. The ‘religioustic fervour’ that propels so many of Stead’s fictional heroines through life had dimmed in their creator, and she would not see anything new into print before her death in 1983.

Walter Hamilton is a journalist of 45 years’ standing. He studied the works of Christina Stead for his BA (Hons.) at the University of Sydney. He is also the youngest brother of author Jim Hamilton, whose widow Eileen donated the new Stead letters to the Library.