Comets have fascinated, intrigued and even cast fear among the citizens of planet earth for several centuries. Every culture has its own stories, interpretations and depictions of comets that have graced their night sky for thousands of years. To the ancient Chinese they were known as broom stars, to the Tshi people of Zaire they were hair stars and to the Tongans they were stars of dust. Comets were also seen as harbingers of calamities, omens fortelling a disaster or the overthrow of kings. The Bayeux Tapestry shows the Comet of 1066 and the killing of King Harold of England by the Norman invaders. More than 500 years later, Shakespeare in Julius Caesar wrote: ‘When beggars die there are no comets seen; The heavens themselves blaze forth the death of princes’. Despite their superstitious beliefs about comets, the ancient Chinese observed and catalogued a remarkable number of these small celestial bodies. The excavation in the 1970s of Number Three Tomb at Mawangdui in China revealed illustrations of comets painted on silk. It was probably the first atlas of comets to give detailed information on such things as the date, type of comet and the constellation in which it appeared.

From about the seventeenth century, scientists began clearing the cobwebs of superstition that surrounded the appearance of comets and started answering the question of where they come from and what they are made of. A new breed of comet observers and hunters appeared on the scene. Famous physicists and astronomers, such as Kepler and Galileo, entered the debate about the nature and properties of comets. The Comet of 1618 was first observed on 25 August in Hungary. It was also observed by Johannes Kepler, who gave us the laws of the heavens, through his new telescope. In fact, it was probably the first comet to be observed in this way. Two other comets appeared in the same year and another shortly after, in 1619. They provided sufficient fodder for the scientists to argue about the nature of these newly arrived celestial bodies in the earth’s night sky.

It was, however, Edmond Halley (of Halley’s Comet fame) who gave us a first insight into the trajectories of comets. He showed us that they are members of our solar system. The appearance of three major comets in 1680, 1682 and 1683 fired his imagination and inspired him to calculate their orbits. In a most remarkable paper, A Synopsis of the Astronomy of Comets, he used Isaac Newton’s laws of universal gravitation to solve one of the great mysteries of science. From his calculations, he predicted that the comet seen in 1531, 1607 and 1682 would appear again in 1758. In order to provide an accurate time of arrival, French mathematician Alexis Clairaut and astronomer Joseph-Jérôme de Lalande refined Halley’s calculations. The comet was observed by Johann Palitzsch, a German farmer and avid comet hunter, as predicted by Halley on Christmas night in 1758—16 years after his death. It was a great triumph for Newton’s theory of universal gravitation and clinched the argument that comets could return and were part of our solar system. An answer to the question of a comet’s composition proved more elusive. It was only in 1950 that American astrophysicist Fred Whipple told us they were dirty snowballs made up of ices, dust and gasses. 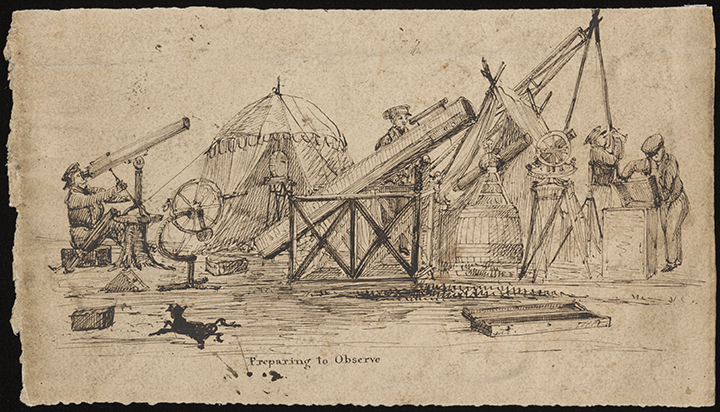 The prejudice against women scientists was glaringly obvious in this hunt for comets. There was a third member of Clairaut and Lalande’s team who worked on the calculations, but they did not mention her in public. Nicole-Reine Lepaute hailed from the upper classes and was an accomplished mathematician. In Lalande’s Astronomical Bibliography, he tells us that while she was vital to their work, she was not pretty. Caroline Herschel, the sister of the famous British astronomer John Herschel, fared much better. She found eight comets in all and was awarded the Royal Astronomical Society’s gold medal. She was a celebrity in her own right. In more recent times, American astronomer Carolyn Shoemaker has discovered 32 comets and is well known for her co-discovery of the Shoemaker-Levy 9 comet in 1993.

In 1986, Halley’s Comet once again appeared in the night sky and was met with a new breed of observers. Five highly sophisticated spacecraft—two Japanese (Sakigate and Suisei), two Soviet (Vega 1 and Vega 2) and the European Space Agency’s Giotto—studied the comet. Giotto was named after the Florentine painter who included his own observation in 1301 of Halley’s Comet as the Star of Bethlehem in his now famous painting the Adoration of the Magi. 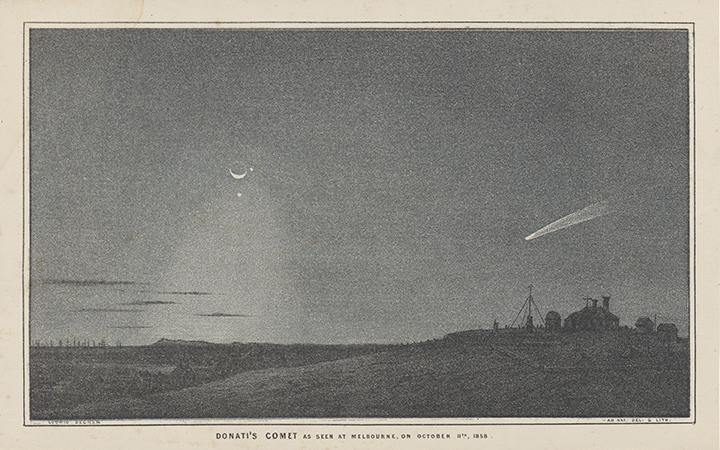 Australia entered the comet-hunting field with a big bang in international astronomical circles in the nineteenth century. On arriving in Sydney in 1821, Sir Thomas Brisbane, the sixth governor of New South Wales, established the first private observatory in Australia at Government House in Parramatta. With him, he brought two astronomers, Charles Rumker and John Dunlop. Within months of establishing the observatory, they discovered Encke’s Comet, a short-period comet. It was found on its first predicted return in June 1822. In an article on ‘Progress of the Mathematical Sciences’, the French scientist M. Fourier wrote:

the return of this star is an astronomical event of the greatest interest. Its faint splendour and crepuscular light did not allow it to be observed in Europe. Nor were they more fortunate at the Observatory of the Cape of Good Hope; but it was decried in the region of the earth the most remote from Europe—New Holland. The astronomer of the observatory at Parramatta, the most recent establishment of such a kind, observed this comet throughout the month of June 1822, and in positions very near those which had been anticipated.

This comet, which had been seen previously in 1818 by the astronomer J. Pons in the northern hemisphere, was named after astronomer Johann Franz Encke who had calculated its 3.3-year orbit. The rediscovery of Encke’s Comet was important because it was only the second time that the predicted return of a comet had been observed. The first, as noted earlier, had been Halley’s Comet. This observation made Encke’s Comet a permanent member of the solar system and confirmed that comets, like planets, obeyed Newton’s laws of gravitational motion.

This success on the international scene was followed several years later by Australia’s most famous nineteenth-century comet hunter, John Tebbutt, whose papers are held at the National Library. Tebbutt’s interest in comets began with his first naked-eye observation of a comet in May 1853. His next was Comet Donati, which had been discovered by the Italian astronomer Giovanni Donati in Florence on 2 June 1858. He beat the professional astronomers in the state observatories to it. Tebbutt shot to international fame with the discovery of the Great Comet of 1861. He wrote in his memoirs that this discovery ‘made him known to the astronomers of the northern hemisphere’. His next great discovery and international exposure took place in 1881. In her monumental work on the history of nineteenth-century astronomy, Agnes Clerke wrote that ‘the comet of 1881 was of signal service to science … Cometary photography came to its earliest fruition with it’. For his extraordinary work, Tebbutt was awarded the Hannah Jackson (nee Gwilt) Gift and the Bronze Medal of the Royal Astronomical Society in 1905. In 1973, the International Astronomical Union renamed the lunar crater Picard G ‘Tebbutt’. In 1984, Tebbutt and his observatories were depicted on the Australian $100 note.

Back of the $100 Banknote, Showing John Tebbutt, first issued 1984, Reserve Bank of Australia

Apart from Tebbutt, Australia has had and continues to have a number of comet hunters who have discovered new comets. Hunting comets is a hobby that can be carried out by anyone who has the patience to search the night sky for fuzzy objects several hours a week. One does not need to use highly sophisticated or very large telescopes. The late Bill Bradfield, a rocket-propulsion engineer from South Australia, was one of these amateur astronomers who had cobbled together a homemade telescope and had begun his search for comets in 1970. Six years later, he had discovered six comets. By the time of his death at the age of 86, he had discovered 18. What is remarkable is that he relied on sweeping the sky visually rather than using sophisticated computerised equipment. Roger Sinnott, a senior contributing editor with the US Sky & Telescope magazine, noted that ‘His remarkable tally of 18 comets, each discovered visually and credited to him alone, puts him among the most prolific and elite comet discoverers of all time’.

Living in the twenty-first century has given us a different perspective of our universe. Comets no longer hold superstitions for us, nor are they omens of bad tidings. They are just dirty snowballs that obey the laws of universal gravitation and come along and greet us from time to time with their magnificent long tails.

Dr Ragbir Bhathal is a Distinguished Teaching Fellow at Western Sydney University. He conducts the National Oral History Project on Eminent Australian Astronomers and Physicists on behalf of the Library and has published four books with NLA Publishing.