Curator Matthew Jones looks at one of the treasures in the Library’s latest exhibition, Dombrovskis: Journeys into the Wild 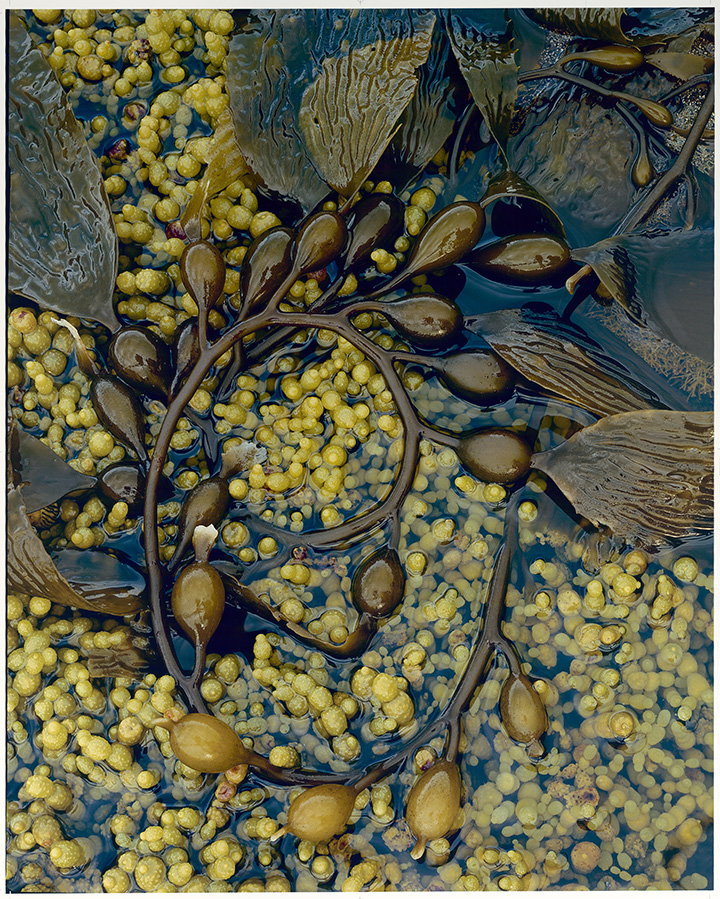 According to the internet, eating seaweed is very good for you. Among its many superpowers is the ability to improve your memory. The first image in the National Library exhibition Dombrovskis: Journeys into the Wild is of seaweed, Macrocystis and Hormosira Seaweed to be specific. As curator of the exhibition, I didn’t choose this image because of seaweed’s superfood moment. It was chosen because it is beautiful, and close consideration of it can lead to musings about the role of Dombrovskis’ art, particularly the value of not forgetting.

The Tasmanian photographer Peter Dombrovskis is known for his spectacular photographs of the mountains, rivers and forests of Tasmania. His Morning Mist, Rock Island Bend, Franklin River played an important role in the successful campaign to prevent the Tasmanian Hydro Electric Commission damming the Gordon and Franklin rivers in the early 1980s. However, he is also known for taking intimate, close-up details of natural elements. In many of these works, the thing being depicted becomes a departure point for an exploration of form, pattern, shape and colour. They can also reveal worlds in the smallest detail. Macrocystis and Hormosira Seaweed is such a photograph. The spiral of the seaweed is reminiscent of the swirl of the Milky Way, bringing to mind the vast, eternal, incomprehensible universe.

The seaweed also contains another mystery for those who look hard enough: a reflection of the creator of the photograph. The kelp (Macrocystis) and the Neptune’s necklace (Hormosira) featured in the photograph both have gas-filled bladders (pneumatocysts) that keep them afloat and allow the seaweed to receive sun for photosynthesis. If you look closely at the kelp pneumatocysts, you can just see the reflection of a man, Dombrovskis himself, crouching next to a tripod. It is a rare self-portrait of sorts, probably an accidental one. In fact, people and animals—and any trace of their existence—rarely feature in Dombrovskis’ photos. Landscape painters and photographers often use staffage (human figures and animals that are not the main subject of the work) to give a sense of the size and scope of what is being depicted. They can also date a work; anchor a timeless landscape to a particular moment in history. The absence of these devices in Dombrovskis’ work makes the landscapes seem permanent and enduring. They are outside of time.

So was his presence in the photo a deliberate manoeuvre by Dombrovskis? A Brechtian ploy to anchor one of his photographs to a precise historical moment and therefore draw attention to the artifice of his art? Or was it just an accident? Either way, its difference does make us stop and again consider the value of his work and the role of its maker. Within the part of the kelp that keeps it afloat and allows it to survive is the ghostly shadow of the man, and his tools, who did more than anyone to remind us that these plants and landscapes are here, and are worth protecting. I guess the internet was right—seaweed is good for the memory. And so is the work of Peter Dombrovskis.

Matthew Jones is the curator of Dombrovskis: Journeys into the Wild, on display at the Library until 30 January 2018.