Hidden Between the Pages 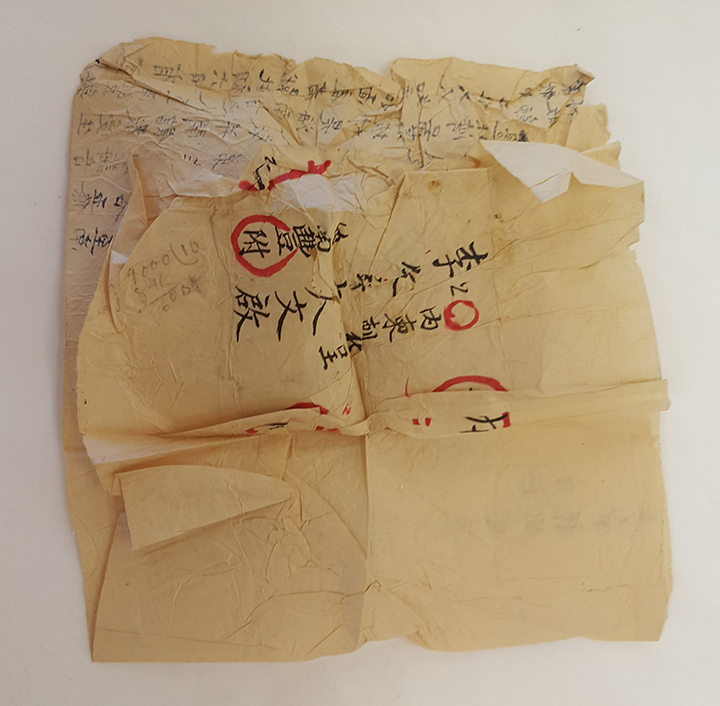 Last year, National Library Fellow Dr Sue Chen found a very fragile Chinese document, along with several other loose and damaged pages, within the National Library’s manuscripts collection. Scrunched up and torn, it was hidden between the pages of a bound volume from 1898: Journal of Itineration by Reverend Jasper McIlvaine. Sue's fellowship research focused on Chinese children's literature—a genre that was introduced to China by Christian missionaries. Unfortunately, the documents were unreadable due to their condition. The volume and its loose pages were taken to the preservation lab for treatment that would allow Dr Chen to take a closer look without causing any damage.

To open out the paper and make it easily readable, we conservators needed to carefully and gently humidify the paper by introducing a very fine mist of moisture into the paper support to relax the fibres. Before this could occur, the various inks on the paper were assessed and tested for water solubility. At this point, we found the red ink to be incredibly soluble (as seen below, where the ink had previously met a droplet of moisture), making any aqueous treatment—including humidification—a potentially risky task. 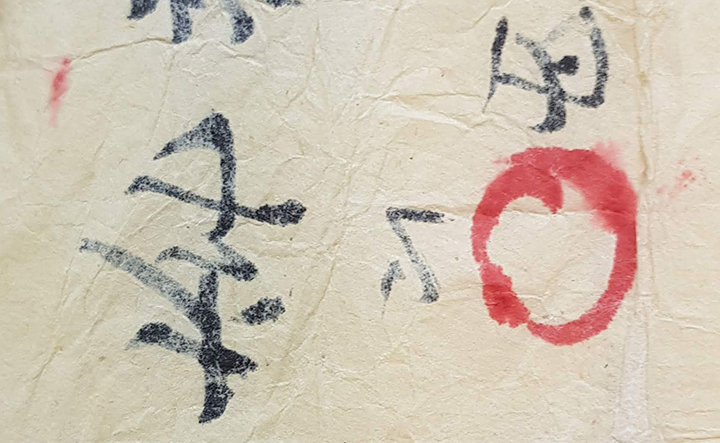 With further testing, weidentified that the media could withstand a low and gentle overall application of moisture without causing ink movement, therefore the item was placed into a monitored Gore-Tex humidification chamber. The pores of the Gore-Tex membrane are too small for water droplets to pass through, but do allow through vapour, which interacts with paper yet has a low risk of causing ink to run. Humidity in the chamber only needed to be high enough for the paper fibres to relax, allowing the paper to ‘unscrunch’ without damaging the paper or risking movement of the red ink. 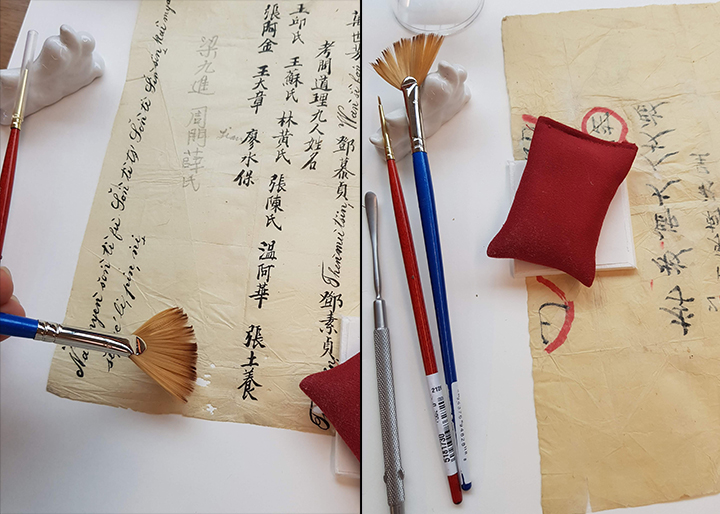 Left: Local application and flattening of creases using a fan brush with conservation-grade solution and pillow weights; Right: During treatment, a pillow weight and Holytex blotter are used to flatten creases after humidification 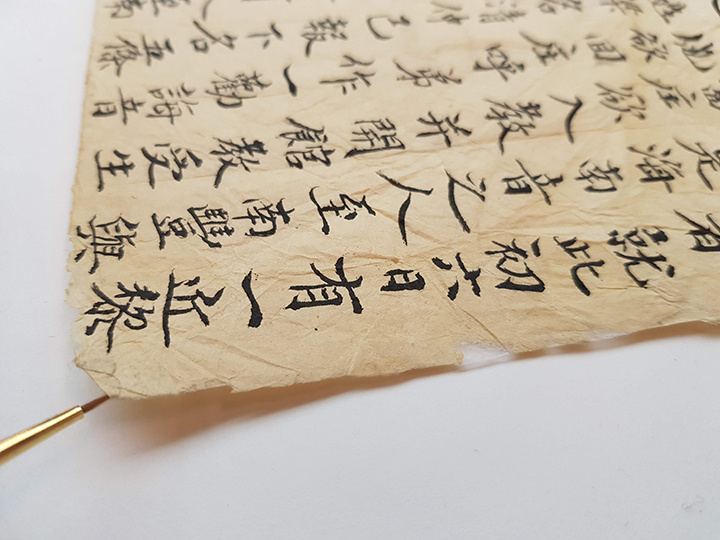 Once we could safely open the letter, we reduced the remaining creases and folds locally by carefully brushing the paper with a quickly evaporating solvent, being careful to avoid the red media. We then gently flattened the document under weights while the fibres were relaxed, until finally the document was stable enough that the tears could be repaired using handmade Japanese tissue paper.

After some discussion, it was decided that the items should not be separated from the book and were refolded along the established fold lines to sit within their original pages of the journal. This avoids dissociation of the items from the journal, maintaining context and provenance. This beautiful letter and several others are back in their original locations within the book, ready for anyone to see. 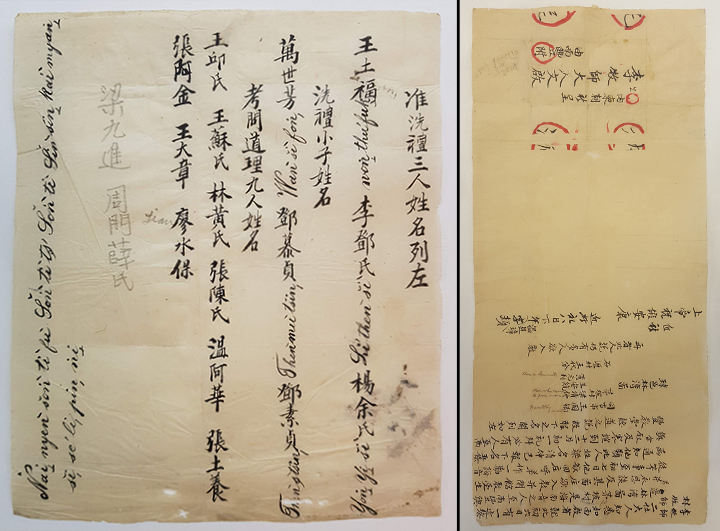 It was fortunate that Dr Chen identified the significance of the damaged object. Two documents within this volume, found in the same opening, are historically important and relatively rare. The smaller document (above left) contains the names of three adults and three children who were approved for baptism. The larger document (above right) is a letter addressed to two priests listing the names of five Chinese men from three different villages expressing their interest in joining the church and building a church in their village.

The letter is an unusual survivor relating to the Christianity in China in the late nineteenth and twentieth centuries written in Chinese, something not seen by Dr Chen before. Historian Joseph Tse-Hei Lee, who has done extensive research on Baptist and Presbyterian Chinese Christians in South China, has found that most of the existing records of Chinese people who were baptised are rendered in English Romanisation, rather than Chinese characters. If this is the case, these two documents are rare findings. As seen in the photographs, one of the documents also includes the English Romanisation. Unfortunately, as there is no exact year within the letters, it is hard to predict how old they are and this may have a bearing on their rarity.

Left: Treated documents placed neatly in their original locations in a bound volume; Right: Journal of Itineration in its box

Following treatment, the item was returned to Dr. Chen in the special collections reading room, where she could then access the flattened and stabilised paper along with a few others within the pages—another happy reader!

Freya Merrell is a conservator at the National Library of Australia.

All photographs in this article were taken by Freya Merrell in 2017.