These overseas ‘enemy aliens’ were from various parts of the world, such as the United Kingdom itself, Palestine, Iran, the Straits Settlements, New Guinea, New Caledonia, the New Hebrides, the Solomon Islands and Tonga. In Australia, they were interned with German, Italian or Japanese nationals. In addition, at the request of the Dutch East Indies Government, Indonesian civilians were detained in Australia. 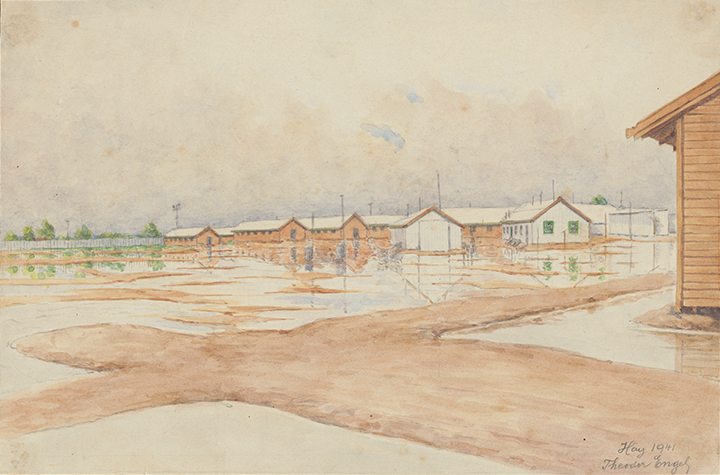 One of the most unusual groups to be interned from overseas comprised Templers (not to be confused with the Knights Templar) from Palestine. They trace their origins to the founding in Germany in 1861 of the Temple Society, which in its efforts to revive Christian faith encountered opposition from the mainstream Protestant Church. Members of the Temple Society created what they regarded as communities of God’s people in the Holy Land. When Rommel’s Afrika Korps pushed its way eastward across the Libyan desert towards Egypt and the Suez Canal in mid-1941, security concerns dictated that Germans and a smaller number of Italians be removed from Palestine altogether. Most of the Germans were Templers, and British authorities were keenly aware of their strong allegiances to Germany. They were gathered together and transported to Egypt under Palestinian escort. They had no inkling that their final destination would be Australia. One of the women, Gerda Kazenwandel, later recalled:

At the end of July 1941 buses picked up families from the various Temple Society settlements and our men from Camp 13 at Jaffa. In Lydda we boarded a train and travelled south through the desert to Kantara …

We went south to Ismalia and further on to Suez, travelling all day without food or water, in really hot summer heat. Our train was shunted outside Suez, and out in the open we were fed with a handful of mashed potato in one palm and a sausage in the other. We slept on the train and next morning walked what seemed like miles with our packs on our backs and leading the children by the hand in the heat to meet a cargo ferry. We were pressed to load the ferry in a hurry and the vessel put out into the Red Sea.

We were placed on a small boat, without our luggage, it was just sea as far as we could see, there was no sign of land or ship ahead. We thought we were being taken out to be drowned.

In fact, they were part of a contingent of 665 Germans and 165 Italians who were being taken to the ocean liner Queen Elizabeth, which had just brought troops from Australia to the war in the Middle East. On board, also, were German POWs, members of Rommel’s Afrika Korps. Like the Templers, they were destined for several years behind barbed wire in Australia.

The Queen Elizabeth at least offered a modicum of comfort on the long voyage to the Antipodes. The same cannot be said of those aboard the troopship Dunera the previous year. Collectively the men aboard the Dunera are often referred to as ‘the Dunera Boys’, and they provide one of the most remarkable and often celebrated stories of wartime internment in Australia in the Second World War. 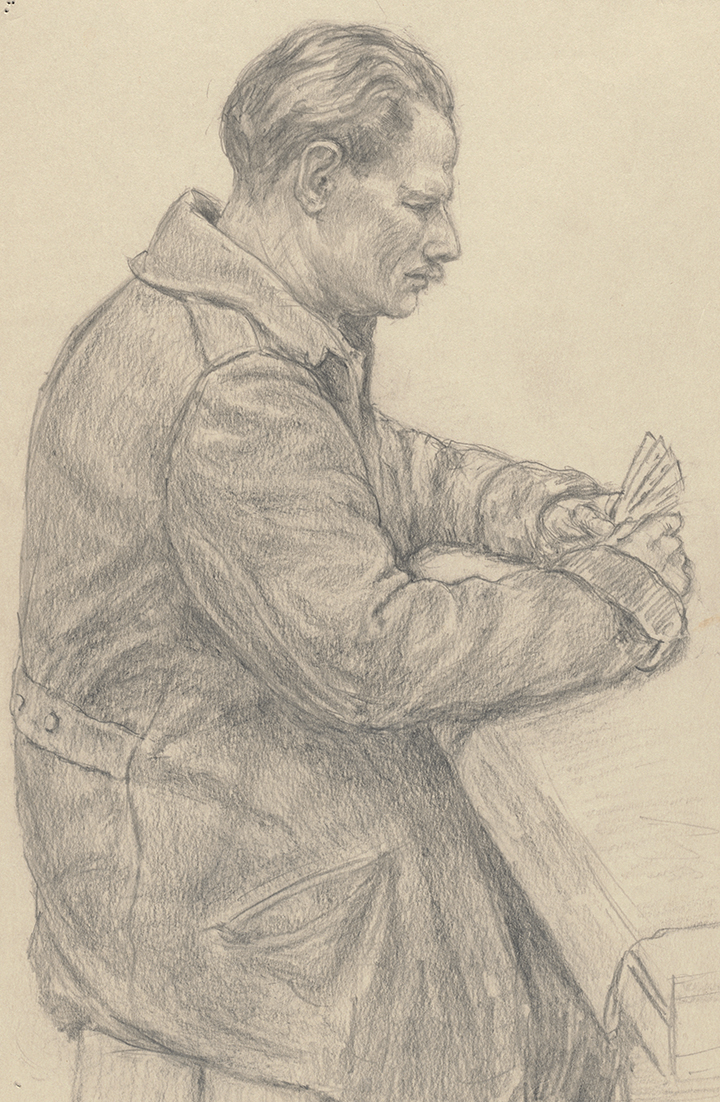 As Hitler’s anti-Semitism became ever plainer in the years leading to the war, more and more German Jews sought refuge in Britain and in other parts of the world. Those fortunate enough to make their way across the English Channel, however, became ‘enemy aliens’ from the moment that Britain declared war on Germany.

At first, that change of status had relatively few consequences, as they were known to be refugees from Nazi oppression. Once the Nazis were victorious in the Low Countries and in France, panic followed and the British Government ordered widespread arrests of ‘enemy aliens’. In an atmosphere of anxiety, the authorities chose not to attempt to distinguish between those who were for Hitler and those against. Instead, they chose large-scale internment, with no regard to faith, race or politics.

To ease the burden of sustaining a large and growing internee population, the British Government decided to send a portion of them to the dominions, including Australia. The task of the troopship Dunera was to take 2,542 ‘enemy aliens’ to Australia. The majority—altogether 2,036—were anti-Nazi and most of them were Jews. The 57-day voyage, which commenced in Liverpool on 10 July 1940, took on nightmarish qualities in overcrowded, deplorable conditions marked by ill-treatment, inadequate rations and disease. One of the men, Ernst Frohlich, recorded in his diary:

The ship was vastly overcrowded. Hygienic conditions were simply appalling. No toothbrushes, nor toothpaste, no soap and soft water for a great party of the journey. The suitcases were opened forcefully by soldiers. Many things, sometimes everything were taken out, put into the pocket or thrown overboard.

For the majority of passengers, a reprieve did not come until the vessel reached Sydney and they were packed onto a train to travel 750 kilometres to the internment camp at Hay. 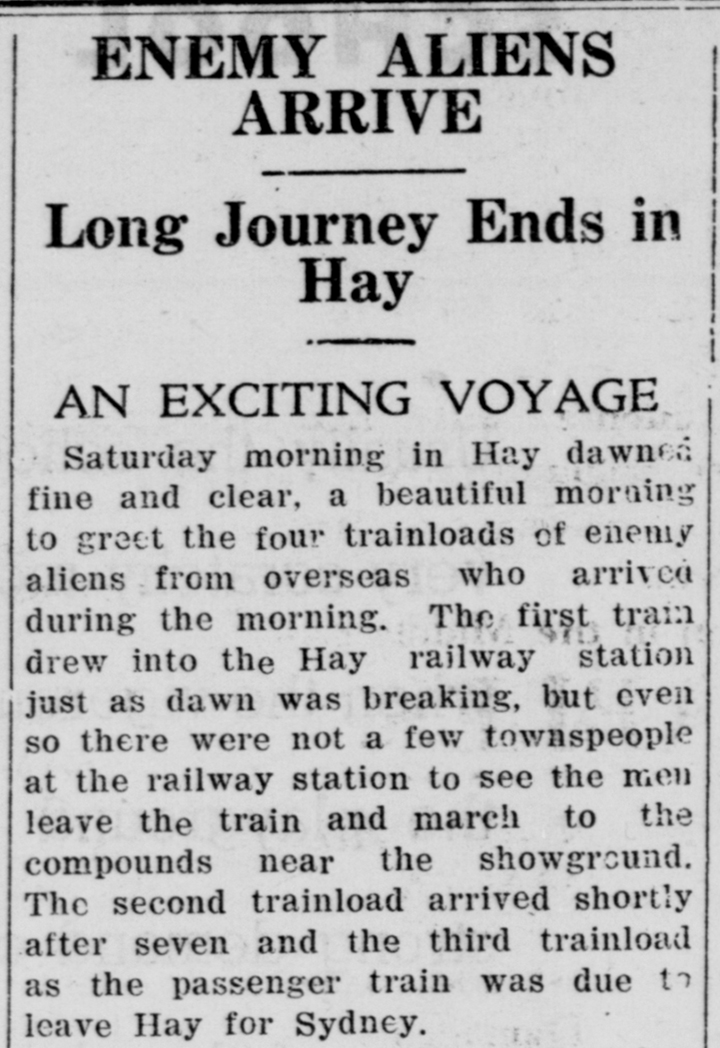 The passengers had little idea of what awaited them on the open plains of western New South Wales. Their destination was not revealed until the next morning, as Walter Kaufmann remembers:

We travel into the darkness. The soldiers have long fallen silent, as have we; the wheels clatter monotonously, the rat-a-tat penetrates our half-sleep, and when at dawn the beat of the wheels stops, the train has rattled to a halt. In black on the grey station wall is emblazoned the word HAY, and along the platform soldiers stand in line, all of them younger than those on the train. They stand there watchfully, their slouch hats buckled tightly under their chins, and then a lieutenant gestures behind him with his thumb—he makes a bold impression with slouch hat and leather strap across his breast. ‘Okay, you men, come on out!’, we hear him call … Flanked by the soldiers, we march from the station. Under a cloudless sky and scorching sun, in the middle of the column I trudge toward the watch-towers, recognizable in the distance. The lieutenant, who has ridden ahead on his brown stallion to disappear in a cloud of smoke, and calls to us in apparent derision: ‘Hot and dusty, too right—but you’ll get used to it. Too right!’

The Australian Government later recognised that treating ‘aliens’ who were refugees from European persecution was unfair. From February 1942, the National Security Regulations distinguished clearly between ‘Allied nationals’, ‘enemy aliens’, ‘neutral aliens’ and ‘refugee aliens’. Fortunately for the Dunera Boys and many like them, classification in the last of these categories brought release from internment. Commonly, these men then volunteered for service in the Australian Armed Forces. For them, at last there was an opportunity to fight fascism, and they eagerly embraced it.

Peter Monteath is Professor of History at Flinders University in Adelaide and author of a number of books on Australian and European history. This is an adapted extract from his book Captured Lives: Australia’s Wartime Internment Camps, released by NLA Publishing in August 2018.