Jack Braga: The Man and His Collection

Fifty years ago, a significant collection on the Portuguese in East Asia was acquired by the National Library. It was the life’s work of José Maria ‘Jack’ Braga. Jack was a teacher and businessman who was born in Hong Kong in 1897, lived for 20 years in Macau and died in San Francisco in 1988, aged 90. His family roots in Macau dated back to 1714 and to 1844 in Hong Kong, where two of his great-grandfathers had emigrated soon after the British occupied the territory. 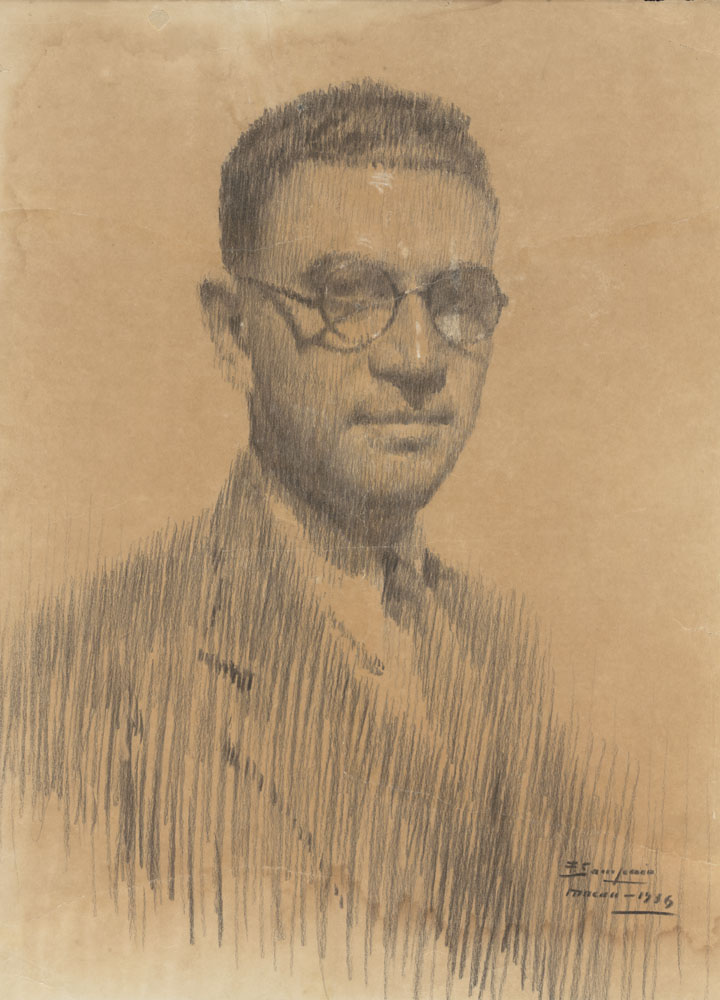 In Macau, Jack learned of the history of the Portuguese encounters with East Asia in the early sixteenth century—a history previously unknown to him. With remarkable persistence, he set about recording and collecting the Portuguese history of Macau.

I felt so frightfully ignorant that I wrote to Hong Kong asking for books about Portugal and the Portuguese, to be told there were no such things. So I wrote to London and the first name that occurred to me was Foyle’s; they sent me a little list of half a dozen books, all of which I ordered, but only two were still available. Then I went on from there, on and on, and finally I mastered a fairly comprehensive collection of books on Portugal, the discoveries and then finally how they reached Macau and from Macau to Hong Kong … My books, now in the National Library of Australia, are my contribution, shall we say, to a fascinating story.

Jack had a significant role in 1926 in the publication of the second edition of an important book by Carlos Montalto de Jesus, Historic Macao. It at once became a very rare book when the authorities, offended by what they saw as disparaging comments about Macau’s future, seized all copies they could find and later burnt them in the public square in front of the Council Chamber. The author was described in the press as ‘this enemy of the Macanese people’. There are three copies in the National Library; they survived because Jack courageously refused to hand them over, instead having one of them splendidly bound in leather. This copy has the author’s grateful inscription: ‘To my dear friend Jack Braga these lines are inscribed as a token of recognition for his kind efforts in getting up this second edition of the work’. 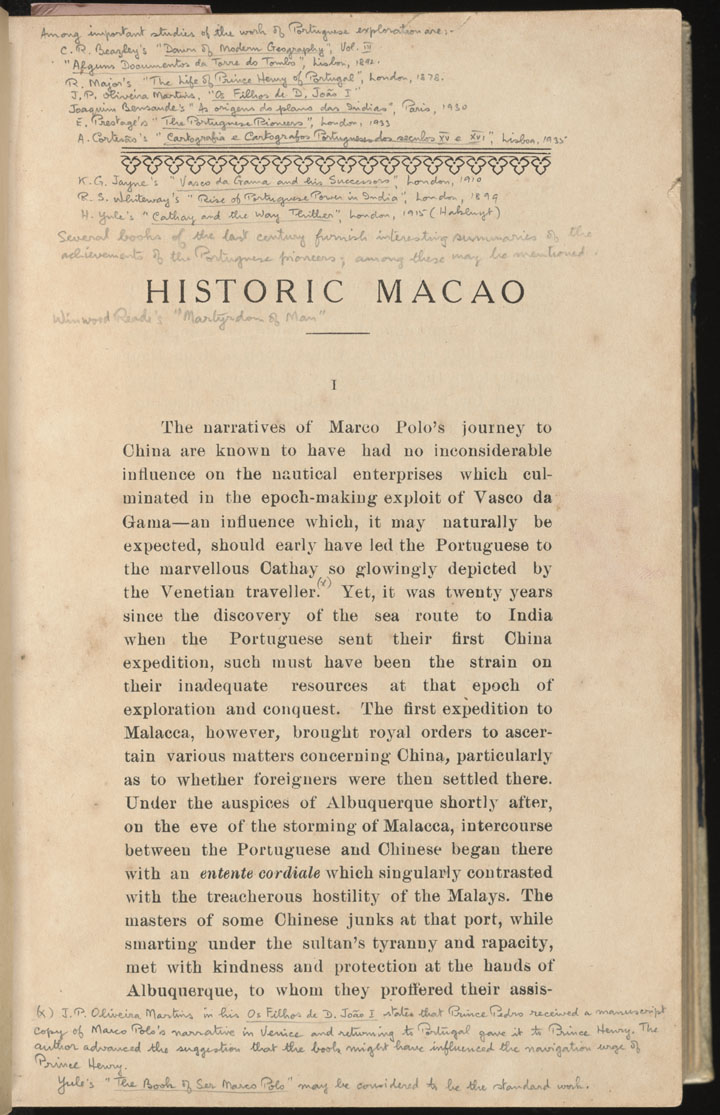 The outbreak of the Pacific War in 1941 led him to collect intensively as much of the printed record of wartime Macau as he could. This unique and detailed collection says much about a small community at the edge of the conflict, with Japanese troops and informers all around. Jack’s activities in wartime Macau were diverse and extensive. He continued to write historical articles for the local press, with an eye to boosting the morale of several thousand English-speaking refugees in Macau. He broadcast weekly on current affairs from June 1941 to December 1942 on the station operated by the Macao Radio Club, there being no government radio service. Jack also became involved in Allied Intelligence activities. On at least one occasion, his life was in immediate danger because of assistance he gave to American airmen shot down off Macau in January 1945. Jack arranged for them to be spirited away to Free China despite the constant watchful presence of Japanese agents.

After the arrival of his father, José Pedro Braga, from Hong Kong in June 1942 as a refugee, Jack encouraged him to commence a book he had intended to write for many years, The Portuguese in Hongkong and China. Although it was incomplete when J.P. Braga died in February 1944, Jack had a very small interim edition published of the 12 completed chapters. The National Library has four of only six copies known to have survived. There have since been several later editions of this seminal book.

Unlike many in Macau who experienced the nearly four years of constant hunger and severe privations between 1942 and 1945, Jack Braga did not lose his drive and strong community spirit. From 1946 to 1966, Jack lived and worked in Hong Kong, running an import–export business, and greatly expanding his collection. He added some magnificent maps. When Emanuel Bowen published his ‘new and accurate map of China’ in 1747, the main geographic features were known; of particular interest in this map is the drawing next to the cartouche. It clearly shows that the Chinese were to be regarded as civilised people, with an advanced form of architecture and a well-developed legal system, as a miscreant is seen kneeling before a mandarin. 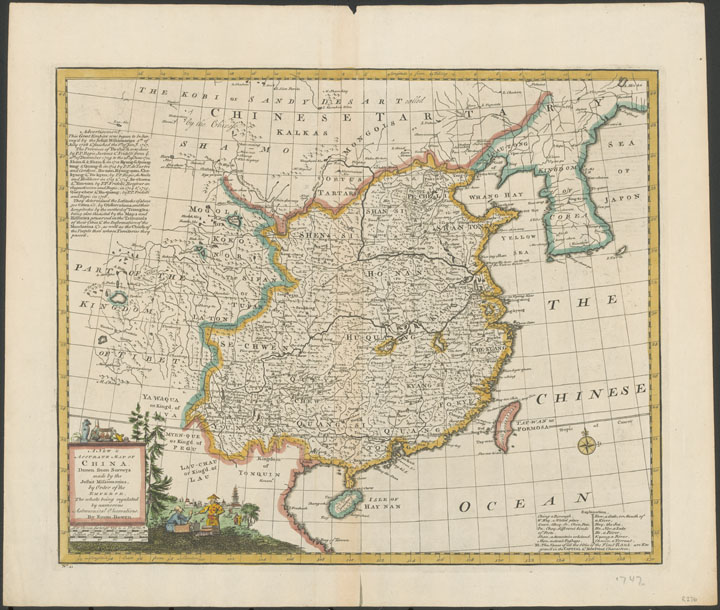 Emanuel Bowen, A New & Accurate Map of China: Drawn from Surveys Made by Jesuit Missionaries by Order of the Emperor … (London: Printed for W. Innys and Others, 1747), colour map, nla.obj-231220211

Living in Hong Kong after the war gave a new dimension to his collection, which now extended to the history of British activity in the Far East from the late eighteenth to the mid-twentieth century. In addition, his determination to record the history of Portuguese expansion took a new turn. In 1952, he visited Portugal, and embarked on a project of securing transcriptions of the important ‘Jesuits in Asia’ manuscripts in the Ajuda Library, Lisbon, documenting the activities of early navigators and missionaries. He regarded these manuscripts as the most important part of his collection.

He continued to write as well as to collect. In 1949, he produced a major book, The Western Pioneers and Their Discovery of Macao, and several scholarly papers, notably The Beginnings of Printing at Macao. For several years, he prepared an extensive bibliography for the Hong Kong Annual Report. His growing reputation led in 1949 to the award of Cavaleiro da Ordem de Sant’ Iago da Espada (Knight of the Order of St James of the Sword) by the President of Portugal.

During the 1950s, Jack came to realise that there was no long-term future for himself and his family in East Asia. Political troubles in Hong Kong and Macau associated with the rise of the Chinese Red Guards hastened his decision, and in 1966 Jack sold his library to the National Library of Australia, where he worked as a consultant from 1968 until 1972.

By the time he died in 1988, Jack’s name was held in honour in the little Portuguese-controlled territory that he had done so much to promote. The Portuguese Government posthumously awarded him the high rank of Grande Oficial, Ordem do Infante Dom Henrique (Grand Officer of the Order of Prince Henry the Navigator). He has left a fine legacy at the National Library—a collection of abiding value not only to Australia, but also to a steadily growing body of international users.

Dr Stuart Braga has published histories in a wide range of topics, including Australian military history. His PhD thesis was largely researched in the Library’s J.M. Braga Collection, which includes about 7,400 printed books and pamphlets, some 200 manuscripts, several boxes of pictures and 250 maps.

Jack Braga: The Man and His Collection
Stuart Braga