Nat Williams tells the stories behind the Library’s treasures

On 27 April 1818, Sydney convict John Slater wrote to his wife on the other side of the world. Seven months later in Nottingham, his wife Catharine arranged to print his letter. She confided in the publication that she hoped its sales would ‘assist me in fulfilling my husband's wishes, by enabling me … to go to him, with my four children, to settle in that country’—such was the interest in John's account of the colony. Is this the earliest known example of crowdsourced funding in our history? 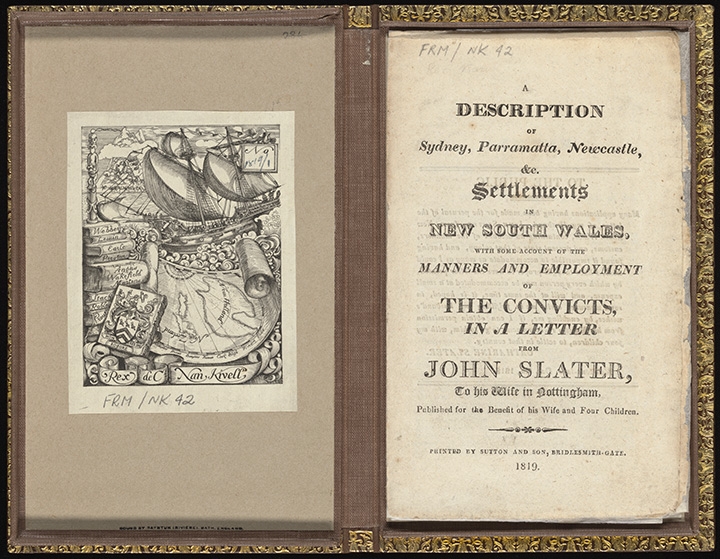 John Slater, A Description of Sydney, Parramatta, Newcastle, &c., Settlements in New South Wales, with Some Account of the Manners and Employment of the Convicts, in a Letter from John Slater to His Wife in Nottingham, Published for the Benefit of His Wife and Four Children, 1819, nla.cat-vn826324

Only four copies of Slater’s printed letter are known and the Library holds two in its Rex Nan Kivell and Ferguson collections. Both collectors paid handsomely for their copies, realising their rarity in Australian bibliographic collecting.

Addressed to ‘My dear Wife’, Slater imparts a lot of information in his 5,000 words. He covers his passage to Sydney on the Larkers and his arrival on 21 November 1817. After several months to consider the state of the colony, he finds the Sydney climate ‘very healthy and the air is truly salubrious’. Slater writes evocatively; he sounds well read and presses a largely optimistic case for his family reunion to occur. Ironically, though, he begins his account by describing how his personal effects were plundered ‘in toto’ on the Larkers and warns Catharine to safeguard her effects on board as the convicts ‘would as soon rob their messmates as a stranger’.

Slater goes on to describe Sydney, its buildings and its residents’ houses, ‘each with a garden and most stocked with a peach tree, which thrives abundantly and gives a most delightful countenance to nature in her cultivation and improvement by art’. The Blue Mountains are ‘exceedingly lofty’ and the settlement has expanded. The convict work and rations system, and Newcastle as a place of secondary punishment and of coal mining, are also examined:

it is no uncommon matter to see a clerk, a doctor, a clergyman, or at least persons intended for such employments in the days of their youth, carrying a basket of lime or coals, in company with a man who has been bread a thief from his cradle.

Slater’s description of coal being exported to India has a certain contemporary resonance. 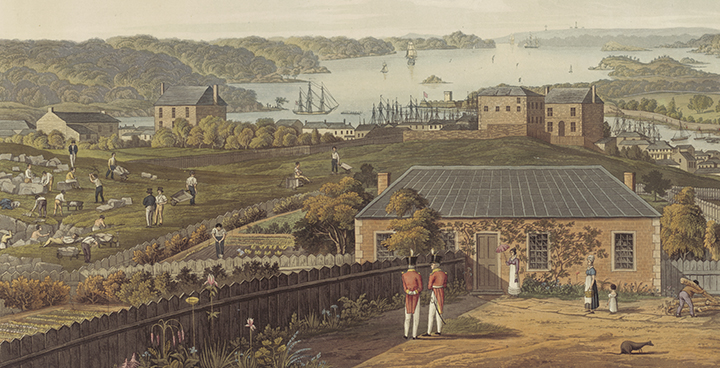 John exhorts Catharine to crowdsource funds from ‘friends’ at home for a 'stocking frame' so he can make a living for them in Sydney. This last point is a cryptic key to better understanding the writer. Slater was a knitter turned Luddite, caught up in the Nottingham ‘outrages’ when disgruntled weavers smashed the machines of their exploitative employers. Slater was convicted of ‘frame breaking’, a crime then punishable by death. At first he was acquitted, but subsequently transported for life, even though he was described by witnesses at his 1817 trial as a ‘very honest and industrious man’.

John signs off by sending his love: ‘Tell the children I have not forgot them … Your very affectionate, though unfortunate husband, John Slater, Silk Weaver, Sydney’. Poignantly, he adds, ‘P.S. I write this because I think it possible that you are still anxious to come after me’. Catharine was indeed anxious for a family reunion and followed John to Sydney, arriving in January 1822. Samuel, 21, Sarah, 19, and Elizabeth, 16, all were reunited with their father after five years of separation. Sadly, Jane, who he specially mentions in his letter, appears not to have survived. However, a new arrival, Henry, was born in Sydney in March 1824. It seems the Slaters prospered in the new colony; John went on to become a constable.