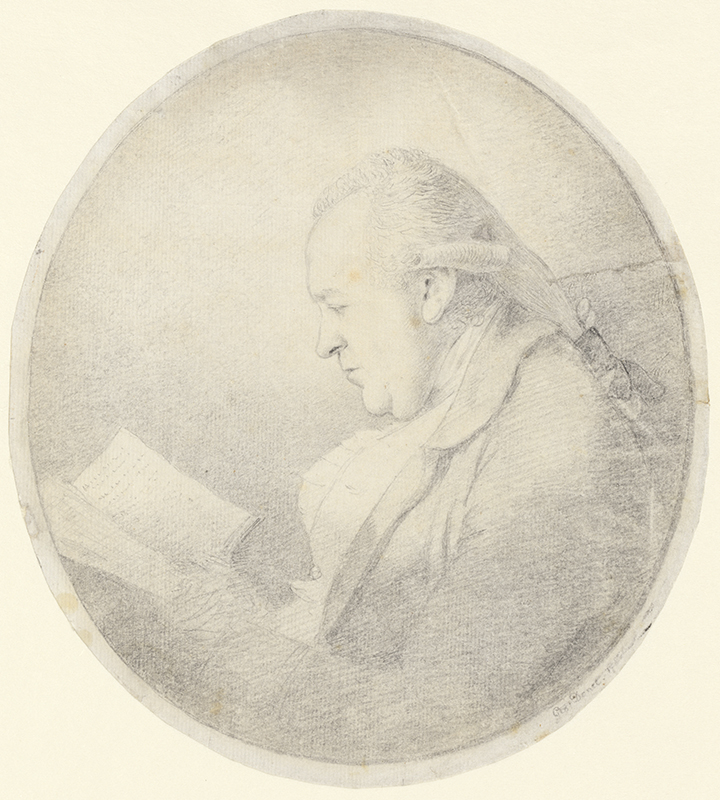 Joseph Banks, James Cook’s wealthier and younger collaborator on the Endeavour voyage (1768–1771), became known as one of Britain’s greatest men of science and was heralded by the public while leading the Royal Society for over 40 years. His great volume of botanical specimens from the Endeavour voyage were belatedly published in his magnum opus, Florilegium. Though Banks strenuously advocated for settlement in Australia, he attracts none of the ire that surrounds James Cook today. His achievements are legendary and too fulsome to catalogue here, but it is interesting to observe that on his return from the Pacific—and thanks to the editorial handiwork of John Hawkesworth, who crafted the sometimes-racy official narrative of the Cook voyage—Banks’ amorous exploits were as well known as his scientific endeavours.

In the Library’s current tapa cloth exhibition, In Cook’s Wake, reference can be found to an amusing story about Banks, or Opano, as he was known in Tahiti. Having befriended the high-ranked Society Islander Tupaia, Banks became enamoured of Tupaia’s ex-lover Queen Oborea (Purea). On first meeting Oborea, Banks wrote, ‘was I free as air her majesties person is not the most desireable.’ Keen-eyed voyage artist and Quaker Sydney Parkinson described her as, ‘a fat, bouncing good-looking dame’. Banks’ opinion was soon to change: ‘my old Freind Oborea who readily gave me a bed in her canoe much to my satisfaction.’ Banks continues, stating that, having undressed, ‘Oborea insisted that my cloths should be put into her custody, otherwise … they would certainly be stolen. I readily submitted and laid down to sleep with all imaginable tranquility.’ Later, clothes pilfered anyway, Oborea came to the rescue, and provided him ‘with cloth to supply the place of my lost Jacket so that I made a motley apearance, my dress being half English and half Indian.’ Then, perhaps semi-attired in the finest hobu tapa—reserved for the elite (Ari’i)—his ‘lordship’ searches for his jacket and pistols.

Banks’ amorous Pacific exploits and perceptions of him as a dilettante inspired caricature in both verse and image. He is lampooned in prints by Matthew and Mary Darly as The Botanic Macaroni and as a donkey-eared, globetrotting Fly Catching Macaroni, which makes fun of the vogue for foppish young men to take a Grand Tour. Banks owned copies of these prints so was presumably amused by them, his growing standing in British society and healthy ego making him impervious to ridicule. Banks’ friend and travelling companion, the botanist Daniel Solander, is caricatured as The Simpling Macaroni and captioned‘Like Soland-Goose from frozen zone I wander, On shallow Bank’s grow’s fat Sol-----’. Further criticism of Solander and Banks can be seen in the imaginary Simon Snip’s The Philosophical Puppet Show, or Snip’s Inauguration to the President’s Chair. Addressed to Sir J------- B-----, … A Celebrated Connoisseur in Chickweed, Caterpillars, Black Beetles, Butterflies, and Cockle-shells (1663 [i.e. 1783]). Solander appears to be on the right in the frontispiece, his profile mirrored by that of an ass. He holds a piece of verse entitled To the Queen of Otaheite. Banks can be seen seated about be crowned with a fool’s cap, whilst distractedly viewing what appears to be an eighteenth-century sex toy through his magnifying glass. All while sitting on a structure bearing the words, ignorance, insolence, pride and arrogance. This savage attack on Banks, or ‘Sir Joseph Margin’, seems to have been penned by sacked Royal Society Foreign Secretary Charles Hutton—indeed, the Library’s copy bears his name handwritten on the title page. 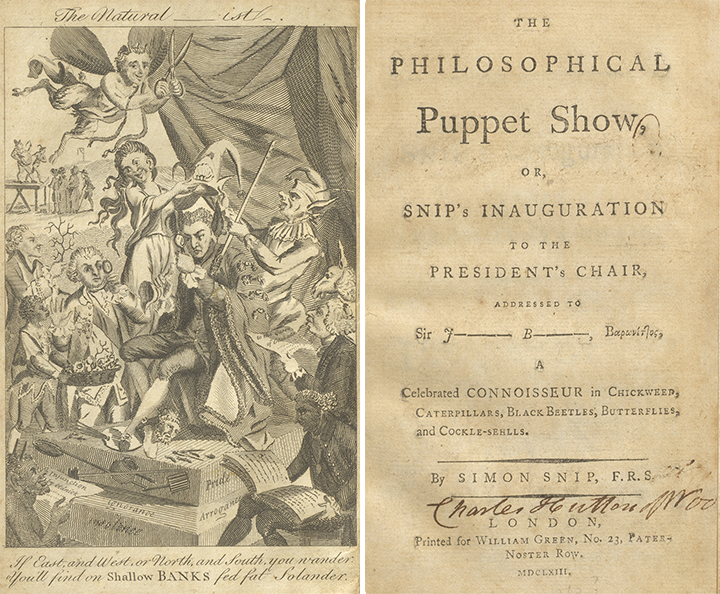 Banks’ reputation also spurred the creation of numerous verses, supposedly exchanged between Banks and Oborea, to which Solander’s printed poem above refers. One tender pining poem, penned by ‘Oborea’ bears the title An Epistle from Oberea, Queen of Otaheite, to Joseph Banks, Esq., Translated by T.Q.Z., Esq., Professor of the Otaheite Language in Dublin (1774). This affectionate poem and its successor, A Second Letter from Oberea,were probably written by John Courtenay, Irish-born British politician and ‘erudite wit … of the school of Diogenes.’

These ghosted poems, sold for a shilling and multiply held in the National Library’s collections, attest to the public interest in Banks and his world. From Opano to Macaroni, from ‘Voyager, Monster Hunter and Amoroso’ to having a memorable species of Australian plant named for him, Joseph Banks’ life, both imaginary and factual, is exceptionally preserved within these walls.