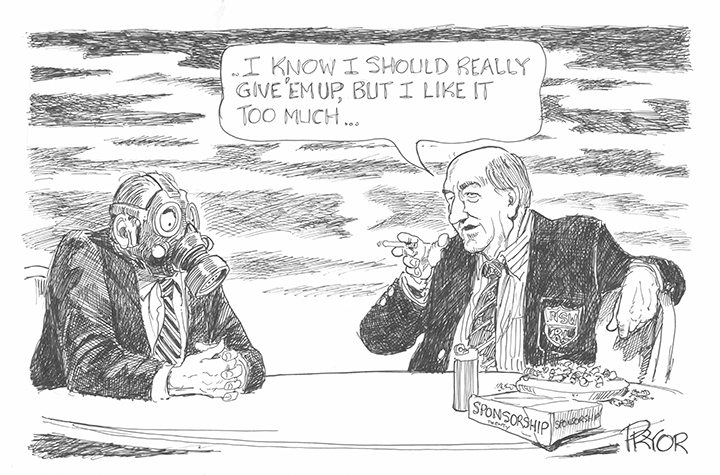 Geoff Pryor, I Know I Should Really Give 'em up ..., Pryor Collection of Cartoons and Drawings, nla.cat-vn3117341

In this cartoon from the early 1990s, Geoff Pryor reminds us how Rugby League was addicted to tobacco sponsorship. John Quayle, the then general manager of the NSW Rugby League, is depicted lamenting his inability to quit the ciggies: ‘I know I should really give’ em up, but I like it too much’.

Rugby League has a long history of tobacco sponsorship, with W.D. and H.O. Wills sponsoring the NSW premiership competition from 1960 to 1981. The code’s dependence on tobacco money, however, hit its peak in the 1980s when Rothmans’ Winfield brand became a major sponsor of the game.

Winfield was a market leader in Australia at this time, but was under pressure from competing brands Dunhill and Benson and Hedges. Advertising agency Hertz Walpole created the ‘Anyhow have a Winfield’ campaign, built around comedian Paul Hogan, to portray Winfield as a quintessentially Australian brand. Rugby League, with its strong working class roots and masculine image, seemed the perfect match.

The challenge for Hertz Walpole was to find a symbol that could successfully harness the appeal of Rugby League to promote smoking. The ad men made the inspired choice of the ‘gladiators’ photograph taken by Herald Sun photographer John O’Gready after the 1963 grand final, which featured St George’s Norm Provan enfolding his diminutive foe Arthur Summons from Western Suburbs. St George had won the grand final 8–3. The sculptor Alan Ingram transformed this image into a maquette, which was then cast in bronze and mounted on a wooden trophy base emblazoned with the Winfield brand. The trophy was launched at the end of the 1982 season with the slogan ‘Winfield Cup making the big game bigger’.

The Winfield Cup was readily accepted by Rugby League fans. In media coverage of grand finals, the new trophy quickly replaced the traditional J.J. Giltinan shield as the symbol of Rugby League supremacy. Coverage of the post-match celebrations inevitably focused on the victorious team hoisting the Winfield Cup above their heads. With cigarette advertising banned in 1976, this type of exposure was invaluable to Winfield.

While NSW Rugby League was enjoying the benefits of tobacco money, a debate was raging in the broader community about the ethics of using sport to promote smoking. Tobacco sponsorship was criticised by members of the medical profession and anti-smoking groups. The Sydney-based urban graffiti organisation Billboard Utilising Graffitists Against Unhealthy Promotions (BUGA UP) challenged tobacco sponsorship of sport through graffiti campaigns and public shaming events. High on their list of targets was the NSW Rugby League grand final, the Australian Open tennis championship and Formula One racing.

After years of public pressure, legislation was passed in 1992 banning tobacco sponsorship. A three-year period of grace was granted, and Rugby League finally kicked the habit in 1995.

Dr Guy Hansen is the Director of Exhibitions at the National Library of Australia. He will be discussing the story of the Winfield Cup in the Library Theatre at 12.30pm on 4 April.

Guy Hansen examines a cartoon from the Library’s collection