The Library’s latest exhibition, Melodrama in Meiji Japan, profiles the woodblock-printed literary frontispieces (kuchi-e) of the Meiji period (1868–1912), which reveal the Japanese love of drama that surrounds human relationships. Illustrating these relationships in both novels and their accompanying kuchi-e, writers and artists looked not only to contemporary events but also to stories drawn from the past.

One such historical source was classical Japanese verse known as waka. Based upon two days in the life of the waka poet and Buddhist monk Saigyō (1118–1190), Stories of Two Days by Kōda Rohan (1867–1947) appeared in the literary journal Bungei Kurabu in two parts (1898 and 1901). In Part 1, This Day, Saigyō meets the angry ghost of his former friend and mentor, the emperor Sutoku (1119–1164), who had died in exile. Part 2, That Day, deals with the well-known tale of the unexpected reunion between Saigyō and the wife he left when he renounced worldly life at the age of 22 to become an itinerant monk. 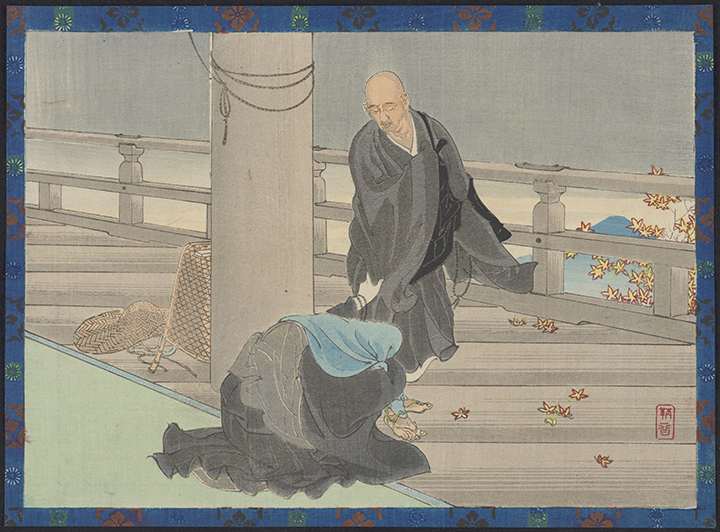 The artist Kobori Tomoto may have felt that a kuchi-e illustrating a supernatural story would not have appealed to readers for Part 1, and instead illustrated the reunion scene between Saigyō and his wife. Following her husband’s departure, Saigyō’s wife also renounced the world and became a nun. One day, as he passed by the temple Hasedera, Saigyō recognised her voice chanting. Neither had seen their daughter since taking vows, and in Tomoto’s representation fallen autumn leaves mirror the sadness of Saigyō’s wife. Tomoto depicts Saigyō looking down upon his wife as she buries her face in his robes. His seemingly detached expression might call to mind a passage in the tale, in which he enlightens her to the nature of compassion: ‘it is human nature for parents to anguish over their children, but trying to gratify a child’s immediate need is a useless folly’. 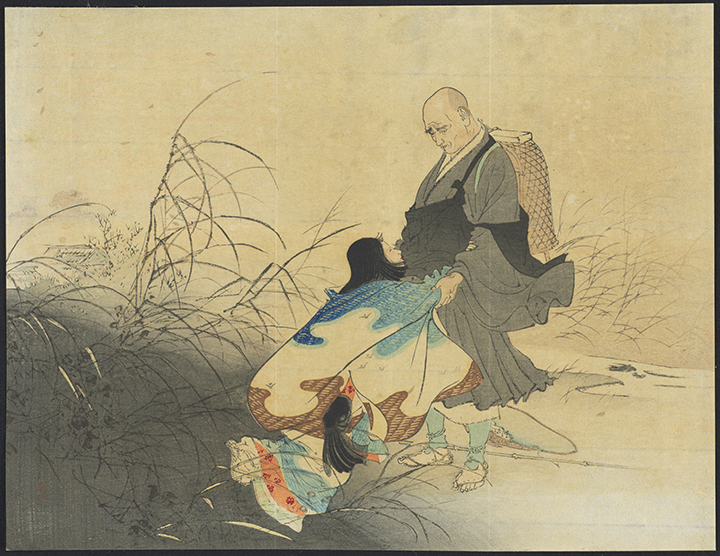 Mizuno Toshikata’s kuchi-e for Part 2 handles the same scene portrayed by Tomoto, prompting a comparison between the two images. Both artists shared a passion for historical painting and were founding members of the Society of Historical Genre Painting (Rekishi Fūzoku Gakai). This interest in the past is reflected in both artists’ careful depiction of Saigyō’s Buddhist robe. However, in contrast with the bland nun’s habit Tomoto gives Saigyō’s wife, Toshikata shows her in the colourful costume and elaborate hairstyle of a court lady. For the setting, Tomoto has chosen an oddly framed perspectival view of Hasedera to evoke the unsettling meeting between the couple. Mount Fuji is visible in the background, locating this view in Kamakura. Toshikata’s design is subtly different, but no less emotionally captivating. Unlike Tomoto’s figures, Toshikata’s couple engages directly with each other through eye contact and their forms stand out against a stark background, with details including an isolated farmhouse and drooping autumn grasses. This adds pathos to the image’s mood and evokes the lyric melancholy famous in Saigyō’s poetry. The reader would not have failed to be moved by such an emotionally charged story, and the accompanying kuchi-e fully exploit this in their visual interpretations.

Dr Gary Hickey lectures in art history. He is the curator of the Library’s exhibition Melodrama in Meiji Japan, which runs from 24 May to 27 August 2017.