Throughout the twentieth century, genocide annihilated human societies across the world. Armenia, Germany, Cambodia, Rwanda and Bosnia-Herzegovina are the most widely recognised and remembered. But what about Bangladesh?

From 25 March to 16 December 1971, Bangladeshis (then known as East Pakistanis) revolted against West Pakistani rule in pursuit of independence. These freedom fighters, the Mukta Bahini, were a mix of military, paramilitary and civilian warriors who were supported materially by the Indian Armed Forces. Enraged by what was seen as colonial exploitation and military dictatorship, Bangladeshis fought for democracy, social justice and secular rule, as well as secession from West Pakistan. 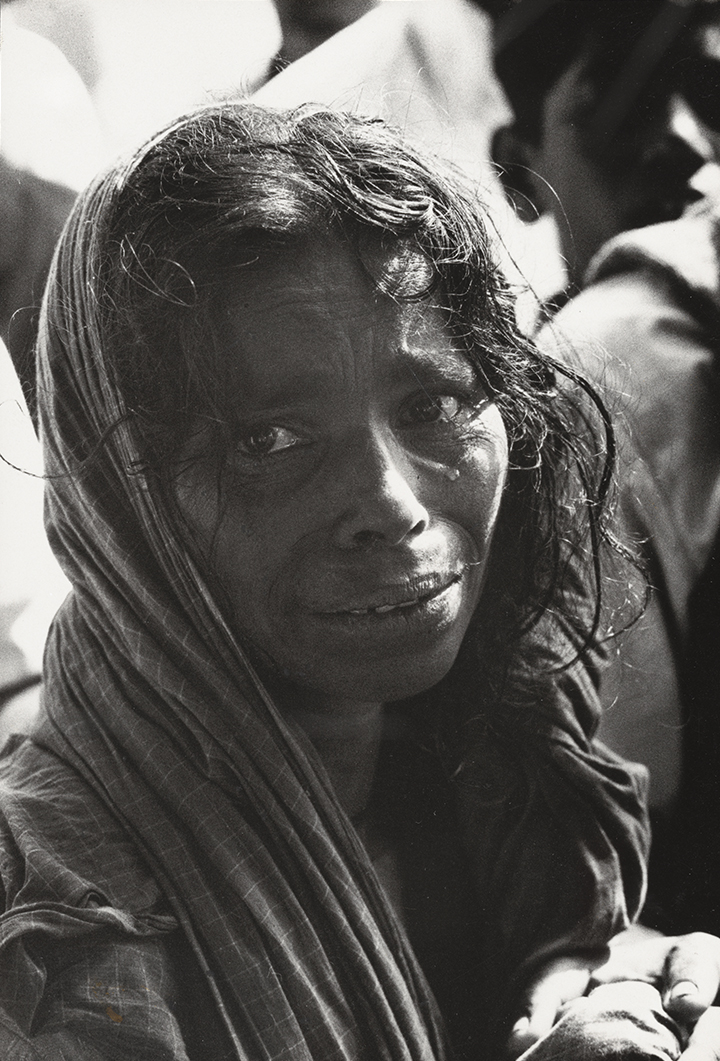 The Pakistani military and paramilitary forces brutally suppressed the resistance movement. Australian Deputy High Commissioner to Pakistan based in Dhaka, James Allen, described the beginning of hostilities in an oral history interview:

On the night of Thursday, the 25th March, Pakistani forces surged out of their cantonments in all the major industrial/urban centres and started machine gunning anybody in sight—students in particular, polices, people on duty, shopkeepers. That went on for a few days in the urban centres, and of course all Bengalis fled into the countryside. Then the army fanned out into the countryside and continued this massacre in the villages. 1971 was a very sad and unhappy year. 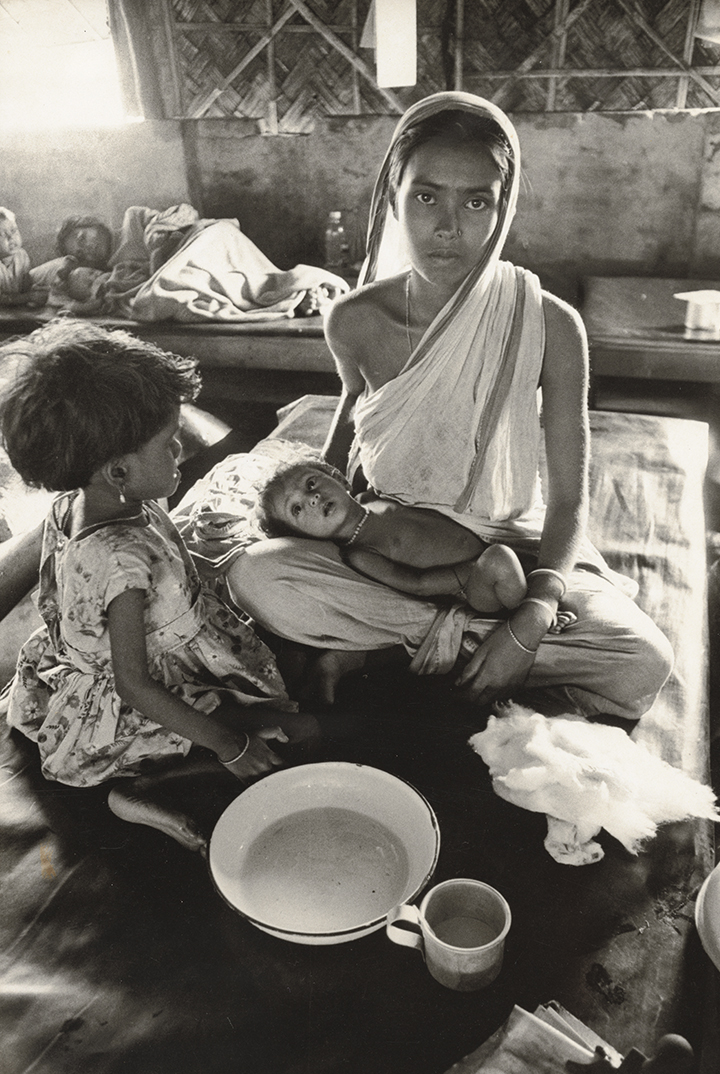 Like many other Western governments, the Australian Government—led by Prime Minister William McMahon—resisted public calls for humanitarian intervention. The official government position was that the conflict in East Pakistan was a civil war and therefore a domestic matter for the Pakistani government. Viewed from a pragmatic policy perspective, the Australian Government had little to gain by meddling in a secessionist movement in South Asia. Pakistan (and South Asia in general) were on the periphery of Cold War battles closer to home. Government inertia, therefore, was to be expected.

What was unexpected, however, was the groundswell of public support for the millions of East Pakistani refugees in India. Galvanised by graphic media coverage of the refugees languishing in camps, Australians from a cross-section of society fundraised and lobbied the government in the pursuit of providing monetary and material aid to the Bangladeshis displaced by war. 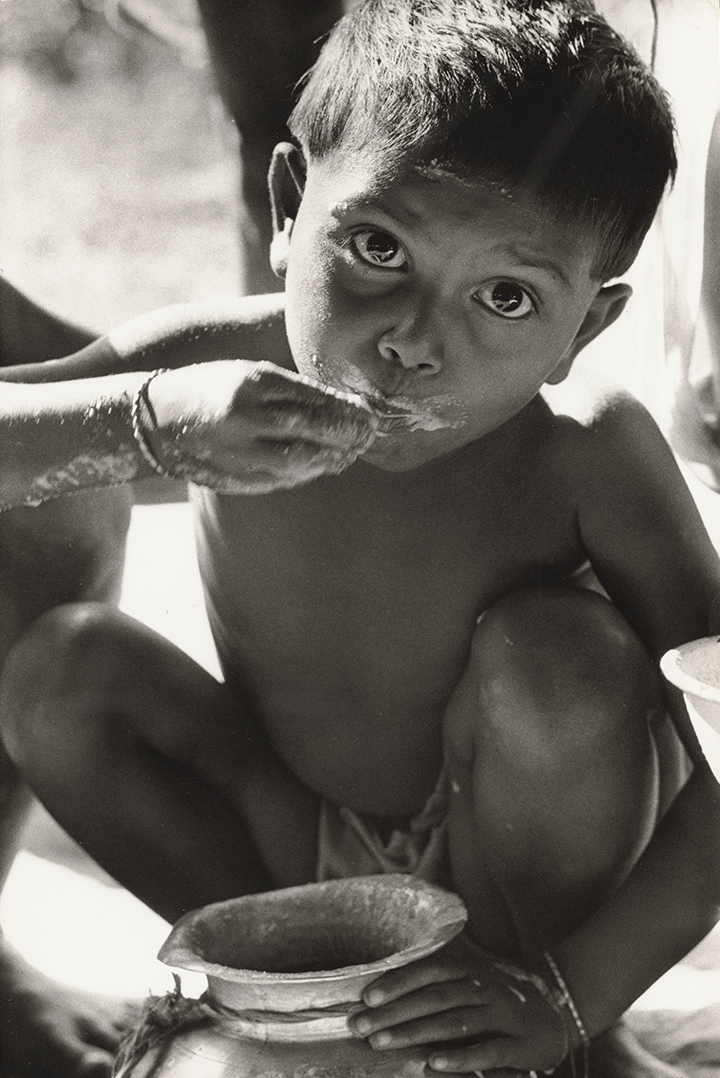 Unlike many other social causes at this time, aid to East Pakistani refugees had broad appeal to the political right and left. It appealed to left-wing activists who abhorred West Pakistan’s seemingly colonial policies towards its eastern wing; to pacifists shocked by the violence and mass killings; to Christians who sought to remedy third-world poverty and inequality; and to internationalists who wanted Australia to play a leading role in world affairs, especially in Asia. Ostensibly apolitical citizens also became involved, writing passionate letters to their local members of parliament or the Prime Minister, pleading with them to do something to alleviate the suffering of distant Bengalis.

The Papers of William McMahon include correspondence with constituents, members of parliament and ministers during his tenure as prime minister from March 1971 to December 1972. In total, this correspondence span 100 folders, from which I have documented individuals who wrote to Prime Minister McMahon or their local member, noting their postcode of residence, vocation, gender, age and marital status.

Data visualisation provides compelling summaries of who, precisely, lobbied the Australian Government to increase humanitarian aid to the refugees. This visual below shows that everyday citizens wrote to the Prime Minister in higher numbers than leaders from church, political, aid organisations, or the military and universities. This was a grassroots movement, with momentum independent of elites or organised lobby groups.

Although Australians who lobbied politicians came from diverse backgrounds, this activism was not evenly spread across the nation. Constituent correspondence emanated disproportionately from Canberra, Melbourne, Sydney and Adelaide. East Pakistani refugees, it seems, were mostly a south-east Australian concern, of little importance to smaller cities and regional areas. 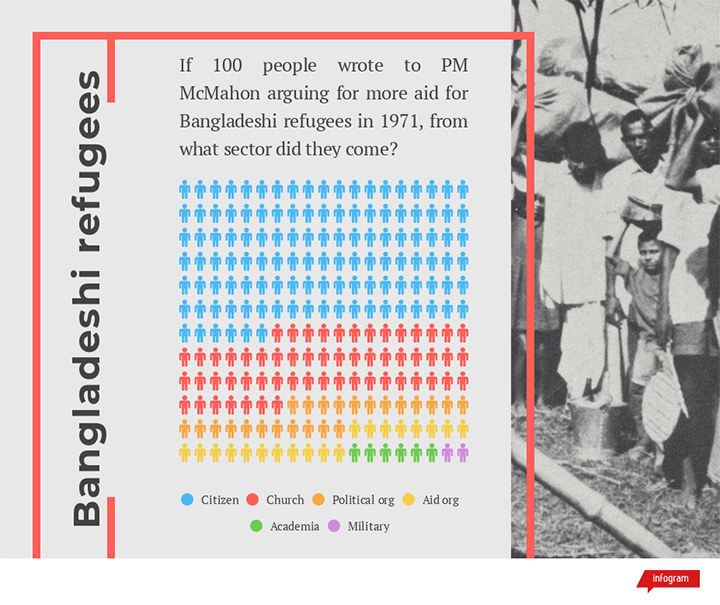 The constituent letters archived in the papers of William McMahon were generally brief, arguing for greater refugee aid on compassionate and/or religious grounds. It is evident that these citizens were driven by emotion; their letters omitted reflection on the fiscal or geopolitical consequences of any major increase in Australian aid to the refugees. One anonymised letter to a local minister of parliament—and by extension the Prime Minister—is indicative of this trend. It reads:

I ask you to urge the Australian Government to do more for the great human tragedy of Pakistan, immediately increasing the aid [tenfold] by at least $10 million and take the strongest possible diplomatic action in the United Nations, and through other channels.

Despite initial government indifference to the East Pakistani refugee crisis, extensive and impassioned citizen-led activism arguably had tangible effects. Throughout 1971 and during the reconstruction period in 1972, the Australian Government continued to increase its financial and in-kind donations to feed, shelter and provide medical assistance to Bangladeshi refugees, all the while risking retaliation from the (West) Pakistan Government and its close Cold War ally, the United States. By the end of 1972, the Australian Government had committed $2.5 million in refugee aid and rehabilitation, roughly equivalent to $27 million in today’s money. Furthermore, Australians privately donated in excess of $2.2 million during 1971 alone to various humanitarian organisations, especially to Austcare, Australian Red Cross and Australian Catholic Relief, according to United Nations records in Geneva. Cumulatively, Australia became a leading donor nation in raw terms, a fact even more remarkable given the small population (and tax) base of 12 million people in 1971. 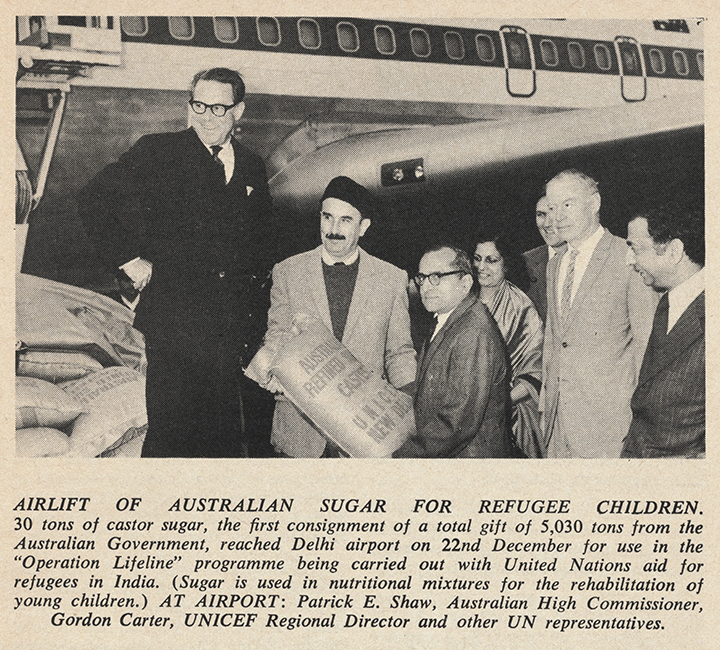 There are three messages that can be taken from Australians’ involvement in the Bangladesh Liberation War. First, Australians were well ahead of government policy, and in this instance, effectively lobbied their government to escalate its involvement despite initial indifference to the plight of Asian refugees. This is a story of ‘people power’ and a reminder of the potential of grassroots activism, particularly when the issue has bipartisan support across the community.

Second, this tumultuous event galvanised individual Australians, mobilising them to act to ease the suffering of distant others. The refugees had little in common with 1970s Australia, religiously, ethnically or politically. The refugees were Hindu or Muslim, ethnically Bengali, and many were Maoists or had a vaguely socialist inclination. Why Australians sympathised with refugees who were so fundamentally different to them is perplexing, particularly in the context of Cold War politics, but gives some indication of the human capacity to care in times of great need.

Third, Australian refugee history from this period focuses primarily on Indo-Chinese, Lebanese and East Timorese migrants. The Bangladesh Liberation War and its concomitant destruction and displacement has largely been forgotten in popular and academic histories, at least outside of South Asian communities. Given the sheer scale of this event and the level of public interest at the time, the Bangladesh Liberation War certainly warrants remembrance, though this has not occurred. Is this because Bangladesh was not allied with Western countries during the 1970s? This research reminds us of the selectivity of history-writing and poses the questions: why is it that some atrocities (and their ensuing exodus of people) are remembered and memorialised while others are forgotten? Do we only write about and remember the migrations in which the refugees resettled in the West? Do the refugees need to have some impact on us if we are to acknowledge them?

Dr Rachel Stevens is a researcher in the Department of History at the University of Melbourne and is currently part of the Australian Research Council Kathleen Fitzpatrick Fellowship on the history of child refugees and Australian internationalism, 1920 to the present. In 2018 she was a National Library of Australia fellow.

The War on Terror
Michael Crane