Curator Susannah Helman looks at Australian advertising from the Library's exhibition, The Sell 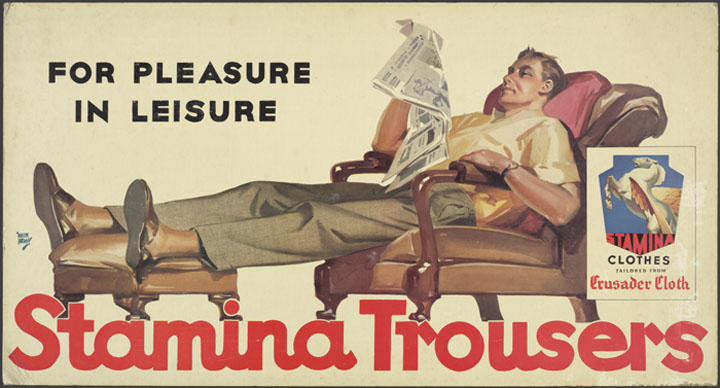 To say this object inspired an exhibition would be an exaggeration, but not completely untrue. It was one of the first advertisements selected for The Sell: Australian Advertising, 1790s to 1990s, on display in the Library’s Exhibition Gallery until 25 April 2017. It is an image of comfort: a man reads a newspaper while sitting on a leather armchair, cushion behind his back, his slippered feet on an ottoman. The recommendation, ‘For pleasure in leisure’, reinforces the relaxed, slightly comical image. By having the subject of the advertisement do very little, in some style, the advertisement suggests a mood many may want to experience, even those of us who do not wear men’s trousers. Probably used in a menswear shop in the 1950s, it is a shop counter display.

Another version, with a different (and perhaps not so poetic) slogan, ‘The most “Relaxing-est” slacks ever made’, was published in Brisbane’s Telegraph newspaper in November 1953. A nearby article described the Stamina Clothing Company as ‘the largest producer of men’s and boys’ clothes in the Southern Hemisphere’, with ‘a capacity of more than two million units of clothing annually’. Stamina advertised extensively to men and boys in the 1950s, and Walter Jardine, one of Australia’s great commercial artists, did much of its artwork, including posters, newspaper advertisements, books and collectors’ card series, notably Men of Stamina, a pantheon of ‘great men’ from Socrates to Alfred Nobel and beyond. Stamina offers ample source material for a study of ideals of masculinity and human achievement in 1950s advertising.

The Sell showcases the Library’s rich, loud and vast collections of advertising and asks what they can tell us about the messages and mechanics of advertising in Australia from the 1790s to the 1990s. It begins with Australia’s earliest surviving printed document, a 1796 playbill advertising an evening’s entertainment at Sydney’s first purpose-built theatre, and ends with a 1998 poster from a Body Shop campaign to promote Reconciliation. It considers how image and text work to inform and influence, and what makes a good slogan, from the blunt ‘Bile Beans for Biliousness’, to the enticing appeal ‘They’re delicious! Delicious!!’, to shock tactics like ‘Read this and spew’. The exhibition addresses advertising controversies, how advertising has reflected a changing Australia, and the different tools used in advertising over the centuries. Colourful, cheeky and bold, there is something for everyone in The Sell.

Dr Susannah Helman is the Curatorial Manager at the National Library of Australia.

Jack Braga: The Man and His Collection
Stuart Braga