Symbols of Culture and Knowledge

As visitors enter the National Library of Australia, they pass under the monumental Library Lintel Sculpture by Australian artist Tom Bass (1916–2010). The copper sculpture, which was installed shortly before the building opened in 1968, features imagery related to the role of the Library as a repository of culture and knowledge. A closer look at this impressive artwork reveals the meaning behind its composition. 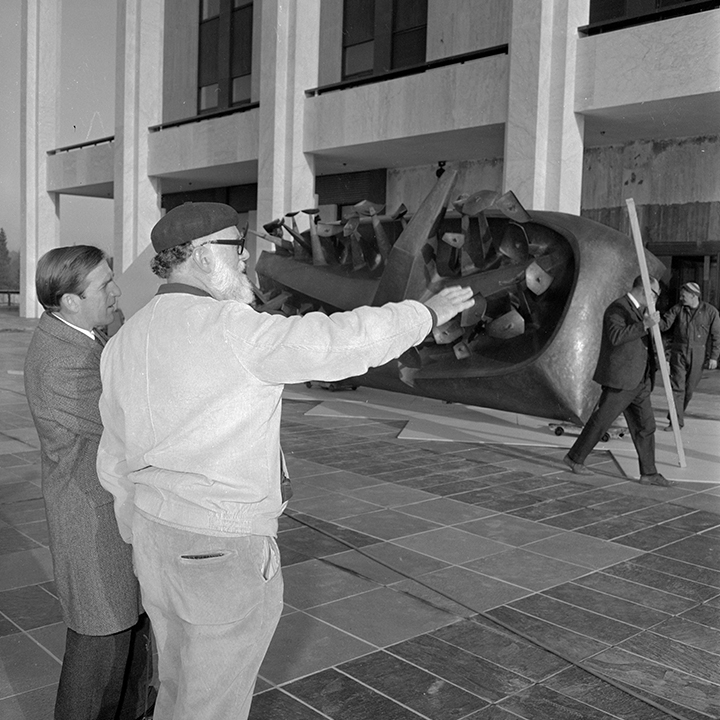 David Reid, Tom Bass at the Installation of his Library Lintel Sculpture above the Entrance to the National Library of Australia, 1968, nla.cat-vn995431

Bass was approached about the commission in 1966. The building’s architect, Walter Bunning, asked him to work with the theme of the classical elements—water, earth and sky. Bass was aware of the need to make a striking work that symbolised the purpose of great libraries, as documented in his papers and those of Bunning. In 1968 Bass wrote to the National Librarian, Harold White, outlining his thoughts on the work, which he described as being conceived from ‘a progression of intuitions and evolving ideas; thoughts of the Library as a living centre of knowledge and the vessel of our cultural residues’. This observation makes clear his intention to design something that expressed the cultural significance of the Library.

The Library Lintel Sculpture measures over 21 metres in length and was made in three parts at Bass’ farm in Minto, New South Wales. Each section features a dominant symbol: a winged sun in the centre, with an ark on one side and a tree on the other. The imagery was inspired by ancient Sumerian cylindrical seals which, as Bass explained elsewhere, were used by the Sumerians ‘as insignia to authenticate their cuneiform writings and they were rolled across the clay envelope in which the writings were enclosed’. He added that ‘the sculpture could be considered as the seal of authentication of the contents of the Library, which it encloses’. Upon looking at Bunning’s plans for the Library building, Bass was reminded of these seals, partly due to their links with the origins of writing. 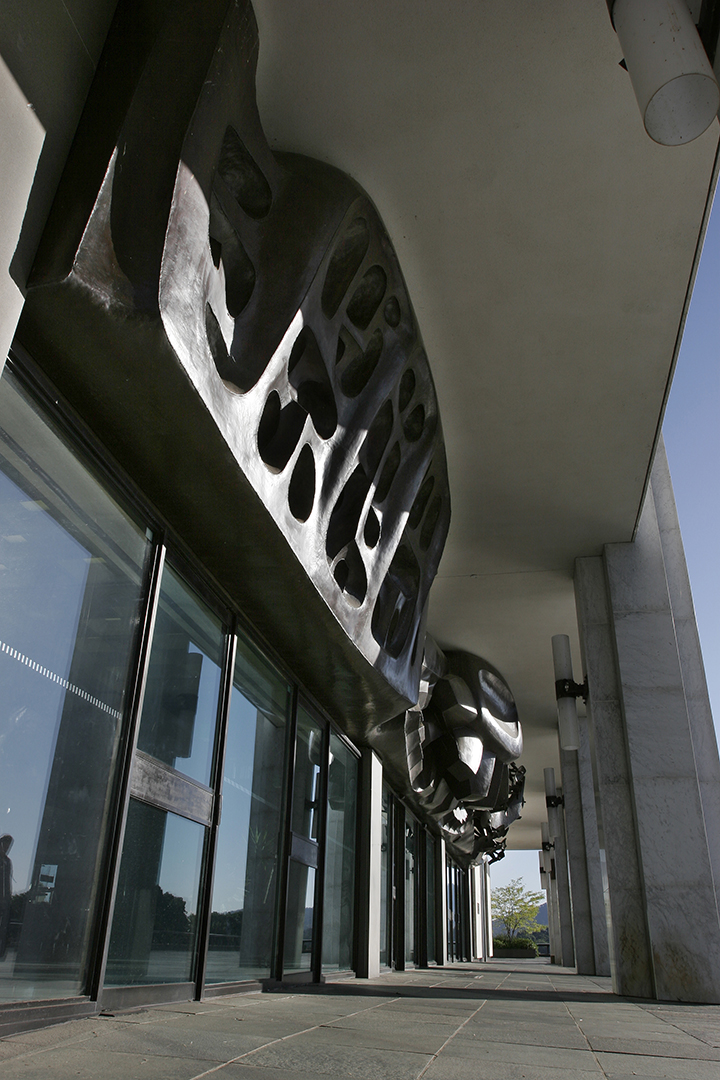 Loui Seselja, Bas Relief Over the Entrance Doors of the National Library of Australia, Canberra, 2004, nla.cat-vn3585415

Each of the three symbols in the lintel relates to the role of the Library. Bass wrote that, for him, the themes ‘are “ultimate or absolute truth” shown as a winged sun … which in this context aims to project the immense power and revelation of inspired truth’. The symbol merges into the next, as ‘One of the wings becomes “the tree” … to express the growth of knowledge generated by truth’. Finally, he described the ark as ‘the emblem of the library, the timeless image of conservation’, which is ‘like a honeycomb, heavy with the nectar of our cultural residues’.

The design was first developed as a maquette—a small, preliminary model—and then created at its full size by Bass with metal fabricator Kevin Goodridge. A 1968 documentary about the lintel shows it being made out of sheets of copper that were cut to size and given a hammered finish. The pieces of copper were welded together and secured to steel frames; the sculpture weighs about three tonnes in total. The strength and colour variety of the material contributes to the artwork’s success. Bass explained how ‘through heating, annealing and welding’ the colours that emerge are blended ‘and the hammered forms and surfaces glow and reflect and are brought out to capture the light’.

Bass’ Library Lintel Sculpture is an impressive artwork that symbolises the important purpose of the Library. It lives up to his declaration that it is not ‘merely a thing to be seen, but something to be physically experienced as one passes under and through it’.

Dr Grace Blakeley-Carroll is a curator in the Exhibitions branch at the National Library of Australia.