Most people have never heard of Eirene Mort. More’s the pity. Her brief luminescence and long-term legacy have not been accredited with the recognition they deserve.

Eirene Mort (1879–1977) was one of the breed of ‘New Women’: young women who, at the beginning of the twentieth century, emerged from the confines of the home and stepped out into the wider world. She made art—and she made it with confidence and clarity.

Eirene’s talent for drawing was recognised early in her life and encouraged by her parents and the teachers at St Catherine’s Clergy Daughter’s School (now St Catherine’s School) in Waverley, Sydney. She won the University of Sydney medal for Design in 1897 in her final school exams. In 1899, she set out alone for London to study to become a teacher of art and design. 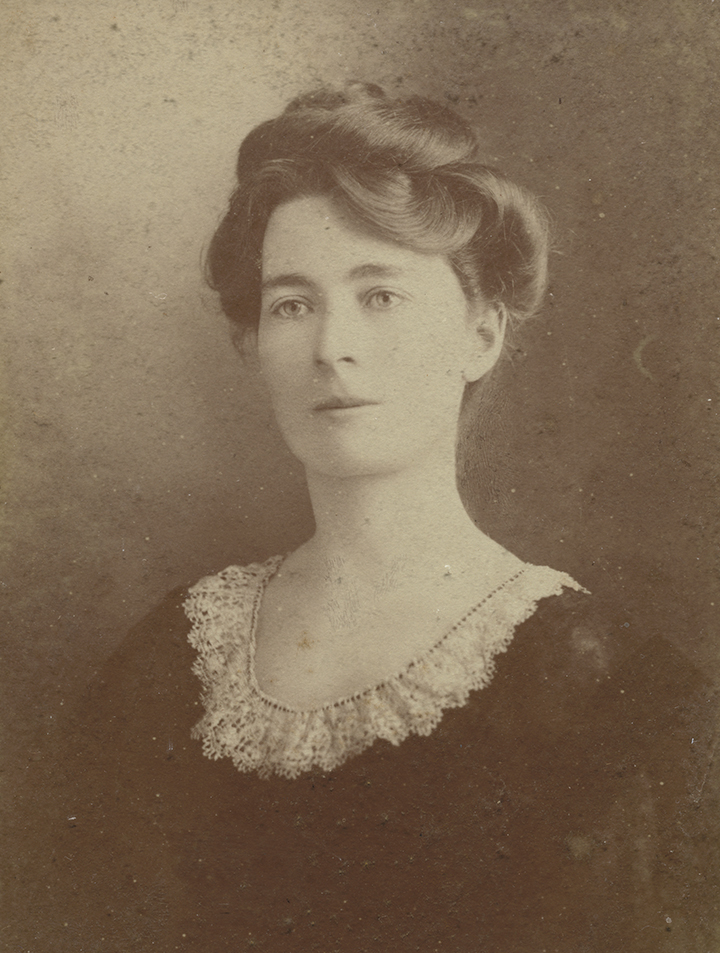 When she arrived in London, the Arts and Crafts movement was in full swing. Determined to master as many aspects of both fine and applied arts as she could, Eirene attended no less than five art training organisations, mastering an astonishing range of skills during this first visit to London, and on two further visits that followed in 1912 and 1926. She took to heart William Morris’s injunction to ‘have nothing in your house except what you know to be useful or believe to be beautiful’.

London life was not just hard work. The young Eirene was caught up in many social activities, which included her attendance at a garden party at Buckingham Palace with her cousins and enjoyable outings with fellow art students. She became particularly close to E.H. ‘Kip’ Shepard—later well known as the illustrator of the Winnie the Pooh books.

By the time Eirene returned to Sydney at the end of 1903, she had established a close relationship with fellow artisan Nora Weston—known to one and all as ‘Chips’. Their relationship has proved difficult to classify. If it did contain a sexual element, neither of them openly acknowledged it. In any case, Eirene did not have to make her way in the art world alone. Nora supported her totally, and was content to ‘take a back seat’. They were, in enduring ways, a partnership in life, and often in art practice. 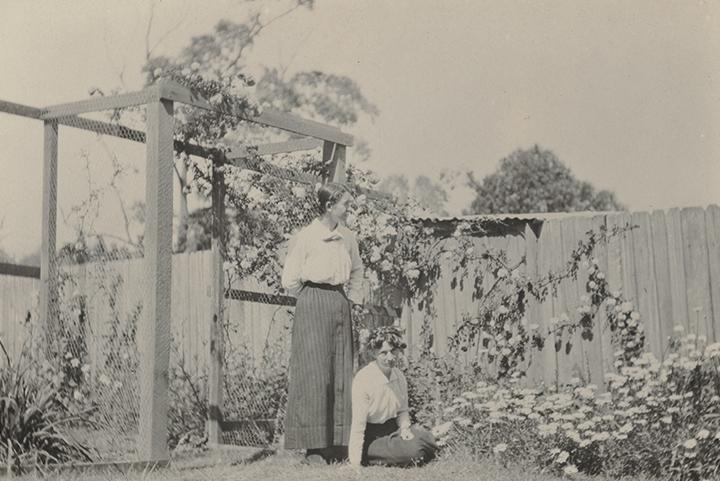 These two enterprising and energetic young New Women were keen to make a name for themselves as professional, independent women in Sydney’s lively artistic and cultural scene. Eirene’s first efforts to earn an income for herself were as a part-time teacher of art and design in a number of private girls’ schools. During her 30-year teaching career, Eirene taught in no less than ten exclusive girls schools, only four of which now remain: Abbotsleigh, SCEGGS Darlinghurst, Frensham and Kambala.

It was not long after Eirene returned from England that she found an alternative career path opening up, which appealed to her very much indeed: teaching and mentoring ‘amateur workers in the crafts’. Together with Nora, she set about establishing four successive studios from which they could give private lessons to adults and groups of children, and make and sell their wares. The studios were an important symbol of their role as professional New Women in Sydney society. Eirene’s mentoring provided additional income to her teaching of private school students. 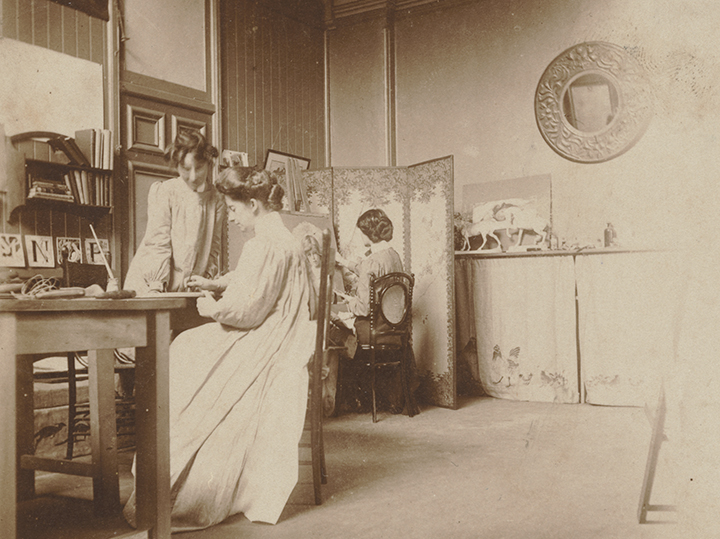 The timing of Eirene and Nora’s return to Sydney was serendipitous. For the previous two decades, Sydney had been experiencing a growth in artistic and cultural awareness. It had developed a love of ‘the beautiful’. Eirene’s passion for beautifying the homes of ordinary people with high quality, aesthetically pleasing and affordable artefacts (and for teaching others how to do so as well) found ready acceptance from Sydney’s middle-class women. Their business boomed. By 1910, editor and publisher A.G. Stephens estimated that there were ‘probably five hundred more women in Sydney who may be associated with her [Eirene] as comrades or followers, some of them in earnest’.

Eirene mastered no less than 44 different kinds of artistic media, ranging from etchings through tapestry and leatherwork to bookplates. In Eirene’s words, ‘The foundation of all artwork is good design. Without it, the cleverest craftsmanship is labour lost’. She added a plea to use Australian designs in Australian work: ‘all our bush is crying out … for its right to supplant the sprays of meaningless, blue daisies that are being painted on plates, cups and jugs of proportions and shape preposterous enough to break one’s heart’. 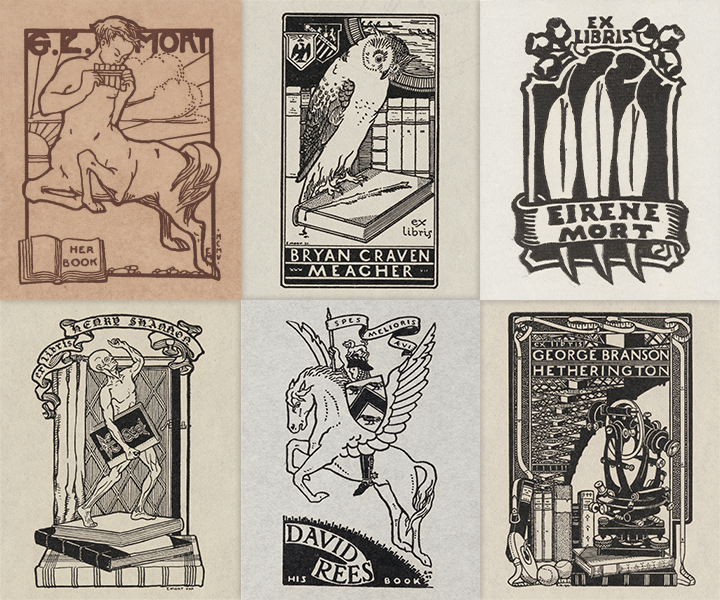 Eirene played a significant role in anticipating the profession of interior designer. Her emphasis on the importance of beautifying the home with ‘useful and beautiful’ artefacts not only focused women’s attention on interior spaces, but, I argue, prepared the way for her now better-known contemporaries (such as Margaret Preston, Thea Proctor and Grace Cossington Smith).

Eirene’s influence as an artist and artisan began to wane after the end of the Second World War as her style of art lost its trendsetting and popular status. Modernism began to gain popular acceptance, but Eirene had no love for that style of art. She continued her teaching career but supplemented it by undertaking a number of major and minor projects throughout the 1920s and 1930s. Retiring from teaching at the age of 59, Eirene moved to a rural property just outside Mittagong in New South Wales, remaining there with Nora until they moved to nearby Bowral in 1960. Eirene spent the next 40 years assembling her art work into beautifully compiled portfolios of pictorial records of her long life and documenting her family history. 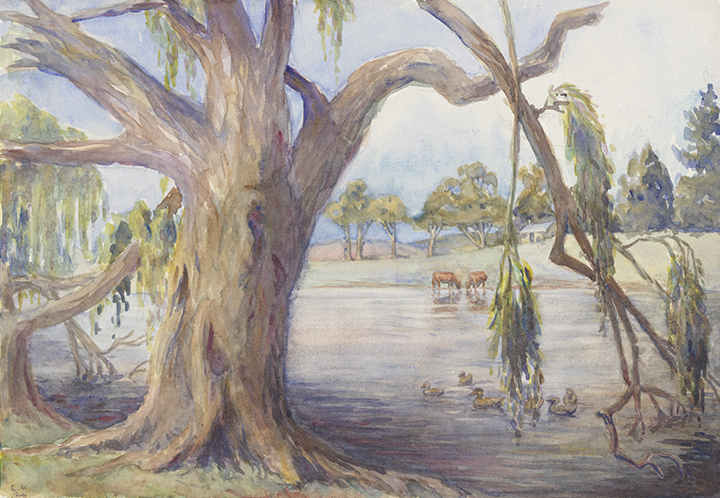 Eirene’s star may have burned brightly for only a brief period, but, during that time, she provided an exemplary model of an entrepreneurial, productive and independent artist, artisan and New Woman. Nora’s death in 1965, at the age of 85, and Eirene’s in 1977, aged 97, diminished the Australian art world. It is high time her contribution to Australian art and culture was recognised.

Pamela Lane is a retired teacher–librarian and literacy consultant. In 2018, she completed a Master of Philosophy in History at the Australian National University; her thesis was titled ‘Eirene Mort: Artist, Artisan and New Woman’. Her research was supported by an Australian Government Research Training Program Scholarship.