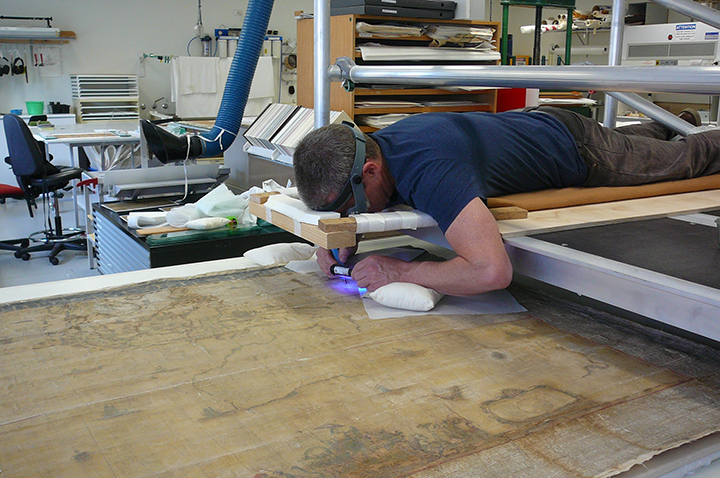 Conservator Peter Mitchelson wears an optivisor on a scaffold that supports his back and neck, custom designed in the Grimwade Centre facilities, while he removes the varnish from the surface of the Blaeu Map using a scalpel under UV light; image courtesy University of Melbourne

The epitome of Dutch cartography and the top commercial mapmaker of the Dutch Golden Age, Joan Blaeu was a leader in the production of huge and impressive wall maps, such as the Archipelagus Orientalis (Eastern Archipelago) acquired by the Library in 2013. Blaeu’s wall maps depicted provinces, countries, continents and the whole world, and were popular among a select clientele. However, few survive and there are no other Blaeu wall maps in any Australian library. Maps of this stature almost never come on the market, and the Archipelagus has the added value to Australia of being the template for all maps of New Holland or Australia, until Cook.

One of only four examples to survive intact, the Library’s Archipelagus was uncovered in a storage facility in Sweden, and sold at a small auction house in Stockholm in 2010, its significance initially overlooked due to the condition of the map. The original copper plates from which the map was made were created in 1659. The Library's example was pulled from the plates in 1663 with a banner title added. The map was coloured by the Blaeu publishing house in Amsterdam itself, its rich, gilded ‘a la carte’ colouring and colour palette much obscured by intervening years.

Adding to its charm, the map is surrounded by numerous text panels, which uniquely describe the East Indies and all their wealth, and some of the customs of local peoples. Scholar of Dutch cartography Prof Günter Schilder has described the map as one of the most important maps of the Dutch East India Company, and probably the best general map of Dutch sea power in South East Asia executed in the seventeenth century. In terms of Australian content, it is the earliest large-scale map of the Dutch discoveries and has all the mapping up to and including Tasman, at an unprecedented scale and level of detail.

Thanks to many generous donations, specialised conservation work has stabilised the map, its paper, inks and lining fabric. A major part of the work has been to investigate the verdigris, a brilliant blue-green pigment that was applied as a decorative element to embellish the surface of the map, but which had corroded. A team of conservators at the Grimwade Centre, University of Melbourne, also focused on removing the varnish from the surface, revealing many details thought lost. They worked section by section, carefully using a scalpel under an optivisor, which provided magnification, combined with a handheld UV light that highlighted the presence of varnish. The surface was cleaned using solvents in a gel to reduce any last traces of varnish and surface dirt, and fragile areas were consolidated before the map was humidified and pressed, allowing it to be mounted on a board for safe display and handling.

We are keen to display the map in our Treasures Gallery so we’ll be sure to let you know when you’ll be able to see it again.

Dr Martin Woods is the Curator of Maps at the Library and President of the Australian and New Zealand Map Society. Denyl Cloughley is the Library’s Assistant Director, Preservation and Project Manager for the conservation of the Blaeu Map.